With Facebook No Longer a Secret Weapon, Egypt’s Protesters Turn to Signal

With Facebook now closely monitored in Egypt, activists have been learning to use the encrypted messaging app Signal to communicate on the streets. 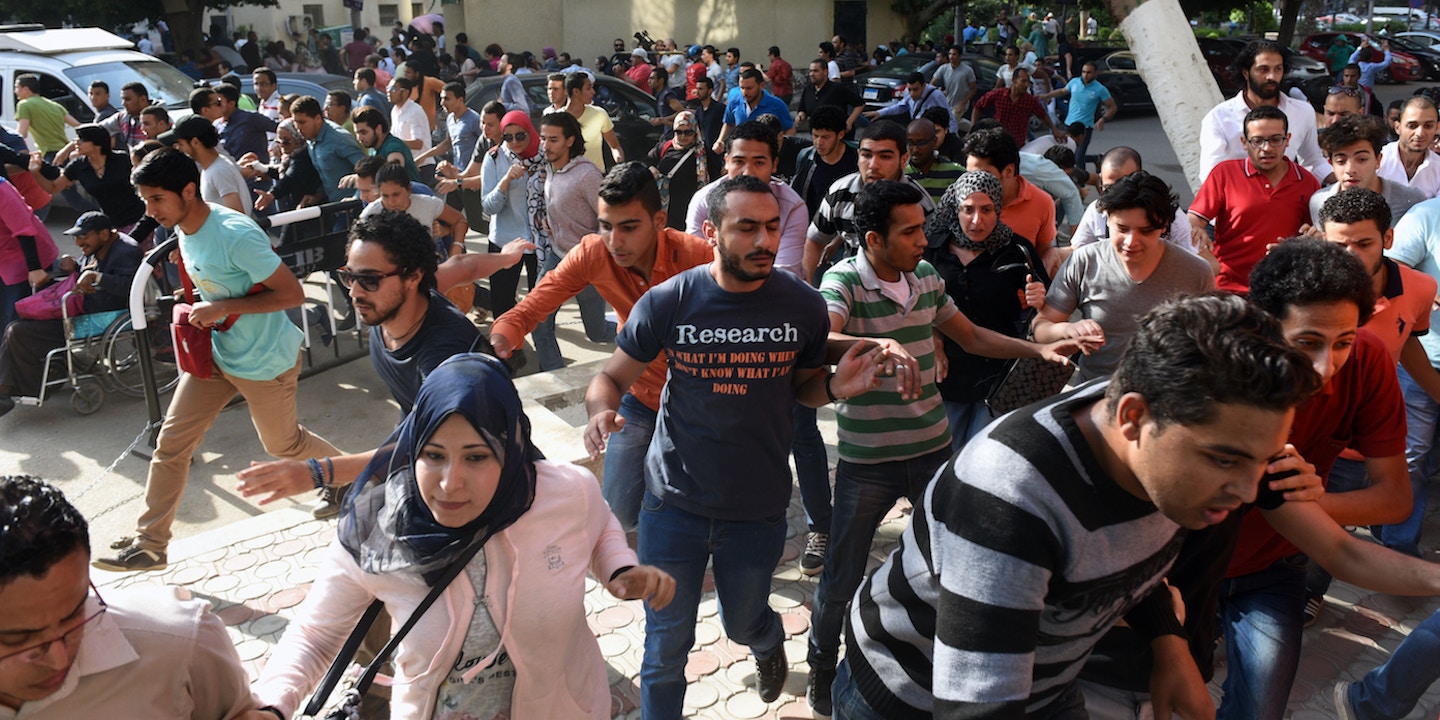 Although the police in Cairo sealed off parts of the Egyptian capital where protests scheduled on Facebook were to have taken place on Monday, opposition activists managed to stage brief rallies that resembled flash mobs, calling for an end to military rule and the cancellation of a deal to surrender two islands to Saudi Arabia.

Masaha Sq earlier before dispersal which lasted may be 5 minutes.. Many arrested #Egypt #april25 pic.twitter.com/XYoB4R0MoJ

The fact that Facebook is now so closely monitored by the security forces prompted one leading activist to offer an online tutorial in how to use a new tool, the encrypted messaging app Signal, to help protesters find each other on the city’s streets, and stay one step ahead of the authorities.

The heavy police presence wherever protests were planned seemed to indicate that the authorities can no longer be caught off guard by events organized on public social networks, as they were in 2011 when Facebook-driven protests led to the toppling of President Hosni Mubarak.

People are being rounded up near the places where protests are announced to be held in downtown and other areas..... https://t.co/5LZQXIbNb6

There was a time when political parties and groups used Facebook to post meeting points/times for marches. Mobilization much tougher now.

Concrete proof of the new dynamic could be seen outside the Journalists’ Syndicate in Cairo, where thousands of protesters had gathered 10 days ago and a Facebook group called Egypt Is Not For Sale had called for fresh demonstrations against the transfer of the uninhabited Red Sea islands, Tiran and Sanafir, to Saudi control.

Not only was the area off-limits to protesters on Monday, it was used to stage a pro-government dance party for a handful of President Abdel Fattah el-Sisi’s biggest fans, joined by flag-waving police officers.

Across the Nile, however, protesters unable to access the main rallying points suddenly appeared in Mesaha Square, a temporarily unsecured area of the Dokki neighborhood, and launched into chants against military rule and the transfer of the islands.

“They can lock down all the squares, but we will still find some street, some alleyway,” one young protester there told Kareem Fahim of the New York Times. “It is endless cat and mouse.”

Although the protesters did manage to evade detection long enough to assemble and make their voices heard, the police arrived within minutes to disperse the crowd, firing tear gas and shotgun pellets.

A short time later, the protesters appeared again on a nearby street.

By the end of the day, more than 200 people were reportedly detained, including dozens of journalists.

Scenes from Egypt's protests today remind Egyptians & the world that this is a govt committed to forceful repression to preserve its power.

pic of a young man holding a sign"The Land is Egyptian" taken just ments before he got arrested in Talaat Harb Sq pic.twitter.com/A5kMKA8rRb

The apparently haphazard nature of some of the arrests seemed to be illustrated by a brief video clip of one young man being pulled into a police van as he simply walked past it on a sidewalk.

Although secure messaging apps like Signal and WhatsApp do allow users to send some group chat messages, by their nature they are not as easy to use for public broadcast as Facebook or Twitter, which could hinder their usefulness as organizing tools for mass street protests.

A potentially more significant problem with the use of encrypted messaging apps by protesters hoping to avoid detection by the authorities is that just having the software on their phones could start to seem suspicious. There was some evidence of this in Cairo on Monday, with reports of the police searching the phones of protesters, and even scanning their Facebook and WhatsApp accounts.

Police are now going through people's phones and arresting some of them for their phone's contents. #Cairo

Another vulnerability dissidents in Egypt and elsewhere need to be aware of is that Signal, like Telegram, is activated by an ordinary, and easily intercepted, SMS text message to the phone of a new user. That means that it is technically possible for a phone provider, or a police surveillance unit, to know whenever a new user activates the service.

Frederic Jacobs, formerly a lead developer for Signal, pointed to this problem in a blog post in January about the dangers of using Telegram in Iran:

Most mobile messaging apps these days use SMS as a login technique. It’s really convenient because it doesn’t require the user to remember yet another username or identifier and telcos are taking care of the identity management such as re-assigning the phone number to you if you lose your phone.

In Egypt, there is evidence that the authorities have been intercepting password-reset codes sent to activists as part of the two-step verification process for other services, according to Ramy Raoof, a technologist, privacy and digital security consultant.

“As a user, if you forget your password for a particular platform, you can often recover your password by asking the platform to send a unique code to your mobile,” Roof wrote in a post for Global Voices earlier this month. “When you receive the code, you enter it in the platform as away of verifying your identity.”

“In Egypt, however, thanks to strong state control over telecommunications infrastructure, it appears that state actors have been using this feature to their gain,” he added. “They attempt to access activists’ accounts by selecting the “forgot password” option, and then intercept (or block) the code sent to the activist’s mobile phone. This allows them to rest the activist’s password and effectively take over his or her their account.”

As Orla Guerin of the BBC noted, the Sisi supporters were allowed to demonstrate unmolested, and harass foreign journalists, even as a law banning spontaneous rallies was used to arrest protesters in other parts of the city.

Supporters of President #Sisi in downtown Cairo - free to gather, unlike his critics who face huge crackdown pic.twitter.com/k4lB6TBMIM

Crowd of pro #Sisi supporters attacked and punched my #BBC colleague. He is ok. Uniformed cop made no effort to intervene #Cairo

Some of the most ardent government supporters seen on local television were familiar to viewers from previous rallies, including a woman who had achieved viral fame two years ago for an interview in which she scolded President Barack Obama for his supposed interference in the country’s affairs by saying, in fractured English: “Shut up your mouse, Obama! Sisi, yes! Sisi, yes!”

The "shut up your mouse Obama" lady went from viral hit to a regular feature of the pro Sisi troupe https://t.co/RJVTbfKwTF

Waving a Saudi flag at the center of a small pro-government rally on Monday in Cairo’s Talaat Harb square, the same woman was filmed saying that the Saudi king could have Egypt’s pyramids and the Sphinx as well.

Woman at pro-Sisi rally in #cairo: we'll give (saudi) King Salman Pyramids & Sphinx as well (as the islands). pic.twitter.com/0x9uiuOnhz

Suspicions that the government supporters might have been mobilized by the authorities were reinforced by reports that some of them were transported to Tahrir Square in police vans.

Not even discreet enough to use buses, but actual police trucks are transporting "Sisi supporters" to Tahrir Square. #Egypt #April25 1/2

As if to underline how much Egypt has changed since the end of the 2011 revolt, government supporters even rallied on Monday outside the window of the deposed president, Hosni Mubarak, who waved to fans from his hospital room at the Maadi military hospital in a Cairo suburb.