As Brasília’s Corruption Is Exposed, Lawmakers Try to Criminalize Dissent

Leaked secret audio recordings of Brazil’s most powerful figures have sparked a series of explosive scandals. Now, lawmakers are trying to outlaw their publication. 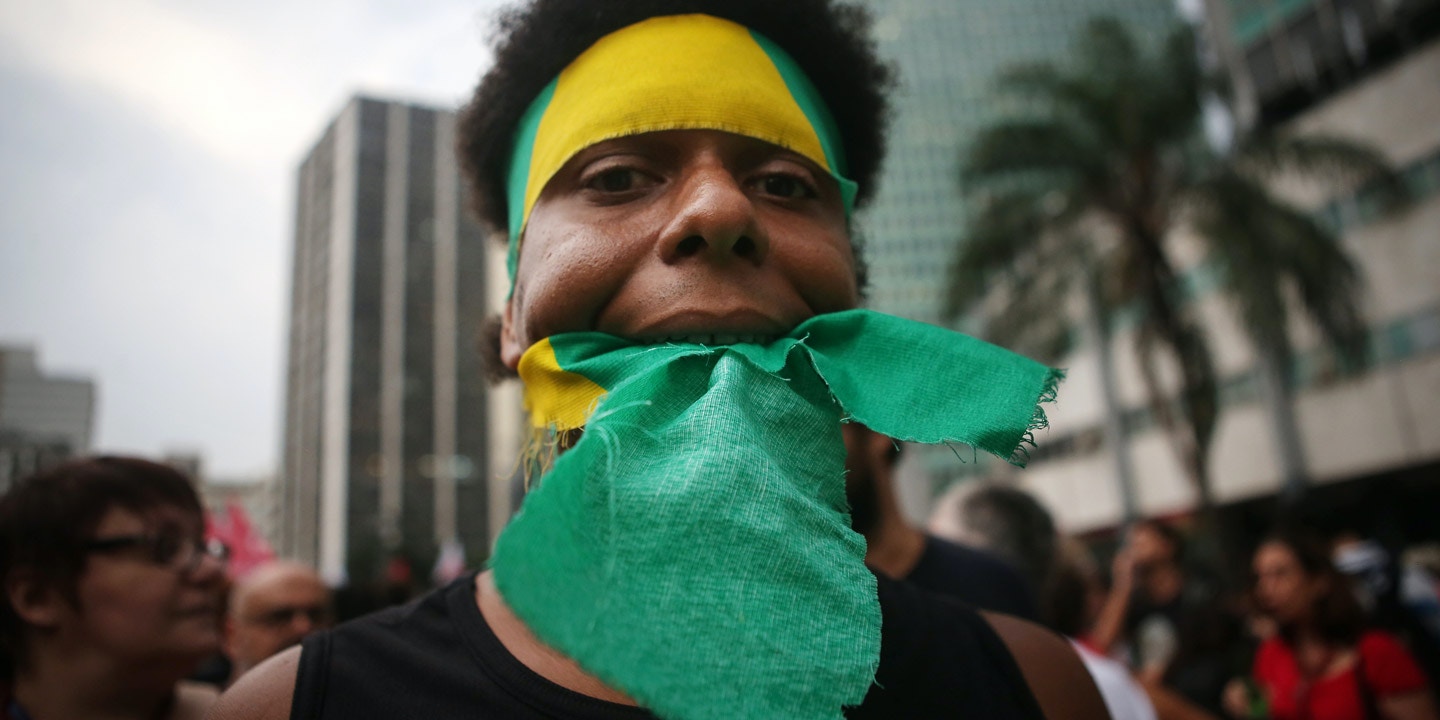 Leaked secret audio recordings of Brazil’s most powerful figures have sparked a series of explosive scandals in the nation’s ongoing political crisis. Now, Brazilian lawmakers are trying to outlaw publication of such recordings.

A bill, which has been idling since last year in the Câmara dos Deputados, Brazil’s lower house of Congress, has picked up new steam this month. The proposed legislation seeks to criminalize the “filming, photographing or capturing of a person’s voice, without authorization or lawful ends,” punishable by up to two years imprisonment and a fine. If the recording is published on social media, the penalty rises to four to six years.

When it was originally introduced, the bill was criticized as one of many proposed draconian measures designed to protect politicians and a direct threat to freedom of expression and the press.

The anti-recording bill was introduced in 2015 by Deputado Veneziano Vital do Rêgo, of interim President Michel Temer’s increasingly right-leaning PMDB party. Rêgo, who voted for the impeachment of now suspended Brazilian President Dilma Rousseff, has reason to fear being secretly taped: He is a suspect in 35 pending investigations for various financial and administrative crimes, as of April, according to Transparência Brasil, a leading anti-corruption watchdog, and the fact-checking website Agência Lupa.

The Institute for Technology and Society of Rio de Janeiro, which called the bill “troubling” and “unbelievable,” said the law would criminalize such everyday activities as filming a birthday party and posting it on social media. On Medium, the institute wrote that the bill “prevents journalistic and investigative activities of great significance and endangers anyone who performs audiovisual activities. It is an unconstitutional bill, which violates the freedom of expression and other constitutional principles such as the right to information and prerogatives of the media.”

The bill would not block the federal police’s use of secret recordings, but would prohibit any recording — secret or open — conducted without full consent and not produced in “the public interest,” a subjective term that would likely be left to the discretion of judges.

This week, leaked recordings revealed the president of Association Magistrates of Paraná state secretly coordinating retaliatory legal actions against journalists who reported on judges’ inflated wages. Brazilian courts have also ordered Marcelo Auler, an independent journalist, to take down 10 articles reporting on leaks and illegal wire taps related to Operation Car Wash, the ongoing corruption probe, and banned him from publishing any future reporting on the subjects.

With six years of prison at stake, the law would have a massive chilling effect on all media organizations and independent publishers.

The bill would not threaten journalism “because to quote, film or record a citizen, a professional journalist first has to ask their permission and authorization to publish the material,” Dep. Rêgo’s office wrote in an email to The Intercept.

In a statement to The Intercept, the board of directors of the Brazilian Association of Investigative Journalism said that “the bill amounts to a setback by creating new criminal offenses which journalists may incur in the performance of their duties,” adding, “the criminalization of libel, slander and defamation is a risk to democracy.”

The bill also includes a controversial “right to be forgotten” proposal that would allow individuals to demand, “independent of a judicial order,” that search engines and websites take down and remove from search results content that “compromises one’s honor.”

New momentum for Rêgo’s bill comes as secret recordings have threatened the core of the new government of interim President Michel Temer. On Tuesday, Brazil’s largest newspaper, Folha de Sao Paulo, reported that the prosecutor general has requested the arrest of Senate President Renan Calheiros, ex-President José Sarney, and close Temer confidant Sen. Romero Jucá — all key leaders of Temer’s party, the PMDB. Jucá and another Temer ally were forced to resign their ministries late last month. An important senator from President Dilma Rousseff’s Workers’ Party, the PT, briefly went to jail last year in a similar incident. Rousseff herself was caught in a wiretapped conversation with ex-President Lula da Silva discussing his appointment as a government minister, which opponents viewed as evidence that they were trying to put him out of the reach of the Operation Car Wash corruption investigation, sparking protests.

Other proposed legislation includes a plan to restrict the use of plea bargain agreements with suspects in custody and another to curtail selective leaking from investigations — both introduced recently by PT lawmakers. More than 200 bills addressing corruption were introduced in 2015 — five times the average — and, according to O Globo newspaper, “the bills that pass more quickly are precisely those which may create difficulties for investigations or build in mechanisms that mitigate punishment.”

A representative from Rêgo’s office told The Intercept that the bill is meant to protect rape victims, “not just politicians.” After videos and images of the horrific gang rape of an unconscious, 16-year-old girl in Rio de Janeiro spread online and made international headlines, the subject of unauthorized recordings has gained substantial public attention. Rêgo is optimistic that the bill, currently scheduled to be discussed in committee on June 15, will pass through the technology and justice committees of the Câmara dos Deputados, after which it would go to a vote in the Câmara and Senate.

In April, a hidden listening device was discovered in the office of a supreme court justice; its origins are still unknown. And, with so many individuals implicated in corruption investigations, according to Folha de São Paulo, the climate of paranoia among Brasília’s power brokers is now so intense that meetings are being conducted without cellphones or suit jackets, sometimes with the blinds shut and music playing in the background to defeat various types of listening devices — measures reminiscent of a gangster film.

This week, top executives from the Odebrecht construction firm reportedly promised to open the books on 500 million reais ($149 million) in illegal campaign contributions and kickbacks since 2006 as part of a plea bargaining agreement. Senate President Calheiros said in a secret recording that if that were to happen, “nobody from any party would escape.”