British Politics Descends Into Nativism and Farce, and Trump Hasn’t Even Arrived Yet

Britons who want to leave the European Union have been relying heavily on anti-immigrant hysteria to make their case. With just over a week to go before Britons vote on whether or not to leave the European Union, the campaign for “independence” from the EU has turned farcical and deeply nasty, with nationalists relying heavily on anti-immigrant hysteria and racism to make their case.

And it turns out that Donald Trump has chosen next Friday, June 24 — the day the referendum votes will be counted — to visit his mother’s ancestral homeland, Scotland. Trump’s avowed purpose is to celebrate the reopening of a golf resort he owns there, but the timing suggests he may be hoping to be on hand to cheer the success of a reactionary political movement based on the same sort of appeals to nativism and xenophobia that have served him so well in America.

Let's put the Great back in Britain, Leave EU! pic.twitter.com/B7yeJ6cX0D

As the writer Alex Massie observed in a column for The Spectator on Wednesday, what seems to drive many of the anti-EU voters is “a much more narrow conception of Britain and Britishness than the one I find attractive.”

“A conception that thinks Britain is broken,” he continued, in terms that will sound familiar to anyone who has heard Trump speak, “that she has been betrayed, that there is something dismal about the modern world, that something has been stolen from them, that so many of the things that make Britain a success — its relaxed and liberal internationalism — are instead signs of failure and national capitulation.”

The Leave campaign, led by a former mayor of London with aspirations to be prime minister, and the head of the United Kingdom Independence Party, or UKIP — which is something like the British version of the Tea Party movement— has been accused of overt racism in its appeals to white working-class voters, which focus heavily on the supposed threat to traditional values posed by an influx of swarthy foreigners, particularly Muslims.

That was quite apparent in an editorial cartoon shared on Sunday by the campaign for a British exit, or Brexit. The cartoon showed the British escaping in a lifeboat marked Brexit from the EU ship of state, which was heading for disaster while beset by violent, money-grubbing, sexually depraved pirates with dark skin, beards, and turbans.

A brighter future awaits us outside the EU. #LeaveEU pic.twitter.com/V98bUMMsWE

Clicking twice on the image to look more closely at a larger version reveals other details that are even more clearly racist. To start with, the ship is at risk of imminent disaster in part because one member of its crew is punching holes in the deck by firing a cannon that is marked “Diversity.”

The ship also flies, above its EU sail, what looks like the flag of Pakistan. Informed readers will be aware that Pakistan is neither in Europe nor a member of the European Union. There are more than a million Britons of Pakistani origin, but the migration of these families had nothing to do with the EU, because Pakistan is a member of the Commonwealth, which unites former imperial possessions with the United Kingdom.

More significantly, as Philip Stephens of the Financial Times observed last week, there is the Leave campaign’s recent focus on making the false claim that Turkey is about the join the union.

Flick through the campaign material of the Brexiters fighting Britain’s EU referendum and you will find a video of a brawl in the Ankara parliament. Next, a poster with an image of a U.K. passport declaring that “Turkey (population 76m) is joining the EU.” Then statistics about Turkey’s high birth rate; and a warning that Britain’s National Health Service will soon be swamped by expectant Turkish mothers.

After this follows the assertion — unsubstantiated, of course — that Turkey has higher levels of criminality and gangsterism; and a map showing that Ankara’s supposedly imminent accession will extend Europe’s external frontier to war-ravaged Syria. None of this needs decoding. The dog whistle has made way for the klaxon. EU membership talks with Turkey, we are to understand, will soon see Britain overrun by millions of (Muslim) Turks — most of them thugs or welfare scroungers.

In reality, although Turkey has been in talks to join the European Union for decades, there are enough obstacles in place — including its rivalry with two member states, Greece and Cyprus, and the authoritarian bent of its president, Recep Tayyip Erdogan — that no one involved in those talks expects it to take place for, at least, decades more.

Nonetheless, the Leave campaign’s leaflets, billboards, and social media ads proclaim that Turkish membership is a done deal, so Britons would be well-advised to flee while they still can.

It is official Government policy for Turkey to join the European Union #EUDebate #VoteLeave pic.twitter.com/AppgHfTaHp

Perhaps attempting to pivot away from overt fear-mongering and racist messaging, a leader of the Leave campaign, Nigel Farage, sought to invoke Britain’s glorious past as a naval power, and win the votes of fishermen, by leading a flotilla of flag-draped boats up the River Thames on Wednesday to the House of Commons.

This is the Brexit boat that Nigel Farage will be sailing down the Thames. Note patriotic balloons and ???????? deckchairs pic.twitter.com/3KmidxzTsR

The photo-op somewhat backfired when members of the campaign to stay in the EU, led, improbably, by Sir Bob Geldof, the Irish rocker and social activist, appeared in a flotilla of their own to jeer the nationalists over a very loud sound system. 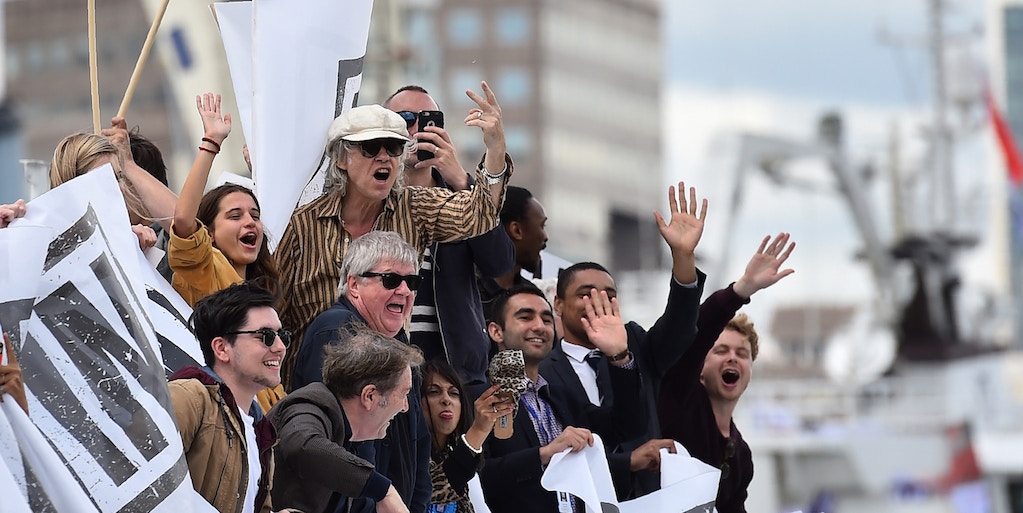 During a confrontation between campaigners for and against the European Union in London on Wednesday, Bob Geldof made a rude gesture at a boat filled with pro-Brexit nationalists.

Images of the confrontation, and jokes about the farcical nature of the mock naval battle, soon appeared on social networks, prompting remixes and memes.

Increasingly think Bob Geldof is preparing to board Farage's boat. Thames is a total mess. The hell is happening. pic.twitter.com/UbqDIaN9Js

Well we're outside parliament and Geldof's circling and people are swearing at each other and trawlers are here. So. pic.twitter.com/F3sh4zkSsJ

Seems Farage's flotilla has been joined by the in crowd! Farage is no fishermen's friend pic.twitter.com/B4HWcvr8ec

"I'd like to add you to my professional network on LinkedIn" pic.twitter.com/9NSPp40Mho

Nigel Farage has retreated to other end of his boat but his interviews utterly drowned out by Geldof's loudspeakers pic.twitter.com/NlEKqDITz9

UPDATED WITH THEME TUNE: The state of British politics summed up in a clip of a flotilla face-off pic.twitter.com/wK9PKylmJN

It's just like Dunkirk, if Dunkirk had consisted of 30 idiots having a pub argument. #flotilla pic.twitter.com/RuBRukmOI9

Even Americans are laughing at us #flotilla