Iceland’s Soccer Team Is Great, Its Treatment of Asylum Seekers Less So

While Iceland’s sporting success has earned the nation affection on social networks, the government’s expulsion of asylum seekers is disturbing. The improbable success of Iceland’s national soccer team, which beat England this week to advance to the quarterfinals of the European Championship tournament in France, has generated a warm glow around the tiny island nation and an eruption of jokes and memes online.

Some of those revolve around the feats of the players; others focus on the winning behavior of the team’s traveling fans — about 10 percent of the country’s entire population — whose signature war chant evokes a Viking tribal gathering (even if it is actually borrowed from a club in Scotland).

Then there are the pure shouts of delirium from the state broadcaster’s match commentator, which have made him an internet folk hero, and the fact that the team’s co-manager is on hiatus from his other job as a dentist.

If you don't belive Heimir Hallgrimsson Iceland manager is also a dentist. Here is our proof. #ISL #EURO2016 pic.twitter.com/is0GnBm8Zq

While everyone was marvelling over Iceland's success yesterday 2 Iraqi asylum seekers where dragged out of a church by police. #refugees

That footage, recorded by Thorgeir Helgason, a journalist for the news site Stundin, showed the quietly brutal arrest of two Iraqi asylum seekers who were dragged from a church where they had sought refuge.

Some of the facts of the men’s case were in dispute, like whether the younger of the two was 16 or 19, but the legal grounds for their detention and expulsion from the country was clear. The men, identified in the local press by their first names, Ali and Majed, arrived in Iceland seven months ago after first applying for asylum in Norway. So, despite asking for permission to stay in Reykjavik, where there is a small community of Iraqi refugees, they were deported in accordance with a European agreement known as the Dublin Regulation, which requires anyone fleeing persecution in another part of the world to stay in the first European country they reach. The terms of that agreement excuse Iceland from having to even investigate the claims of those who say they are fleeing persecution in their home countries. 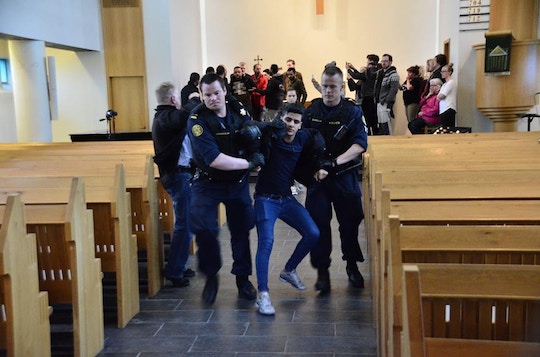 An Iraqi asylum seeker was dragged from a church in Reykjavik on Tuesday.

Jóhann Páll Jóhannsson, another Stundin journalist who reported on the raid on the church at about 4 a.m. Tuesday morning, confirmed to The Intercept that the Iraqis had spent their last night of freedom like almost everyone else on the island, glued to the television coverage from France, cheering for Iceland’s soccer team.

Toshiki Toma, the Lutheran Church of Iceland’s pastor for immigrants, told The Intercept by phone that the two men, who converted to Christianity last week, were jailed on their return to Norway and now expect to be returned to southern Iraq, which is considered safe by Norwegian authorities.

Toma, a native of Japan who has lived in Iceland for more than 20 years, said that he and Kristín Tómasdóttir, the parish priest at Laugarneskirkja church in Reykjavik, had received permission from the Bishop of Iceland to offer shelter to the two men in the hope that the police would respect the ancient tradition of treating houses of worship as places of sanctuary.

Tómasdóttir told the state broadcaster RUV later that those gathered to support the Iraqi men were shocked to see them dragged from the church by force. “Our goal,” Tómasdóttir added, “is to try to put pressure on and to reach the ears of those who truly are in power and who shape policy and work methods regarding foreigners in Iceland and those who seek international protection here.”

After footage of the two men being dragged from the church was broadcast on the evening news, a right-wing radio host, Arnþrúður Karlsdóttir, speculated on the air that the Iraqis might have come to Iceland to start a cell for the Islamic State militant group and called for Tómasdóttir to be fired for interfering with the work of the police. A spokesperson for Iceland’s immigration authority confirmed to the local media that there was no evidence at all to support Karlsdóttir’s theory. The Radio Saga host has previously claimed, without evidence, that there are known ISIS members among Iceland’s small Muslim population, and even posted a photograph of herself wearing a makeshift niqab in the studio on the station’s Facebook page, suggesting that this might be a vision of the nation’s future.

“The Dublin Regulation gives signatory nations the authority — although not the obligation — to deport asylum seekers back to their previous point of departure,” Paul Fontaine observed in the Reykjavík Grapevine. “Iceland regularly invokes the regulation, more often than not without examining the merits of an asylum seeker’s case.”

Iceland has detained and expelled 131 asylum seekers so far this year — including a Nigerian man, Eze Okafor, who said he was forced to leave his home due to persecution by Boko Haram militants who had killed his brother in 2010.

Okafor had been living in Iceland for four years and working in a local restaurant until May, when the authorities invoked the Dublin Regulation and sent him back to Sweden, where he had first asked for asylum.

In a video interview posted on Facebook by the Icelandic group Ekki fleiri brottvísanir, or No More Deportations, Okafor said that he still hoped to return to Iceland but had been ordered to return to Nigeria by the authorities in Sweden or face forcible expulsion.

Top photo: Ali Nasir, a teenager from Iraq, was handcuffed by Icelandic police officers on Tuesday outside a church in Reykjavik where he and a friend had sought sanctuary.

This column was updated to note that the Stundin video was shot by Thorgeir Helgason, not Jóhann Páll Jóhannsson, who wrote about the arrest of the Iraqi men.