Missing from the Chilcot report are allegations of systemic abuse by British soldiers — accusations that are currently being considered by a domestic investigative body as well as the ICC. 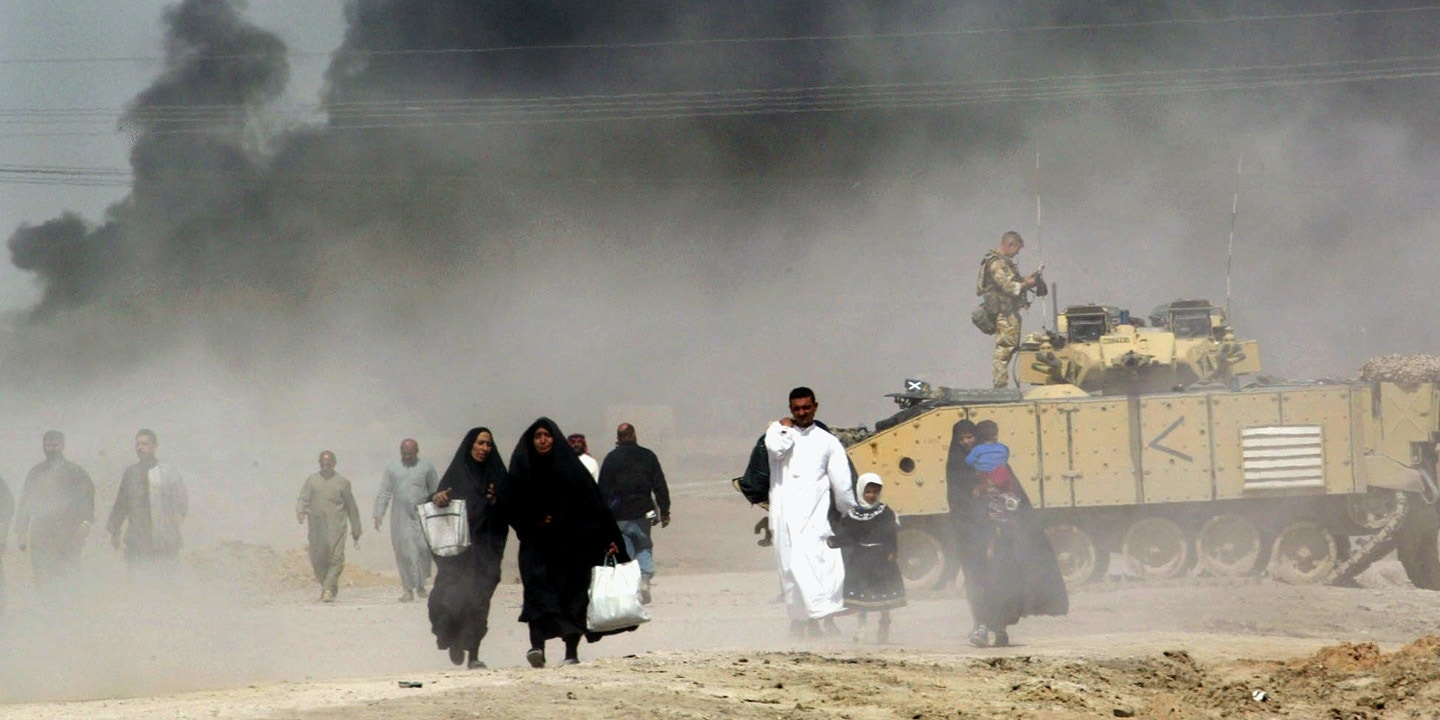 The long-anticipated Chilcot inquiry into the Iraq War released Wednesday contains stinging indictments of Britain’s role in the U.S.-led invasion, detailing failures starting with the exaggerated threat posed by Saddam Hussein through the disastrous lack of post-invasion planning. An element conspicuously missing from the report, however, are allegations of systemic abuse by British soldiers — accusations that are currently being considered by a domestic investigative body as well as the International Criminal Court.

The claims center on alleged violations committed against Iraqis held in detention by British soldiers between 2003 and 2008. Based on the receipt of a dossier outlining numerous incidents, ICC prosecutor Fatou Bensouda in 2014 reopened a preliminary examination into abuse allegations. The same examination, a step below an official investigation that could yield court cases at The Hague, had initially been closed in 2006 for lack of evidence.

Presented to the court by the British firm Public Interest Lawyers and the Berlin-based European Center for Constitutional and Human Rights, the January communication was followed up by a second batch of cases in September 2015, submitted by Public Interest Lawyers. By November of last year, the ICC reported that it had received 1,268 allegations of ill treatment and unlawful killings committed by British forces. Of 259 alleged killings, 47 were said to have occurred when Iraqis were in U.K. custody.

Both Public Interest Lawyers and a separate firm, Leigh Day, which has helped plaintiffs bring hundreds of parallel civil cases, have a long and tangled history with the British government. They face ongoing criticism for employing agents in Iraq to gather clients in the country and have them sign witness statements, and have been confronted with possible penalties for alleged improprieties during previous British inquiries.

According to a December Freedom of Information release, the government has already settled 323 cases, totaling some 19.6 million pounds. Citing confidentiality clauses, the British government did not in that response offer breakdowns by type of complaint — for instance, the number of settlements for deaths or serious injury.

“The MOD [Ministry of Defense] doesn’t settle unless there’s good cause — that’s the fairest assumption,” said Andrew Williams, professor of law at the University of Warwick. “One would think that with almost 20 million pounds and 300 cases you are settling some significant allegations.”

Warwick is the author of an account of the killing of Baha Mousa, an Iraqi hotel receptionist who died while in the custody of British soldiers in September 2003. That case led to the sole prison sentence handed to a British soldier for war crimes during the occupation of Iraq. Skirting charges of manslaughter, Cpl. Donald Payne pleaded guilty to the inhumane treatment of Mousa — who suffered 93 injuries while in custody before his death — and served just one year in prison. All other members of the British military tied to the case were acquitted.

Domestically, an investigative mechanism called the Iraq Historic Allegations Team has fielded 3,363 cases since it was founded in 2010, including 325 that involved unlawful killings. According to recent figures obtained by The Guardian, a further 1,343 stem from allegations of ill treatment. Public Interest Lawyers says all the cases sent to the ICC have also been provided to IHAT.

In a rare interview, given to The Independent in early January, the investigative unit’s chief, Mark Warwick, said his team was reviewing “serious allegations,” including homicide, “where I feel there is significant evidence to be obtained to put a strong case before the Service Prosecuting Authority to prosecute and charge.”

But it remains unclear how long those investigations will take, or how many British nationals may eventually face charges. A more important question, said Clive Baldwin, senior legal analyst at Human Rights Watch, is whether high-ranking officials will face charges. As Baldwin estimates, no senior British politician or military officer has been put on trial for the crimes of their subordinates since 1651.

“Commanders who know or should have known and failed to take measures to prevent abuses can be criminally liable,” said Baldwin. “None of the criminal investigations in the UK have attempted to address this.”

The Iraq Inquiry, led by chairman John Chilcot, decided it was unequipped to tackle individual cases of abuse. The inquiry wrote that it “did consider whether it might examine systemic issues related to the detention of military and civilian prisoners” but ruled against that in light of continuing “inquiries and investigations,” including those being conducted by IHAT.

“Government will consider its findings carefully, and there will be a chance to study and debate the findings in depth,” the Ministry of Defense said in a statement. “We will ensure that lessons are learnt and acted on.”

It is precisely that systemic nature that human rights officials fear could be brushed under the rug, as it has been historically. On November 18, shortly after the ICC released its annual report on preliminary examinations, Catherine Adams, the legal director at the U.K.’s Foreign and Commonwealth Office, told a meeting of ICC member states that the British government “rejects the allegations that there was any systemic abuse by British forces in Iraq.”

Bensouda, the ICC prosecutor, has said she would consider the contents of the report, as well as the results of the Iraq Historic Allegations Team. In line with its mandate, if domestic accountability measures are determined to be lacking, the ICC could begin an official investigation. But that has always been seen as a distant possibility for powerful Western countries like the U.K.; in its history, the court has never brought charges against any individual outside of Africa. The ICC has no jurisdiction over alleged American abuses committed in Iraq, as neither the U.S. nor Iraq is a member. The U.K. is, however.

On Monday, Bensouda issued a statement in response to a Telegraph article that claimed only soldiers, and not former Prime Minister Tony Blair, could be prosecuted for war crimes. That interpretation was “inaccurate,” said Bensouda; while the court does not yet have jurisdiction over “the crime of aggression” and “the specific question of the legality of the decision to use of force in Iraq in 2003,” it does have remit over war crimes, crimes against humanity, and genocide, she wrote, and refused to rule out prosecuting anyone, including Blair, for such violations.

The evidence presented to the ICC by Public Interest Lawyers includes allegations that likely would constitute war crimes. In one case, British forces arrived late at night at the home of a 43-year-old man in Basra. According to the claim, the man was separated from his family, including his wife; his 17-year-old son was “taken into a separate room, beaten, and handcuffed.” Soldiers then allegedly spent half an hour searching the house, destroying furniture and belongings. When his wife returned to the room, she found her husband “dead and covered with a blanket. He had been shot in the head.”

Other allegations include prolonged beatings by soldiers, stabbings, and sexual assaults. One detainee account recounts being raped by British personnel, who forced themselves into his mouth. “Each time he was raped he was hooded but he saw the soldiers before they raped him and each time it was different soldiers,” wrote lawyers summarizing the claim. Another man, arrested just after the invasion in March 2003, said during some periods of detention “he was raped or sexually assaulted every two hours.”

It’s uncertain if claims like these can be proven more than a decade after they allegedly took place. In its most recent quarterly update, IHAT reported that it had closed or was near to closing investigations into 59 allegations of unlawful killing. In 56 of those cases, the complaint was deemed “not sustainable” and unfit for referral to prosecutors. In May, the British Supreme Court threw out the claims of 600 Iraqis who alleged they had been unlawfully detained or mistreated by U.K. armed forces during the occupation. Citing Iraqi law, the court ruled that too much time had passed since the incidents in question.

With so much up in the air and eight years since the departure of British troops, Williams said the inquiry might have done better to at least address the question of systemic abuse.

“If you’re looking at accountability in terms of any abuses that took place against Iraqi civilians during the U.K. engagement in the occupation, the Chilcot inquiry has nothing to say,” said Williams. “They never asked those questions, so it’s not surprising that they didn’t offer any answer.”

Top photo: Iraqis pass a British tank as they flee Basra, in southern Iraq, as smoke looms over the city in the distance, March 29, 2003.