Melania Trump Remarks on Her Values Plagiarized From Michelle Obama

Melania Trump was the star of the convention’s first night, until someone compared her speech to the one Michelle Obama gave on the same occasion in 2008. 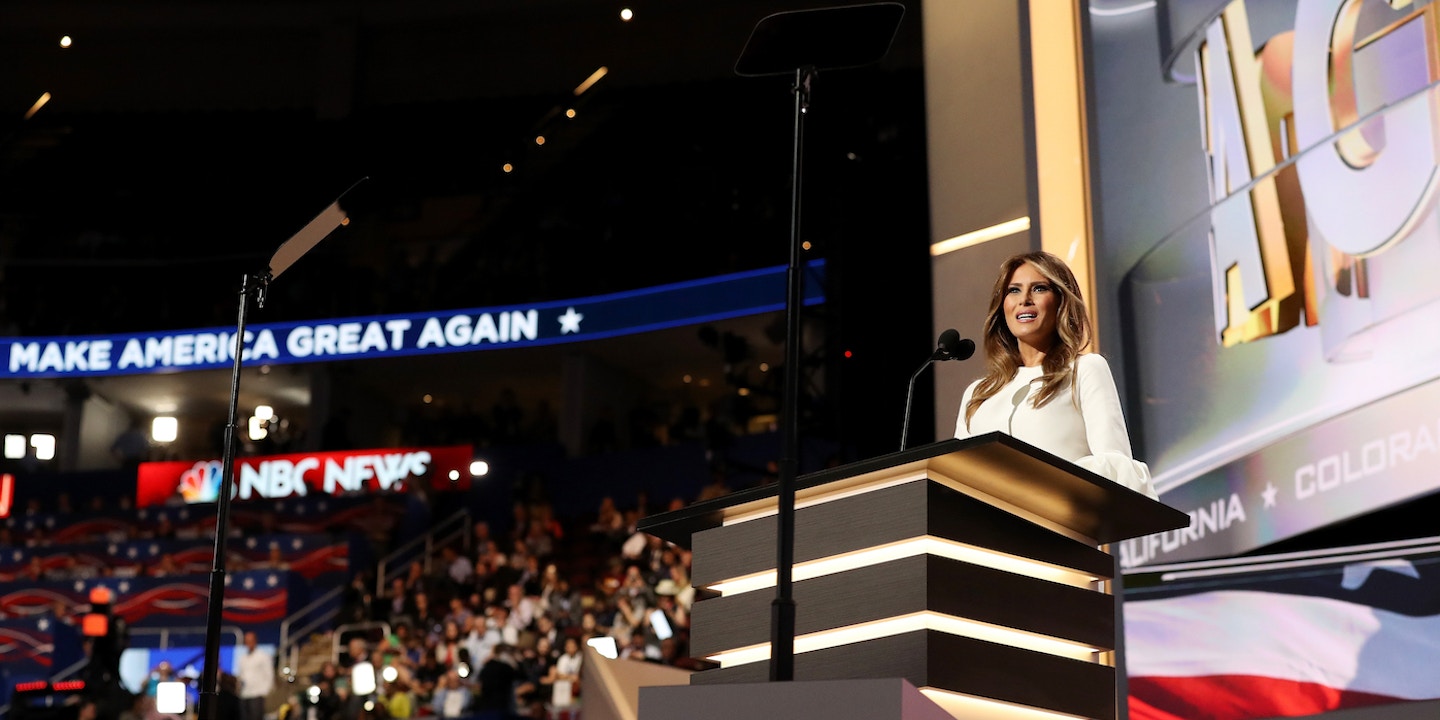 A central portion of Melania Trump’s speech to the Republican National Convention on Monday night, about the core values her parents instilled in her and her sister as children, seems to have been lifted almost word for word from the speech Michelle Obama gave on the first night of the 2008 Democratic National Convention.

Speaking about what she learned from her parents, Trump said:

From a young age, my parents impressed on me the values that you work hard for what you want in life; that your word is your bond and you do what you say and keep your promise; that you treat people with respect. They taught and showed me values and morals in their daily life. That is a lesson that I continue to pass along to our son, and we need to pass those lessons on to the many generations to follow because we want our children in this nation to know that the only limit to your achievements is the strength of your dreams and your willingness to work for them.

While the wife of the Republican candidate impressed most cable news anchors and pundits with her supposedly autobiographical address, the passage about ambition and hard work immediately sounded familiar to Jarrett Hill, an interior designer and television producer. Writing on Twitter, Hill highlighted the close similarity of some of Trump’s language to that used by Obama.

When he looked again at the transcript of the current first lady’s speech, he discovered that not just a few words, but the whole section appeared to have been borrowed from the earlier speech.

Given that video and transcripts of the two speeches are widely available, remixes comparing them quickly followed, along with an outpouring of mockery.

I taught speech for ten years. Even my worst students would not have done this: https://t.co/QhPPC8ENUA pic.twitter.com/co5VveF5cq

Sarah Hurwitz, Michelle's head speechwriter, used to be Hillary's. So the Trump campaign plagiarized from a Hillary speechwriter.

Hello, it's not just about plagiarism. Melania plagiarized the portion about VALUES. #cantmakethisup #RNCinCLE

One place that video of Trump’s speech seemed to be missing was on the convention’s YouTube channel, even though it did feature her husband’s campy appearance to introduce her — which he did to the strains of Queen’s “We Are the Champions,” despite the fact that the band has threatened to take legal action to keep him from using the song.

An unauthorised use at the Republican Convention against our wishes - Queen

To make matters worse, the convention’s official channel later added a clip titled “Melania Trump” that omitted her entire speech and just showed Donald Trump returning to escort her off the stage.

In an interview with NBC News just before delivering the speech, Trump said that she had not worked too hard on memorizing her lines “because I wrote it — with a little help.”

After the convention speech karaoke became the night’s leading news story, a campaign spokesperson, Jason Miller, said in a statement that Melania Trump’s “team of writers took notes on her life’s inspirations, and in some instances included fragments that reflected her own thinking.”

Earlier in the day, Julia Ioffe, who wrote about the former Melania Knavs for GQ, pointed out that the convention program notes incorrectly referred to the candidate’s wife “obtaining a degree in design and architecture at University in Slovenia” before she went into modeling.

RNC notes say Melania Trump received degree in design. False. She dropped out after a year, but campaign keeps talking about her degree.

As Michelle Broder Van Dyke reported for BuzzFeed, last year Donald Trump suggested that he would have nothing to fear in a hypothetical match-up against Joe Biden since the vice president had been forced to drop out of the race for president in 1988 after a rival campaign leaked video evidence that he had plagiarized an autobiographical passage from a speech by the British Labour leader Neil Kinnock. “I think I’d match up great,” Trump said. “I’ve had a great record. I haven’t been involved in plagiarism.”

At the time, criticism of Biden had been particularly withering because of the fact that he had borrowed details from Kinnock’s family life and passed them off as his own.

Biden’s plagiarism was quickly invoked by Trump’s defenders on social networks, although the fact that it was considered important enough to force him from that race, and he spent two decades rebuilding his reputation before running again, was less discussed.

If you want to play that game. Go ask Joe Biden about plagiarism. And he was running for President. Not a housewife.

Trump supporters pointing to Biden's plagiarism scandal as cover do realize that he ended up dropping out of the presidential race, right? ????

Later Tuesday morning, Chris Christie appeared on NBC as a surrogate for the Trump campaign with a novel defense. Asked, as a former federal prosecutor, if Melania Trump’s speech could be called plagiarism in court, he said, “Nah, not when 93 percent of the speech is completely different than Michelle Obama’s speech.”

Plagiarism?
"Not when 93% of the speech is completely different than Michelle Obama’s speech." -@GovChristie https://t.co/C280sUME33

A review of a nearly complete transcript reveals that Trump’s discussion of her family’s values made up about 12 percent of her 1,350-word speech, but just over half of it employed the exact phrases used by Obama. Christie went on to blame the media for making too big a deal of the nearly identical 7 percent. Bizarrely, among those who adopted the same argument in defense of the prospective first lady was someone with access to the Department of Justice’s Twitter feed — where a link to a CNN report on the plagiarism was posted along with a comment describing the cable news network as a troll and the hashtag #Petty.

The update was quickly removed after it was retweeted by followers who, happily, made screenshots first.

The New York Times reported that, according to two unnamed anonymous sources, “a contract speechwriter, Matthew Scully, had written an early draft of Ms. Trump’s speech several weeks ago.” Scully, whose contributions to history include coming up with the last word of the phrase “axis of evil” for George W. Bush, was likely paying close attention to Michelle Obama’s address to the 2008 Democratic National Convention, since he was then drafting Sarah Palin’s mean-spirited acceptance speech at the Republican National Convention the following week.

After word of Scully’s involvement in the drafting of the speech came to light, NBC News reported that it had “obtained a copy of Scully’s draft as submitted to the campaign” and “the passages that appeared to have been plagiarized from Mrs. Obama were added at some point after Scully turned in his draft.”

The uproar over the speech came one day after Tony Schwartz, the journalist who wrote The Art of the Deal in Donald Trump’s voice, spoke of his regret in an interview with Jane Mayer of The New Yorker. Trump disputed this, telling Mayer, “I wrote the book. It was my book.” However, Howard Kaminsky, the head of Random House at the time the book was published, laughed when presented with that claim. “Trump didn’t write a postcard for us!” he told Mayer.

Still, Trump often refers to himself as the author of that book on the campaign trail, where he has also boasted about his great command of the English language.