In a show of disunity at the Republican National Convention, Ted Cruz was jeered by delegates as it became clear he had no intention of endorsing Trump. 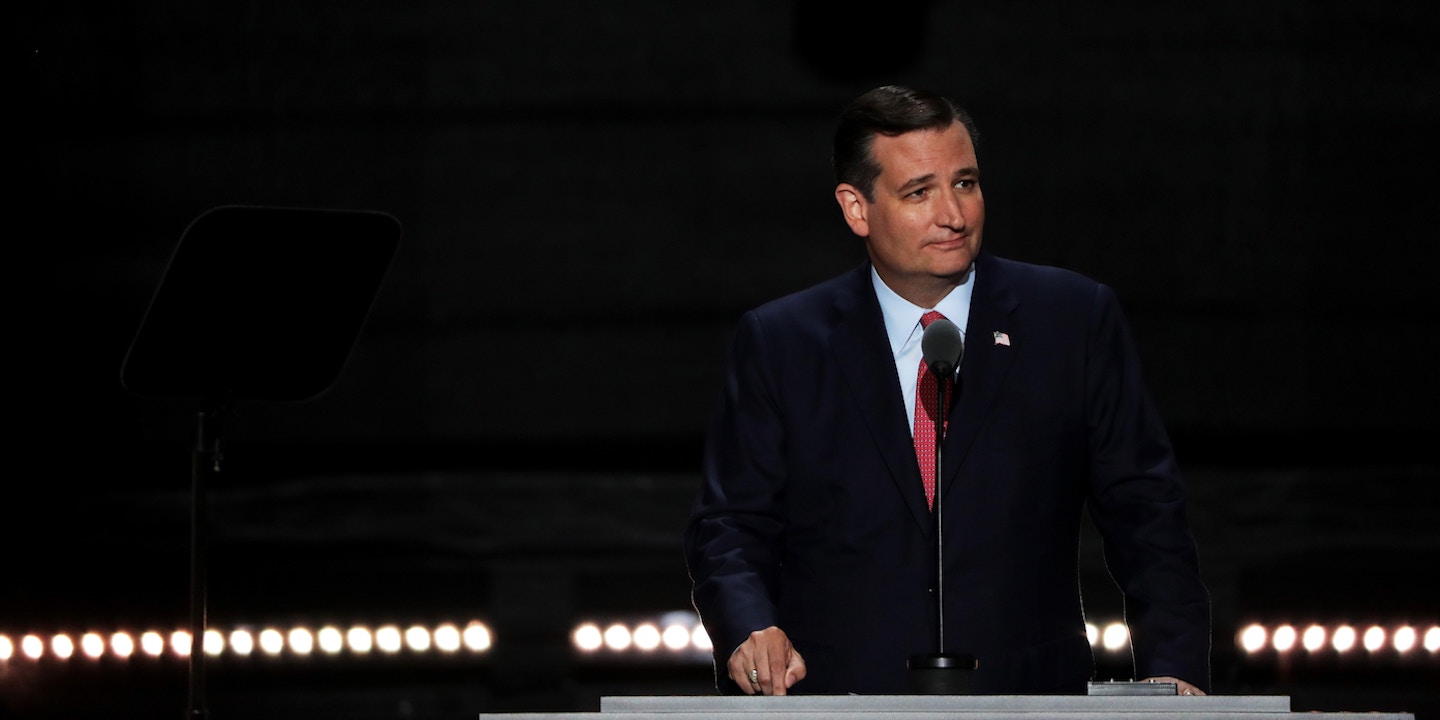 In a remarkable show of disunity at the Republican National Convention in Cleveland, Sen. Ted Cruz was booed and heckled by many delegates on Wednesday night as it became clear that he had no intention of endorsing Donald Trump for the presidency.

Cruz, who had called Trump “a pathological liar” and “utterly amoral” when he dropped out of the race for the Republican nomination in May, refused to follow the lead of two of the other defeated candidates, Gov. Scott Walker and Sen. Marco Rubio, who did endorse the billionaire in their speeches.

Watching Cruz give what seemed like a campaign speech for himself, Trump’s children sat in silence.

Near the end of his speech, however, there were cheers and a ripple of applause from the delegates when Cruz looked into the camera and said, “To those listening, please don’t stay home in November.”

But Cruz was then jeered as he pointedly stopped short of asking Americans to vote for Trump, saying instead: “If you love our country and love your children as much as I know that you do, stand and speak and vote your conscience — vote for candidates up and down the ticket who you trust to defend our freedom and to be faithful to the Constitution.”

As reporters in the hall noted, Trump supporters, led by the New York delegation directly in front of the stage, chanted for Cruz to endorse the nominee, yelled “say it!” and heckled and booed him when he did not.

That is louder than any boo Hillary Clinton got here.

Delegates scream "Trump! Trump!" at @SenTedCruz and "Wrap it up!" Booed for not endorsing @realDonaldTrumpz pic.twitter.com/ZYpJqSfwsO

The uproar intensified as Cruz moved on to his closing remarks, and Trump suddenly appeared in the hall before the senator had finished speaking, drawing the spotlight, and the cameras, away from his rival.

Here are the boos as Cruz refuses to endorse Trump: #RNCinCLE pic.twitter.com/RPo15m39S2

The booing, mixed with some applause from the senator’s supporters in the hall, continued as Cruz finally concluded his remarks and retreated from the stage.

The floor as Cruz ended his speech pic.twitter.com/0o9iMjvUDy

The boos for Cruz, from the floor near the Alabama and Oklahoma delegations #RNCinCLE pic.twitter.com/oEyA9cMJZe

cruz's reception from the crowd takes me back to when I used to debate him in college. pretty much same reactions.

The senator’s wife, Heidi Cruz, was seen being escorted from the convention floor as delegates hurled abuse at her too.

HEIDI CRUZ escorted out by security as crowd gets angry at Cruz for his speech. One Trump supporter shouting "Goldman Sachs!" at her

Immediately after the debacle, Clifford Young, an alternate in the California delegation, told my colleague Mattathias Schwartz that he was one of those who booed Cruz, shouting “Get off the stage!”

“He was supposed to be supporting Donald Trump,” Young said. “It’s sour grapes. He needs to go back to Texas. And stay in Texas.”

As several observers noted, the lack of an endorsement was far from surprising, given that Trump had chosen to make the race for the nomination deeply personal, first by referring to Cruz as “Lyin’ Ted,” then by mocking the senator’s wife as unattractive and finally going so far as to suggest that his Cuban father might have been involved in the assassination of John F. Kennedy.

Republican delegates surprised that Cruz didn't endorse guy that suggested his father was involved in JFK assassination. So they boo him.

On Thursday morning, when a member of the Texas delegation accused the senator of breaking his promise to support the party’s nominee, Cruz said “that pledge was abrogated the day this became personal.”

Ted Cruz on Trump: "I am not in the habit of supporting people who attack my wife and who attack my father." https://t.co/3sRTdei3BV

“I am not in the habit of supporting people who attack my wife and attack my father,” he said. “That pledge was not a blanket commitment that if you go and slander and attack Heidi that I’m going to nonetheless come like a servile puppy dog and say, ‘Thank you very much for maligning my wife and maligning my father.'”