Donald Trump repeatedly called for the U.S. to withdraw from Iraq. Now he blames Obama for doing that. 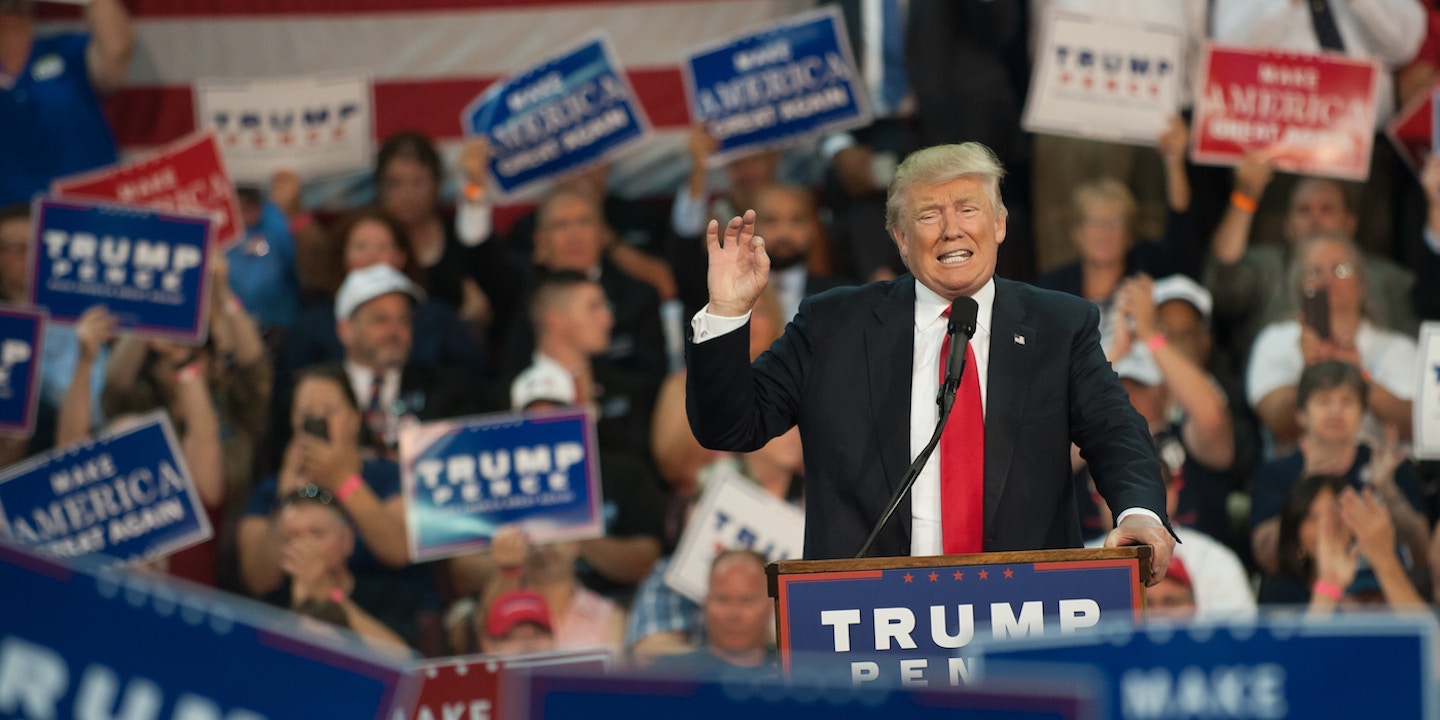 Moments after Donald Trump told supporters at a rally in Erie, Pennsylvania, on Friday that he was “obviously being sarcastic” when he repeatedly called President Barack Obama “the founder of ISIS,” he seemed to backtrack on backtracking, by adding, “but not that sarcastic, to be honest with you.”

Video: Trump says he was being "sarcastic...but not that sarcastic" when calling Obama the "founder of ISIS" https://t.co/f4NxUZchdk

Video of the comments from NBC News showed that Trump then accused the media of intentionally distorting his words, pointing at the assembled press corps and telling the crowd, “These people are the lowest form of life.”

As his supporters cheered, the candidate then executed another half pivot. “They are the lowest form of humanity!” Trump bellowed. “Not all of them, they have about 25 percent that are pretty good actually, but most of them.”

The meandering, jokey way Trump speaks, riffing on subjects like a stand-up comic working out his material live on stage, makes the task of reporting his comments unusually challenging.

Trump's sarcastic delivery is so subtle that nobody notices he's doing it until he tells us. (Or, he's lying.) https://t.co/h4ekbiFGuw

The candidate himself even lamented recently at an appearance in Virginia — where he assured the mother of a crying baby that she was welcome to stay before asking her to leave — that his own supporters sometimes think he is joking when he is serious. “I think she really believed me that I love having a baby crying while I’m speaking,” he told the crowd. “That’s OK, people don’t understand, that’s OK.”*

Trump: "I think she really believed I love having a baby crying while I'm speaking. People don't understand" pic.twitter.com/cxJQfeo54I

Trump seems to have less sympathy for the members of the press forced to parse his improv act for a living,

After insisting for days that he had not been speaking metaphorically about Obama and ISIS, Trump finally explained to an NBC affiliate in Florida on Thursday that he blamed Obama and Clinton for creating the conditions for ISIS to flourish by withdrawing American troops from Iraq in 2011. “Instead of keeping some troop presence there, he announced a date that he’s leaving and then, very importantly, he took everybody out, all of a sudden,” Trump told WTVJ. “They just sat back and waited, and when we left, basically, ISIS was formed.”

As the Clinton campaign argued a year ago, when Jeb Bush used this same argument to blame the current administration for the chaos in Iraq, the Status of Forces Agreement under which the U.S. promised to withdraw all of its troops by the end of 2011 was in fact signed by President Obama’s predecessor, George W. Bush, on December 14, 2008 (during a visit to Baghdad better remembered for the nimble way Bush ducked when an Iraqi journalist hurled his shoes at him).

Bush’s attempt to blame Obama and Clinton for the rise of the militant group backfired, most notably when a 19-year-old college student told him, “Your brother created ISIS,” but that didn’t stop Trump from appropriating the line of attack for himself.

As Andrew Kaczynski reported for Buzzfeed News on Thursday, however, Trump is pursuing the argument that Obama and Clinton are to blame for withdrawing U.S. troops from Iraq despite the fact that he himself repeatedly called for an immediate withdrawal when Bush was president.

On the eve of the 2008 presidential election, Trump told British GQ he supported John McCain, but “I wish he would promise to get us out of Iraq faster.”

Speaking to Wolf Blitzer of CNN on March 16, 2007, Trump first said that he regretted the ouster of Saddam Hussein, praising the Iraqi dictator just as he would nine years later on the campaign trail. “Saddam Hussein, whether they like him or didn’t like him, he hated terrorists, he’d shoot and kill terrorists,” Trump said. “Now it’s a breeding ground for terrorists.”

Check out this @cnn exchange I had w/ @realDonaldTrump in 2007 on the Iraq War https://t.co/hTnPPR30qN

He then called the war “a total disaster” and argued for an immediate end.

“How does the United States get out of this situation?” Blitzer asked.

Trump then suggested that the U.S. should withdraw as quickly as possible even though the deteriorating security situation could bring someone worse than Saddam to power. “We’re keeping the lid on a little bit but the day we leave anyway it’s all going to blow up,” Trump said. “Compared to the person that takes over for Saddam Hussein, he will be considered a nice person. This guy will be the meanest, the worst guy and he’ll have one thing, one thing: he will hate America, and he’ll use that to flame.”

“So, I mean, this is a total catastrophe and you might as well get out now, because you just are wasting time,” Trump concluded.

Trump held the same positions the year before, telling Larry King on October 9, 2006, that removing Saddam Hussein, who “hated terrorists,” had been “a disaster from day one.”

“Now, Iraq is a breeding ground for terrorists,” he said, “and the day we leave — it’s already falling apart, it has nothing to do with us even staying there — but the day we leave, that country is going to be taken over by somebody who’s meaner and more vicious than Hussein.”

“How does it end?” King asked.

“Well, it ends by somebody being intelligent and saying, ‘It’s time to leave.’” Trump replied.

“We should be out of Iraq. We should do it quickly and effectively,” he added. “You know I used to say in Vietnam, ‘Declare yourself a winner and leave,’ right? Maybe that’s what we have to do in Iraq.”