Abu Zubaydah made his first appearance on video from Gitmo before a Periodic Review Board, 14 years after the last day of a month-long interrogation at a CIA black site. 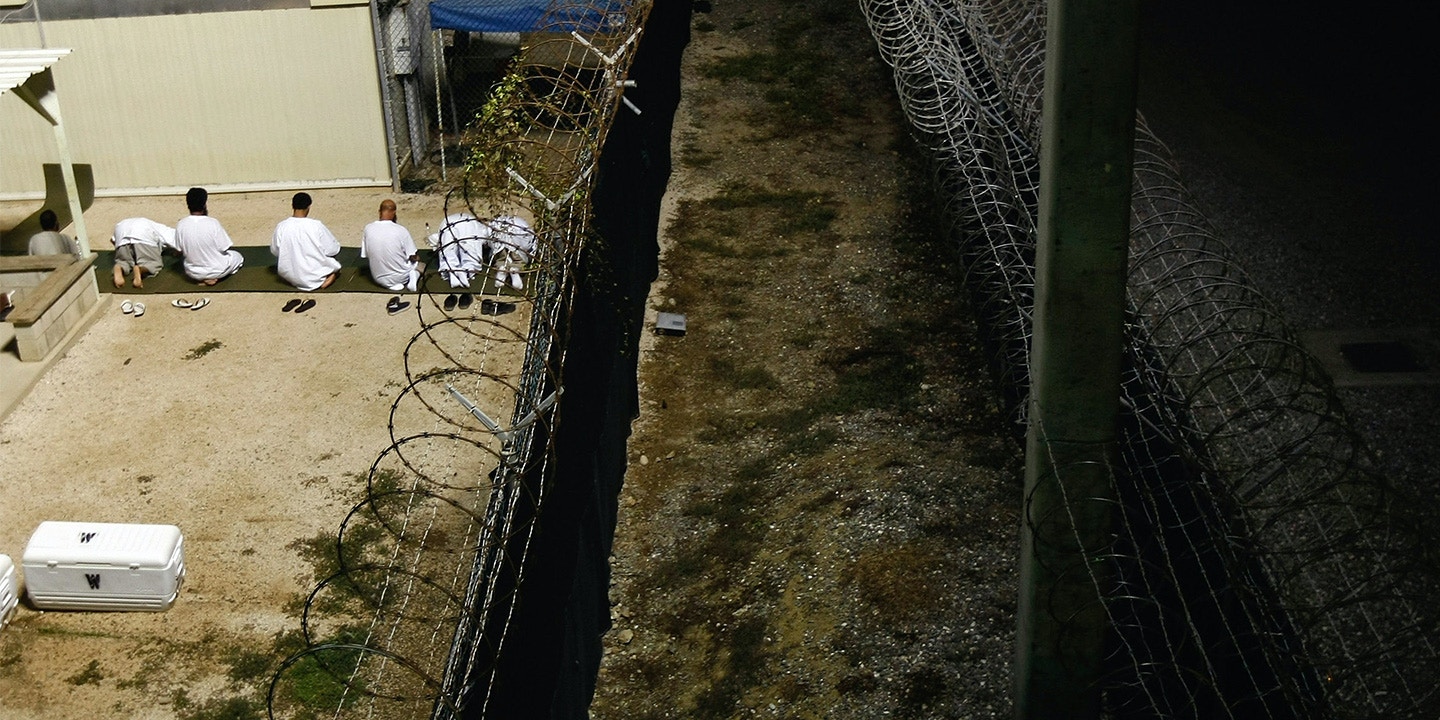 Abu Zubaydah, 45, made his first appearance Tuesday on video from Guantanamo in a hearing before a Periodic Review Board, 14 years after the last day of a month-long interrogation at a CIA black site in Thailand. It was the first time the “enhanced interrogation techniques” approved by the Bush administration were used on a detainee.

Back then, Abu Zubaydah still had his left eye.

Representatives from the media, nongovernmental organizations, and academia were permitted to view the unclassified opening portion of the hearing from a conference room at the Pentagon, but the segment does not include any statement or comments from the detainee. It was the first glimpse outside observers got of Zubaydah since a photo of his face with an eye patch was published by Wikileaks in 2011; at one point he was touted as al Qaeda No. 3.

What observers saw Tuesday was a well-groomed, youthful 45-year-old dressed in white and wearing a black eye patch around his neck; he switched between two pairs of eyeglasses to follow documents being read out loud by a translator. He was accompanied by two military “personal representatives” who spoke on his behalf, but he did not have a private attorney. Abu Zubaydah, a Palestinian whose real name is Zayn al Abidin Muhammad, was captured in a raid of a Faisalabad, Pakistan, house on March 28, 2002, suffering severe bullet wounds. The interrogation techniques used on him included stress positions, sleep deprivation, insects placed in a confinement box, and waterboarding, among others.

Most notably perhaps, he was waterboarded 83 times.

“He spent a total of 266 hours (11 days, 2 hours) in the large (coffin size) confinement box and 29 hours in a small confinement box, which had a width of 21 inches, a depth of 2.5 feet, and a height of 2.5 feet,” according to the Senate torture report. “The CIA interrogators told Abu Zubaydah that the only way he would leave the facility was in the coffin-shaped confinement box.”

The Tuesday review board hearing was first opportunity to make a case for his release. “Although he initially believed that he did not have any chance or hope to be released, because of the reputation that has been created through the use of his name, he has been willing to participate in the Periodic Review Process,” his military representative stated, “and he has come to believe that he might have a chance to leave Guantanamo through this process.”

The government opposes Abu Zubaydah’s release, and an unnamed official reading his detainee profile at the review alleged his participation in or knowledge of the embassy bombings in Kenya and Tanzania in 1998, the USS Cole bombing in 2000, and involvement in Khalid Sheikh Mohammad’s plans to attack US and coalition forces after 9/11, among other plots.

Yet the official also stated he “has shown a high level of cooperation with the staff at Guantanamo Bay and has served as a cell block leader, assuming responsibility for communicating detainees’ messages and grievances to the staff and maintaining order among the detainees.”

That same cooperation is now being used to justify his continued detention. Abu Zubaydah, who has completed university coursework in computer programming, could be a threat because has used his time in Guantanamo to “hone his organizational skills, assess U.S. custodial and debriefing practices,” the official said, and that experience “would help him should he choose to reengage in terrorist activity.”

Abu Zubaydah’s chances of being approved for release are not good, and the future of the Guantanamo detainees who are designated for indefinite detention without trials is unclear.

Of the 61 detainees now held at Guantanamo, 20 are currently approved for repatriation or transfer to a third country. Seven men are in pre-trial proceedings and three have been sentenced. The review board has decided 18 require continued detention to protect against a continuing significant threat to the U.S. security. An additional 13 are awaiting review board decisions or an upcoming hearing.