Why aren’t congressional Democrats conducting their own investigation into U.S. citizens for possible Kremlin ties?

Leading House Democrats on Tuesday sent a letter to FBI Director James Comey, which they promptly published, asking the agency to investigate whether the Trump campaign and the Russian government have entered into a joint plot “to interfere with the U.S. presidential election.” Although the House Democrats say they do not know whether such a conspiracy with Moscow exists, they say that “serious questions have been raised” — specifically about whether Trump supporters worked in tandem with Kremlin agents to hack Democratic Party computer systems, and “about overt and covert actions by Trump campaign officials on behalf of Russian interests.”

As grounds for their suspicions, these top Democrats cite certain associations between Trump advisers and various Russians, suspicious visits by them to Moscow, and statements Trump supporters made that are critical of the United States of America or advocate better relations with Moscow. These statements and policy views, these top Democrats suggest, demonstrate possible disloyalty to the United States, which should be investigated. 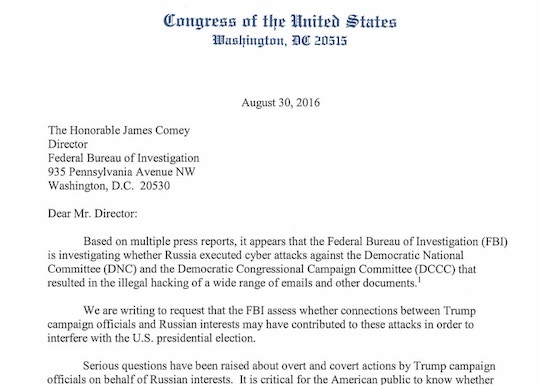 For instance, “one of Donald Trump’s foreign policy advisers, Carter Page, traveled to Moscow to give a speech that was harshly critical of the United States and its ‘hypocritical focus on ideas such as democratization, inequality, corruption, and regime change.’” The top Democrats also note that another Trump adviser, retired Lt. Gen. Michael Flynn, “traveled to Moscow in December 2015 and joined Vladimir Putin at the head table during a dinner honoring the Kremlin-backed media network RT,” and then “gave a speech that was highly critical of the United States” (the House Democrats do not mention that Gen. Flynn was appointed by President Obama in 2012 to head the Defense Intelligence Agency, and they are cryptic about whether they believe the general is a full-scale Russian operative or merely an unwitting Useful Idiot).

This letter was clearly part of a coordinated plan by Democrats to call for an FBI investigation into their domestic political adversaries for possible Russia links. Senate Minority Leader Harry Reid sent a similar letter to Comey yesterday asking him to investigate “evidence of a direct connection between the Russian government and Donald Trump’s presidential campaign.” Reid explicitly harkened back to the era of American politics when this type of rhetoric was common, saying that “the prospect of a hostile government [Russia] seeking to undermine our free and fair elections represents one of the gravest threats to our democracy since the Cold War.”

The calls by congressional Democrats for an FBI investigation into possible Moscow-engineered subversiveness on American soil come as various Clinton supporters are calling for increased confrontation with Russia. President Obama’s former Ambassador to Russia Michael McFaul yesterday said “the Obama administration will need to respond” if Russians were involved in hacking state election centers, while the managing editor of a popular liberal blog announced that once the election is over, “let’s kick some ass on that front” — meaning Russia. Meanwhile, Democratic pundits are increasingly signaling to Americans that they should distrust the legitimacy and reliability of their democratic elections if Hillary loses because it will likely mean that Putin manipulated the votes by hacking to help Trump.

While possible Kremlin allegiances on American soil are certainly a major source of concern — that goes without saying for all Patriotic Americans — it’s unclear why congressional Democrats are seemingly abdicating their solemn duties by failing to conduct their own investigation. It’s true that the FBI has an extensive and well-known history of conducting aggressive investigations into suspicions that American citizens are covertly working in tandem with Moscow (indeed, the longtime director after whom the FBI’s headquarters is named pioneered many new investigative techniques in the course of doing so, and when publishing their letter, these leading House Democrats notably featured a picture showing his honored name on the front of the FBI building). But the U.S. Congress also has its own tradition of investigating un-American activities on the part of U.S. citizens. It’s mystifying, and more than a little disturbing (perhaps itself a bit suspicious), why these leading congressional Democrats would not avail themselves of this investigative template in order to uncover the latest domestic plots led by the Russians as a means of subverting American democracy.