Serious questions about motive emerge from the president’s record on Russia.

When a major party cynically espouses a set of beliefs as a tactic for winning an election, those beliefs get entrenched in popular discourse and often endure well past the election, with very significant consequences. The most significant such rhetorical template in the 2016 election — other than the new Democratic claim that big-money donations do not corrupt the political process — is that Russia is a Grave Enemy of the U.S.; anyone who advocates better relations or less tension with Moscow is a likely sympathizer, stooge, or even agent of Putin; and any associations with the Kremlin render one’s loyalties suspect.

Literally every week ushers in a new round of witch hunts in search of domestic Kremlin agents and new evidence of excessive Putin sympathies. The latest outburst was last night’s discovery that Donald Trump allowed himself to be interviewed by well-known Kremlin propagandist and America-hater Larry King on his RT show. “Criticizing US on Russian TV is something no American, much less an aspiring prez, should do,” pronounced Fred Kaplan. Other guests appearing on that network include Soviet spy Bernard Sanders (who spoke this year to Putin crony and RT host Ed Schultz), Bill Maher (whose infiltrates American culture through his cover as a comedian hosting an HBO program), and Stephen Hawking (whom the FSB has groomed to masquerade as a “physicist” while he carries out un-American activities on behalf of Putin). 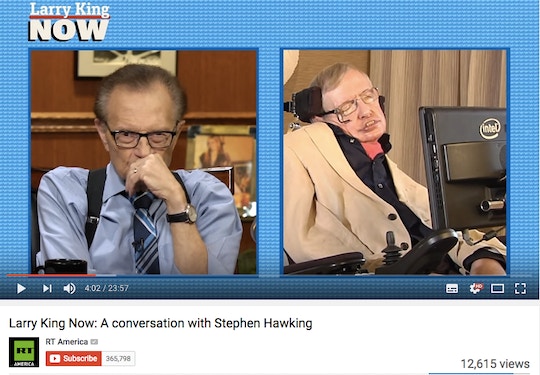 Despite the fact that Russia ceased long ago to be guided by anything resembling communism, this linking of one’s political adversaries to the Kremlin is such a potent tactic in the U.S. because of decades of Cold War rhetoric about Moscow. Referring to Putin, Matt Lauer this week asked Trump: “Do you want to be complimented by that former KGB officer?” Denouncing Trump’s praise of Putin, Democratic Rep. Charlie Rangel called the Russian president “a communist leader that’s a potential enemy!” Explaining why Trump’s comments about Russia are so remarkable, the New York Times contended that “Mr. Trump has made improved relations with the Kremlin a centerpiece of his candidacy” in “a fashion that would have been unheard-of for a Republican during or immediately after the Cold War.”

There are all sorts of glaring ironies, and glaring dangers, to this new theme — including the fact that “improved relations with the Kremlin” was a long-time plank of the Democratic Party, which, as a result, was routinely vilified by the American Right as Kremlin agents and sympathizers (as were Republicans such as Nixon and Reagan when they sought better ties with Moscow). But the most glaring irony of all is that as Clinton-led Democrats this year equate overtures toward Russia as evidence of Putin-loving disloyalty — whether it be Trump’s opposition to arming Ukraine or his heretical questioning of NATO — there is an American politician who has, time and again, accommodated Putin, sought to improve relations with Moscow, dismissed as fearmongering the threat Russia poses to the U.S., and repeatedly taken steps that benefited Russian interests.

That politician’s name is Barack Obama. As Trevor Timm wrote yesterday in The Guardian, “Barack Obama seems to be the only politician not playing into the cold war 2.0 hysteria.” Indeed, Obama has continually acted in accord with Russia’s agenda and sought to pour cold water on attempts to revive Cold War rhetoric and policies.

Early last year, U.S. intelligence agencies claimed to have evidence that Russia was making increasingly aggressive military incursions into Ukraine, including with tanks and artillery. Leading foreign policy experts in both parties — including Madeleine Albright, Zbigniew Brzezinski, and Obama’s own Joint Chiefs Chairman Gen. Martin E. Dempsey — united to pressure President Obama to send arms to Kiev to ward off what they viewed as Russian aggression. But Obama steadfastly refused. Obama’s recalcitrance became so entrenched that a bipartisan alliance in Congress emerged to introduce legislation to force him to provide lethal aid. As the New York Times reported:

Representative Eliot L. Engel of New York, the top Democrat on the House Foreign Affairs Committee, said last week that he was so “disappointed” in the administration for not using tools in past legislation authorizing more sanctions against Russia and arms for Ukraine that he was introducing a new bill to “dial up the pressure on Vladimir Putin.”

The Ukraine debate of 2015 was not the only instance in which President Obama has taken action that accommodated Putin and benefited Russian interests. Last year, Russia began bombing Syria in order to protect its long-time client Bashar Assad. While Hillary Clinton and others advocated imposition of a “no-fly zone” to stop the Russians, Obama did nothing. To the contrary, Obama — who himself has spent two years bombing the anti-Assad fighters in Syria whom the U.S. government regards as terrorists (killing many civilians in the process) — is now actively forging a partnership with Putin whereby Russia and the U.S. would jointly bomb agreed-upon targets in Syria (ones opposed to Assad). 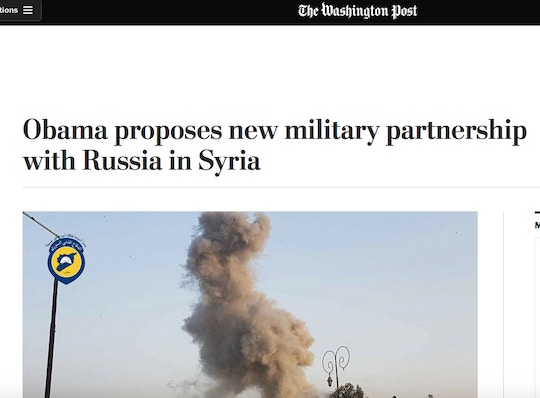 Then there’s Obama’s total passivity in the face of accusations from Democrats and others that Putin has been actively and maliciously interfering in U.S. elections this year through hacking, disinformation, and other subversive measures. For those who really believe these claims, shouldn’t the U.S. president be issuing strong condemnations and taking aggressive retaliatory measures? What has Obama done to punish Putin for these transgressions? By all appearances, he’s done nothing. Max Boot — who until recently was one of the country’s most discredited neocon extremists but has now once again become a Respectable and Credible Commentator by virtue of endorsing Clinton over Trump — complained this week about Obama’s submission to Putin:

Even when hacks can be traced to Russia, it’s very difficult to prove that the Kremlin was responsible. But the U.S. government doesn’t need to wait for definitive proof to act, assuming, as appears likely, the evidence is already overwhelming. … And yet no action has been forthcoming so far. …

Reflecting the professorial style of the president, this is an administration that has a tendency to talk problems to death even as they grow worse. … So far the Obama administration, in this area as in so many others, is choosing the take-it-on-the-chin option. …

In fact one suspects that that the information-gathering now being conducted by the intelligence community can provide a convenient cover for administration inaction — how can the president possibly do anything before all the facts are in?

So after acting in Putin’s interests in both Ukraine and Syria, Obama now backs down from challenging or punishing him even when the Russian leader interferes in U.S. elections? The plot does indeed thicken.

But perhaps most bizarre of all was the relentless messaging of the Democratic Party under President Obama during the 2012 campaign. All year long, GOP nominee Mitt Romney tried to alert the country of the menace posed by Putin and the Kremlin. Russia “is without question our No. 1 geopolitical foe. They fight for every cause for the world’s worst actors,” Romney warned.

For his patriotic efforts to warn Americans, what did Romney get in response from Obama-led Democrats? Nothing but derision and scorn. During their foreign policy debate, Obama mocked Romney for his Russia-phobia, telling him: “The 1980s are now calling to ask for their foreign policy back because … the Cold War’s been over for 20 years.” Joe Biden “attacked the former Massachusetts governor for being ‘one of a small group of Cold War holdovers,’ for naming Russia as a major threat to the United States.” At the DNC convention, John Kerry scoffed at this Russia-as-Villain cartoon: “Mitt Romney talks like he’s only seen Russia by watching Rocky IV.” The Democrats even made a campaign poster laughing at Romney’s concerns over Putin: Leading Democrats made it a central theme of 2012 that only someone stuck in antiquated, obsolete Cold War thinking could possibly regard Russia as some sort of dangerous or serious threat:

The Obama-led Democratic Party of 2012 — with very suspect motives and possibly suspect loyalties — tweeted all forms of mockery aimed at Mitt Romney as a result of the GOP nominee’s valiant attempt to warn about the menace of Vladimir Putin:

Romney, who calls Russia our "No. 1 geopolitical foe," doesn't seem to realize it's the 21st century. #RomneyNotReady http://t.co/xcvhOAFS

While it’s true that Russia had not yet annexed Crimea, it was accused of doing all sorts of other things by that point that Democrats today hold up as proof of the Kremlin’s evil — including its incursion into Georgia (2008), its active support of Assad (2012), its imprisonment of Pussy Riot (2012), its alleged poisoning of Putin critic Alexander Litvinenko (2006), its alleged murder of journalist Anna Politkovskaya (2006), and the shooting of human rights lawyer Stanislav Markelov and journalist Anastasia Baburova (2009). In the face of all that, there were Obama-led Democrats throughout 2012 mercilessly mocking — as outdated Cold War rhetoric; Hillary Clinton called it “dated” — the notion that Russia was a serious threat or that Putin ought to be regarded as serious geopolitical foe.

It is certainly disturbing to watch Donald Trump express admiration for Putin’s domestic authoritarianism and venerate that as “strength.” That’s a valid concern, as it reflects — by his own reckoning — what Trump is likely to do, or what he wants to do, if he becomes president.

But this ongoing attempt to equate a desire for better relations with Russia with disloyalty to America, or to vilify any associations with Moscow as proof of un-American Putin sympathy, is toxic in the extreme. Beyond being dangerous and oppressive, it’s incredibly short-sighted. After all, the politician who, in reality, has most accommodated Vladimir Putin and most eagerly sought to avoid tensions with the Kremlin — up to and including trying to partner with them to bomb Syria — happens to be the one currently occupying the Oval Office: a Democrat.