Who’s Left at Guantánamo? Fates of Dozens of Prisoners Are Undecided

The administration has completed its parole-style reviews of the detainees in the prison, but many of them are still in limbo. 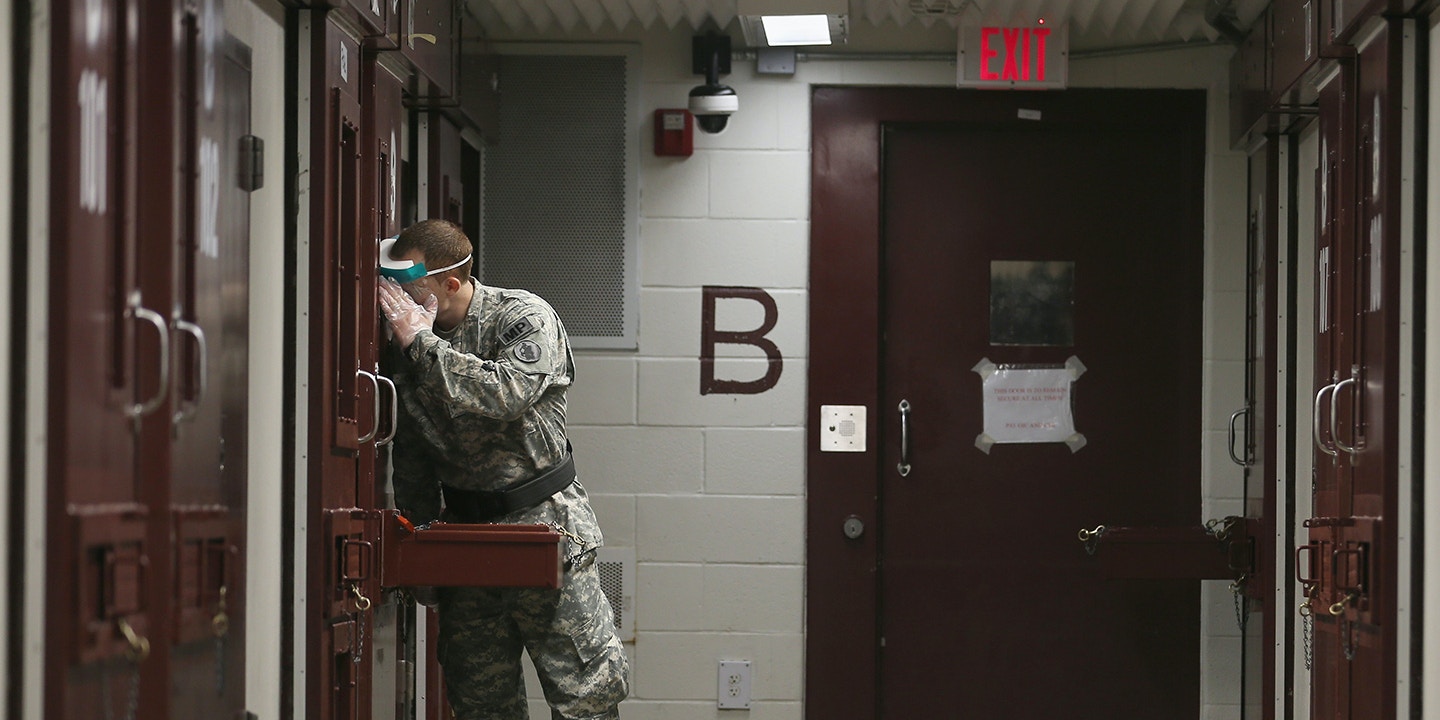 The last Guantánamo detainee to make the case for his release before a panel of senior administration officials is also the youngest man left at the island prison.

In a hearing Thursday of Guantánamo’s Periodic Review Board, Hassan Ali Bin Attash, a Yemeni who is believed to be about 31 years old, said through representatives that he was working toward a high school GED diploma and hoped to join relatives in Saudi Arabia and find a job as a translator.

Attash’s exact birthdate is uncertain, but he was certainly a young teen in 1997, when the U.S. military alleges that he pledged allegiance to Osama bin Laden and began working for senior al Qaeda figures doing everything from bomb-making to logistics. He was captured in Pakistan in 2002 and spent the next two years being moved between CIA black-site prisons and interrogations in Afghanistan and Jordan before landing in Guantánamo in September 2004. While in U.S. custody, according to his own and other prisoners’ accounts, he was subjected to sleep deprivation, hung from a bar by his wrists, and threatened with dogs and electric shocks, among other forms of torture. He was also severely tortured by the Jordanians.

The military assessment filed for the board states that in Saudi Arabia, Attash could easily reconnect with terrorist actors, and that his family is also suspect. Attash’s older brother Walid bin Attash is one of the five men being tried before the Guantánamo military commission for the 9/11 attacks.

His lawyer, David Remes, countered that allegation, saying that he has never heard the younger Attash express anti-American or extremist views.

“Now a young man, with a mind of his own, he is no longer under the sway of others and can make independent decisions,” Remes told the board.

As with all hearings before the Periodic Review Board — a sort of parole process for Guantánamo detainees — the proceedings were piped by video from Cuba to media and other observers in a room at the Pentagon. Attash, who has previously been seen in photos in an orange jumpsuit with wild hair, appeared as a neatly groomed young man. Detainees are not allowed to speak during the open portion of the hearing.

Attash’s hearing marks the end of a three-year process in which the Obama administration has reconsidered the cases of many of the last men left at Guantánamo, with the aim of closing the prison before the president leaves office. As of today, all of the detainees who were eligible for a Periodic Review Board hearing have had one.

The final hearing provides an opportunity to look at the 61 men left in Guantánamo and what the administration proposes to do with them.

Twenty men are now approved for transfer to another country. Seven are currently facing charges at the military commissions, Guantánamo’s war court (this includes the five accused of plotting the 9/11 attacks). One remaining detainee has already been convicted by the war court, and two others pleaded guilty. Another 12, including Hassan Attash, have had their hearing but are still awaiting the board’s decision.

Nineteen fall into the intractable category of prisoners who have not been referred for prosecution, but whom officials believe they cannot safely release. The board recommended these men for “continued detention under the law of war” — in other words, slating them for indefinite detention.

“In the next few months, it will be interesting to see whether the administration uses all of its powers to release the many men left who are not yet cleared but who it has no intention of charging,” said Shayana Kadidal, senior managing attorney at the Center for Constitutional Rights, which represents many detainees. “That will show whether the president is genuinely committed to closing the prison or just intends to leave his own unfinished promises for the next president to resolve.”

The administration’s effort to classify detainees has evolved over the years. After Obama’s year-one promise to close Guantánamo, he convened a task force to evaluate the cases of all the detainees there, recommending them for prosecution, continued detention, or transfer to another country.

Obama also established the Periodic Review Boards (known in Gitmo lingo as PRBs) to regularly evaluate the situation of each detainee the task force had recommended for detention or trial, in order to determine whether they still pose a threat to the United States or if they could be safely released. The board includes representatives from the departments of Defense, State, Homeland Security, and Justice, as well as the Joint Chiefs of Staff and the Director of National Intelligence. They don’t take up the legality of holding the prisoner. Instead, they consider the intelligence against the detainee, and whether it still holds up, as well as the detainee’s behavior and activities. They also consider what life after Guantánamo would look like — family and other support networks, job prospects, and the stability of their home country.

As such, the review boards offer a rare glimpse into life at the prison, with detainees often submitting personal details, reports from vocational or language classes, or even paintings. Remes, Attash’s lawyer, said that “when the prison still made such publications as the Washington Post and New York Times available to detainees, Hassan devoured them.” (A Guantánamo public affairs officer would not comment on whether those newspapers were allowed but said that the “intellectual stimulation program” for detainees “includes books, magazines and puzzles, newspapers, handheld electronic games, movies and satellite television.”)

The administration has been criticized for the slow start to the PRB process; the first hearing didn’t happen until 2013. This year, as the prison’s population dipped below 100 for the first time, the pace of the PRBs sped up.

When someone is cleared for transfer, the administration has to find a place to resettle him, which is particularly tricky when his home country isn’t an option (many of the remaining men are from Yemen, which is currently embroiled in a devastating war).

The prisoners slated for indefinite detention present a bigger conundrum. Each prisoner may have his PRB file reviewed every six months, and after three years (if the regime at Guantánamo continues) he’d be eligible for another hearing. One detainee is already scheduled for his second PRB hearing in October.

The Pentagon says that whatever the decision of the PRB, the administration can continue to evaluate “individualized disposition” options, including transfer, prosecution in the military commissions or by another country, or, should Congress lift the current ban on bringing Guantánamo inmates to the United States, imprisoning them or trying them domestically (recent court decisions have limited the types of charges the military tribunals can bring).

In other cases, the detainees are unlikely to be tried because the evidence against them is tainted by torture (already an issue in other military commissions proceedings) or because there simply isn’t much evidence against them at all, said Kadidal, of the Center for Constitutional Rights. “Most of these men are in fact not people who are worthy of prosecution,” he said.

If the U.S. government continues to assert that it can hold them under the law of war, Kadidal said, “we can expect continued challenges” in federal court questioning whether the conflicts justifying the detentions are really still taking place.

“If not, continued detention is illegal,” he said.

Top Photo: A U.S. Army Military Police checks in on a detainee during morning prayer at Camp V in the U.S. military prison at Guantánamo Bay in Cuba on June 26, 2013.