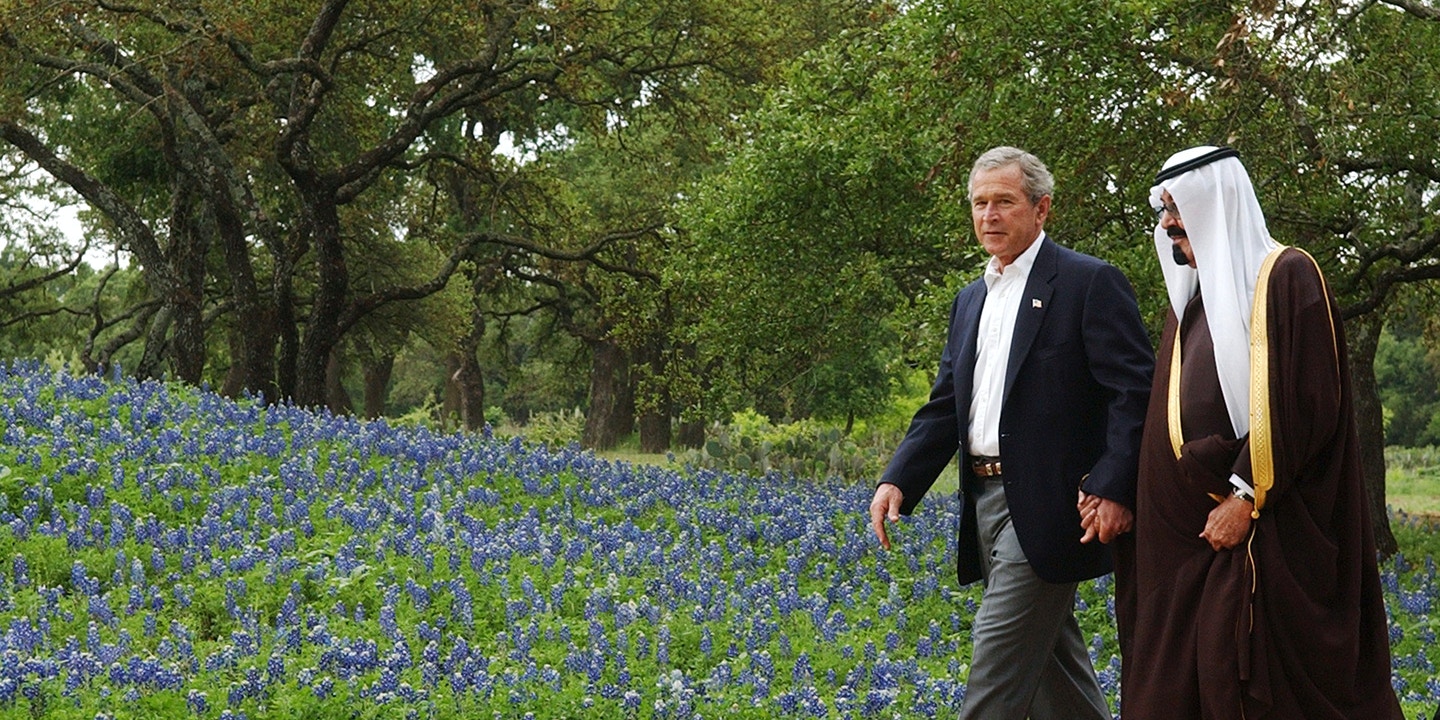 When I tried to correct him, he Tweeted a dare:

@mtracey Pls count up the stories about the 'crisis' of Bush 43 serving while 41's Foundation remained operational, and then let's compare

Clinton operatives and their media supporters have cast criticism of Clinton Foundation practices as indicative of a double standard and complained that allegations of unethical conduct unfairly tarnish an otherwise sterling charitable enterprise. The level of transparency the foundation has imposed on itself is “unprecedented,” Clinton loyalists frequently insist.

It’s true that the volume of criticism over the Clintons’ close relationship with Saudi financiers has been substantial, including a recent front-page story in the New York Times. But this is not evidence of any anti-Clinton conspiracy — it’s common sense. And the Bushes faced similar allegations.

So I decided to take Fallon up on his challenge. There are plenty of examples.

In a May 2002 column lambasting George W.’s foreign policy acumen, New York Times columnist Maureen Dowd mocked the elder Bush’s acceptance of Saudi largesse: “The Bush presidential library was built in part with millions of dollars from Saudi Arabia and Kuwait,” she wrote.

In September 2003, the American Prospect, a leading liberal policy journal, cited “the Saudi bankrolling of Poppy’s presidential library” as evidence of a sinister linkage between “the House of Bush and the House of Saud,” and intimated that the opaque connections between the two families undermined U.S. credibility on the world stage. The author, Michael Steinberger, recommended that Democrats exploit this vulnerability in the forthcoming 2004 presidential election. (John Kerry later heeded Steinberger’s call.)

The liberal Center for American Progress think tank issued a report in 2004 entitled “The Complete Saudi Primer,” which detailed all the multitudes of ways in which the Bushes’ Saudi dealings — including then-Saudi Ambassador to the U.S. Prince Bandar bin Sultan’s $1 million donation to the Bush Library — were indicative of nefarious collusion. The founder and president of the organization at the time of the report’s publication was John Podesta, the current chairman of the Hillary Clinton presidential campaign.

In March 2002, the late journalist Robert Novak disclosed in the Chicago Sun-Times that Bill Clinton had journeyed to Saudi Arabia to deliver a speech for which he was compensated $750,000. Novak noted that the Saudis had also extended financial support to the Bush Family, by way of a donation to the senior George’s library fund.

A May 2003 cover story in The Atlantic by Robert Baer described the many ways in which Saudi Arabia had allegedly exerted undue influence on the Bush administration and noted: “For good measure [Bandar] also contributed a million dollars to the construction of the Bush Presidential Library, in College Station, Texas.”

Then there was the October 2003 feature in Vanity Fair, “Saving the Saudis,” by Craig Unger, which argued that the extensive personal and financial ties between the Bush clan and various Saudi tycoons likely influenced George W. to take preferential government action on behalf of his foreign benefactors — the most notorious example being when members of the royal family were permitted to board a private plane and flee the United States two days after 9/11, even as all other air traffic had been grounded. The Saudis had “contributed to every presidential library built in the past 30 years,” Unger wrote.

Reporting from Unger’s article (and book) served as source material for a major part of Michael Moore’s 2004 film Fahrenheit 9/11, the highest-grossing documentary of all time.

So, Brian, are these examples satisfactory? Do you agree now that this is a legitimate concern – not simply an unmerited attack by mean-spirited journalists? And are you ready to address whether or not the Clintons are unduly beholden to the Saudis?

That’s not a rhetorical question. For instance, irrespective of any explicit quid pro quo, the Saudis have won tacit acquiescence from Clinton for their military campaign in Yemen, which has caused what is arguably the worst current humanitarian crisis in the world. Using U.S.-provided weaponry, Saudi forces have bombed schools, factories, and hospitals, killing scores of civilians including many children. Vast swaths of the population are now deprived of basic living amenities. Critical infrastructure has been destroyed, preventing the transport of needed goods.

But even though the conflict has been raging since March 2015, Clinton has offered no critical words in public. At a campaign event on June 1, I asked directly for her view on the Saudi incursion — twice. She ignored the question. To this day, her website contains no discussion of the ongoing bombardment. The topic did not come up during last week’s “Commander-in-Chief Forum” on NBC.

By contrast, Donald Trump in August appeared to criticize U.S. involvement with the Saudis in Yemen, although his comments were garbled and only semi-coherent.