Some Republicans are running away from Donald Trump, but an ultra-nationalist candidate in Russia hopes to capitalize on her support for him. 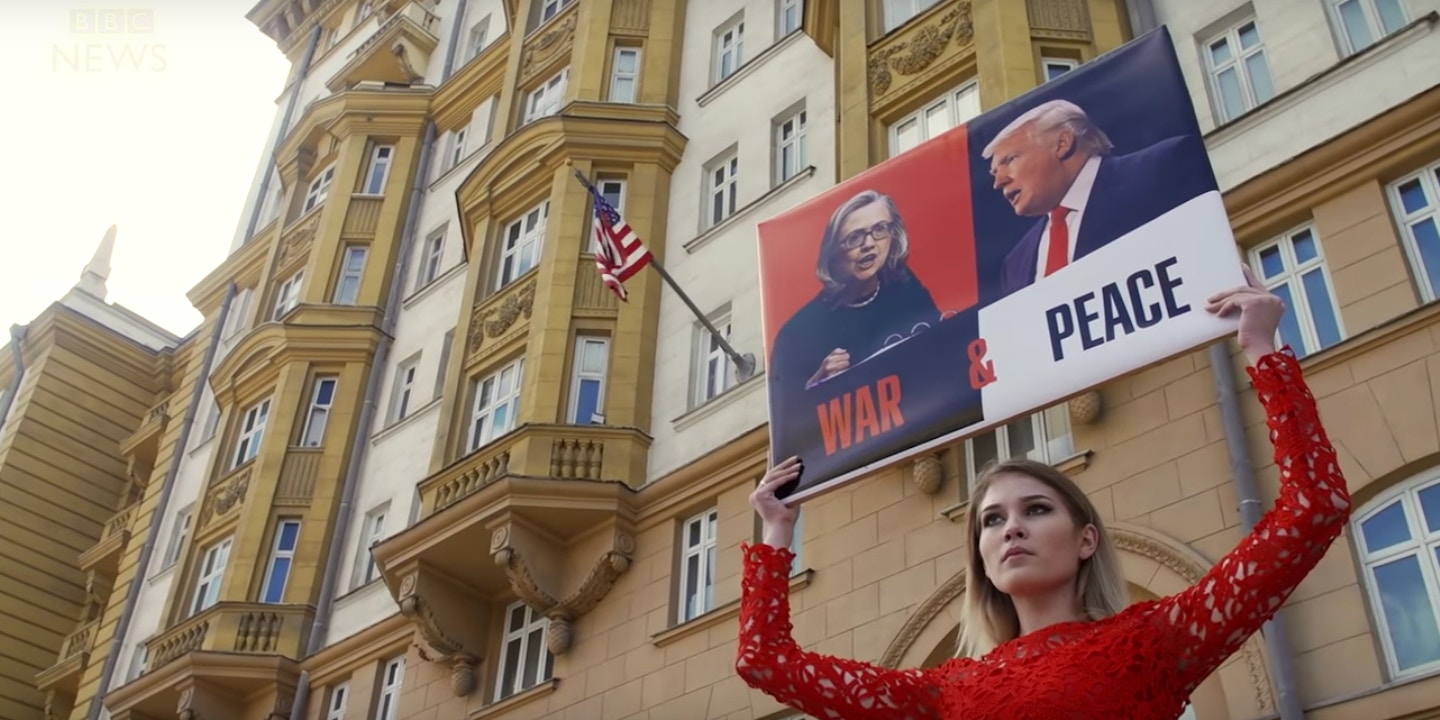 Ahead of this weekend’s elections in Russia to choose deputies for the Duma, the lower house of parliament, one young candidate for an ultra-nationalist party is going all out to associate herself with three politicians revered by the Russian version of the alt-right: Vladimir Putin, Marine Le Pen, and Donald Trump.

Maria Katasonova, 21, who is running to represent the nationalist party Rodina, or Motherland, made her name as a leader of the National Liberation Movement, a far-right group that supports Russian-backed separatists in Ukraine and attacks anti-Putin dissidents for lacking in patriotism.

This week, she shared an image of herself on social networks, wearing camouflage and saluting alongside painted images of Putin, Le Pen, and Trump in their younger days. The poster was captioned “Nobody but us!,” which is the motto of the Russian Airborne Troop.

It was not the first time Katasonova suggested that she would make common cause with the three figures. Last month on Facebook, she shared a painting of herself with them, hinting that she sees herself as a member of a global movement of white, and blond, nationalists.

To that end, Katasonova has repeatedly stressed her credentials as a Trump supporter, and an equally fierce Clinton hater.

The view on our election from Moscow: this young lady is running for the Russian parliament. https://t.co/gCty19ca5g pic.twitter.com/xEVsRfAgni

At one campaign appearance last month, the candidate staged a one-woman protest outside the American Embassy in Moscow, holding up a sign with images of Clinton and Trump above the words War and Peace.

The stunt was accompanied by the release of white doves in Trump’s honor and a statement posted on Instagram that explained Katasonova’s “7 hopes for @realdonaldtrump.”

1. The hope for global peace.
Stop the arms race and lower geopolitical tension. Jointly with Russia and other countries put all effort into stopping the current military conflicts and preventing new ones. Create a new world security system in the conditions of a multipolar world.

2. The hope for genuine war on terror.
Combine the efforts with other countries in the war on terror. Discontinue the practice of supporting any radical groups for achieving political goals. Terrorists must not be distinguished as good or bad ones. All terrorists must be eliminated, no exceptions.

4. The hope for discontinuation of organizing coups and removing unwanted regimes.
Discontinue the practice of organizing and supporting coups in other countries. Interfering in the affairs of other countries brings not the promised freedom and economic prosperity, but plunges territory into “controlled chaos.” The people in any country should decide their fate independently, without support from the outside.

5. The hope for protecting sport from politics.
The recent Olympics in Rio has become a terrible example of politics interfering in sport. Russian sportsmen, including the paralympic, were subjected to unfair discrimination, and the viewers were deprived of truly spectacular struggle for medals. If such practice continues, then sport will cease uniting mankind altogether.

6. The hope for a new global idea.
Humanity needs not the spreading of democracy and tolerance at all costs, but global unifying ideas. Common dreams and cooperation are better than any conflicts. The world needs an inspiring ideology, for example, combining the efforts of science to defeat incurable illnesses.

7. And the main hope is that Trump won’t change his course in case he is elected President.

From Russia with hope

Katasonova’s demonstration of support for Trump was preceded, the month before, by a show of disdain for Clinton at the same location. For that solo protest, she wore a “Crooked Hillary” T-shirt to the embassy and held aloft a sign that read: “Global Terrorism: The Result of Clinton’s Policy #StopHillary.”

As Jill Dougherty reported for CNN, a second sign in Russian blamed Clinton for starting a “New Cold War.” That sign also featured another word, Peregruzka, or “overcharged.” Wrongly thinking the word meant “reset,” American officials had it printed on a large, red novelty button that Clinton, as secretary of state, presented to her counterpart, Sergey Lavrov, as a goodwill gesture at their first meeting in 2009.

Katasonova also issued a seven-point statement to explain that protest, posting it on Facebook, titled “7 sins of Hillary Clinton: An appeal to the American people.”

“In Russia, all hope is on Trump, because with Hillary it is the dictatorship of force,” Katasonova told CNN in July. “She’s used to solving every problem with force. It’s crazy! But Trump, we hope he is a qualified person, a person who is ready to talk, to compromise.”

Katasonova’s Twitter feed, meanwhile, is filled with anti-Clinton videos and images borrowed from from the alt right, which has earned her the admiration of American white supremacists and extreme nationalists from other parts of Europe, like Nick Griffin, a former leader of the racist British National Party.

Before her embrace of Trump earned her attention from the international media, Katasonova was best known for her elaborate trolling of anti-Putin activists.

For a video Christmas card in 2015, she dressed in winter camouflage and promised that the separatists would achieve victory in Ukraine. And if not, she added, “we will destroy the whole world” in a nuclear holocaust.

Katasonova has also helped lead demonstrations in favor of the Russian intervention in Syria and helped a British video blogger mock supporters of the murdered Russian dissident Boris Nemtsov on the bridge near the Kremlin where he was assassinated last year.