The guest of honor was Vice Adm. Joseph Rixey — the man in charge of the Pentagon agency that administers foreign arms sales. 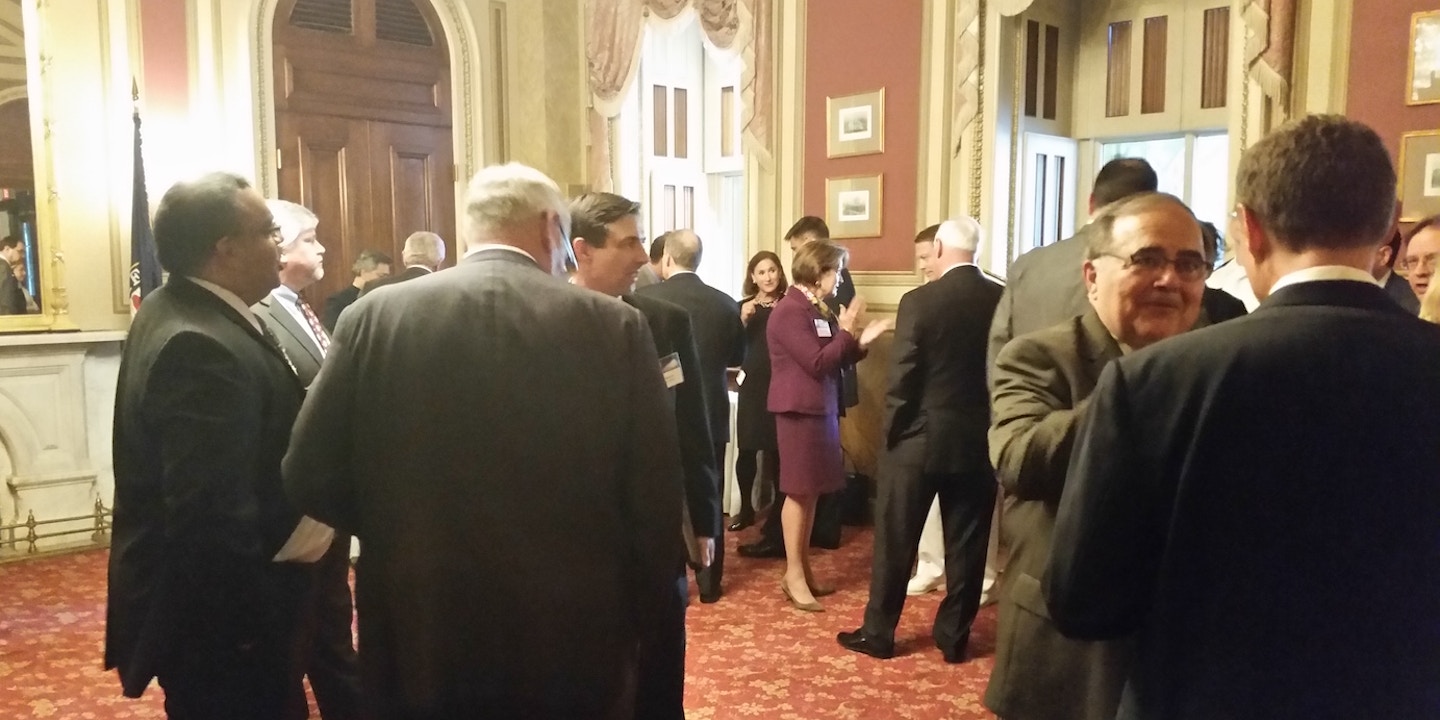 Here’s what passes for funny in a room packed full of weapons-industry executives and lobbyists: When Vice Adm. Joseph Rixey — the man in charge of the Pentagon agency that administers foreign arms sales — said “I know you don’t go after human rights violators for potential customers.”

The line produced chuckles in the room.

Rixey was the guest of honor at a reception Wednesday hosted by the Senate Aerospace Caucus, a group of more than a dozen senators who “work to ensure a strong, secure, and competitive American aerospace sector,” according to their mission statement online. The event in a sumptuous Senate reception room was cohosted by the Aerospace Industries Association (AIA), the lobbying group for weapons contractors like Lockheed Martin, Boeing, Northrop Grumman, and Raytheon.

Rixey is the director of the Defense Security Cooperation Agency (DSCA), the Pentagon agency charged with overseeing the Pentagon’s relations with the militaries of U.S. allies. As such, DSCA plays a key role in many foreign military sales to other countries, often acting as an intermediary and looking for a producer in the United States.

In other words, when foreign countries want to buy U.S. weapons, the DSCA finds them — either in U.S. stockpiles, but more often by signing lucrative contracts with defense contractors. According to Rixey, over the past year, the DSCA has approved upwards of $47 billion in such contracts, for weapons transfers to countries like Egypt, Israel, and Saudi Arabia. 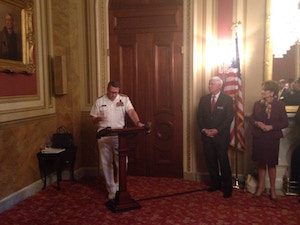 The AIA chair, Lockheed Martin CEO Marilyn Hewson, showered Rixey with praise. “As director of the Defense Security Cooperation Agency, Adm. Rixey performs a crucial role in this effort. Thank you admiral for all that you do, to help, and thank you for being here tonight, but for all that you do in helping us to sell our products and to partner with countries around the world,” she said.

AIA President David Melcher also had warm words. “Joe Rixey’s done tabletops with industry and with his own team, he’s done the right things to try and move this thing along, and I couldn’t be more pleased to introduce somebody who really is trying to make a difference and make government work,” he said.

In his own remarks, Rixey lauded the relationship between the DSCA and industry. “We at DSCA are thankful that we have the support of our counterparts within the United States government and with defense industries as we look to find areas we can continue to collaborate, improve efficiencies, and overall effectiveness,” he said.

Rixey was joined by caucus co-chairs Sens. Jerry Moran, R-Kan., and Patty Murray, D-Wash., who praised the industry for its role in overseas weapons sales on both foreign policy and economic grounds. As they spoke alongside representatives from the weapons industry, guests were treated to an open bar, and an assortment of food that included artisan cheeses, chocolate covered strawberries, and macarons. “The aerospace industry helps keep the world safe and stable by strengthening our relationships with our allies and building our partners’ capabilities,” Murray told the arrayed lobbyists. “I want to thank all of you again for being here tonight and your interest in what I consider to be one of — if not the most — important industries in my home state of Washington, and America.” Boeing is the largest private employer in Washington state.

Moran asked AIA for its help in passing appropriations bills.

“If you can help us advocate both here in the Senate and with our colleagues in the House, beg us, insist, hold the proverbial gun to our head to make certain that we do appropriations bills when we return in December,” he said.

Officials from the group thanked the senators for their support. Murray has long been an advocate for robust spending on aerospace industry priorities, as has Moran.

“On behalf of the entire industry we thank you very much for your support,” Hewson told Moran and Murray.

The 2007 Honest Leadership and Open Government Act was meant to stop lobbyists from treating lawmakers and government officials to fancy dinners, or lavish parties. But the law had many loopholes — including a notorious “toothpick rule” allowing them to serve as much finger food as guests can eat.

Top photo: The CEO of Lockheed Martin and others mingle at a Capitol Hill event with the DSCA chief on Sept. 14.