Students have a constitutional right not to participate in rituals surrounding the national anthem and Pledge of Allegiance, but they are facing punishment and threats for their gestures of dissent. 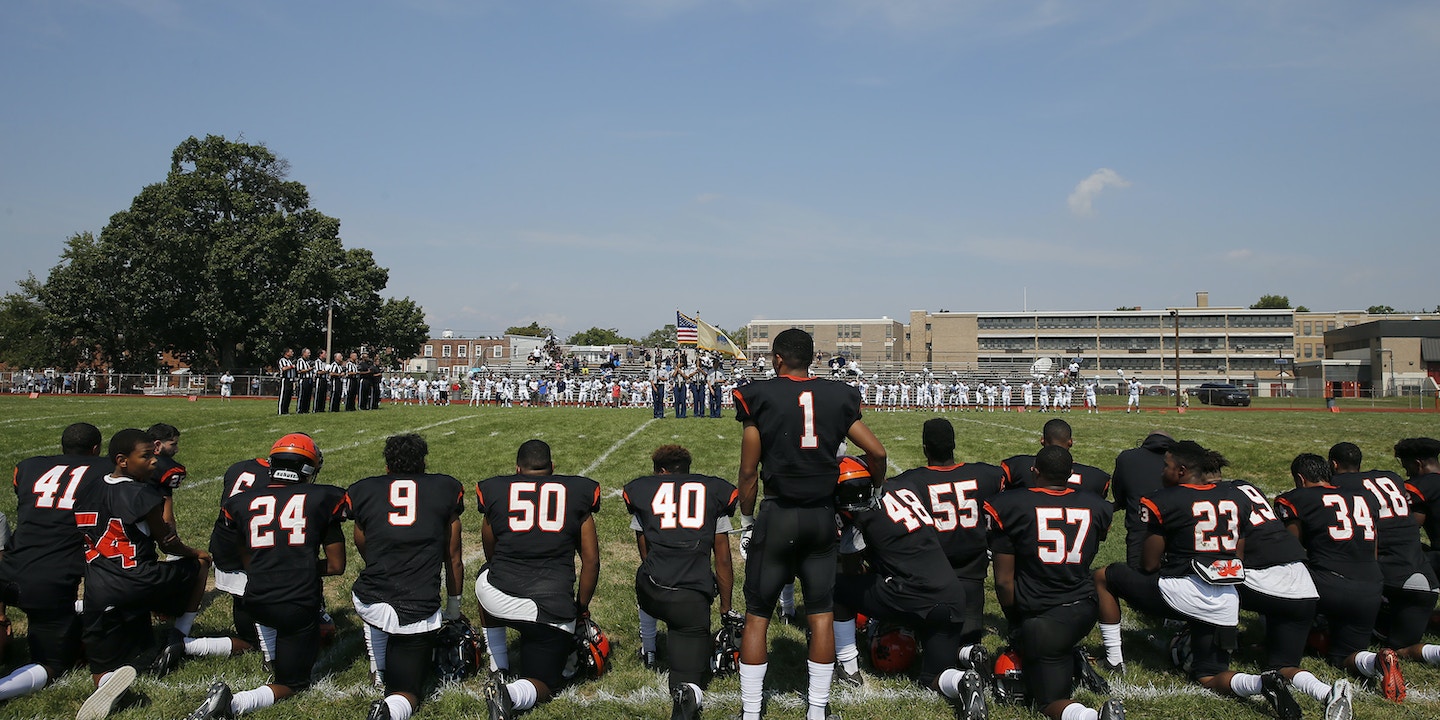 Students are being threatened with punishment for not participating in rituals surrounding the national anthem or Pledge of Allegiance — and they are fighting back.

Since NFL 49ers quarterback Colin Kaepernick sat during the national anthem in August to protest oppression of people of color, many Americans, particularly professional athletes and students, have followed suit. But their constitutional right to engage in such gestures of dissent is not always being respected.

Threats from school administrators and teachers have put free speech advocates like the ACLU on high alert. At Lely High School, a public school in Naples, Florida, the principal told students that they would be removed from athletic events if they refused to stand during the national anthem — though he said the quote was misunderstood when the ACLU of Florida reached out.

“You will stand, and you will stay quiet. If you don’t, you are going to be sent home, and you’re not going to have a refund of your ticket price,” Lely High School Principal Ryan Nemeth told students.

“The Supreme Court ruled in 1943 that public schools may not constitutionally force students to salute the flag,” Lee Rowland, a First Amendment attorney who works with the ACLU, told The Intercept. “That ruling is crystal clear about a student’s right not to be compelled into patriotism by their government, and it is over 70 years old.”

The ruling that Rowland references came after many Jehovah’s Witnesses in the United States began to refuse to salute the flag in solidarity with their brethren in Nazi Germany who were being arrested for refusing to salute that country’s fascist flag.

The action by the American Jehovah’s Witnesses provoked a backlash, and a number of followers of the faith were persecuted for refusing to salute. In West Virginia, a family of Jehovah’s Witnesses brought suit after their children were sanctioned for doing so.

The court ruled in favor of the family. In his opinion, Supreme Court Justice Robert Jackson wrote, “Compulsory unification of opinion achieves only the unanimity of the graveyard.”

Notwithstanding this history, students exercising their right are now being challenged.

In Worcester, Massachusetts, a high school football player was told that he would be forced to sit out a game for kneeling during the national anthem — since then, his suspension was terminated.

“I’m standing up for the injustice that happens to black people every day, not just cops killing black people. We are disrespected and mistreated everywhere we go on a daily basis because of our skin color and I’m sick of it,” Mike Oppong, a junior at Doherty Memorial High School, told a reporter.

A student at Lower Lake High School in Lower Lake, California, Leilani Thomas, was punished for the first time since she first began sitting out the Pledge of Allegiance in second grade.

Thomas, a member of the Native American Pomo Tribe, is protesting the United States’ systematic abuse of native peoples. After a teacher lowered her grade for sitting, the school moved Thomas to a class with a different teacher.

Students at private schools do not enjoy the same constitutional protections.  The Diocese in Camden, New Jersey, which oversees six local private Catholic schools, will punish student athletes who do not stand during the national anthem by suspending them for two games. In a letter, the organization wrote, “The best approach is helping our young people understand that blood was sacrificed so that we all can enjoy the gifts of our faith and our country. However, let me be clear. We are not public institutions and free speech in all of its demonstrations, including protests is not a guaranteed right.”

At least one student at a public school, Shemar Cooper, was grabbed by his teacher when he sat during the Pledge of Allegiance. Cooper, a 15-year-old student at Eisenhower High School in Blue Island, Illinois, said that a teacher tried to pull him out of his seat during the pledge.

“America doesn’t respect blacks,” he told WGN News. “Until they stop killing us, I’m not going to stand up.” The teacher has since been punished.

Some students, like Kaepernick himself, have received death threats. Eleven-year-old Jaelun Parkerson of Beaumont, Texas, received threats after he led his football team in kneeling during the national anthem. “It just makes me sad and scared,” he told ABC13.

Local police and the NAACP are investigating lynching threats in Brunswick, Ohio, where a high school football player named Rodney Axon Jr. was targeted after kneeling during the national anthem, according to Fox 8.