Apple Logs Your iMessage Contacts — and May Share Them With Police

When you make a new text on your iPhone and enter a number, it gets sent to Apple, which logs it, according to a law enforcement document we obtained. 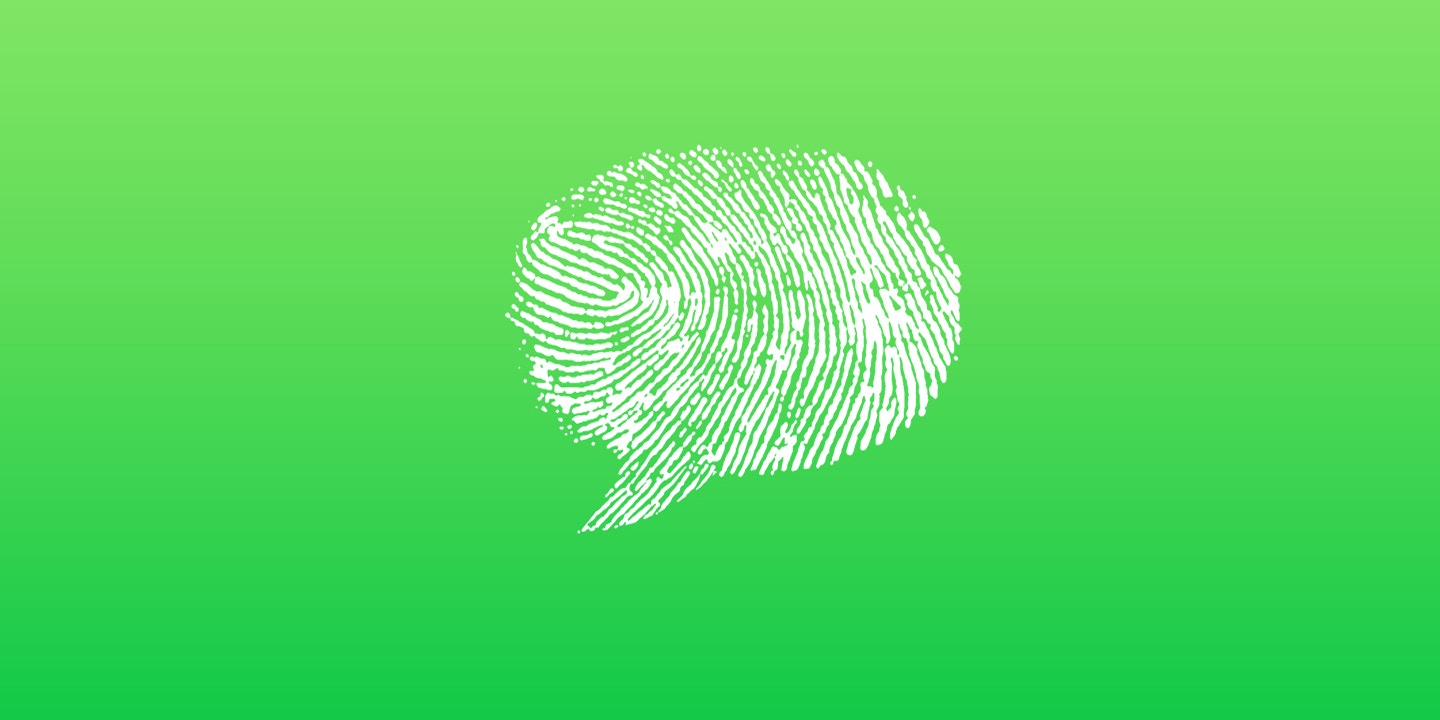 Apple promises that your iMessage conversations are safe and out of reach from anyone other than you and your friends. But according to a document obtained by The Intercept, your blue-bubbled texts do leave behind a log of which phone numbers you are poised to contact and shares this (and other potentially sensitive metadata) with law enforcement when compelled by court order.

Every time you type a number into your iPhone for a text conversation, the Messages app contacts Apple servers to determine whether to route a given message over the ubiquitous SMS system, represented in the app by those déclassé green text bubbles, or over Apple’s proprietary and more secure messaging network, represented by pleasant blue bubbles, according to the document. Apple records each query in which your phone calls home to see who’s in the iMessage system and who’s not.

This log also includes the date and time when you entered a number, along with your IP address — which could, contrary to a 2013 Apple claim that “we do not store data related to customers’ location,” identify a customer’s location. Apple is compelled to turn over such information via court orders for systems known as “pen registers” or “trap and trace devices,” orders that are not particularly onerous to obtain, requiring only that government lawyers represent they are “likely” to obtain information whose “use is relevant to an ongoing criminal investigation.” Apple confirmed to The Intercept that it only retains these logs for a period of 30 days, though court orders of this kind can typically be extended in additional 30-day periods, meaning a series of monthlong log snapshots from Apple could be strung together by police to create a longer list of whose numbers someone has been entering.

The Intercept received the document about Apple’s Messages logs as part of a larger cache originating from within the Florida Department of Law Enforcement’s Electronic Surveillance Support Team, a state police agency that facilitates police data collection using controversial tools like the Stingray, along with conventional techniques like pen registers. The document, titled “iMessage FAQ for Law Enforcement,” is designated for “Law Enforcement Sources” and “For Official Use Only,” though it’s unclear who wrote it or for what specific audience — metadata embedded in the PDF cites an author only named “mrrodriguez.” (The term “iMessages” refers to an old name for the Messages app still commonly used to refer to it.)

Phone companies routinely hand over metadata about calls to law enforcement in response to pen register warrants. But it’s noteworthy that Apple is able to provide information on iMessage contacts under such warrants given that Apple and others have positioned the messaging platform as a particularly secure alternative to regular texting.

The document reads like a fairly standard overview that one might forward to a clueless parent (questions include “How does it work?” and “Does iMessage use my cellular data plan?”), until the final section, “What will I get if I serve Apple with a [pen register/trap and trace] court order for an iMessage account?”: 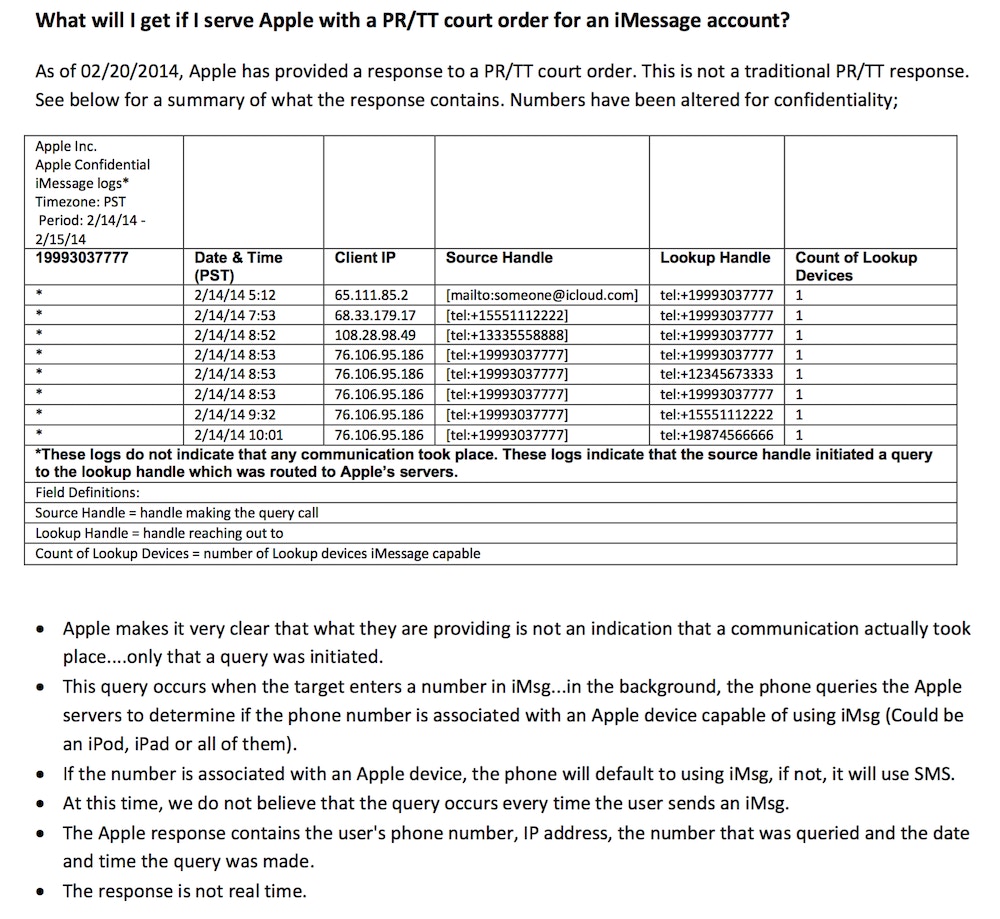 This is a lot of bullet points to say one thing: Apple maintains a log of phone numbers you’ve entered into Messages and potentially elsewhere on an Apple device, like the Contacts app, even if you never end up communicating with those people. The document implies that Messages transmits these numbers to Apple when you open a new chat window and select a contact or number with whom to communicate, but it’s unclear exactly when these queries are triggered, and how often — an Apple spokesperson confirmed only that the logging information in the iMessage FAQ is “generally accurate,” but declined to elaborate on the record.

Illustration: Selman Design for The Intercept

When law enforcement presents us with a valid subpoena or court order, we provide the requested information if it is in our possession. Because iMessage is encrypted end-to-end, we do not have access to the contents of those communications. In some cases, we are able to provide data from server logs that are generated from customers accessing certain apps on their devices. We work closely with law enforcement to help them understand what we can provide and make clear these query logs don’t contain the contents of conversations or prove that any communication actually took place.

And it’s true, based on the sample information provided in the FAQ, that Apple doesn’t appear to provide any indication whatsoever that an iMessage conversation took place. But a list of the people you choose to associate with can be just as sensitive as your messages with those people. It requires little stretching of the imagination to come up with a scenario in which the fact that you swapped numbers with someone at some point in the past could be construed as incriminating or compromising.

“How often are lookups performed? Does opening [an iMessage] thread cause a lookup? Why is Apple retaining this information?”

The Florida Department of Law Enforcement did not return a request for comment.

The fact that Apple is able and willing to help the government map the communications networks of its users doesn’t necessarily undermine the company’s posturing (and record) as a guardian of privacy, though this leaked document provides more detail about how the iMessages system can be monitored than has been volunteered in the past. Ideally, customers wouldn’t need to read documents marked “For Official Use Only” in order to know what information Apple may or may not disclose to the police. In a section of its website devoted to touting the privacy safeguards in its products, Apple claims that “your iMessages and FaceTime calls are your business, not ours. … Unlike other companies’ messaging services, Apple doesn’t scan your communications, and we wouldn’t be able to comply with a wiretap order even if we wanted to.”

In 2013, after Apple was revealed to be among the tech companies caught up in an NSA surveillance program known as PRISM, which tapped into customer information on the central servers of nine leading internet companies, the company released a rare statement regarding its “commitment to customer privacy,” insisting that it would be unable to share sensitive customer data even if it wanted to:

For example, conversations which take place over iMessage and FaceTime are protected by end-to-end encryption so no one but the sender and receiver can see or read them. Apple cannot decrypt that data. Similarly, we do not store data related to customers’ location, Map searches or Siri requests in any identifiable form.

Questions of how much Apple could or would aid police if asked vaulted back into headlines following the mass shooting in San Bernardino last year, which left the FBI in possession of the shooter’s iPhone, which it was unable initially to decrypt. Apple balked at demands that it help crack the phone, allowing it to enjoy a reputation as not just a maker of expensive electronics, but a determined privacy advocate. We need more technology companies that are willing to take public, principled stands in defense of our private lives, but these same companies should follow through with technical transparency, not just statements.