The Fox News anchor tried to warn the candidate that Hillary Clinton would bring up his long history of insulting women in crude terms, but he refused to listen. 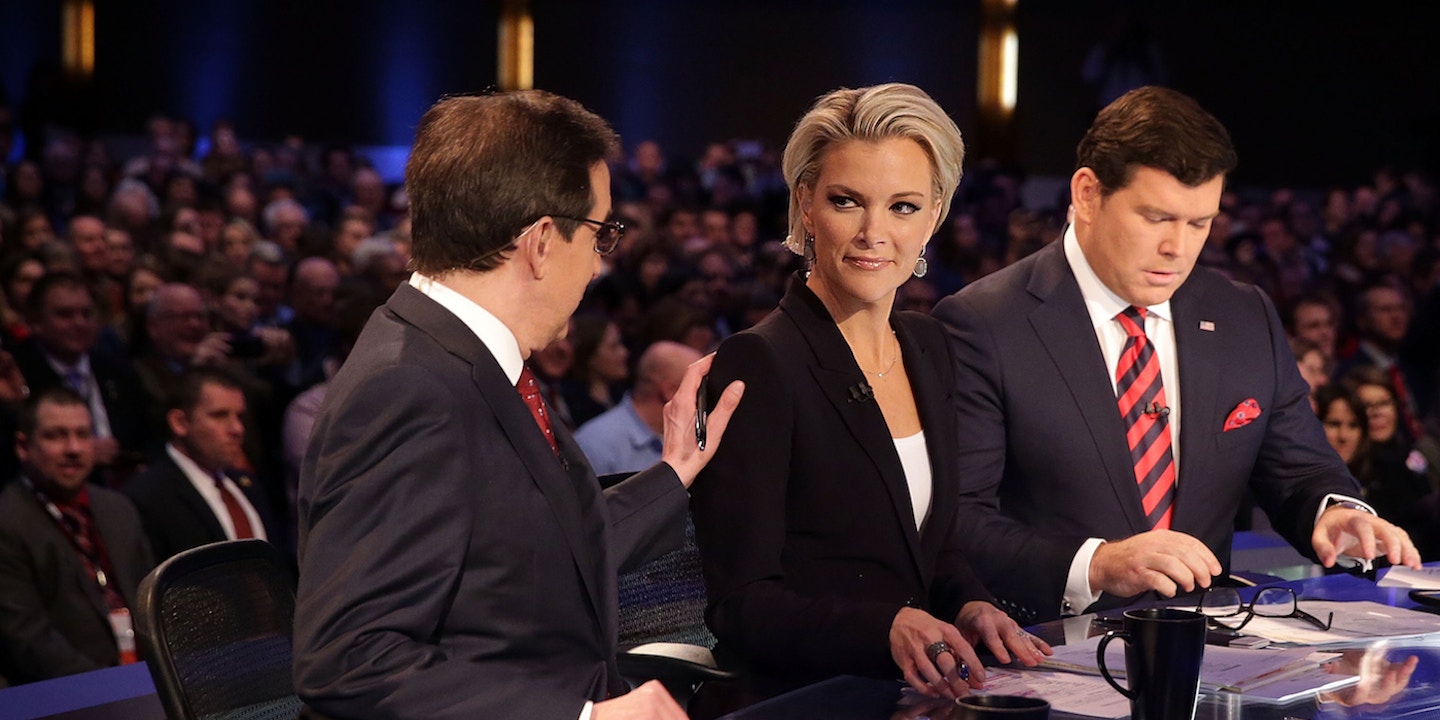 Megyn Kelly tried to warn Donald Trump, 13 months ago, that his sexist remarks about women would become an issue. He refused to listen — preferring to attack the messenger instead. Or maybe Trump was simply unable to comprehend that his long history of insulting women in crude terms might not seem funny to voters who live outside the Fox News bubble.

But Trump’s flailing attempt to respond to Hillary Clinton’s charge, in Monday’s debate, that he has a pattern of sexist comments about women stretching back decades, suggests that the candidate might have been better off listening to Kelly than to his current adviser, her former boss Roger Ailes.

In August 2015, Kelly’s first question for Trump in the first debate of the Republican primary campaign noted that while his supporters love that “you speak your mind, and you don’t use a politician’s filter,” his insult-comic approach “is not without its downsides, in particular when it comes to women.”

“You’ve called women you don’t like ‘fat pigs,’ ‘dogs,’ ‘slobs,’ and ‘disgusting animals,’” Kelly continued. “Your Twitter account –” and here, without waiting to hear her question, Trump interrupted Kelly, leaning into his mic to say, “Only Rosie O’Donnell.”

After being forced to wait more than 15 seconds for the partisan audience in the Fox News debate hall to finish laughing at Trump’s dig at the liberal comedian, Kelly pointed out that his defense was both untrue and beside the point.

“No it wasn’t,” she said. “For the record, it was well beyond Rosie O’Donnell. Your Twitter account has several disparaging comments about women’s looks. You once told a contestant on ‘Celebrity Apprentice’ it would be ‘a pretty picture’ to see her on her knees.”

“Does that sound to you like the temperament of a man we should elect as president?” she asked. “And how will you answer the charge from Hillary Clinton, who is likely to be the Democratic nominee, that you are part of the war on women?”

Trump, visibly irritated, replied by dismissing his insults as jokes — “It’s fun, it’s kidding, we have a good time” — and trained his anger back on the female anchor for not taking them that way. “What I say is what I say, and honestly, Megyn, if you don’t like it, I’m sorry,” he said. “I’ve been very nice to you, although I could probably maybe not be, based on the way you have treated me — but I wouldn’t do that.”

Trump, of course, was just getting started, launching a multimedia assault on the Fox News anchor over the coming days and months in which he seemed to illustrate her point, hinting on Twitter that she was “a bimbo” and suggesting to CNN that she might have been angry with him because of her menstrual cycle.

I refuse to call Megyn Kelly a bimbo, because that would not be politically correct. Instead I will only call her a lightweight reporter!

We know now how prescient Kelly was. Clinton, on Monday night, replied to a question about Trump saying she did not have “a presidential look” by quoting the same litany of insults he has used against women who criticized him, and then mentioning his public humiliation of the former Miss Universe, Alicia Machado.

Despite having 13 months between the two debates to come up with a better answer, Trump had none.

That one of his debate coaches is Ailes, the Fox News creator who was recently forced out of the network for the alleged sexual harassment of many women, including Kelly, might have something to do with it.

On Monday night, all Trump had to offer were the very same excuses: first dismissing his remarks as “said in entertainment,” and then falsely claiming his words were aimed solely at a comedian he feuded with over the airwaves a decade ago.

“Somebody who’s been very vicious to me, Rosie O’Donnell, I said very tough things to her,” Trump admitted, before immediately excusing himself. “I think everybody would agree that she deserves it,” he said, apparently referring to the minority of Americans glued to Fox News, “and nobody feels sorry for her.”

In sharp contrast to the Fox News primary debate, when his jab at O’Donnell delighted the partisan crowd, his reference to her on Monday night fell flat, with even Trump’s planted cheering section in the hall failing to laugh. It also baffled millions of debate viewers who were unaware of Trump’s long-running spat with the comedian and sparked curiosity about what she could have said about him that was so “vicious” that he would refer to it 10 years later, in a job interview to be president of the United States.

top google searches in Islamic State: who is Rosie O'Donnell?

In response, the comedian shared video on Twitter of her mockery of Trump on the December 20, 2006, edition of the daytime television show “The View,” which, as she said, he “can’t seem to get over.”

The clip reveals that what O’Donnell did to so enrage Trump was to scoff at him for holding a press conference to announce that he would not be taking away the title of Miss USA from a young woman who was caught drinking and taking drugs at a nightclub. After doing a broad impression of Trump, O’Donnell said: “He annoys me on a multitude of levels. He’s the moral authority: left the first wife, had an affair, left the second wife, had an affair, had kids both times, but he’s the moral compass for 20-year-olds in America.”

She then went on to skewer Trump for inheriting wealth from his father and using bankruptcy laws to repeatedly bail himself out and not pay his creditors. “This is not a self-made man,” she said. “I just think that this man is like sort of one of those, you know, snake-oil salesmen,” she added.

Oddly enough, the archival video also shows that the segment after O’Donnell’s riff was a chat with then-Senator Hillary Clinton. Trump himself had appeared on “The View” as a guest earlier that year, alongside his daughter Ivanka, and joked that “if Ivanka weren’t my daughter, perhaps I’d be dating her.”

Given that Kelly originally asked Trump last year if his tirades about women who criticized him — an enemies list that also includes Gail Collins, Arianna Huffington, and Bette Midler — suggested that he might not have “the temperament of a man we should elect as president,” it is remarkable to look back now at just how much energy he devoted to nursing that grudge against O’Donnell in public at the time. (It is also worth noting that Trump’s claim during the debate on Monday that he has “a much better temperament” than Clinton did prompt audible laughter in the debate hall, and from undecided voters in at least one focus group.)

Some of his comments were made in showbiz venues, like “Entertainment Tonight” and the “Late Show,” but, remarkably, Trump was also interviewed about the spat on all three major cable news networks — speaking on Fox with Bill O’Reilly, on MSNBC with Don Imus, and on CNN with Larry King and then Anderson Cooper, who will moderate next week’s presidential debate.

Foreign diplomats might soon be studying Trump’s cascade of television appearances in the months following O’Donnell’s mockery for tips on how to take advantage of an American president with such incredibly thin skin.

Those clips are also worth watching now as a sort of time capsule reminder of a moment in the not-too-distant past when Trump was firmly established as an entertainer — with him ranting about O’Donnell mocking his hair on MSNBC, for instance, even as the on-screen news ticker refers to George W. Bush deploying more troops to Iraq and U.S. forces detaining Iranians in Kurdistan.

The same video evidence also offers clues as to how Trump turned a career of self-promotion for his entertainment and real estate ventures into a public profile that convinced millions of Americans to consider putting him in charge of our government. The contemporary reports show how enthusiastically broadcast journalists treated the tabloid subject of the developer’s personal life as significant news worthy of airtime.

The following year, Trump continued to attack O’Donnell, even though, he admitted, she had by then refused to say anything more about him. During a return engagement on Larry King’s CNN talk show, Trump claimed the comedian “ate like a pig” at one of his weddings.

During a lecture on the real estate business for the adult-education Learning Annex, he fantasized about hitting her “big pig face right smack in the middle of the eyes.” He then told the same audience that he had done something heroic by standing up to O’Donnell, because she had bullied him. “When you deal with a bully, which is what she is,” he said, “when you deal with a bully, and I learned it in high school, you’ve got to hit a bully really hard, really strong, right between the eyes.”

A full five years later, on the video blog Trump used to promote both “The Apprentice” and his possible candidacy for the 2012 Republican presidential nomination, the grudge was still driving him to devote energy to trashing O’Donnell.

In the days following this week’s debate, having walked into the very trap Kelly had warned him Clinton would set, Trump was forced further on the defensive over his remarks about Machado. The former beauty queen, in several media appearances arranged by the Clinton campaign, recalled how Trump mocked her for gaining weight after winning the pageant he owned by calling her “fatty,” and “Miss Eating Machine.”

This morning: "She gained a massive amount of weight...it was a real problem." pic.twitter.com/0wrISjJe6z

CNN dug out its own footage of the publicity stunt Trump staged in 1997, in which he surprised Machado by inviting dozens of camera crews and photographers to watch her work out in an effort to lose weight.

Completing the circle, on Tuesday Machado was interviewed, sympathetically, by Kelly, who began by noting that “the Trump campaign can’t really deny that he harassed you over your weight, because it’s on camera.”

Kelly also reminded Machado that she told the Washington Post in 1997 that she did have an eating disorder before Trump mocked her — a condition perhaps inspired by the taunting of a Trump-like figure, Osmel Sousa, who ran the Miss Venezuela contest she won before Miss Universe. In subsequent interviews, however, Machado insisted that Trump’s taunting had scarred her for years afterward, and convinced her that someone so cruel to women should not be president.

Top photo: Megyn Kelly looked at co-moderator Chris Wallace before a Republican primary debate in Iowa that Donald Trump skipped in January after clashing with her at a debate five months earlier.