Five Years After the Brooklyn Bridge Arrests, the Occupy Wall Street Worth Remembering

We miss a useful lesson in radical political history if we confine Occupy’s memory to the thing that laid the ground for Bernie Sanders’s campaign and “changed the conversation.” 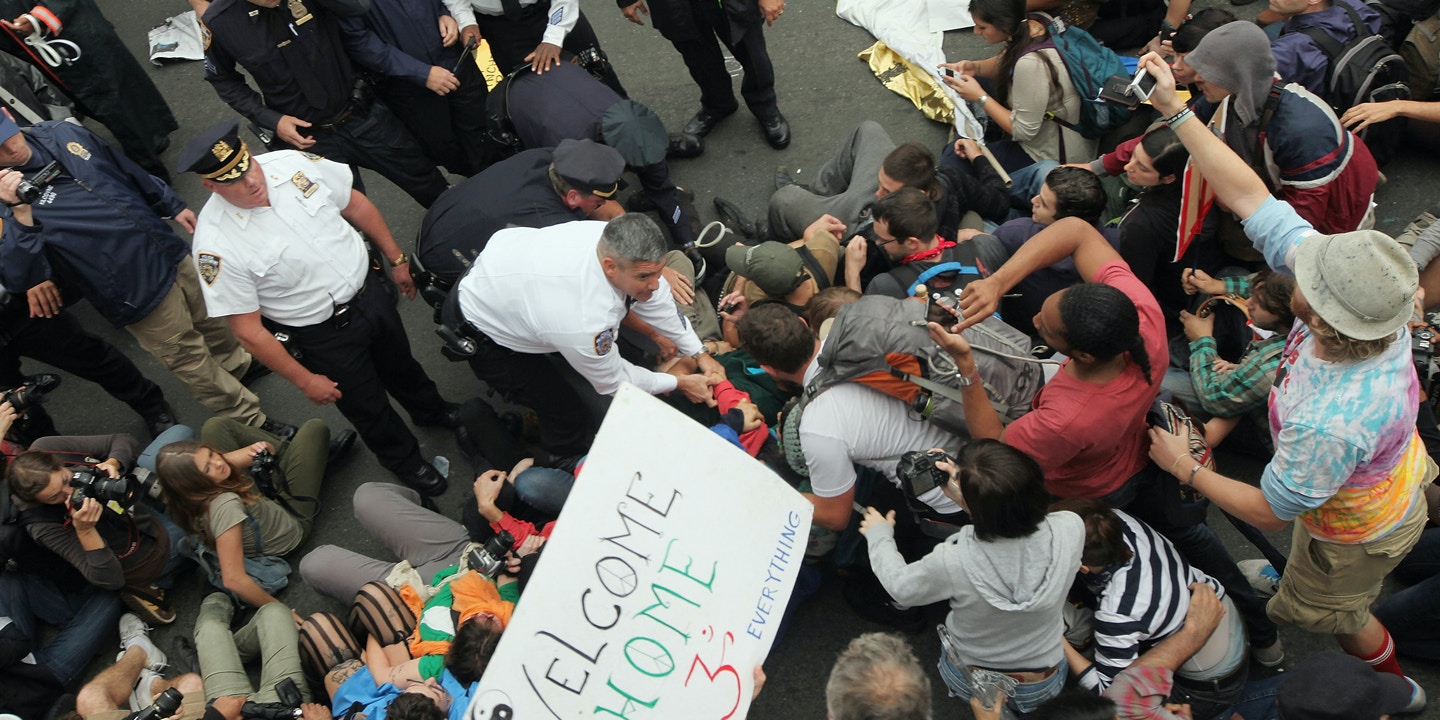 Occupy Wall Street didn’t begin for me on September 17, 2011. I was there when Zuccotti Park was first claimed by activists and the encampment began, but I didn’t see much potential that first day on a drab stretch of lower Manhattan concrete. For me, Occupy began later, on October 1, when 700 people were arrested on the Brooklyn Bridge, myself included. A timeless protest recipe (mix collective direct action and police stupidity) blocked a major New York City artery for hours; then around the country, the heartbeat of something happening grew louder.

I can calendar mark an anniversary, but I can’t date Occupy’s end for me — it was a fizzling, a burnout, a failure to re-emerge after hiatus. But it did end. The more radical, on-the-ground actions emanating from Occupy camps were shut down by police, while the messaging lived on, funneled into political campaigns.

On September 17, 2016, a handful of onetime Occupy participants returned to Zuccotti Park to mark five years since the camp’s inception. They paid homage with cardboard signs carrying anti-capitalist slogans and spoke to the few journalists who were present, answering questions about the presidential election. Caleb Maupin, 28, told The Guardian that he thought the Sanders campaign was like “a giant Occupy Wall Street rally.” “Every candidate wants you to think they are the Occupy candidate,” he said. There was a time, five years ago, when for many of the protest participants, the term “Occupy candidate” was an oxymoron.

It “changed the conversation.” That much has been said, again and again, of Occupy Wall Street in the years since the brief but intense flourish of encampments, marches, and political direct action that began in New York in September 2011. What this tends to mean is that issues of income inequality, banking regulation, and raising the minimum wage — and phrases like “the 99 percent” and “the 1 percent” — have been picked up by politicians and recognized by major media institutions. And there’s truth to it. One need look no further than the popularity (especially among the young) of the self-described democratic socialist who wanted to be president.

The problem with Occupy’s legacy as primarily a “conversation changer” is that the protest moment gets framed as a set of talking points — a corrective to mainstream political discourse alone. “Occupy” has been historicized as a slogan and forgotten as a tactic and a verb. This is understandable: Historians bestow the title “success” on that which continues — after all, “to succeed” doesn’t just mean to win, but also to follow and replace. But we miss a useful lesson in radical political history if we confine Occupy’s memory to the thing that laid the ground for Sanders’s campaign and “changed the conversation.” I had reported on the protests from their earliest planning stages while stringing for the New York Times, before (with some controversy) aligning myself with the activists, particularly those invested in an anarchist politics of opposition to representative democracy. Occupy, for me, was an experiment in burdensome consensus-based decision-making and a commitment to creating new, untested political spaces.

Former occupiers who turned their energies to the so-called Sanders revolution stress that more than just talking points have carried through. Modes of horizontal, rhizomatic organizing, and the deployment of a network of over 50 Twitter and Facebook accounts by the People for Bernie activist coalition, all began in the context of Occupy. The @OccupyWallStNYC Twitter account (with its 205K followers) was taken over by former occupiers using the platform to support Sanders. Recalling the fierce disagreements that characterized the internal politics of Occupy, this recuperation of the handle even led to a lawsuit.

For some, the coalescence of Occupy ideas and networks into a coherent political campaign had been a goal since the early days of the Zuccotti Park camp. For just as many others, Occupy’s raison d’être was a fierce autonomy and a refusal to be co-opted into political parties, however sympathetic their leader and platform might be.

“As time goes on, Occupy is remembered as a movement for the 99 percent, against Wall Street, dealing with income inequality. Most people talk about the legacy on this discursive level,” Marisa Holmes, an activist, filmmaker, and former New York occupier, told The Intercept. “This misses so much of the day-to-day action, and the more radical anarchistic politics we engaged in.”

The suggestion is not that discourse doesn’t matter — discourse shapes policies and delineates the political imaginary. To focus on this alone, however, does historical discredit to the importance of Occupy’s form — a banner under which to create public spaces and forums and to intervene in the assumption that politics is just about voting or supporting candidates or joining campaigns.

Consider the several hundred protesters camping with the Standing Rock Sioux Tribe, protesting the Dakota Access Pipeline construction. The question of occupation is complicated here by the fact that it is Sioux land under threat by the pipeline. But the strength of the protest tactic reminds us of the history of contesting colonized space by physically taking it (back) — this is the political history in which Occupy belongs. Sen. Sanders has stood with the protestors at Standing Rock, and elsewhere, which recalls a different Occupy legacy worth preserving: If elected officials turned up, they stood with the group, in the group, not for the group. Holmes this year produced a documentary based on hours of archived footage from the Zuccotti Park camp and post hoc interviews with many of those involved. She sees it as a defense of an important part of the protest moment’s history. “If we erase the history of collective action and resistance, it becomes less possible to produce it in the future. If something is reduced to just rhetoric, then that’s all that’s seen as possible,” Holmes said. She added that part of the overlooked legacy of Occupy is the context in which it arose.

The linear story is that the Vancouver-based culture-jamming magazine Adbusters called for a day of “revolution” to Occupy Wall Street, and New York’s activists listened. What’s missed here is that Occupy did not begin in New York. In North Africa, the Middle East, and Southern Europe, 2011 was an insurrectionary year organized around politically autonomous camps holding space in city squares. The U.S. protests were not simply demonstrations against Wall Street, but experiments in direct democracy responding to, acting in solidarity with, and taking up the tactics of organizers, anarchists, and anti-authoritarians far beyond the West.

“There was an international context, which is not so easily recuperated into U.S. party formulations,” Holmes said. The filmmaker saw the spirit of Occupy in France this year during the Nuit debout (rise up all night) protests and occupation of Paris’s Place de la République against new labor codes and the implementation of repressive anti-terror measures. Like Occupy, Nuit debout was leaderless and engaged in direct democracy through public assemblies and working groups, not politicians. Like Occupy, its physical occupations didn’t last long, but the protest banner remains in use.

The camps were not built for perpetuity; Occupy’s space-taking tactics were by their nature ephemeral. But nor were the camps just pop-ups, designed as conversation starters for a better mainstream politics. They were experiments in autonomous political organization of both day-to-day life, including provision of food (in the tradition of the Black Panthers providing free breakfasts for community kids), and disrupting the city’s business-as-usual.

“I’m loath to relate my time in Occupy to my time in Black Lives Matter,” said Carrefour, whose involvement with BLM began when he joined the protests in Baltimore last year following the police killing of Freddie Gray. “BLM seems to be the successful realization of that dream of a social movement that can span years, propelled by affinity group action. And BLM has just rejected all the old attempts to impose bureaucratic management on social movements to the point that it’s just its own thing beyond any measure we have.”

“Occupy’s fundamental mistake was that it did not have a policy of fighting white supremacy and racial justice that made it central,” Nicholas Mirzoeff, an activist and professor of media, culture, and communication at New York University, told The Intercept. Occupy had a “people of color caucus,” as if the struggle against white supremacy and the capitalism structured around it, not to mention police brutality, could be mere auxiliary issues in the fight for equality in America.

“The movement cares about national politics, and many participants have sought to make presidential candidates responsive to their political concerns,” noted a July post on BlackLivesMatter.com. “However, there is deep skepticism about whether the American system is salvageable, because it is so deeply rooted in ideas of racial caste.” The centering of racial struggle renders the movement resistant to co-optation by a mainstream politics, which, at very best, just recognizes racism as one of society’s problems.

The Sanders campaign echoed Occupy’s failure to articulate a racial politics; this is a legacy to recognize and end. It’s not enough to “change the conversation” if the same speakers are still talking the loudest — and that includes even the most well-intentioned proto-socialists, shouting on the sidelines as a neoliberal hawk and maniacal tangerine xenophobe uphold the current political fulcrum.