The head of a group of Syrian first responders spoke to The Intercept about their work, which is featured in a Netflix documentary, and the threats under which they operate. 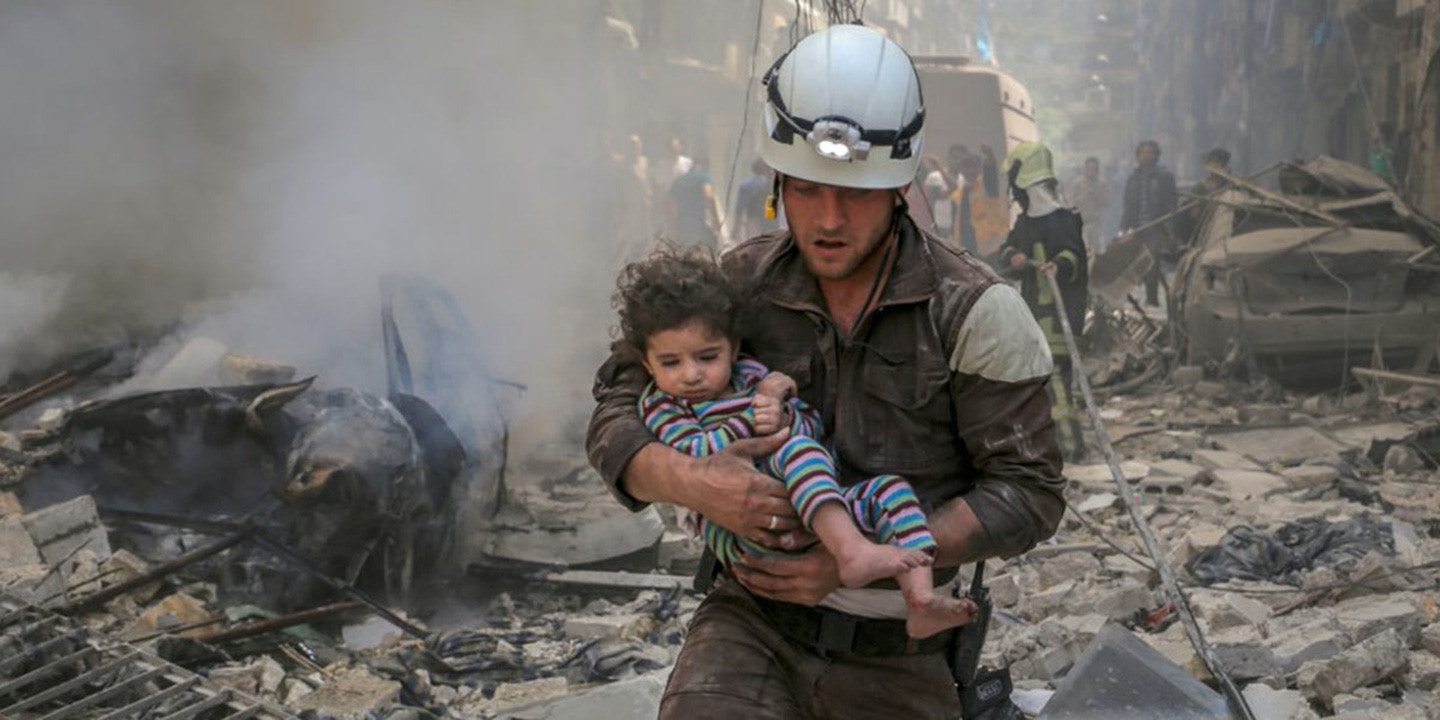 Raed al-Saleh says that before Syria’s civil war, he could never have imagined the position he is in today. A former electronics trader from the northwestern town of Jisr al-Shughour, Saleh, 33, is now head of the Syrian Civil Defense, a volunteer force dedicated to rescuing victims of bombings and shellings. The 3,000-member group, also known as the White Helmets, are first responders at the scenes of airstrikes by Russian and Syrian government forces, pulling survivors from the rubble of collapsed apartment buildings and homes.

Saleh spends most of his time between Turkey and opposition-held areas of northern Syria, but he is currently visiting the United States to promote the Civil Defense’s work as well as a new Netflix documentary about the group. Soft-spoken and reserved, Saleh expresses deep frustration over the civil war that upended his quiet life, thrusting him almost by accident into an extremely dangerous occupation. “Starting from 2011, after the government’s crackdown began, I started helping with humanitarian relief and the evacuation of wounded people in our area following attacks,” he told The Intercept during an interview in New York this week. “We got experience from this practical work and later received some training from a Turkish NGO. By 2013, we started to do search-and-rescue work after airstrikes, and that year created the Civil Defense.” Raed al-Saleh, head of the Syrian Civil Defense group, also known as the White Helmets, during an interview in Berlin on March 22, 2015.

The group’s work has garnered international attention, including a Nobel Peace Prize nomination as well as the Netflix documentary, which is titled “The White Helmets.” The film chronicles the experiences of several members of a Civil Defense unit in Aleppo, following them between missions as they spend time with their families, conduct training, and reflect on their reasons for volunteering with the group. It also includes harrowing footage of government airstrikes on the city. The aftermath of many such aerial attacks, recorded by Civil Defense members and broadcast on social media, has provided crucial evidence of government war crimes and attacks against civilian targets.

But the attention the group has received has also made it a target of the Syrian government and the Russian forces that support it. In recent days, Russian airstrikes reportedly struck three Civil Defense headquarters in Aleppo, destroying one of the few lifelines available to civilians in the besieged city. “They are not happy that there is a success story in Syria that is receiving attention from the world,” says Saleh. “They are targeting us because we have become a critical source of information about what is happening in Aleppo. We document the attacks against civilian neighborhoods, and we pass the messages from the ground to the world.”

Civil Defense is one of the only aid organizations still operating in these bleak circumstances. For supporters of the Syrian government, the group, which has received funding from the U.S. Agency for International Development, has become the subject of lurid conspiracy theories, including accusations that it is part of a Western-orchestrated plot for regime change. Saleh is weary of these claims, saying that they are divorced from the reality of events in Syria. Civil Defense’s code of conduct includes a pledge of political neutrality, and the group rescues victims of bombings regardless of political persuasion.

“We are not asking for anything, except the implementation of the resolutions and agreements asking for an end to the indiscriminate bombings, besiegement, torture, and use of chemical weapons by the regime,” Saleh says. “We know that the resolutions to stop these things are not being implemented in Syria because there is no respect for them. There needs to be a political will to stop this catastrophe.”

The Syrian government has recently reiterated its intention to retake opposition-held areas of Aleppo by force. Too weak to accomplish this goal on its own, it has relied on Russian air support as well as ground forces supplied by regional allies. In the last few weeks, hundreds of civilians have reportedly been killed by strikes conducted by Russian and Syrian warplanes, which have been accused of indiscriminately targeting civilian areas of the city. An airstrike last week destroyed a humanitarian convoy organized by the Syrian Arab Red Crescent, killing at least 20 people in an attack that has been widely blamed on the Russian government. U.N. Secretary-General Ban Ki-moon has decried the attacks as likely war crimes, saying that the situation in Aleppo resembled a “slaughterhouse.” 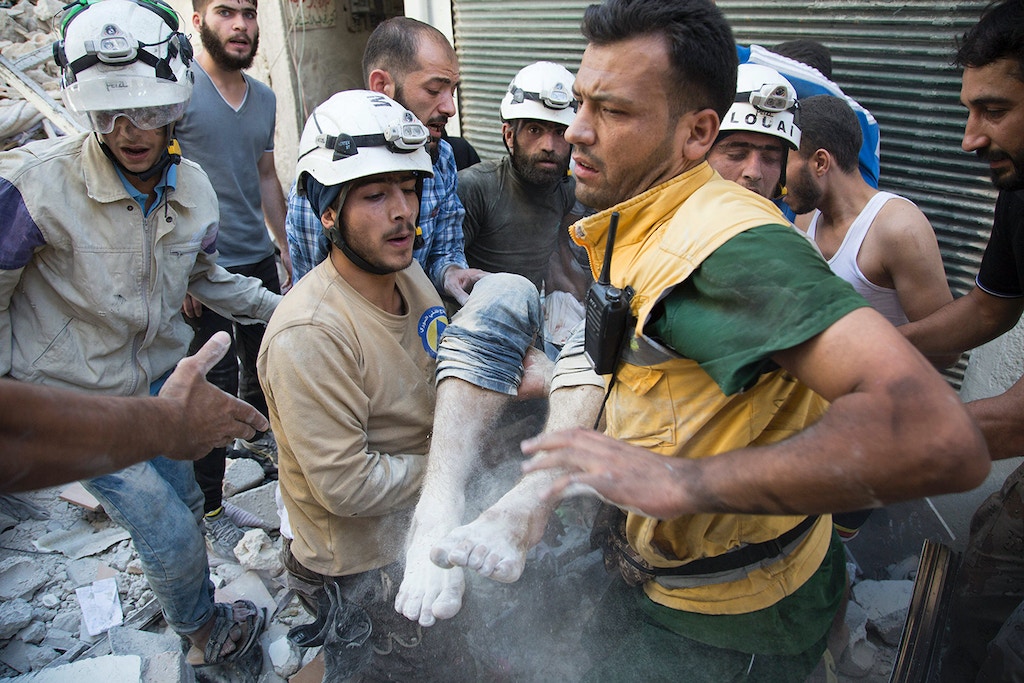 Syrian Civil Defense volunteers carry a body after digging it out from under the rubble of a building following a reported airstrike in the northern city of Aleppo on July 23, 2016.

Since a brief ceasefire in Aleppo collapsed last week, Russian officials have vowed to continue fighting until opposition-held areas of the city are recaptured by the Syrian government. The forthcoming battle could be one of the biggest of Syria’s long-running civil war. Before the war, Aleppo was Syria’s largest city, and as many as 300,000 civilians live in opposition-held areas there. The joint Russian-Syrian assault has led to fears of revenge killings and disappearances against the civilian population if government forces regain full control.

Saleh says that the work of the Civil Defense in Aleppo and elsewhere will continue despite the intensifying onslaught. Over 130 Civil Defense members have been killed in the line of duty since the organization was founded in 2013, including many who were killed in “double-tap” airstrikes intended to target rescuers. Though the civil war and his role in it have changed his life irrevocably, Saleh says that he and other Civil Defense members are driven to continue their work by religious conviction. The Civil Defense’s motto, “to save one life is to save all of humanity,” is adapted from a verse in the Quran.

“There are hundreds of thousands of people living in Aleppo under daily bombings,” Saleh says. “They do not have anyone else to call on for support, so we are willing to take any risk to provide it.”

Top photo: A member of the White Helmets carries a child to safety.