Mangal Prabhat Lodha, who licensed Trump’s name for the Trump Tower Mumbai, has a long history of wanting to criminalize religious conversion. 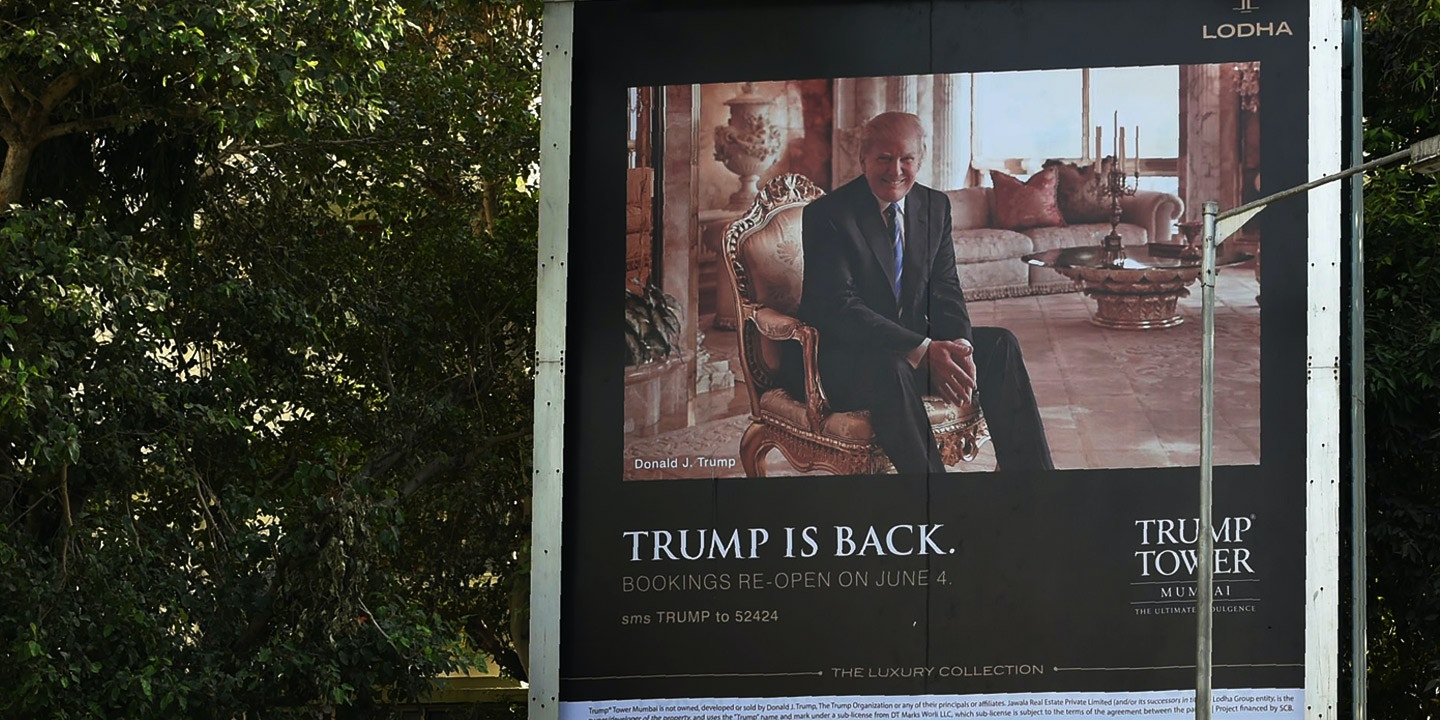 Trump has praised Prime Minister Narendra Modi, the nationalist BJP leader who gained international infamy for his role in stoking anti-Muslim riots in 2002 that reportedly killed nearly 2,000 people. The New York Times wrote that Hindu mobs skewered mothers “on swords as their children watched” while young women were raped in broad daylight, “then doused with kerosene and set on fire.”

And Shalabh “Shalli” Kumar, known as a close Modi ally and the BJP’s consigliere in U.S. politics, has emerged as a prominent backer of Trump’s candidacy. Kumar has organized multiple fundraising efforts within the Indian American community for Trump and donated $898,800 to Trump Victory, the joint fundraising committee formed to support his presidential campaign.

Trump is also in business with a prominent BJP politician, having signed a licensing deal in 2014 to construct the Trump Tower Mumbai with Mangal Prabhat Lodha, a real estate mogul and BJP state legislator. The 75-story building is now under construction, scheduled to be completed in 2018.

In many ways the partnership could not be more perfect. Like Trump, the BJP rose to power nationally two years ago by playing on sectarian anger against Muslims.

And Trump and Lodha have some things in common. Lodha is known for building golf courses and planning a gold façade at the building he is constructing. Lodha even sports a similar catchphrase, declaring on his political website his plans for “Making Mumbai Great Again.”

But Trump’s partnership with Lodha may present political complications. Lodha, like many BJP politicians, has not only antagonized Muslims, but has also repeatedly played to local anti-Christian hostility and sponsored legislation that Christian leaders say is designed to single them out for discrimination.

Neither Trump’s campaign nor Lodha’s firm responded to a request for comment.

In 2014, announcing the Trump Tower Mumbai deal, Trump praised his partner, calling the Mumbai-based firm “a truly fantastic team of professionals.” Lodha’s son, the managing director of the Lodha Group, told the New York Times that the branded approach to real estate has helped him sell condominiums; units in Trump Tower Mumbai have already sold for as much as $2 million.

Lodha came to political power in Mumbai in 1994 as Hindu activists protested over claims that Christian missionaries were entering slums and converting low-caste Hindus. In one incident, BJP activists attacked Christian converts over a dispute in Dharavi, a Mumbai slum. In another local incident, Hindus attacked a Catholic convent after accusing the school of converting a Hindu student to Christianity. Skirmishes between Christians and Muslims led to BJP activists taking to the streets to demand anti-conversion laws.

In response, Lodha has over the past two decades repeatedly pushed for anti-conversion legislation, called the Maharashtra Freedom of Religion Act, that would criminalize certain types of proselytizing.

Claiming that minority religious groups have preyed upon Hindus, Lodha’s bill deems the “threat of divine displeasure” or “social excommunication” as types of coercive proselytizing that could be punishable with a year or more of jail time. The legislation has also called for any individual seeking to change their religion to first gain approval from the District Collector, a state administrative office.

When Lodha first proposed his anti-conversion legislation, the Catholic community viewed it as a direct attack. “The Christian community is worried and concerned by the suggestion of jailing people for efforts at conversion,” the late Cardinal Simon Pimenta of Bombay wrote in 1997 in a widely circulated letter raising concerns with the legislation.

In 2013, Lodha proposed the bill again, for the fourth time, again enraging Catholics. The introduction of “such legislation will not only be an anti-minority act but will increase the persecution of the minorities,” Dolphy Dsouza, the former vice president of the All India Catholic Union and president of the Bombay Catholic Sabha, told the Hindustan Times. “Minorities such as Christians are already being harassed by authorities on false accusations of forceful conversions,” Dsouza added, “this will become another tool for harassment.”

In more recent years, Lodha has echoed claims by national BJP leaders and claimed that Muslims are waging a “Love Jihad,” marrying Hindu and Jain women so they can be converted and sold off to Islamic countries in the Middle East. “There should be one committee for each district that should work in cooperation with local police and people, and it may strictly check occurrences of ‘Love Jihad’ in their respective areas,” Lodha said.

Lodha has also enraged local Muslims by blocking cattle from being brought into Mumbai for Eid for slaughter and calling for a ban on loudspeakers over mosques. Three years ago, he led a group of 100 demonstrators who rallied at the local police station, calling for the confiscation of healthy cattle used for Eid sacrifice. Lodha has also proposed a complete ban on cattle slaughter in the entire state of Maharashtra, a state of 112 million people.

Top photo: A billboard for the upcoming luxury residential apartment complex Trump Tower Mumbai, which bears the name of billionaire real estate tycoon and presidential hopeful Donald Trump, is seen next to a busy road in Mumbai.