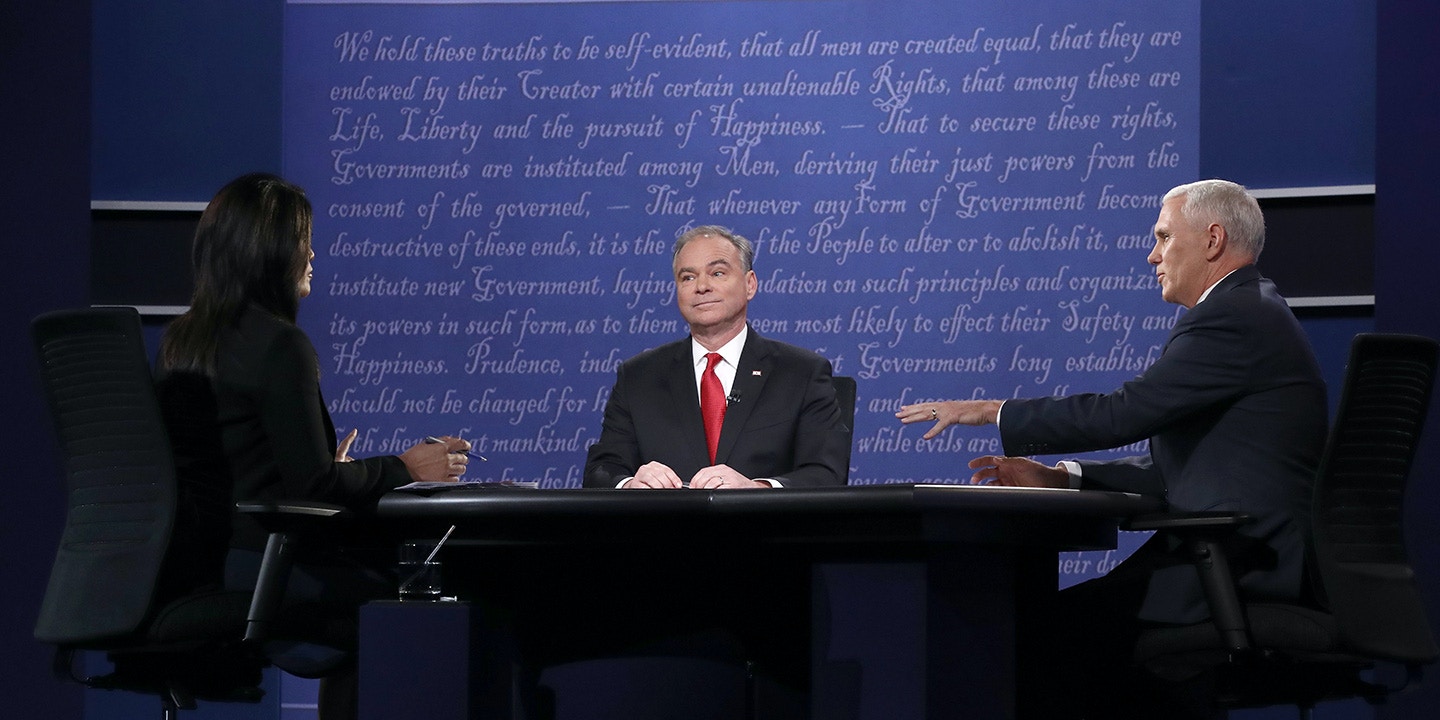 Tim Kaine and Mike Pence quarreled and quibbled over a number of issues Tuesday night, the central one being the condition of Donald Trump’s soul, but the biggest takeaway of the debate may be the things the two men agreed about — all of which are scary.

The Intercept’s staff liveblogged the debate, sympathizing with the routinely ignored moderator, while at the same time marveling over the irrelevance of some of her questions – fearmongering about the debt and Social Security? Seriously? With all the real things we should be worrying about?

Glenn Greenwald wrote about how “Mike Pence and Tim Kaine puffed up their chests and grappled with one another over who can be more antagonistic to Russia and who can scare Vladimir Putin more.” In Pence’s case, this happened in spite of the fact that Trump has called for a de-escalation of tensions with Russia, which has in turn led to Democrats’ “repeated accusations that he is some sort of agent of the Kremlin.”

While Trump has favored isolationist rhetoric, both of their running mates sounded distinctly neocon themes in the context of the Middle East. Lee Fang noted that “Mike Pence broke in a big way with the top of his ticket on foreign policy during the debate, declaring that his administration would be prepared to ‘strike military targets of the Assad regime.'” Zaid Jilani pointed out that Pence and Kaine “surprisingly agreed on establishing ‘safe zones’ in Syria for beleaguered civilians,” while both also “failed to mention the troop commitments such zones would take to defend.”

Kaine and Pence also agreed on some domestic issues. Alice Speri wrote about how they both enthusiastically support community policing because “It sounds great. It means basically nothing.”

We noted that, in a debate that barely focused on the two vice presidential candidates themselves at all, Kaine ended up somehow straddling some wide moral chasms: He repeatedly noted his missionary work in Honduras, while ducking Hillary Clinton’s warm relations with military coup leaders there and their U.S. enablers; he spoke about carrying out executions even though it violated his personal convictions.

And to kick the evening off, Jeremy Scahill exploded The Daily Beast’s cheap exercise in red-baiting with a post about Tim Kaine, John Negroponte and the Priest Who Was Thrown From a Helicopter.

Here are our posts from the evening:

The debate and the moderator