The excerpts, posted by WikiLeaks, appear in an internal campaign email that highlighted the most politically damaging quotes from each paid speech. 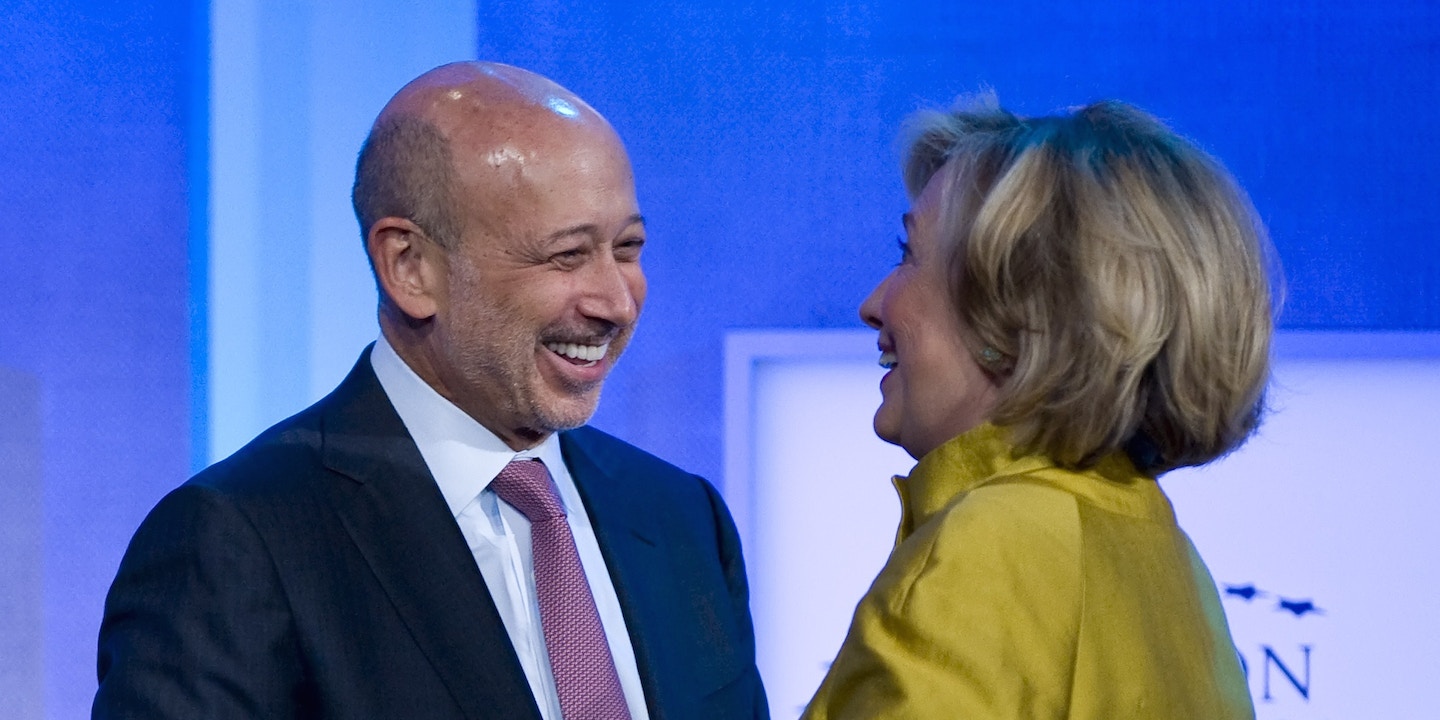 Excerpts of Hillary Clinton’s remarks during paid speeches to Goldman Sachs, Deutsche Bank, Morgan Stanley, and other groups were leaked online Friday afternoon by WikiLeaks. Clinton, who was paid upwards of $225,000 per speech, earned more than $22 million on the paid speaking circuit after resigning as secretary of state.

The excerpts are revealed in an email from Tony Carrk, the research director of the Clinton campaign, to John Podesta, the campaign chairman, and other top campaign officials. Carrk, who did not respond to a request for comment, highlighted in the memo the most politically damaging quotes from each paid speech, under headers including “CLINTON ADMITS SHE IS OUT OF TOUCH,” “CLINTON SAYS YOU NEED TO HAVE A PRIVATE AND PUBLIC POSITION ON POLICY,” and “CLINTON REMARKS ARE PRO KEYSTONE AND PRO TRADE.”

The wealth Clinton accumulated was a topic at the paid events.

Discussing middle class economic anxieties, Clinton told a crowd at a Goldman Sachs-sponsored speech that she is now “kind of far removed because the life I’ve lived and the economic, you know, fortunes that my husband and I now enjoy, but I haven’t forgotten it.”

But the discussions were also an opportunity for Clinton to speak candidly about policy, politics, and her approach to governing.

Touching on her view of developing financial regulations, Clinton declared to a crowd of Goldman Sachs bankers that in order to “figure out what works,” the “people that know the industry better than anybody are the people who work in the industry.”

At the Goldman Sachs Builders and Innovators Summit, Clinton responded to a question from chief executive Lloyd Blankfein, who quipped that you “go to Washington” to “make a small fortune.” Clinton agreed with the comment and complained about ethics rules that require officials to divest from certain assets before entering government. “There is such a bias against people who have led successful and/or complicated lives,” Clinton said.

At a speech for Morgan Stanley on April 18, 2013, Clinton praised the Simpson-Bowles deficit reduction plan — which would reduce corporate tax rates while raising the Social Security age. “But Simpson-Bowles — and I know you heard from Erskine earlier today — put forth the right framework. Namely, we have to restrain spending, we have to have adequate revenues, and we have to incentivize growth. It’s a three-part formula,” she said.

The Intercept was the first media outlet to ask Clinton directly if she would release the transcripts of her paid speeches to Goldman Sachs. When approached at an event in Manchester, New Hampshire, Clinton laughed off the question.

The issue was raised again during the Democratic primary debates and in other media events. In February of this year, the New York Times editorial board called for Clinton to release her speech transcripts, declaring that voters “have every right to know what Mrs. Clinton told these groups.”

According to reports, the campaign reviewed the speech transcripts but decided against releasing them out of fear that she would appear too friendly to banks and other donor interest groups.

But there are signs in the emails released by WikiLeaks that she also took a fairly progressive stance on certain topics, including health care reform.

During a talk in Grand Rapids, Michigan, in 2013, Clinton praised the single-payer model for health care reform. “If you look at the single-payer systems, like Scandinavia, Canada, and elsewhere, they can get costs down because, you know, although their care, according to statistics, overall is as good or better on primary care,” she said, adding that there were some drawbacks. “They do impose things like waiting times, you know.”

But during the campaign this year, she dismissed the idea, declaring that single payer will “never, ever” happen in the U.S. Audio obtained by The Intercept last week showed Clinton dismissing the concept of free health care during another private event with donors.