Trump’s insistence on the guilt of men who were exonerated is a form of denial that is prevalent in district attorneys’ offices around the country. 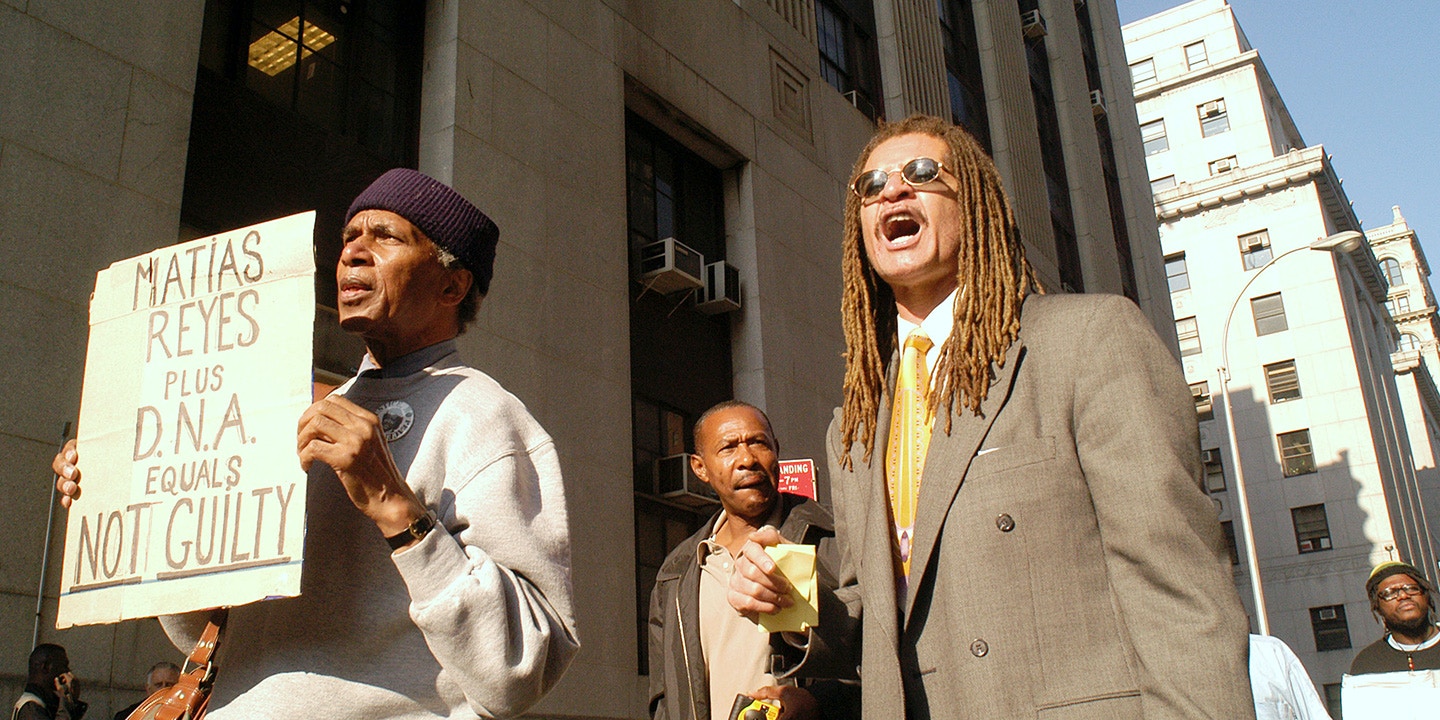 It took no time at all for anger over Donald Trump’s callous comments about the Central Park Five to be swept aside by a fresh new wave of revulsion. Hours after reasserting the guilt of five men wrongfully imprisoned for rape as teenagers  — whom Trump once declared should be executed  — the GOP nominee faced a firestorm over his own boasts of sexual violence. By the time the presidential debate aired on Sunday night, the controversy over the Central Park Five had been pushed out of view. This was disappointing to many racial justice activists, who had hoped Clinton would use the case to “go on the offensive,” as BuzzFeed reported, to push back against Trump’s racist “law and order” rhetoric and lay out her own plans for criminal justice reform.

But despite the burst of outrage, the ugly truth is that Trump’s attitude is all too common in district attorneys’ offices around the country. Not only have prosecutors defended the convictions of innocent people in the face of exonerating evidence, they will often block efforts to test for such evidence as DNA in the first place. Once a conviction is overturned, DAs often refuse to drop charges, dragging out a legal fight while dangling the specter of re-imprisonment over men and women who just want to move on with their lives. If a person is officially exonerated and seeks compensation, it is not uncommon for DAs to fight these efforts as well.

There are important exceptions. On Sunday, amid the chatter about the presidential debate, the shocking news that Brooklyn District Attorney Ken Thompson had died of cancer met with an outpouring of grief from exonerees and criminal justice activists over social media. Thompson, who was just 50 years old, oversaw 10 exonerations in his first year in office, an unthinkable record for an elected district attorney. He did not stop, doubling that number before he died.

Thompson transformed the lives of men like William Lopez, who spent 23 years in prison for a crime he did not commit. Lopez, whom I wrote about in 2014, had been released by a federal judge who called his case “rotten from day one.” Yet Charles Hynes, Thompson’s predecessor, refused to drop the charges, instead taking steps to re-convict him. Lopez lived in fear of returning to prison, unable to fully to adjust to his new life outside. His torment subsided thanks to Thompson, who finally dropped the charges and the appeal, calling it “contrary to the interest of justice.” Months later, Lopez died of an asthma attack. In a post on Facebook Sunday night, a friend of Lopez — a fellow exoneree who helped win his freedom — mourned Thompson, calling him “a champion for the wrongfully convicted.”

New York has come a long way since the exoneration of the Central Park Five. It was Hynes, ironically, who first established Brooklyn’s Conviction Integrity Unit — a model that has caught on in jurisdictions across the country. Yet even in places where such offices exist, they do not dissolve prosecutors’ resistance to the notion that the state can ever get it wrong. When I recently cited the handful of death row exonerations in California during an interview with an assistant district attorney in Los Angeles, she questioned whether any of these people were truly innocent, raising the possibility that “none” of them were.

Those who come to terms with wrongful convictions often do so too late. Last year, a former Louisiana prosecutor named Marty Stroud penned an anguished apology to Glenn Ford, an innocent man he sent to death row. The letter caused a stir — the National Registry of Exonerations called it “uniquely powerful and moving.” Yet Ford was denied compensation from the state and died of cancer months later.

Prosecutors are not solely to blame, of course. Governors also deny justice to the wrongfully convicted. Days before Trump’s unrepentant remarks about the Central Park Five, his running mate, Indiana Gov. Mike Pence, refused to grant an executive pardon to an Indiana man cleared by DNA evidence of participating in an armed robbery. After almost 10 years in prison, the man had waited three more years for a response to his clemency request. Through his lawyers, Pence said no.

Trump, of course, is a uniquely loathsome character who happens to be the GOP candidate for president, and whose words have dominated the news cycle for months. His insistence on the guilt of the Central Park Five is particularly galling in that it comes not from a DA defending his conviction, but from a private citizen who viciously weaponized his wealth against five innocent youths. “Maybe hate is what we need,” Trump told Larry King in 1989 when asked about his vigilante publicity blitz.

Yusef Salaam, one of the Central Park Five, has told the story of Trump’s vindictiveness for years. In 2005, when New York held hearings over the possible reinstatement of capital punishment, Salaam reminded lawmakers of Trump’s full-page BRING BACK THE DEATH PENALTY ad in the New York Times, noting that if the billionaire had gotten his way, Salaam would be dead. (I testified that day too, later getting to know Salaam through our mutual work with the Campaign to End the Death Penalty.) Angela Cuffie meets reporters on Dec. 19, 2002, at the Manhattan Supreme Court, where a judge overturned the conviction of her brother, Kevin Richardson, and four others jailed in the Central Park jogger case. Councilman Bill Perkins holds up an ad taken out by Donald Trump after the crime.

Trump is not the only one who loses no sleep over the Central Park Five. Those most responsible for their conviction have shown a similar lack of remorse. Former prosecutor Linda Fairstein, who oversaw the false confessions in the case, opposed the $40 million settlement paid out by the city in 2014, reiterating her belief in the five men’s guilt. In 2002, the year they were exonerated, Fairstein defended the teenagers’ interrogations to the New Yorker’s Jeffrey Toobin. “This was not an Alabama jail where two guys who have been partners for years put a guy in a back room and he doesn’t see the light of day for three days,” she said. In a boast that could have come from Trump himself, she called it “one of the most brilliant police investigations I’ve ever seen.” Today, Fairstein is a bestselling crime novelist — Hillary Clinton has listed her among her favorite authors.

Clinton, who was a New York senator when the Central Park Five were exonerated, has tried to move past her own rhetoric about “superpredators,” a term popularized by the case, to adopt the mantle of racial justice. On Friday, her campaign condemned Trump’s statement about the Central Park Five as “yet another racist lie.”

Clinton has shown some concern over wrongful convictions, having co-sponsored the Innocence Protection Act, providing for DNA testing and compensations in federal cases. But her sincerity — both on race and innocence — is undermined by her continuing support for the death penalty, as a death row exoneree from Ohio discovered firsthand at a town hall earlier this year. While in theory one can support executions while opposing sending innocent people to die, the exoneration of 156 death row prisoners to date shows how irreconcilable these positions are in real life. In a break from its own nominee, this year the DNC made abolishing the death penalty part of the Democratic platform.

But Clinton need not worry that such contradictions will obstruct her path to the White House. As George W. Bush showed, even the most cavalier approach to executions will not derail a presidential candidacy. As for Trump, his stance toward the Central Park Five is an expression of the racism and fearmongering that has animated his candidacy from the start. But it is also a form of denial that remains all too prevalent in the criminal justice system, even as Americans are more aware than ever of wrongful convictions.

As Trump showed in his defense of sexual assault, some people will never admit they are wrong. This, ultimately, is the reason so many remain in prison for crimes they did not commit.

But as the letter of apology from Marty Stroud demonstrated, changing your mind can be a powerful thing, precisely because it is so hard. Condemning Trump is easy. If Clinton truly wants to show that she cares about men like the Central Park Five, reconsidering the death penalty would be one good place to start.

Top photo: Woody Henderson, right, from the National Action Network, leads a demonstration outside the Manhattan Criminal Court in New York on Sept. 30, 2002, protesting the conviction of the Central Park Five.