Report: Every 25 Seconds, Cops Arrest Someone for Drug Possession

A new report from Human Rights Watch and the ACLU attempts to quantify the human cost of the war on drugs. 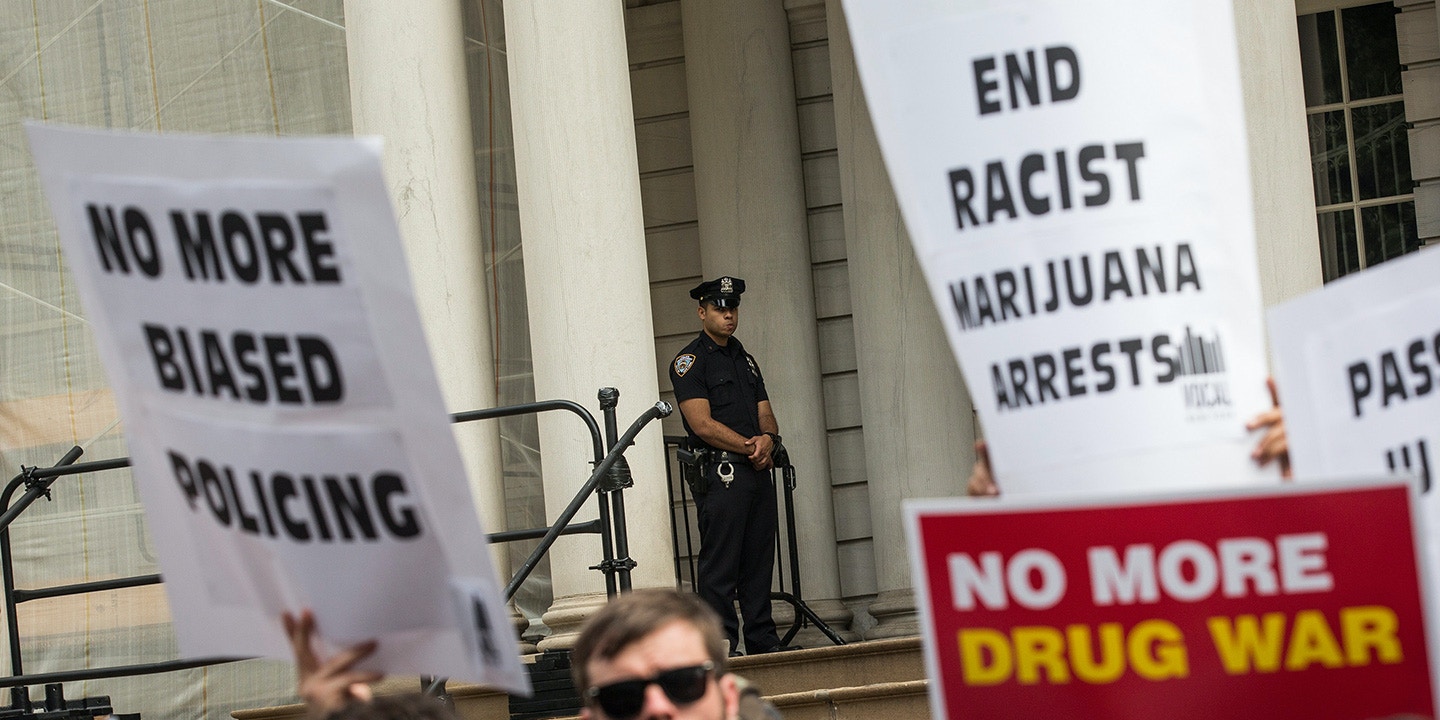 The war on drugs may have failed, but it certainly hasn’t ended: Every 25 seconds in the U.S., someone is arrested for drug possession.

Arrests for the possession and personal use of drugs are boosting the ranks of the incarcerated at astonishing rates — with 137,000 people behind bars for drugs on any given day, and 1.25 million every year. Possession of even tiny quantities of illicit drugs is criminalized in every state, a felony in most, and the No. 1 cause of all arrests nationwide. And while marijuana is now legal in a handful of states and decriminalized in others, in 2015 police nationwide made over 547,000 arrests for simple marijuana possession — more than for all categories of violent crime combined. These arrests are feeding people into a criminal justice system that’s rife with inefficiencies, abuse, and racism, and compounding drug users’ substance abuse with the lifelong impact of a criminal record.

The staggering numbers, detailed in a report released today by Human Rights Watch and the American Civil Liberties Union, shed new light on the colossal impact of the criminalization of drug use, as well as on the discriminatory impact of its enforcement. These laws have done nothing to stem the public health problem of drug addiction and in the process have destroyed countless lives and cost incalculable amounts of public resources in arrests, prosecution, and incarceration, the report charges.

Nearly half a century after it was first launched by President Nixon, the war on drugs has been widely recognized to have been a failure, yet little of substance has been done to reverse its course and the catastrophic damage it continues to inflict. In fact, while piecemeal approaches to fixing some of its symptoms — like sentencing reform, marijuana reclassification, and some discussion of police abuse — have by now been embraced within mainstream politics, the drug war’s founding policy, the criminalization of the personal use and possession of drugs, has rarely been questioned.

“This is a time when marijuana reform is sweeping the country, and yet we haven’t asked the question, Why do we still criminalize other illicit drugs?” Tess Borden, one of the report’s authors, told The Intercept. “It’s a time when we’re talking about race and policing and we show that drugs possession is the No. 1 cause of arrest, disproportionately impacting black communities, and yet we’re not talking about drug possession reform.”

In fact, as discussion of mass incarceration and criminal justice reform has gained ground, public conversations about drugs have also begun to change in tone, and there is growing recognition that drug use should be treated as the public health issue it is — and not a criminal justice one. Not incidentally, the recent opioid “epidemic,” which has mostly impacted white communities, has contributed significantly to the shift in discourse — further testimony, to some, of how the criminalization of drugs was always tied to race.

But so far, legislation has not followed.

Instead, continued criminalization has curbed neither substance abuse nor drug sales. Drug use rates remain mostly unchanged from Nixon’s time, and while some politicians insist the laws are there to deter trafficking, users are arrested four times as often as sellers. Criminalization drives them underground, making them more prone to unsafe practices and less likely to access the little treatment that is available to them. And when they do get arrested, they are funneled into a criminal justice system that’s defined by dysfunction and discrimination at every step.

“There are injustices and corresponding harms at every stage of the criminal process,” the report notes, before detailing how drug arrests feed people en masse into widely problematic structures, from police to jails and courts.

Criminalizing drug use “simply has not worked,” the report’s authors charge — calling on state and federal legislators to rewrite the law to fully decriminalize personal drug use, and, until that happens, encouraging all levels of enforcement to stop enforcing it or try to minimize its impact. They call on prosecutors to decline to go after drug possession cases, judges to avoid sentencing to incarceration, and police to decline arresting people for small drug possession and to stop measuring department performance based on those arrest numbers.

In fact, drug arrests begin with police searches and seizures and shape the interactions of entire communities with law enforcement. They send thousands of people to jail — 89,000 of whom languish in jails every day, on average — where they are separated from family and kept away from jobs, trapped by unaffordable bail, and collecting debt at every step of the process. The threat of inflated prison sentences leads 99 percent of those charged with drug possession in the 75 largest U.S. counties to bow to guilty pleas. Convictions, in turn, ensure that 48,000 drug offenders are in state prisons every day, on average, at a huge public cost, in addition to the personal one. Whether sentenced to prison time or not, once convicted of a felony a drug offender is branded for life, in many states locked out of jobs, student loans, benefits, and even the right to vote. Where probation is afforded, conditions are often so unreasonable that lawyers sometimes counsel clients to opt for a prison sentence instead, the report found.

Enforcement varies widely across the country, sometimes even within the same state, and as police and prosecutors are afforded a level of discretion when pursuing people over drug possession, the results are unsurprisingly racist:

In the 196-page report, which is based on hundreds of interviews with drug users in Louisiana, Texas, Florida, and New York, including many who were incarcerated, as well as family members, attorneys, government officials, and service providers, researchers paint a grim picture of the devastating toll of criminalization, while also highlighting the absurdities of excessive enforcement that’s “neither necessary nor proportionate,” the report notes.

There’s the 49-year-old black man from New Orleans who is serving a five-year sentence for possessing less than 0.2 grams of crack — after pleading guilty to avoid a possible 20-year sentence. There’s the young mother who spent three months in jail in Houston, away from her three small children, including a newborn, before pleading guilty and taking a seven-month prison sentence for “residue” amounts of heroin and cocaine — her first felony. She lost her student financial aid and the food stamps she relied on to feed her children as a result of the conviction. There’s the man serving 15 years for possession of an amount of methamphetamines so small that it couldn’t be measured in a lab and was simply categorized as “trace.” There’s the Florida woman who was convicted of possession of Xanax and methamphetamine when she was 18 and because of the state’s lifetime disenfranchisement provisions, will never be able to vote.

Yet in an election year in which issues that are directly related to the war on drugs have played center stage, specifics on how to put an end to it have been lacking.

“Both candidates have talked about policing and race and criminal justice at some level, but we haven’t seen anyone take on policy reform,” said Borden, noting however that while there’s much the federal government, and especially Congress and the Department of Justice, could do to push change, most legislative change should happen at the state level, where most of the enforcement is also happening.

“It takes some time to shift public perception and legislator perception, but there’s mounting appetite for this and a growing recognition that we’ve been stuck on one gear for four decades,“ she added. “It’s not getting us up the hill; we just need to shift gears.”