One of Black Mirror’s great accomplishments is that it can make you feel rotten dread about the most mundane parts of your life. Starting this weekend Netflix will begin showing six more episodes of Black Mirror, the brilliant, deeply creepy tech-dystopia series, with which to torment yourself. It remains sinister and brilliant, but for the first time, the Rod Serling-meets-Evgeny Morozov show’s choice of subject matter hits so close to home that you may have a hard time watching it.

This is not a bad thing. One of Black Mirror’s great accomplishments is that it can make you feel rotten dread about where the most mundane parts of your life could take you in 10 years — your smartphone, your Facebook account, your TV. All could lead to a collective social nightmare. And Black Mirror is right, they probably will! They already are. But rather than stage these questions in a sci-fi reductio ad absurdum as the show has done in the past (What if Facebook likes were the world’s only currency? What if your ex could be reanimated as a robot and lived in the attic?), this season’s strongest moments are firmly 2016. 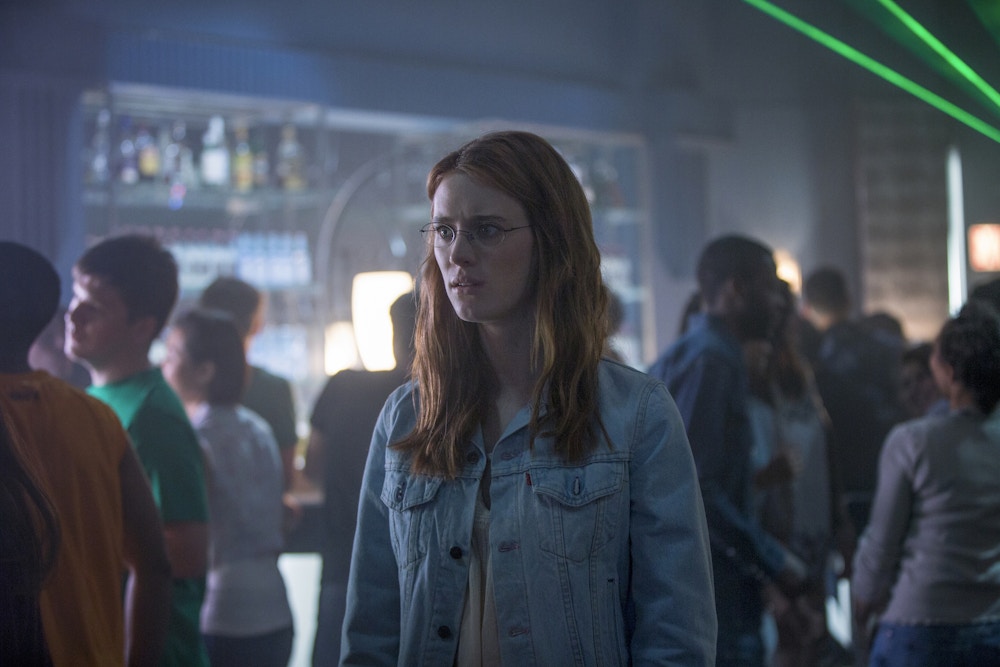 Season three’s most upsetting mini-movie is “Hated in the Nation,” which, if you ignore the presence of robot bees, could take place today, opening with an online journalist caught in a Twitter hell-storm following a controversial article. Only minutes into the episode, after an onslaught of Twitter harassment, the writer ends up dying in a most gruesome fashion. When the show’s detective protagonist arrives at the scene of the crime, even she rolls her eyes about how the deceased only created “clickbait,” a scene plucked straight from every writer’s 4 a.m. anxiety nightmare (or mine, at least). The investigation of this death launches the rest of the 90-minute (!) episode, which includes a zeitgeist Bingo card’s worth of keywords: drones, facial recognition, hashtags, online shaming, GCHQ, backdoors, end-to-end encryption, 3D printing, hackers, and even a driverless car. Somehow, this manages not to feel ham-handed, but it does feel brutal.

Watching 90 minutes of death threats to journalists; manic, bloodthirsty Twitter mobs jumping from target to target; and complex anti-privacy regimes isn’t exactly a science fiction experience anymore. Not even the robot bees could cause me to suspend my disbelief — too much of what’s on the screen in “Hated in the Nation” is happening at every turn of this election to feel as if Black Mirror is taking you to a strange parallel universe. But even at its most mundane, the show will fill your stomach with concrete and angst, your newsfeed will appear as a foe, and you’ll want to draw the blinds. It’s thrilling if a bit nauseating — watching the episode “Shut Up and Dance” on my laptop, wherein a teenage boy’s own laptop, filled with malware, records his intimate moments for an unknown tormentor, made me want to close my computer and hide under the bed. You might feel like hiding as well — but you probably won’t, because it’s dusty down there on the floor, and Black Mirror is simply too terrific.

This season isn’t all obvious, timely doom and gloom. Some episodes still retain that sense of What the hell am I watching? rather than Twitter has been weaponized and will kill you. The episode “San Junipero,” following two women who meet in an otherworldly resort town that feels plucked from some dimension outside time and space, is dreamlike, gorgeous, and very subtle. Unlike “Hated in the Nation,” which reveals itself to you nearly from the get-go, “San Junipero” unfolds as a mystery up until the very end — and unlike much of Black Mirror’s wrenching, whip-smart third season, you may even want to sit through it again.