At Hillary Clinton’s Favorite Think Tank, a Doubling Down on Anti-Iran, Pro-Saudi Policy

Clinton foreign policy advisor Mike Morell and others on a Center for American Progress panel advocated on behalf of the Gulf states in their ongoing, Middle-East wide power struggle with Iran. 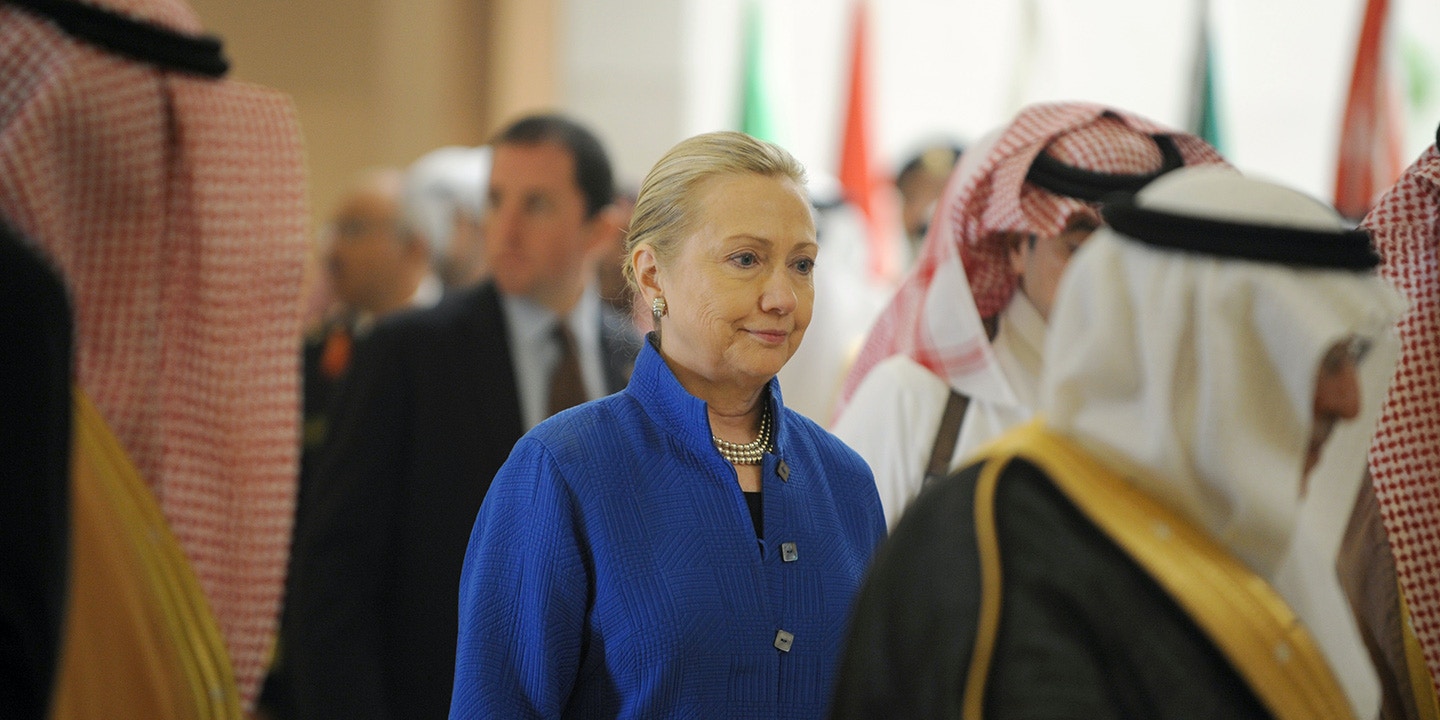 The Center for American Progress hosted a sort of preview of Hillary Clinton’s Middle East policy on Tuesday, with a Clinton adviser and a Gulf state diplomat agreeing that the next president should double down on support for the Gulf states, including Saudi Arabia, while ramping up action against Iran.

It is a signal that a future Clinton administration would overwhelmingly favor the Gulf states in their ongoing, Middle East-wide power struggle with Iran, implicitly rebuking President Obama, who has come under fire from Gulf states for mild criticism of their foreign policy and his nuclear deal with Iran.

The founder of the Center for American Progress, John Podesta, is the campaign chair for Clinton’s presidential bid; many of the candidate’s closest advisors are alumni of CAP and it is widely viewed as a launching pad for policy staff for Democratic presidents. The center is currently helmed by Clinton transition co-chair Neera Tanden.

Panelists at the event, titled “Strengthening U.S. Partnerships in the Middle East,” argued for what is essentially a supercharged anti-Iran, pro-Saudi posture, with little disagreement from CAP moderator Brian Katulis.

Former acting CIA Director and Clinton foreign policy advisor Mike Morell called for escalation of sanctions “that bite” on Iran in response to their “malign behavior in the region.” And in what would be a dramatic escalation of U.S. power in the region, he called for intercepting Iranian vessels traveling to Yemen to supply weapons to Houthi rebels.

“I know there’s issues of international law here,” Morell said. “Ships leave Iran on a regular basis carrying arms to the Houthis in Yemen. … I would have no problem, from a policy perspective, of having U.S. Navy board those ships and if there’s weapons on them for the Houthis, turn those ships around and send those ships back to Iran. I think that’s the kind of action, tough action that would get the attention of the Iranians and will get the attention of our friends in the region to say the Americans are now serious about helping us deal with this problem.”

The United States objected to the Houthi capture of Yemen’s governing institutions in 2014, and considers the leader they ousted, Abdo Rabbo Mansour Hadi, to be the legitimate leader of the country. And when Gulf countries started bombing Yemen in the Spring of 2015 in defense of Hadi’s exiled government, the National Security Council said it “strongly condemns ongoing military actions taken by the Houthis against the elected government of Yemen.”

But there is no state of war between the U.S. and the Houthis and the State Department does not consider the group to be terrorists.

Furthermore, the Iranian relationship to the Houthis is tenuous and has grown primarily due to the Saudi-led intervention. And the Houthis have also been known to be fierce opponents of al Qaeda in the Arabian Peninsula, which our government does designate as a terrorist group and a threat to the United States.

United Arab Emirates Ambassador to the U.S. Yousef al-Otaiba began his remarks by praising a CAP report released last week that advocates for continued cooperation with Gulf states like Saudi Arabia and the UAE while urging consideration of use of force against Syria’s Iran-allied government.

“Thank you for the report on the Middle East, which I happen to completely agree with,” Otaiba said.

For Otaiba, the main problem with current U.S. policy is that it isn’t friendly enough to the Gulf’s Sunni autocracies. “At the risk of trying to solve every policy first, I think for the next administration what I’d like to see is to rebuild those relationships, to rebuild the trust.”

Part of that distrust, in the ambassador’s view, was built by Obama’s opposition to Egypt’s dictator Hosni Mubarak during the Arab Spring and his strategic silence during the Green Revolution in Iran. “If I was a Martian watching the events of the Middle East over the last few years,” he joked, “and I saw the U.S. reaction to the events in Iran and then shortly after I watched the U.S. reaction to the events in Egypt, I would be a very confused Martian. I would think it was the other way around. I would think Iran is the U.S. ally, but Egypt was the adversary.”

But U.S. policy towards the military regime in Egypt has hardly been uncharitable, and the government of Iran would be surprised to hear any suggestion that the U.S. is siding with it. In reality, the U.S. gave $6.5 billion in military aid to Egypt between 2011 and 2015 and has maintained a stringent set of economic sanctions targeting Iran.

Otaiba named a group of “core allies” — Saudi Arabia, Egypt, UAE, and Jordan — that he’d like to see the U.S. reaffirm its commitment to. “I think the first order for the new administration is try to get that band back together, operating on the same wavelength.”

That wavelength is an increasingly controversial one, however, as militant movements inspired by Saudi-aligned ideology have spread throughout the region. The hacked Clinton campaign emails released by Wikileaks, for example, show that Hillary Clinton privately is troubled by Gulf state foreign policy. In a 2014 email to Podesta, she wrote of a need “to use our diplomatic and more traditional intelligence assets to bring pressure on the governments of Qatar and Saudi Arabia, which are providing clandestine financial and logistic support to ISIL and other radical Sunni groups in the region.”

But the others panelists did not disagree with the UAE ambassador. Morell, in particular, chose to frame Gulf behavior in the region as simply a defense against an imperial Iran.

But there is in fact an ongoing struggle for influence between Iran and the Gulf states, as reflected in the proxy struggles around the region. Most notably, the region’s most violent conflict is taking place in Syria, where an Iran-backed government is doing battle with rebels that Gulf states have flooded with arms and other resources.

Former Vice Chairman of the Joint Chiefs of Staff James Winnefeld, Jr., another panelist, concurred with Morell. He essentially advised that the United States adopt the Saudi view of Yemen and Iran.

He then turned to the issue of international law and Morell’s suggestion. “A very very strict interpretation of international law would say you can’t interdict an Iranian ship at the high seas,” he noted. But he insisted that the United States could interdict their ships if it was a matter of self defense. “My opinion and I think Michael would agree with me is that we could probably be a little bit more liberal in our interpretation of what collective self defense means when Iran is shipping arms to the Houthis to operate in Yemen which threatens the whole region.”

Otaiba took the opportunity to defend his own country’s support for the Saudi intervention in Yemen, pointing to what he claimed was growing Iranian influence through the Houthis. “We were not going to allow for this to happen on the border of a country that produced 10 million barrels [of oil] a day, and is home to Mecca and Medina,” he said.

No one at the event offered criticism of Otaiba’s defense of the war or the more than $20 billion of U.S. arms sales to the Saudi Arabia over the past 18 months. The thousands of Yemenis who have been killed by the Gulf coalition’s military intervention went unmentioned. The Gulf states’ role in fostering extremism in Syria and elsewhere was also not extensively discussed. And the wisdom of adopting a more hostile posture towards Iran was never questioned.

Katulis did not respond to a request for comment.

(Full disclosure: the author of this post worked at the Center for American progress from 2009 to 2012.)