“We came to this country as pioneers,” said one of the young men. “White people settled this country. Mexicans just came here.” 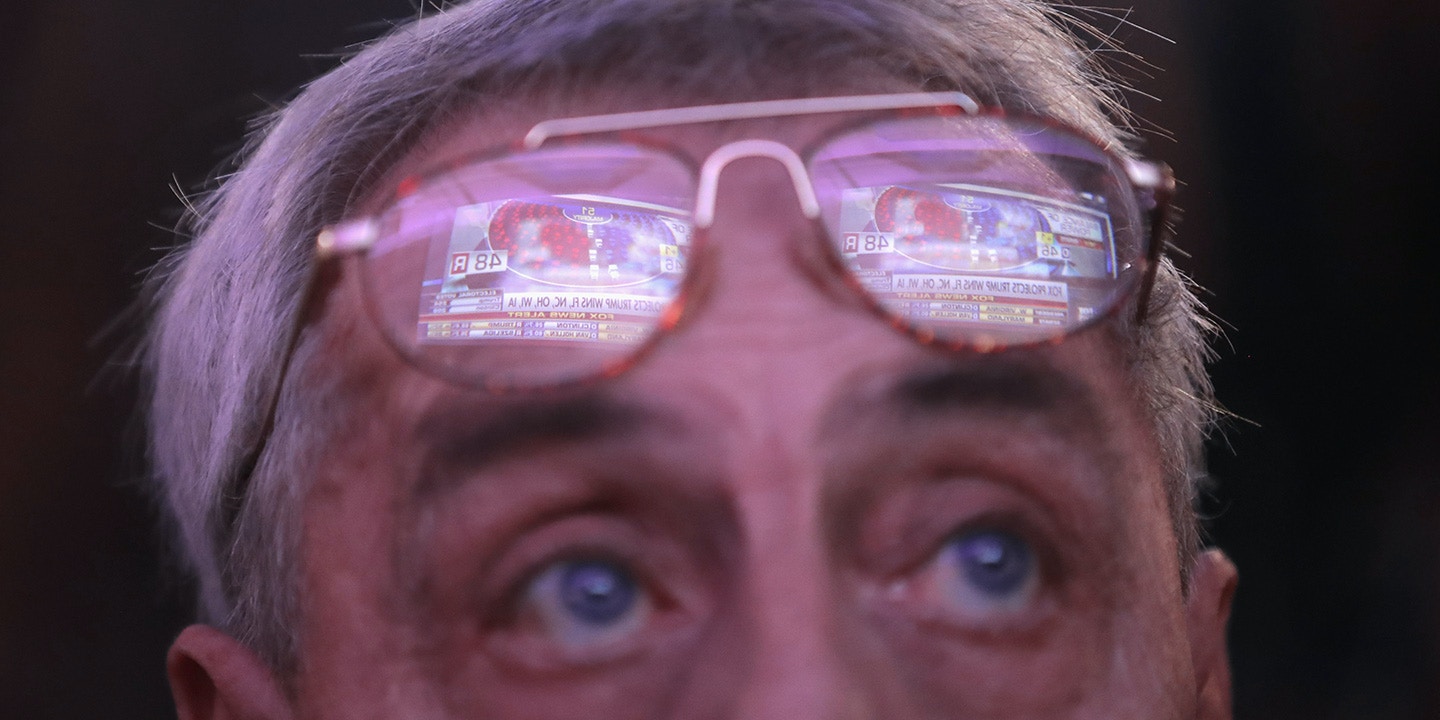 Last night they assembled in the grand lobby of the Trump International Hotel Washington, formerly the Old Post Office. The transition team was said to be scattered between the rooftop of the W and the Willard. Here, at the leader’s hotel, was the fandom, the pledges lining up for rush: frowning older men in jeans and blazers, their platinum wives in spike heels and cheekbones. The muscled alpha warrior types in cargo pants and Under Armour. Most of the noise came from squads of straw-haired younger men in their red ties and red hats. Some of the hats had dark scribbling on the edge of the bill — the mark of the leader’s own hand. Early in the night, the young men chanted and drank Budweiser. Later they switched to $64 bottles of leader-branded champagne and shook one another’s shoulders in ecstatic disbelief.

“We’re the fucking establishment now. You and I. We’re not …” the young red hat, encircled by his squad, pantomimed the old establishment with a swaying, limp-wristed dance. “We won. Fuck them.”

It was still early. Virginia had see-sawed back to Hillary Clinton’s column. She was ahead in Pennsylvania. Michigan was not looking so good. But there were still a lot of ballots to be counted. 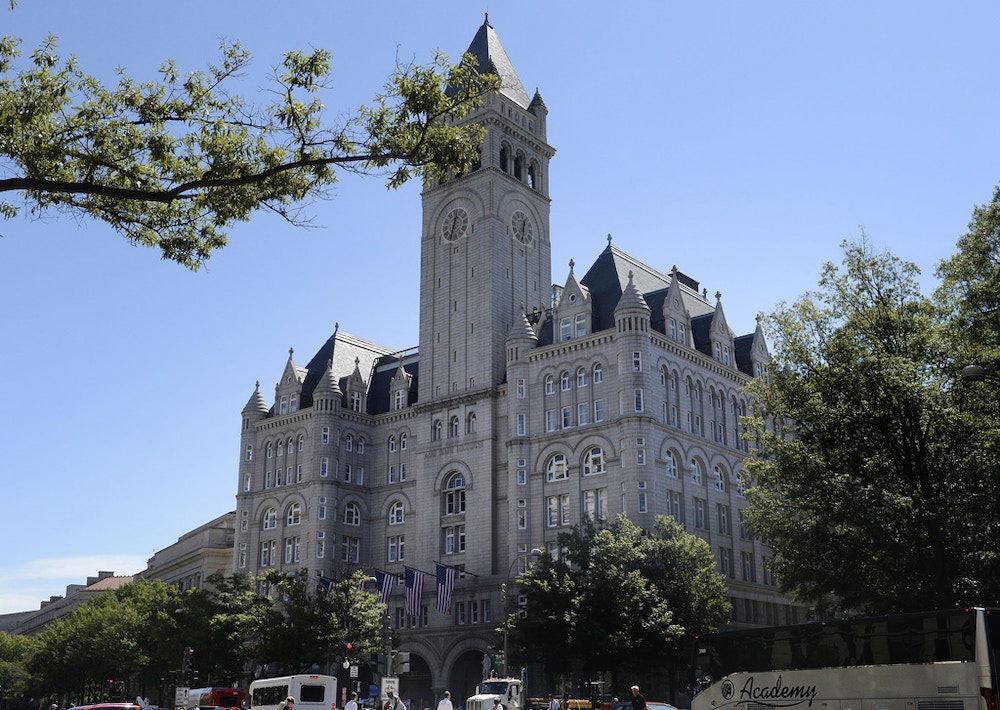 A view outside the newly renovated Trump International Hotel on Sept. 12, 2016, in Washington, D.C.

In front of the bar, Greg Park and Peter Sim toasted their own success, now mixed with the shared success of the leader. Park and Sim were neither rural nor uneducated nor white. They were two successful guys, friends from college, who had booked one night in their candidate’s hotel. Park, a physician, lives in Massachusetts. “Proud Member of the Deplorables,” read his T-shirt. Sim has a small dental supply business in Cincinnati, Ohio. His T-shirt had Trump rendered in Lego blocks. He was unhappy about his $1,078 Obamacare premium. It was his clients, the dentists, who had talked him around to supporting Trump, he told me.

“Trump’s a businessman,” Sim said. “So am I. If he puts out a product that people want, he gets money. If he doesn’t, he has to borrow. If no one will lend to him, he goes bankrupt.”

“My parents came here 30-plus years ago,” Park said. “This was after Lyndon Johnson’s Great Society program, but still, there weren’t a lot of things given to them. It was succeed or fail. I don’t have a problem with being humane. But eventually the burden is going to be overwhelming.”

Our conversation was erupted by a wave of red-hatted chanting, USA! USA! USA! Michigan seemed to be slipping away from Clinton’s grasp. The man standing next to us pointed to the televisions. “All these guys can’t believe what is happening right now,” he said. “This is us, the USA, saying fuck you. We’re back.”

Sim and Park knocked together their tumblers, which contained 15-year-old scotch whiskey. “I don’t think he’s going to build the wall,” Sim said. “Yeah, I think he’s going to build it. But I don’t think Mexico is going to pay for it. A lot of the wall is already there. I saw a video of this Mexican guy climb the wall, hand the package of dope over, and climb back. They couldn’t do anything.”

There were a few curiosity-seekers in attendance, like Todd Georgelas from Arlington, Virginia. “I’m in shellshock,” he said. “You can get used to anything. But this will take some getting used to.”

The bar, once three-deep, was now eight-deep. A solitary man sat before a glass of wine, continuously reloading the Drudge Report on his iPad. The room felt somewhere between safe and peaceful, a thicket of shoulders and elbows if one tried to go anywhere. Upstairs, at the BLT Prime restaurant, a young woman in a cocktail dress slapped one of her companions across the face, drawing blood. He was behaving like a douchebag, she explained. Downstairs, another young woman picked up a glass of water and doused a circle of people on a nearby couch. Management dealt with these cases professionally, as did waitstaff who were asked by their customers to participate in their joy at this historic moment. “Yes, I would agree that these are interesting times,” said a white-gloved waiter to a middle-aged man in blue jeans who was drinking a Budweiser.

Kimberly Kennedy, an African-American grandmother with 11 grandchildren, who moved to D.C. from Chicago, voted for Trump, she said, “because we needed a change.” “From the beginning, I said he would win,” she continued. Like Park and Sim (who around this time had switched to cognac), she felt as though Trump had made her a participant in his unlikely success. “I just see a better future, more opportunities, with Trump. The American dream. I think people should be able to reach the American dream.” She noted that she was against legal abortion. She voted for Bill Clinton twice, and Barack Obama once, she said.

I kept following the loose posse of red hats. They seemed to be the life of the party. There was talk of marching over to the White House later on, and I was interested in the possibility of full immersion. Drunk as they were, they exercised universal caution and discipline about contact with the media.

A sommelier walked through the room ringing a special “last call” bell. Shortly after two, the lights came on. Call it now! Call it now! This was the new red-hat chant. Sriraman Damodaran stood next to the co-founder of his hedge fund and told me how he had foreseen this result long ago.

“My analysis was very simple,” he said. “I did not think Hillary had the pull to inspire people to come out and vote. From looking at the midterms and the primaries, I knew there would be a large turnout on Election Day for the Republicans. Those are the establishment Republicans. Then there is Trump’s own base, which he brings out. On the Democrats side, it was clear that Hillary wasn’t going to bring out the young people and the minorities like Obama was.” So he bet against the peso and shorted Amazon. He was already a winner. By the morning, his winnings would be quantified.

Damodaran was an immigrant, he said. His parents were still in India. “I don’t have any skin in the game about Democrats versus Republicans,” he said. “I did listen to Trump, and I saw the media take things that he said out of context. Ultimately, I got picture that I was comfortable with.”

The sensible people were loading up Uber on their phones. The red-hats decided it was time for their White House march. On the way, they took some selfies in front of the hotel with a cardboard cut-out of the new leader. “Respect your president!” one Uber-bound reveler shouted over his shoulder, a parting shot.

It was around 3 in the morning. Trump was probably giving his speech, but no one seemed to be aware of it. As we passed Treasury, a tall blond woman in an orange dress began shouting about immigrants, who she called “muchachos,” then “bitchachos.” “Get the fuck out of our country, you illegal bitchachos!” she shouted, at no one in particular.

A speakers’ corner had formed beneath the statue of Andrew Jackson on the north side of the White House — some red hats, some nerdier-looking alt-right types in trench coats and backpacks, some representatives from a foreign government who had been monitoring the election in Virginia, some interested people who had just happened by. I met Eduardo Perea-Hernandez, a slender and sober young man in a sweater. He had been taking in the election from the Mall for several hours. He had been educated at a Jesuit high school and now studied political science at a university in Washington. His parents were born in Mexico. He had tears in his eyes.

“They’re entitled to their own opinion,” he said, pointing to the leader’s hotel crowd. “But it’s my family. I was born here. So I’m straight. But my mom’s is not. My dad’s is not. You know? But they’re entitled to their opinion. Their closed-mindedness. My life has been shaped by immigration reform. My mom’s and my dad’s have been affected by that. But at the end of the day, I’m a U.S. citizen. I have just as much a right as these motherfuckers to protest as anybody else. I’m sorry about this gibberish coming out of my mouth, but it’s just crazy. I didn’t think this country could be divided so much. But as you can see right now, we are. We’re going to protest the right way. Because we’re entitled to that. These guys are speaking their freedom right now. And so will we, later on. If they have a different opinion than me, that’s cool. So long as they’re willing to have a conversation.”

Behind him, a dozen or so young white men, one holding an American flag, were talking about the game plan for the first hundred days. Perea-Hernandez inserted himself into their midst and started talking. He quickly learned that this group was in favor of ending birthright citizenship. “We came to this country as pioneers,” said one of the young men. “White people settled this country. Mexicans just came here.”

“Don’t claim that you’re part of Spanish culture,” said another.

“I’m not claiming that,” Perea-Hernandez said. “I’m just saying I’m part of an indigenous culture that got fucked.”

“History is about power,” the Trump supporter said. “We won.”

Top photo: A supporter of Republican president-elect Donald Trump during the election night event at the New York Hilton Midtown on Nov. 8, 2016, in New York.