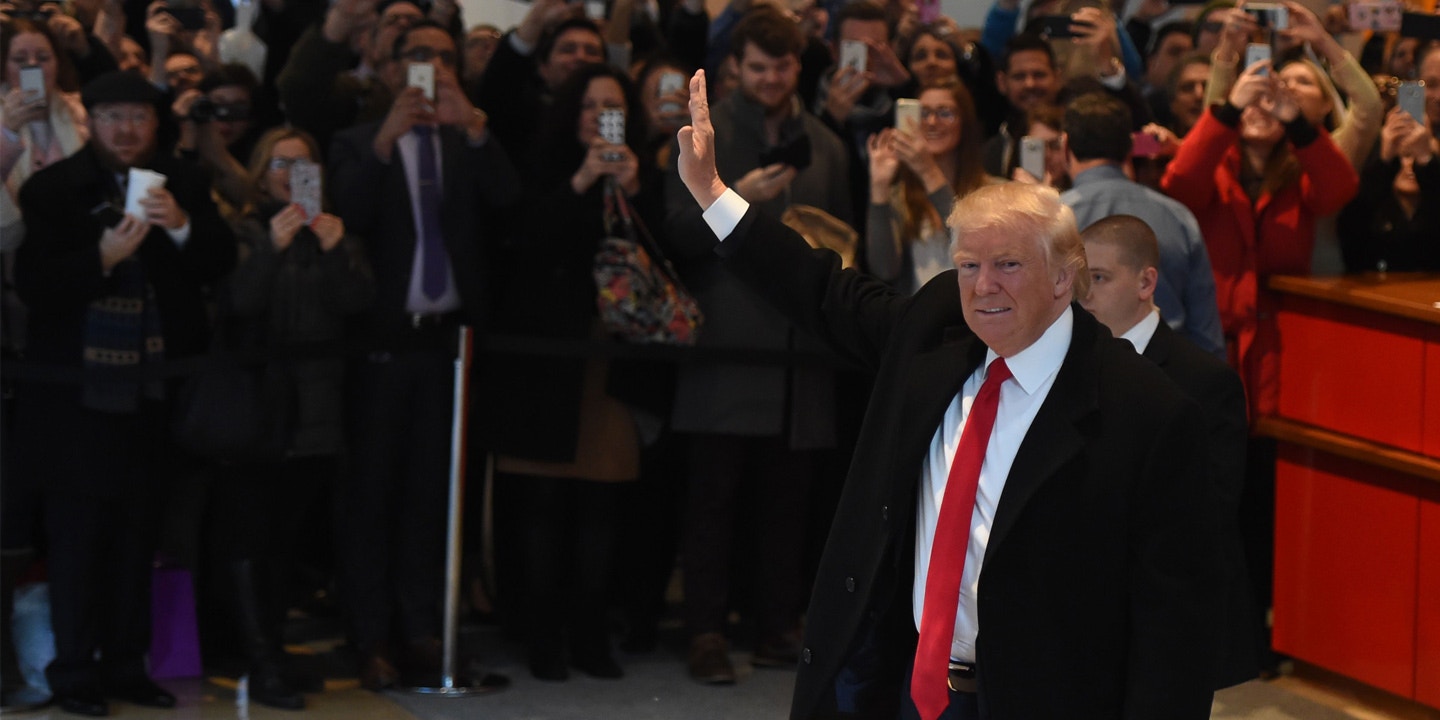 As Donald Trump’s presidential campaign shifted from hilarious to terrifying, the New York Times newsroom produced a gusher of tremendous journalism, digging deep into critical subjects, explicating Trump’s lies and frauds, and providing those Americans who wanted it with the information they desperately needed.

Then Trump was elected. And now that he’s not just potentially powerful but genuinely powerful, the paper appears to be returning to its traditional role of feebly accommodating presidents rather than actually holding them accountable.

According to the Times itself, Reince Priebus, Donald Trump’s chief-of-staff-to-be, tried to trick Trump into canceling his interview with the Times on Tuesday because Priebus was worried Trump “could face questions he might not be prepared to answer.”

All of the Times’ top editors and reporters together, given a golden opportunity, found themselves unable to perform basic journalism. They let Trump skate on literally everything.

Even worse, other outlets then took the useless Times interview and misreported what Trump said.

Here are all the gruesome ways it went wrong:

Dean Baquet, editor of the Times, went first with this slurry of words:

BAQUET: You energized a lot of people in the country who really wanted change in Washington. But along with that — and this is going to create a tricky thing for you — you also energized presumably a smaller number of people who were evidenced at the alt-right convention in Washington this weekend. Who have a very …

TRUMP: I just saw that today.

BAQUET: So, I’d love to hear you talk about how you’re going to manage that group of people who actually may not be the larger group but who have an expectation for you and are angry about the country and its — along racial lines. My first question is, do you feel like you said things that energized them in particular, and how are you going to manage that?

Trump predictably responded that “I disavow the group” and then blathered on about how he has no idea why neo-Nazis love him and whatever’s going on it isn’t his fault.

Here’s a better way Baquet could have asked a question on this subject:

While running for president in 2008, Barack Obama delivered a nationally-televised speech disavowing Jeremiah Wright, pastor of his church, and explaining his perspective on the history of race in the United States. Will you give a similar speech disavowing the bigots and white supremacists who’ve enthusiastically endorsed you?

Many (though not all) of the questions from other editors and reporters were just as bad. Thomas Friedman’s meandering, pillow-soft inquiries, complete with his transparent attempts to butter Trump up, have to be read to be believed. Friedman instinctively ingratiates himself with the powerful like a beta chimp.

Trump has proven that he never answers questions, he just opens his mouth and a random assortment of sounds comes out for several mind-numbing minutes. Yet for the most part the Times’s staff was totally unprepared for this.

For instance, when White House correspondent Julie Davis asked Trump about Steve Bannon, the former Breitbart News chairman who will be his chief White House strategist, Trump said, “If I thought he was a racist, or alt-right, or any of the things that we can, you know, the terms we can use, I wouldn’t even think about hiring him.”

Davis did not then point out that just four months ago Bannon said that under his leadership Breitbart had become “the platform for the alt-right.”

Similarly, no one asked Trump why, if his “company is so unimportant to me relative to what I’m doing,” he won’t put his assets into a blind trust, or why Trump apparently believes it’s impossible for him to sell his real estate holdings.

Times reporter Michael Barbaro, to his credit, did try to press Trump on whatever arrangements he’s going to make with his shoddy empire, though with no success. Barbaro was finally reduced to asking, “Can you promise us when you decide exactly what that is, you’ll come tell the New York Times about it?”

Here are ways that several subjects should have been broached with Trump but were not:

“Will you veto any bill from congressional Republicans that cuts Social Security and Medicare benefits or privatizes the programs?”

“Your tax plan would raise taxes on half of single parents, while allowing you to pass your fortune onto your children largely or completely untaxed. Why is this fair?”

“You said during the debates that ‘of course’ you’ve used loopholes that have allowed real estate developers like yourself to sometimes avoid paying taxes altogether. How will you close these loopholes?”

“Michael Flynn, your pick for national security adviser, has said that ‘fear of Muslims is rational,’ and endorsed a video that begins ‘Islam … wants 80 percent of humanity enslaved or exterminated.’ Do you agree with him?”

“The director of the National Security Agency said, in reference to Wikileaks’ release of hacked emails of various Democrats, ‘This was a conscious effort by a nation-state to attempt to achieve a specific effect.’ Will you declassify the evidence for this, and support a congressional investigation into whatever happened?”

4. Botched coverage by other outlets

Here’s the headline on the Los Angeles Times story about the New York Times interview: “Trump shifts on at least 3 prominent issues: Climate, torture and prosecution of Clinton.”

Other headlines have included, “Donald Trump changes his mind on climate change, Clinton, the press in meeting with The New York Times“, In Stunning Reversal, Trump Scraps His Calls to Bring Back Torture, Trump Reverses Course on Clinton, and many others like them.

While some of these stories are more equivocal in the ninth paragraph, anyone who just glances at them will get a highly misleading impression.

Second, Trump did not actually say he’d changed his mind on any of these issues.

In fact, on torture he made that explicit — that while Retired Marine Corps Gen. James Mattis, his potential defense secretary, had told him torture was a terrible idea, “I’m not saying it changed my mind.”

When he was asked about prosecuting Clinton, and whether he was “taking that off the table,” he specifically said he was not doing so.

On global warming, he merely said, “I have a totally open mind” and that “I think there is some connectivity” between human activity and the climate. Maybe this is an improvement from believing that global warming is a hoax invented by the Chinese. But not necessarily.

So even given the best possible circumstances, the best corporate media outlet in the U.S. failed miserably. This suggests that longtime political organizer Mariame Kaba was completely right when she said this, and it’s going to be on all the rest of us to invent something new:

The mainstream press is/will be incapable of pushing back against Trump & his people. If you are counting on them, you shouldn't.

Top photo: President-elect Donald Trump waves to the crowd after leaving a meeting at the New York Times on Nov. 22, 2016 in New York.