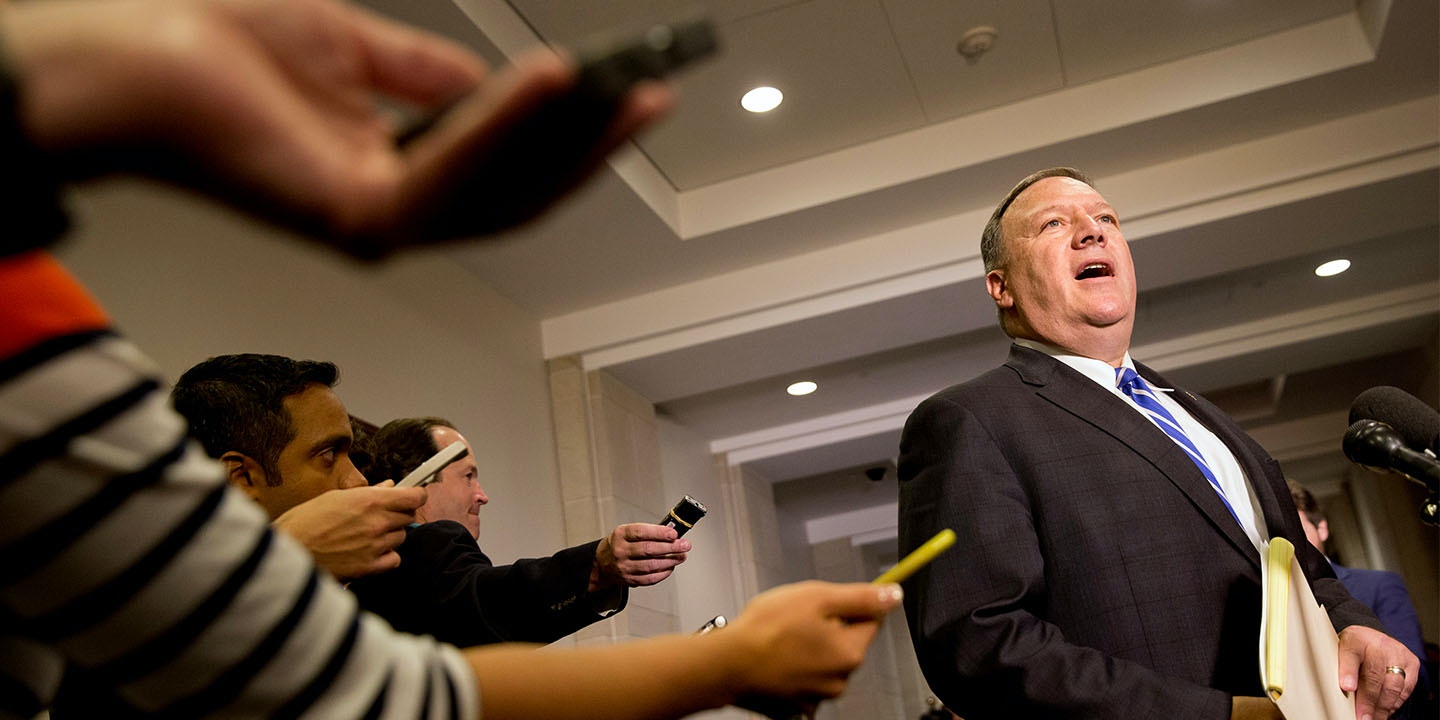 Mike Pompeo, Donald Trump’s pick to lead the Central Intelligence Agency, has at times depicted the fight against terrorism as a war between radical Muslims, on one side, and the Christian faith on the other.

“This threat to America,” Pompeo told a church group in Wichita in 2014, is from a minority of Muslims “who deeply believe that Islam is the way and the light and the only answer.”

“They abhor Christians,” Pompeo said, “and will continue to press against us until we make sure that we pray and stand and fight and make sure that we know that Jesus Christ is our savior is truly the only solution for our world.”

At an event last year sponsored by the Westminster Institute, a Virginia-based think tank, an audience member asked why President Obama wants Iran “to win,” and whether such sympathies came from “new leftism or socialism or pro-Muslim” ideas.

Pompeo didn’t reject the idea. He said he had “made a commitment to my wife that I would stop trying to get into Barack Obama’s head. You know, to reduce our psychiatric care bill.” Still talking about Obama, Pompeo said that “just as with any leader, their intentions and motivations are very important to understand. Right? It requires you to apply a rational approach to thinking about this and I for the life of me cannot come up with a rational approach for him.”

He continued: “Every time there has been a conflict between the Christian west and the Islamic east, the data points all point to a singular direction. You asked me why. That gets trickier, right? It is very clear that this administration — and when I say that, a very narrow slice inside the leadership regime here in Washington has concluded that America is better off with greater Iranian influence certainly in the Middle East, but I think around — certainly it’s tolerated around the world. But if you ask me why they think that, I’ve listened to them intently and I cannot with any certainty provide you an answer to that.”

At an evangelical church in his district that specializes in addressing “Satanism and paranormal activity” — and standing in front of a Christian flag — Pompeo in 2015  spoke of the “struggle against radical Islam, the kind of struggle this country has not faced since its great wars.” He warned that “evil is all around us,” citing reports of terror plots, and cautioned the congregation not to be deterred by those who might call them “Islamophobes or bigots.”

The Kansas lawmaker is best known in the national media for his zealous investigations of Hillary Clinton’s response to the 2012 attack on the U.S. government facility in Benghazi and as a reliable voice in support of the intelligence agencies. He has pushed for broad National Security Agency powers and supports interrogation techniques broadly viewed as torture.

But less has been reported on Pompeo’s history of blending religion and politics.

Earlier this year, the congressman shocked the Islamic Society of Wichita, a local mosque in his district, by publishing a statement denouncing the group for inviting a speaker he alleged had ties to Hamas. The speaker had spoken four times to the mosque in the past without incident.

But Pompeo, in his statement, released without prior notice to the mosque, charged that the Islamic Society of Wichita’s event was an insult because it coincided with the Christian holiday of Good Friday, and that if the mosque failed to rescind the invitation, they would be “responsible for the damage among religious faiths that is sure to follow.”

Local Facebook groups planned to protest the mosque in response, leading Hussam Madi, the spokesman for the local Islamic Society, to cancel the event.

Pompeo told the Wichita Eagle that he had been tipped off about the event by a call, but declined to reveal the source of the information. In April, the month after the incident, Pompeo appeared on Secure Freedom Radio, a program hosted by anti-Muslim campaigner Frank Gaffney, to boast that he had used Gaffney’s organization as a resource to research the speaker. Gaffney is notorious for spreading fears about Muslims, claiming absurdly that President Obama is “still” a Muslim, that Gov. Chris Christie had committed “treason” for appointing a Muslim judge. He runs a website that claims that Islam is not a religion, but a political ideology bent on destroying Western civilization.

In 2013, following the Boston Marathon bombings, Pompeo launched an attack on Muslim leaders, claiming that the Muslim American community had refused to denounce the attacks. “Mr. Speaker, it’s been just under two months since the attacks in Boston, and in those intervening weeks, the silence of Muslim leaders has been deafening,” Pompeo said. The silence, he added, made Muslim leaders “potentially complicit” in terror attacks.

As activist Anai Rhoads noted in the Huffington Post, Muslim leaders worked closely with law enforcement to thwart potential attacks, and there were many statements denouncing the Boston bombing by the largest Muslim organizations in the U.S. immediately following the attack.

Rhoads wrote: “The Boston attacks occurred on April 15 at approximately 2:49 p.m. The Universal Muslim Association of America spoke out against the attacks at 5:17 p.m.; the Muslim Public Affairs Council at 5:53 p.m.; the Council on American-Islamic Relations [CAIR] 7:46 p.m.; the Muslim Peace Coalition 8 p.m. and the Muslim American Society Public Affairs and Engagement 10:52 p.m. The only organization which moderately delayed a response was the Islamic Society of North America, and that was 12:09 a.m. on April 16.”

CAIR called for an apology, but Pompeo, in a statement, said he was “not backing down.”

The Kansas lawmaker has frequently appeared on Christian right radio, including on a program hosted by the Family Research Council — a group, like Gaffney’s, that has promoted fears about Islam. Pompeo is an opponent of gay marriage, and was among a handful of legislators to demand that the Air Force return the phrase “so help me God” to its military oath.

In first bid for office in 2010, Pompeo’s campaign tweeted a link to a blog that mocked his Democratic opponent, Raj Goyle, with a racial slur and said that Goyle, a local state lawmaker, “could be a muslim a hindu, a buddhist, who knows … One thing’s for sure … goyle is not a Christian!” Pompeo called Goyle to apologize, blaming the tweet on a staffer, but declined to fire the staff member responsible for the communication.

Since moving to Capitol Hill, Pompeo has participated in the Monday evening evangelical bible study for members of Congress sponsored by Ralph Drollinger, a clergyman who has courted controversy by lashing out at gays and calling Catholicism the “world’s largest false religion.” Drollinger’s group has been sponsored by Christian right lawmakers including Michele Bachmann, Steve King, and Louie Gohmert.

Drollinger’s Members Bible Study includes a study guide declaring: “NOT EVERY MUSLIM IS A TERRORIST BUT EVERY INTERNATIONAL TERRORIST IN RECENT HISTORY HAS BEEN A MUSLIM.” Drollinger’s guide argues that the Bible teaches that “there is no way America or Israel should tolerate uranium enrichment programs in any theocratic Muslim country.” The guide also claims “that Islam and its Koran are nothing more than a plagiarism of OT truths,” a reference to the Old Testament, “and a non-chronological, sloppy one at that — topped off with a falsified diminution of Jesus Christ.”

After the announcement last Friday that Pompeo will be nominated as the director of the CIA, Drollinger released an exuberant message on his website. Pompeo, along with Sen. Jeff Sessions, R-Ala., Trump’s nominee for the position of attorney general, and Mike Pence, the vice president-elect, are all “long time sponsors of the Members Bible Studies” it noted.

“It follows then that the sudden rise of Pence, Sessions, and Pompeo — all men who are disciples of Jesus Christ — serve to vividly illustrate the truth of 1 Timothy 2:1-4!” Drollinger said. That passage calls for “supplications, prayers, intercessions, and giving of thanks” for “all people” including “kings and all those in authority”.

Drollinger continued: “Suddenly these men who have been discipled by the Church are in prominent positions of authority to change the course of America in ways that are biblical.”

Top photo: Pompeo during a break in testimony at a closed-door hearing of the House Benghazi Committee in October 2015.

Artificial intelligence firm Dataminr is making questionable use of its Twitter firehose privileges — and not for the first time.

The least-discussed Congressional proceedings are often the most consequential — and almost always bipartisan.