If Trump decides to move forward with mass deportations, he will have access to an existing deportation infrastructure built with bipartisan consensus. President-elect Donald Trump’s reaffirmation of his campaign trail vow to immediately deport 2 million to 3 million undocumented immigrants has roiled communities across the country. Local leaders have attempted to calm their constituents, with authorities in California offering particularly strident opposition. California Senate President Pro Tem Kevin De León called Trump’s plan “catastrophic” and vowed that the state would “aggressively avail ourselves of any and all tools” to protect the rights of undocumented residents.

Remarks by Los Angeles Police Chief Charlie Beck about his agency not cooperating with any new deportation push garnered the highest praise from the national press and immigrants’ rights advocates.

“We are not going to work in conjunction with Homeland Security on deportation efforts. That is not our job, nor will I make it our job,” Beck said on November 14.

The reality of street policing in California is quite different. Police and sheriffs in California — including the LAPD — and across the country have been routinely cooperating with Immigration and Customs Enforcement for years to deport people accused of gang ties. Joint federal-local gang task forces targeting transnational gangs such as Mara Salvatrucha and 18th Street were formed during George W. Bush’s presidency as part of Operation Community Shield, and they have continued to operate through Barack Obama’s two terms. Today, the deportation of people accused of gang membership or association is strongly emphasized under the Obama administration’s Priority Enforcement Program, which focuses on identifying and deporting undocumented immigrants with criminal records. 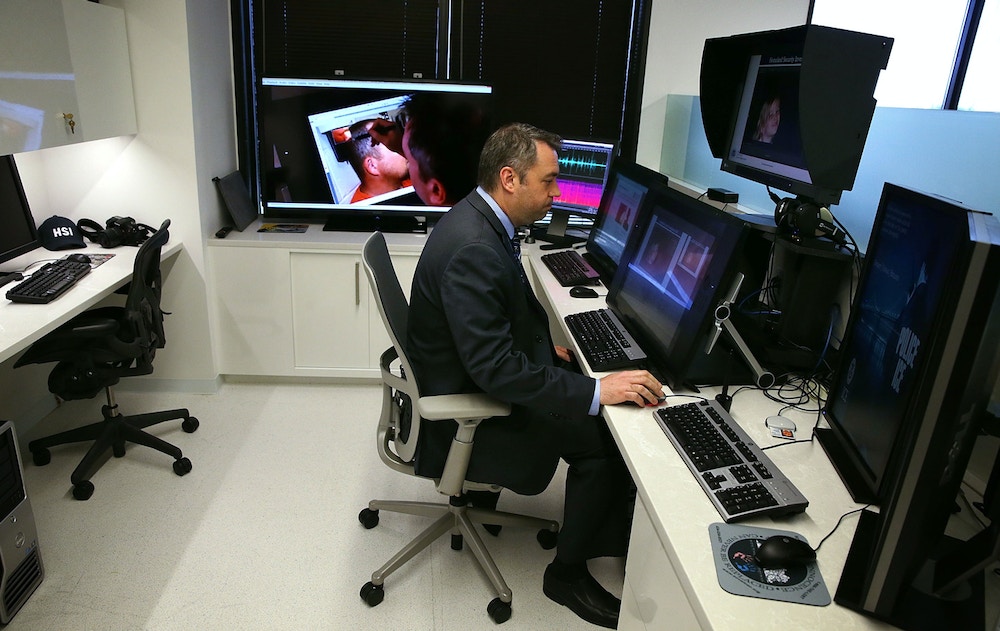 Special Agent James Cole during the unveiling of a major expansion of the ICE Cyber Crimes Center on July 22, 2015, in Fairfax, Virginia.

Should Trump decide to move forward with mass deportations, he will have access to an existing deportation infrastructure built with bipartisan consensus over the past decade. And at the heart of it is a sprawling database that ICE uses to siphon information on undocumented migrants with alleged gang ties from state and local law enforcement. According to information provided by ICE in August 2016, the agency has arrested more than 40,000 alleged gang members over the past decade. The agency has not made public how many gang-related deportations it has carried out. There were a record 2.5 million deportations in the first six years of the Obama administration.

In the mid-2000s, ICE created a gang database similar to those used in Arizona, California, the District of Columbia, Florida, Georgia, Maryland, New Mexico, Nevada, North Carolina, Minnesota, South Carolina, Texas, Washington state, Wisconsin, and Virginia. ICE’s system contains an unknown number of people, but there are more than 250,000 people in California’s and Texas’s gang databases alone, the majority of whom are Latino. These databases are populated with intelligence from street stops and arrests by local police, which is then uploaded and shared between agencies. ICE’s has access to all of them.

There is no accurate tally of how many people are in gang databases around the country, or how many of those people are undocumented. In late October, The Intercept filed a lawsuit over ICE’s refusal to respond to Freedom of Information Act requests for data and documentation of its gang database.

These data sets contain unverified and potentially flawed information derived from field interviews and arrests that may never result in criminal charges or convictions. Earlier this year, California’s state auditor found rampant inaccuracies in the state’s CalGang system, which included dozens of people with insufficient evidence of supposed gang ties.

Peter Bibring, a senior attorney at the American Civil Liberties Union of Southern California, said the flaws in CalGang’s data heighten the need to restrict ICE’s access to that information. “The system is so error prone that a significant number of people lack any supporting justification for whether they are gang members,” Bibring said. “It’s irresponsible of the state to be using CalGang, let alone handing over information to ICE.”

Remarks last week by Trump’s immigration adviser, Kansas Secretary of State Kris Kobach, indicate that the incoming administration is looking at deporting people accused of being in gangs who have not been convicted of a crime. If law enforcement knows an undocumented person is gang affiliated at the time of arrest, Kobach said, “we ought to get him out of the country.”

Despite the glaring problems with unverified gang intelligence being used for deportations, in which there are no rights to court-appointed legal representation or discovery, law enforcement veterans expect no changes from the way gang task forces work with local police under Trump’s presidency.

“I don’t see any changes to the current state of affairs — things will continue just like they are today,” said Wes McBride, a retired sergeant with the Los Angeles Sheriff’s Department and the head of the California Gang Investigator’s Association.

“I can’t see any real defiance of the federal government because they control the purse strings,” said McBride, adding that he believed the Trump administration would retaliate against any state that refused to cooperate with ICE’s deportation policies.

In recent months, there has been significant pushback by advocacy organizations against joint federal-local immigration raids in Southern California. On April 26, a coalition of 18 community groups sent a letter to Chief Charlie Beck about the LAPD’s cooperation with ICE during a series of raids on “casitas” where gang members allegedly ran gambling and prostitution rings. The raids, which were conducted on the basis of search warrants obtained by the LAPD, resulted in at least two women without prior gang-related arrests or charges being arrested and placed in deportation proceedings.

Since 1979, an LAPD directive called Special Order 40 has barred its officers from detaining or arresting people for the sole purpose of learning about their immigration status. The April 26 letter calls into question how strictly that directive is being followed on a daily basis. “LAPD routinely engages in joint operations with HSI/ERO [Homeland Security Investigations and Enforcement and Removal Operations, two branches of ICE] that have resulted in ICE and LAPD making collateral arrests, with ICE placing undocumented LA residents in immigration enforcement proceedings, even when the individuals are not charged with any crime,” the letter reads.

“It certainly violates the spirit of Special Order 40 when they’re engaging in these task forces that appear to be designed specifically for the purpose of immigration enforcement,” said Jennie Pasquarella, the director of immigrants’ rights for the American Civil Liberties Union of California.

The Los Angeles Police Department did not respond to requests for comment on the department’s participation in ICE task forces or regarding the enforcement of Special Order 40.

Erika Pinheiro, an immigration attorney with the Central American Resource Center in Los Angeles, has handled several gang-related deportation cases. Being classified with a gang association does away with any protections for undocumented immigrants established by California lawmakers. “Once police decide you’re a gang member, all your due process protections go away,” Pinheiro said.

Since the November 8 elections, immigrants’ rights organizations have been flooded by people concerned about a potential surge of raids and deportations. Pinheiro said her group had over a thousand people contact them just in the past week.

Despite the palpable panic in some migrant communities and the long-standing distrust of police, Pinheiro is hopeful that the posture of the LAPD’s Chief Beck and state lawmakers will lead to meaningful reforms of local cooperation with immigration officials.

“I’m hopeful that Charlie Beck’s statements mean this non-cooperation will be extended to this population,” said Pinheiro. “However, right now it seems like Special Order 40 doesn’t apply when LAPD is working in these interagency task forces — they’re literally rounding people up with ICE.”