Sixteen years before he became the first Muslim elected to Congress, Keith Ellison explained his support for the Nation of Islam in columns that showed no signs of the bigotry associated with its leader. 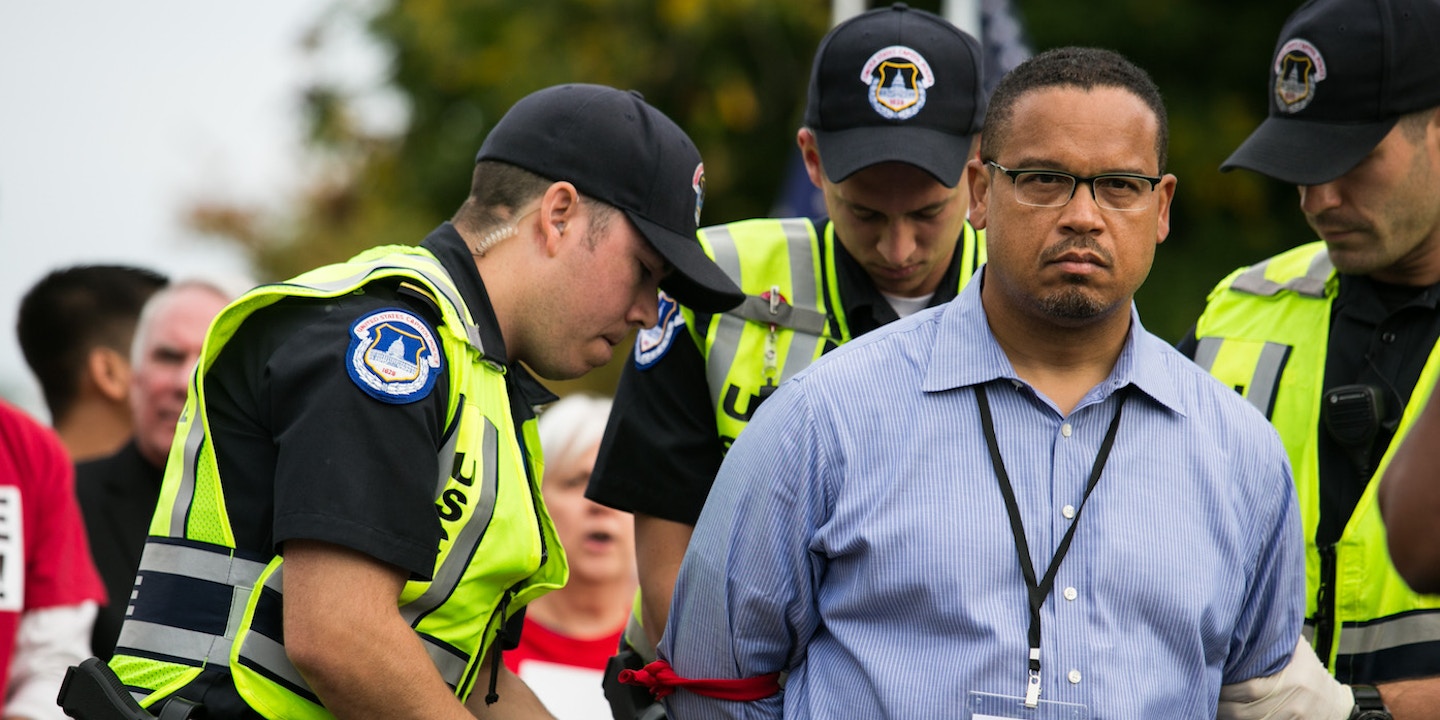 Minnesota Rep. Keith Ellison’s bid to lead the Democratic National Committee has set off a flurry of articles noting his affinity, in his younger years, for the Nation of Islam — a black separatist group that practices a nontraditional form of Islam, whose former leader, Louis Farrakhan, frequently engaged in anti-Semitism and anti-white speech.

Ellison has been reticent to talk about the topic, even canceling a New York Times interview after reporters asked him about it.

But those wishing to learn more about Ellison’s views as a young man — not long after he converted to Islam and 16 years before he became the first Muslim elected to Congress — can look to columns that he wrote as a law student at the University of Minnesota in 1989 and 1990 for the university’s student newspaper.

They provide insight into why he was drawn to black nationalism and the Nation of Islam. They show a younger and angrier Ellison, who denounced white supremacy and the policies of the state of Israel. And while they show either a willful or naive ignorance of the Nation of Islam’s bigotry, they also show him expressing sympathy for the plight of underprivileged whites and making clear that he was not antagonistic toward Jewish people.

When Ellison ran for Congress in 2006, he told the Washington Post that he was initially drawn to Farrakhan because he saw him standing up for African-Americans — but that he didn’t approve of bigotry against Jews or others. “My perspective was a tunnel vision; I was mostly concerned about the welfare of the African-American community,” he explained to the Washington Post.

“I never said anything that was anti-Semitic, racist, homophobic in any way.” But he also admitted to being slow to pick up on the hatred espoused by Farrakhan.

The student newspaper columns he wrote as a law student seem to confirm his story. They also help illustrate a serious, lifelong commitment to social justice.

The conservative World Net Daily and Daily Caller websites recently ran articles decrying Ellison, who used the pen name “Keith Hakim” for one particular column they read as advocacy for a separate nation for black Americans — which is indeed an extreme policy proposal.

But that call was part of a longer, thoughtful discussion of the failures of affirmative action. In the February 2, 1990, column, titled “Affirmative action does not make up for past injustice,” he argued that America’s social programs were failing to truly address injustices committed against African-Americans, while also unfairly burdening working class white Americans.

“Conservatives have a point concerning affirmative action,” he wrote. “Why should marginally qualified white college students and blue-collar workers shoulder over 400 years of white supremacy alone? … Let’s face it — liberal social programs, including but not limited to affirmative action, foist the burden of brutal white savagery on the most marginally qualified whites, usually students or the white working class.”

This brought him to propose not a genuine alternative, but a thought experiment of sorts: “I have a challenge for all fair-minded middle- and working-class white people: I will urge black people to abandon white-dominated, integration-oriented, give-away programs if you urge white people to justly compensate black people for 250 years of slavery, 90 years of Jim Crow and 25 years of neo-Jim Crow.”

In that scenario, he suggested reparations in the form of cash compensation and giving blacks “the option of choosing their own land base or remaining in the United States.” Five states in the Deep South would become “the black state,” although neither whites nor blacks would be compelled to move, he explained.

It was more satire than a serious call to secede. 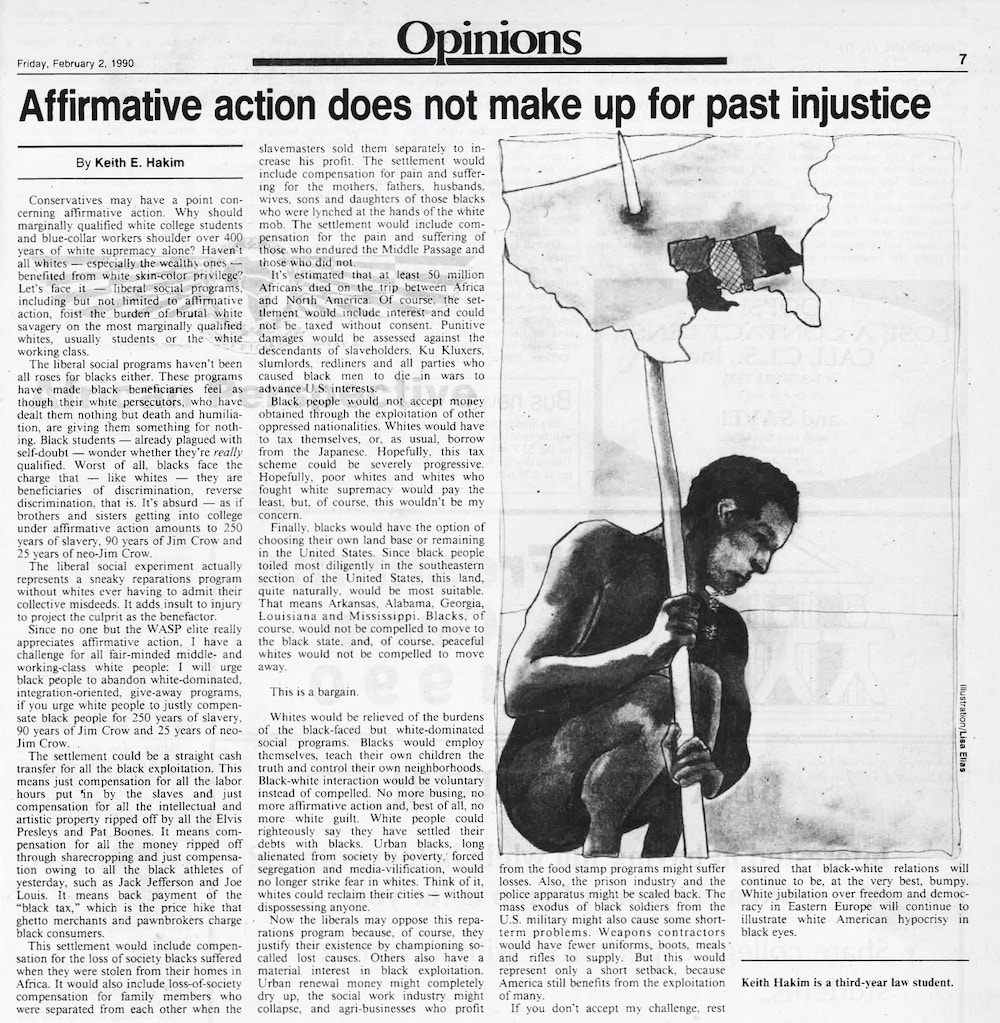 “Affirmative action does not make up for past injustice,” a column Keith Ellison wrote for his student newspaper under the pen name “Keith Hakim,” published on Feb. 2, 1990.

The columns do not endorse Farrakhan’s conspiratorial theories about Jews or his broadsides against all white people. Instead, they cite the group’s advocacy for social empowerment of black people as well as its charitable work and economic programs.

“The single most distinguishing characteristic of the Nation of Islam, from a black perspective, is the Nation’s message of economic self-determination,” he wrote in a November 27, 1989, column titled “Minister Farrakhan never claimed to be Malcolm X.” He was defending an invitation to Farrakhan to speak at the school. “Considering the Power Program, the bean pies and the fish stores, the black community knows the Nation to have a definite economic thrust.”

Ellison did not endorse racism or bigotry, but he also failed to even recognize the extremism in Farrakhan’s politics. He concluded that the hatred Farrakhan provoked was a reaction against his attempt to disrupt white supremacy.

Racism “has very definite characteristics. It means subjugation of one racial class by another,” he wrote in the same column. “For Farrakhan to be a racist he would have to be, at least, preaching subjugation of whites. Farrakhan, however, preaches cultural pluralism and repatriation, as opposed to integration.” The school columns also provide insight into how Ellison distinguished between being opposed to Israeli imperialism and being anti-Semitic.

In 1990, black students at the University of Minnesota invited Kwame Ture — the black activist more commonly known as Stokely Carmichael, a former leader of the Student Nonviolent Coordinating Committee — to address the school. Ture was under fire for comments he made disparaging Zionism, the founding philosophy of the state of Israel.

The university’s president, Nils Hasselmo, defended Ture’s right to speak but exclaimed that he found Ture’s views to be “deeply offensive.”

Ellison perceived Hasselmo’s comments as an attack on black students’ right to free speech, responding with a column titled “Blacks struggle for freedom of speech.” In that column, Ellison defended the invitation to Ture, but also separated criticisms of Zionism from those of the Jewish people. “If Zionism is nationalism — and not religion — then it is necessarily a political matter,” he wrote. “Political matters are always subject to debate, which means support or criticism. Those who opt to criticize Israel are not necessarily anti-Jewish.” From Angry Radical to Radical Reformer

Later in his life, Ellison left the angry and sectarian politics of the Nation of Islam behind and grew to recognize that extreme political speech and tactics were not the way to achieve his social goals.

For example, he is an outspoken supporter of Black Lives Matter, but also believes that engaging in tactics that turn people away rather than build coalitions is the wrong approach to create justice.

Last December, when a group of Minneapolis Black Lives Matter protesters camped outside a police building, he supported their goal — an investigation into the shooting of Jamar Clark, a black man killed by police. His own son joined the protesters and had a weapon pointed at him by police:

Photo is agonizing for me to see. My son is PEACEFULLY protesting w/ hands up; officer is shouldering gun. Why? https://t.co/TTUBR0fxtS

But as the encampment dragged on, there was increasing concern about public safety. Someone fired a gun amidst the demonstrators. Ellison called for the protests to end. Black Lives Matter protesters reacted with scorn:

. @MayorHodges @keithellison it's crazy how u r focused on ending the #4thPrecinctShutDown but not the issues that led to it #Justice4Jamar

Ellison insisted that he supported their goals, but that disrupting public life was not helpful:

#4thPrecinctShutDown is tactic; GOAL is #Justice4Jamar. Action is at grand jury, not blocking seniors from bus stop https://t.co/ItCcb1lf2c

It was as if Ellison was arguing with a younger version of himself.

Top photo: Minnesota Rep. Keith Ellison being arrested at a protest in favor of immigration reform on Oct. 8, 2013, in Washington, D.C.