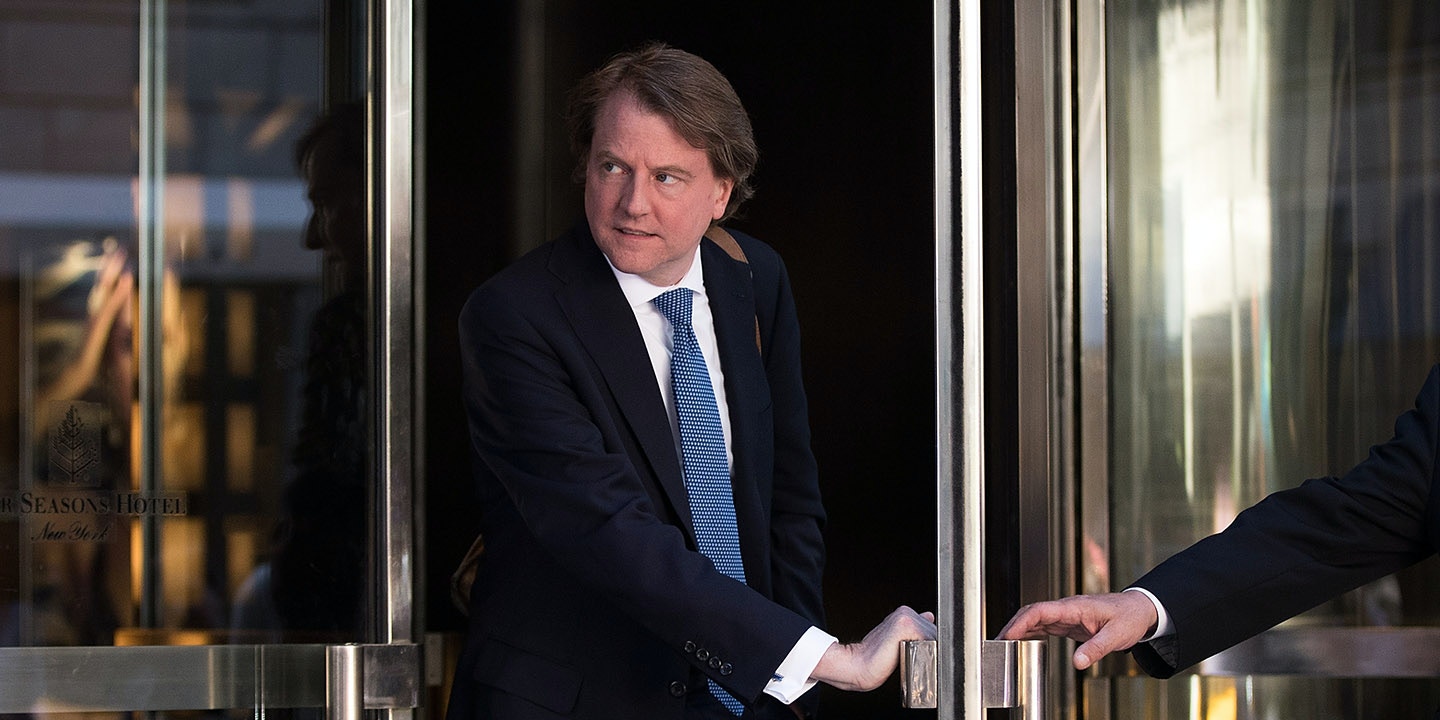 Don McGahn, soon to be Donald Trump’s White House counsel, bears as much responsibility as any single person for turning America’s campaign finance system into something akin to a gigantic, clogged septic tank.

From 2008 to 2013, McGahn was one of the six members of the Federal Election Commission, the government agency in charge of civil enforcement of campaign finance laws. While there, he led a GOP campaign that essentially ground enforcement of election laws to a halt.

“I’ve always thought of McGahn’s appointment as an FEC commissioner as analogous to appointing an anarchist to be chief of police,” said Paul S. Ryan, vice president at Common Cause. “He’s largely responsible for destroying the FEC as a functioning law enforcement agency, and seemingly takes great pride in this fact. McGahn has demonstrated a much stronger interest in expanding the money-in-politics swamp than draining it.”

This ideology — that essentially all limits on campaign contributions and spending are unconstitutional violations of the First Amendment — was developed by a loose affiliation of conservative lawyers including McGahn, beginning in the late 1990s. It started bearing fruit a decade later with a series of court decisions, including the Citizens United ruling in 2010. McGahn’s page on his law firm’s website describes him as one of the “architects of the campaign finance revolution.”

McGahn’s perspective manifested itself consistently at the FEC. Previously, when the agency received outside complaints alleging violations of the law, its general counsel’s office was responsible for conducting a preliminary examination of the issues and then making a recommendation to the commission members about the legal issues involved and whether to proceed with a full investigation.

McGahn was so extreme that he attempted to block the general counsel’s staff from reading news reports, using Google or looking at a campaign’s web site without prior authorization from a majority of the FEC commissioners. Had the measure passed, because the FEC has six members at full capacity and no more than three can be from one political party, Republicans would effectively have controlled what FEC lawyers were allowed to read.

McGahn also attempted to prevent the FEC’s staff from doing something it had done as a matter of course in the past: respond to requests for internal records from the Justice Department, which is responsible for criminal prosecution of campaign finance crimes, without formal approval from the commissioners. “He just did not want us to have a more cooperative relationship with the Justice Department,” Weintraub said.

McGahn’s losing battle nevertheless led the agency’s general counsel at the time to resign in frustration.

Now, as Trump’s White House lawyer, McGahn will provide crucial advice on the nomination of judges, including to the Supreme Court. While Trump has criticized Citizens United, and called the Super PACs that sprang up in its wake “horrible” and a “total phony deal,” McGahn is a vociferous defender of the ruling.

A White House’s lawyer essentially serves as the president’s conscience, and is in charge of the ethics rules. “I was hoping that the sea of conflicts of interest that surround Donald Trump and many of his appointees would convince Trump that he needs to pursue sweeping ethics reforms, especially for incoming administration officials,” said Craig Holman of Public Citizen. “The selection of McGahn to be the chief ethics cop strongly suggests the new administration is likely to be scandal-ridden and eventually perceived by the public as business as usual.”

Ryan considers McGahn to be “a very skilled lawyer who knows campaign finance and ethics laws like the back of his hand” and hence will give Trump accurate advice. Therefore, says Ryan, “when President-elect Trump engages in any questionable ethics practices, we’ll know he’s doing so with full knowledge of ethics standards. President-elect Trump has no excuses.”

McGahn began his career at Squire Patton Boggs, a famed D.C. law firm and lobby shop. The late Tommy Boggs, one of its cheerfully mercenary name partners, said that the firm’s moral code was “We pick our clients by taking the first one who comes in the door.”

In 1999, McGahn became chief counsel of the National Republican Congressional Committee, which coordinates campaigns for GOP members of the House of Representatives. While there he also represented House majority leader Tom DeLay of Texas in investigations into some of DeLay’s incredibly labyrinthian fundraising schemes.

One of these schemes led to DeLay being convicted of money laundering and sentenced to prison. (The conviction was later overturned.) But McGahn helped DeLay escape any consequences for another, in which the U.S. Family Network, a dark money nonprofit close to DeLay, received $1 million that DeLay’s former chief of staff told others came from Russian oil and gas executives. According to the president of U.S. Family Network, DeLay’s chief of staff said this money was specifically intended to buy his support for a 1998 International Monetary Fund bailout of the Russian economy. DeLay voted for the bill but later claimed the U.S. Family Network donation had nothing to do with it.

There’s no question that Americans loathe the way big money controls the U.S. political system. Many Trump supporters presumably believed they were voting to halt it in its tracks. Instead, all evidence suggests that Don McGahn will now be stomping on the accelerator.