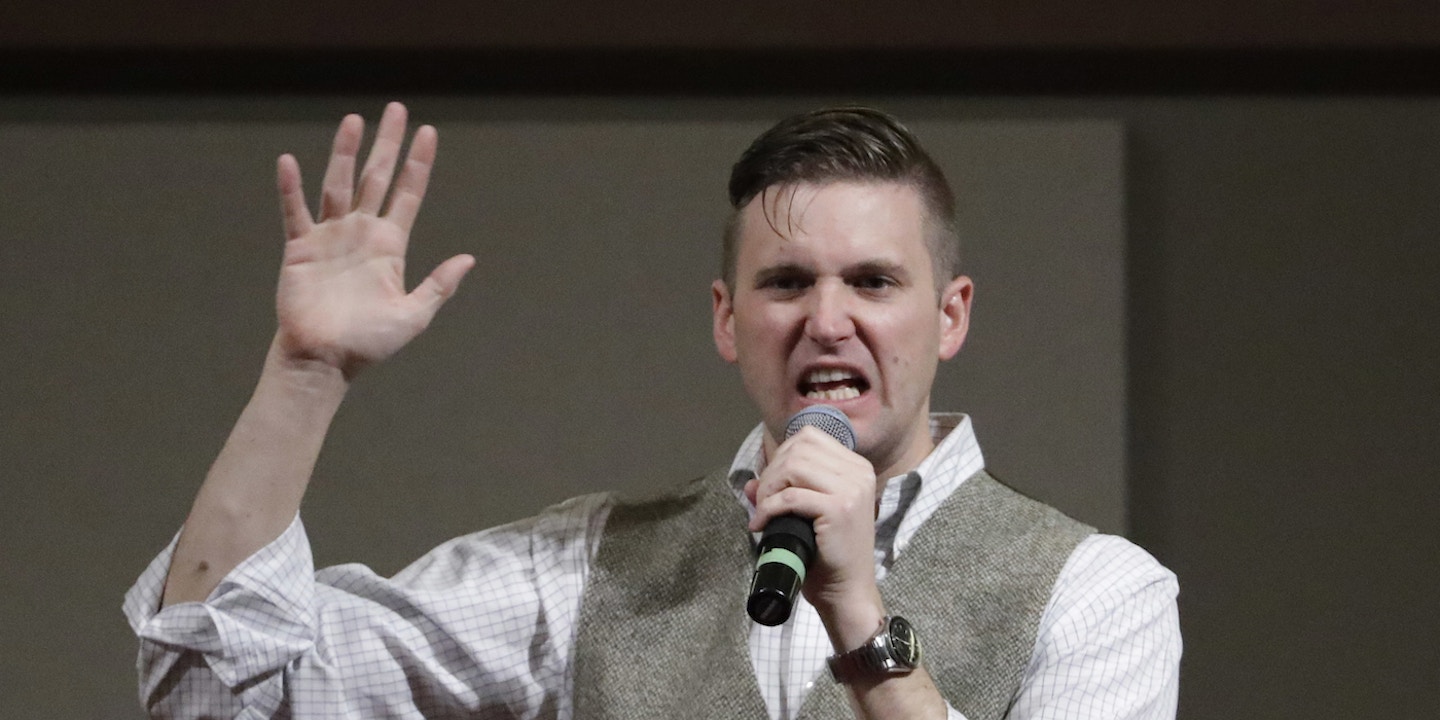 There were no Nazi salutes this time, at least. But Richard Spencer, the white supremacist Trump supporter trying to make racism cool by rebranding it “alt-right,” gave another rabble-rousing speech on Tuesday night, this time at Texas A&M University.

In case there was any ambiguity about his message, video posted on Twitter by Josef Winkler, a college sophomore who was repulsed by Spencer’s statements, showed him boasting that, because of the conquest of North America by European invaders, “America belongs to white men.”

This makes me sick

Spencer, who attended an exclusive prep school in Dallas, went on to describe the lessons that he took about how Texas was settled from his favorite movie, “The Searchers,” which stars John Wayne in the role of a racist former Confederate soldier.

Another clip recorded by Winkler — and a live stream of the entire event posted online by the school’s student newspaper, The Battalion — shows that Spencer went on to praise Donald Trump as “an alt-right hero” for reminding white Americans of what, he said, “makes the white race truly unique and truly wonderful.”

Spencer also reiterated what he said about immigration last month in Washington, during an event that did feature Nazi salutes from his supporters. Asked how he justified banning non-European immigrants, Spencer said, “because this is our goddamn country.”

"It's our Goddamn country" in response to a question about his propose immigration ban pic.twitter.com/xaeFUuuxqO

Spencer addressed dozens of supporters, and what CNN described as a larger number of protesters, in a hall rented by an alumnus of the school.

Some students have been in silent protest for the last hour or so pic.twitter.com/v3OTPOMeb6

On the campus outside, there were at least three protests, including one raucous gathering of more than a thousand protesters chanting “Racist Go Home!”

One of the protesters, Alison Macrina, told The Intercept that the lively demonstration on campus took place near the football stadium, where there was also “a school-sponsored anti-hate pep rally that convened entirely because of the Richard Spencer event.”

Macrina, a digital privacy activist in Houston, added that some of the more conservative students who initially attended the rally inside the stadium later joined the demonstration outside, “when they saw that the outdoor protest was massive, peaceful, and pretty fun.”

As The Battalion reported, the rally in the stadium was addressed by University President Michael Young, the Texas A&M quarterback Trevor Knight, and Max Glauben, a Holocaust survivor, and it also featured music and dance performances.

Earlier in the day, Spencer had scoffed at the school-sponsored rally, telling reporters that the university’s president seemed to be afraid of letting students hear his message. “You’re here right now because you know in your bones that the alt-right is the future,” Spencer said at a news conference. “You know that white identity politics is ineluctable. You know that white identity politics is going to enter the world and it is going to be a powerful force in the 21st century.”

After the event, one of the attendees, a young man wearing one of Trump’s Make America Great Again caps, told a Battalion reporter that he was impressed by Spencer’s “good, resounding message,” that white Americans should respond to “demographic change” by embracing what he called their distinct racial identity.

“From the thing as a whole, with everyone’s reaction and everything, I think that those words that he says certainly leave an impact, to the point where, as an outsider, who’s just new to this, and new to everything, I do think that he does bring up some valid arguments, with his message, simply because it creates so much tension,” Spencer’s new fan said. “If they weren’t valid, no one would care.”