What President Obama Should Have Said at His Last Press Conference

President Obama failed to provide moral and political leadership in his final press conference. Here’s what he should have said. 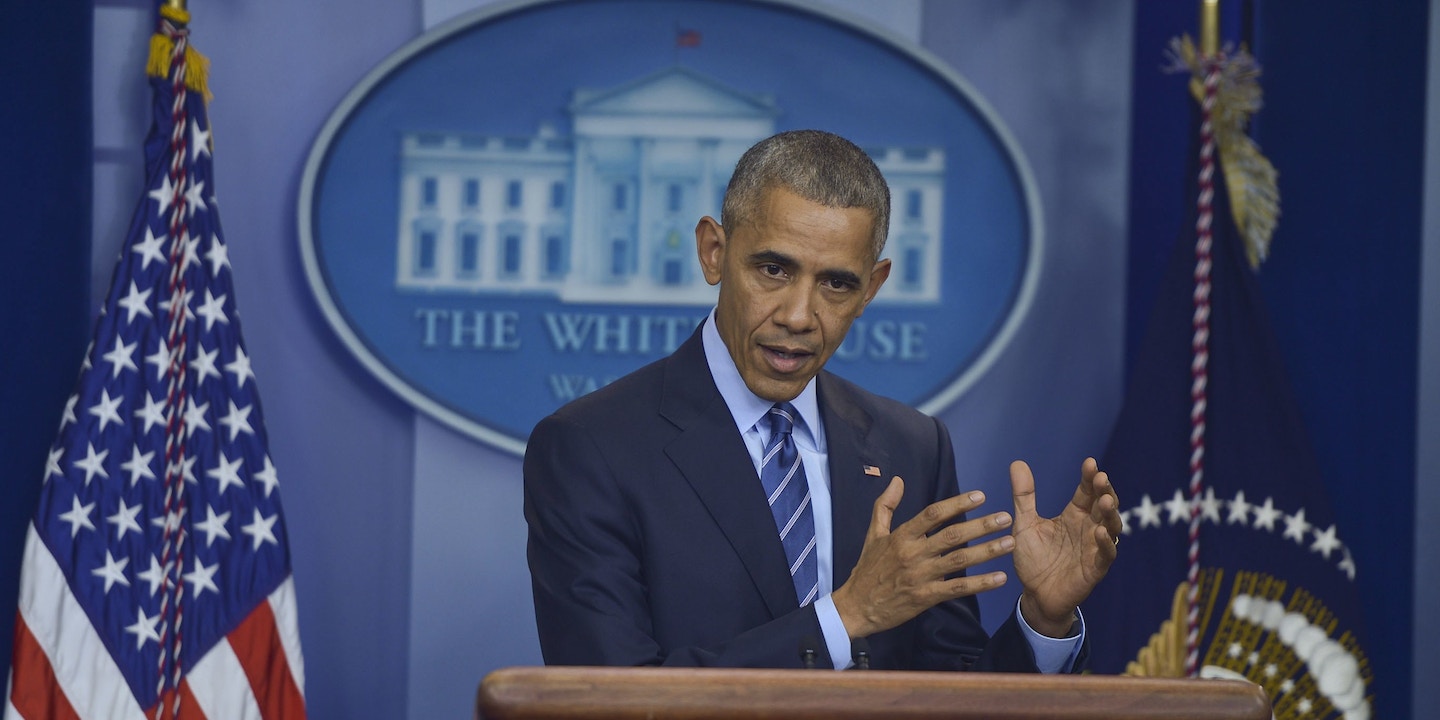 OBAMA: Good afternoon, everybody. What a year, right? Just last night, I tried to sign on to Twitter to wish everyone a happy holiday, but Michelle wouldn’t give me my password. She said it embarrassed her when no one retweets my jokes. I guess I’m just too boring.

OBAMA: Normally, I use these end-of-the-year press conferences to run down what we’ve accomplished over the preceding twelve months. Then I take a couple of questions from you guys. Today, the format will be slightly different. Let’s talk about the future.

On Monday — just three days from now — the 538 Americans who make up the Electoral College are scheduled to gather in statehouses around the country, where they will cast their votes for the next president. This is all part of our political process to ensure the peaceful and democratic transfer of power. Normally, the casting of these votes is a formality. But 2016 is not a normal year.

Donald Trump, as you all know, prevailed at the polls in 30 states. Together, those states have 306 electoral votes. The question that many of us have been struggling with is whether Donald won fair and square. After the election, we read what appears to be a Facebook status update from one of Vladimir Putin’s political allies, Aleksandr Dugin: “Washington is ours.” Think about that for a moment.

Now, we in the White House already knew that the Russians were trying to interfere with the election. We shared some information with the public over the summer. Later, we called Putin’s government on the nuclear hotline and told them to stop. But this gloating from Dugin — that really got to me. As if America were some banana republic where the will of the people can be manipulated through disinformation. Yes, some of my predecessors have done the same to our neighbors in Latin America and elsewhere. But don’t expect me to just lie back and take it if I see evidence that it’s being done to us.

We know that the Russian government hacked into the systems of both major U.S. parties, Republicans and Democrats. But the emails that they chose to publicize were carefully chosen to cause embarrassment to only one party — the Democrats. And you might remember that Donald, in the middle of the campaign, made a direct request of the Russian government to keep doing what they were doing. “Russia, if you’re listening,” he said, “I hope you find the 30,000 emails that are missing.”

Now, do we know that Putin personally authorized these hacks? No. We don’t. But we do know some of the names of the folks who ordered and carried out these hacks. They belong to the Russian military and intelligence apparatus. We know who they are and what they said, because — and this may not come as a complete surprise — we are listening to their phone calls. So if you’re wondering whether something very wrong happened during the weeks leading up to November 8, something that threatens the self-rule we’ve enjoyed for the past 240 years, let me give it to you straight: The answer is yes, and the evidence is strong.

After the election, I reached out to Donald. I tried to explain to him why this hacking stuff is a problem, not just for Democrats, but for our entire system of government. I showed him the evidence collected by our intelligence community that demonstrates the Russian government’s involvement in these hacks. I asked him to promise that as president, he would continue my investigation of what happened, so that we could prevent this from happening again.

I think it’s worth pointing out that Donald is a smart guy. But he is not always the best listener. I am sorry to report that he isn’t interested in carrying this investigation any further. In fact, he is not interested in listening to much of what our intelligence agencies have to tell him. He says he doesn’t need daily intelligence briefings. “Donald,” I said. “You know a lot, but you don’t know everything.” On Russia, and on a number of other issues, it concerns me how hard it is to get him to show the slightest interest in what he doesn’t know, especially if it is something that he doesn’t want to believe. He now says that he thinks our intelligence on Russia is driven by politics. “I don’t believe they interfered.” That is what Donald says now about the same people who he called upon for help during the campaign.

As president, this puts me in a tough position. I don’t want to mess with the will of the people. If the electors want Donald Trump to be the next president of the United States, so be it. But neither do I want to reward a foreign power for tampering with an American election.

So today I am calling upon Congress to pass a law that will delay this year’s meeting of the Electoral College by 14 days. If Congress won’t do it, I think the state legislatures need to step in and do it. And if the states won’t do it, the Department of Justice is going to ask the courts for an injunction to give us those 14 days. It would not be right for the electors to cast their votes now, with so much uncertainty in the air about the facts of what happened during the election. We need to ensure that this next phase of transferring power to the future president is not tainted by bad information.

I am also instructing James Clapper, the Director of National Intelligence, to arrange for briefings to any elector who wants one. Fifty-six electors have signed a letter asking for an intelligence briefing on Russia’s role in this election. They want access to the best possible information before they cast their votes. As president, I see it as my duty to provide it.

Director Clapper has also agreed to immediately declassify and release as much of our intelligence on the election as possible. You should see those files appearing in your email in-boxes by this evening. They’ll be PDFs. I suggest that you run them through a virus scanner before you click on them. Careless clicking, after all, is part of what got us here in the first place.

Let me say one more thing about the Electoral College. There’s been a lot of back-and-forth about why we have it, whether we should keep it, and what purpose it might still serve today. Some have cited Federalist 68, by Alexander Hamilton. I should note that the Federalist Papers are not actually part of the Constitution. They do, however, offer us a window into the thinking that went into it. In Federalist 68, Hamilton worries about the possibility of a president with “talents for low intrigue, and the little arts of popularity.” He says that our American system of election will ensure, to “a moral certainty, that the office of President will never fall to the lot of any man who is not in an eminent degree endowed with the requisite qualifications.”

Now, does Donald Trump have the requisite qualifications to be president? That’s not my call to make.

And with that, I will take your questions.