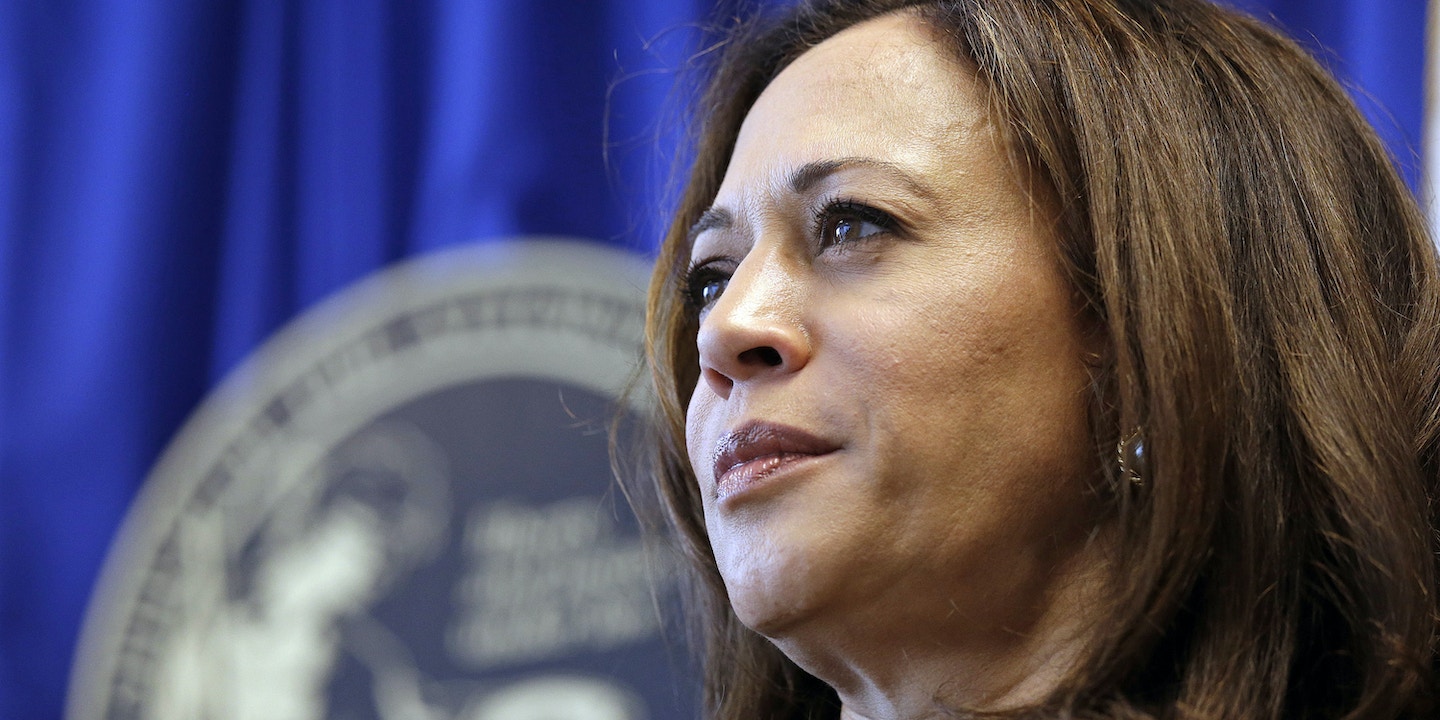 Former California Attorney General Kamala Harris on Wednesday vaguely acknowledged The Intercept’s report about her declining to prosecute Steven Mnuchin’s OneWest Bank for foreclosure violations in 2013, but offered no explanation.

“It’s a decision my office made,” she said, in response to questions from The Hill shortly after being sworn in as California’s newest U.S. senator.

“We went and we followed the facts and the evidence, and it’s a decision my office made,” Harris said. “We pursued it just like any other case. We go and we take a case wherever the facts lead us.”

Mnuchin is Donald Trump’s nominee to run the Treasury Department, and served as CEO of OneWest from 2009 to 2015. In an internal memo published on Tuesday by The Intercept, prosecutors at the California attorney general’s office said they had found over a thousand violations of foreclosure laws by his bank during that time, and predicted that further investigation would uncover many thousands more.

But the investigation into what the memo called “widespread misconduct” was closed after Harris’s office declined to file a civil enforcement action against the bank.

Harris’s statement on Tuesday doesn’t explain how involved she was with the decision to not prosecute, or why the decision was made. She also would not say whether the revelations would disqualify Mnuchin for the position of treasury secretary. “The hearings will reveal if it’s disqualifying or not, but certainly he has a history that should be critically examined, as do all of the nominees,” Harris told The Hill. She added that she would review the background and history of all Trump cabinet nominees.

Senate Democrats have vowed to put up a fight over Mnuchin — even creating a website inviting homeowners to list their complaints against OneWest. And yet not one senator has commented publicly on the leaked memo, which received media coverage in Politico, Bloomberg, the New York Post, CBS News, Vanity Fair, CNN, CNBC, and other outlets.

The Intercept has reached out to half a dozen Senate Democratic offices, including those of Minority Leader Chuck Schumer and leading Mnuchin critics Bernie Sanders and Elizabeth Warren, receiving no response.

Sen. Tammy Baldwin, D-Wisc., retweeted the story, as did the Twitter account of the Democratic National Committee. But another DNC tweet just hours later hinted at the bind Democrats are in when it comes to using the information against Mnuchin. That tweet praised Harris’s swearing-in. Her decision not to prosecute may make her new colleagues wary of pursuing it.

Progressive groups have not been so reluctant. Three groups — the Rootstrikers project at Demand Progress, the Center for Popular Democracy’s Fed Up Campaign, and the California Reinvestment Coalition – have called for a delay of Mnuchin’s confirmation hearing until he publicly discloses all settlements and lawsuits OneWest has faced from its foreclosure-related activities, responds fully to all questions submitted by members of the Senate Finance Committee, and publicly discloses his role in obstructing the California attorney general investigation, or any others.

The California Reinvestment Coalition followed that up on Thursday by asking OneWest to release the obstructed evidence, which involved loan files held by a third party then known as Lender Processing Services (it’s now called Black Knight Financial Services). “That’s something the Senate Finance Committee should ask him for, prior to scheduling their hearing with him,” said Paulina Gonzalez, executive director of the California Reinvestment Coalition.

Mnuchin has already declined to answer a detailed list of questions from Finance Committee member Sherrod Brown, which Brown sent before the release of the leaked memo.

After The Intercept story was published, Mnuchin spokesperson Barney Keller called it “meritless,” and highlighted OneWest’s completion of a foreclosure review with the Office of the Comptroller of the Currency (which involved completely separate issues from the California inquiry) and what he claimed was OneWest’s issuance of over 100,000 loan modifications to borrowers.

“Memos like this belong in the garbage, not the news,” Keller said.

Meanwhile, the Alliance of Californians for Community Empowerment, an organizing group that made headlines in 2010 by protesting on Mnuchin’s front lawn over OneWest’s foreclosure practices, expressed disbelief that he could now become treasury secretary. “My family lived first hand the fraud and unethical behavior under his leadership when I was told to default before they could help me, and (was) instead pushed into foreclosure,” said Peggy Mears, a OneWest victim.

ACCE plans to ask incoming California Attorney General Xavier Becerra to take up the prosecution of OneWest based on the newly released evidence. And the group vowed to fight the Mnuchin nomination. “No one who oversaw the defrauding of thousands of homeowners should be allowed to serve watch over our country’s money,” Mears said.