In her confirmation hearing, Betsy DeVos repeatedly denied that she was on the board of her mother’s anti-gay foundation. 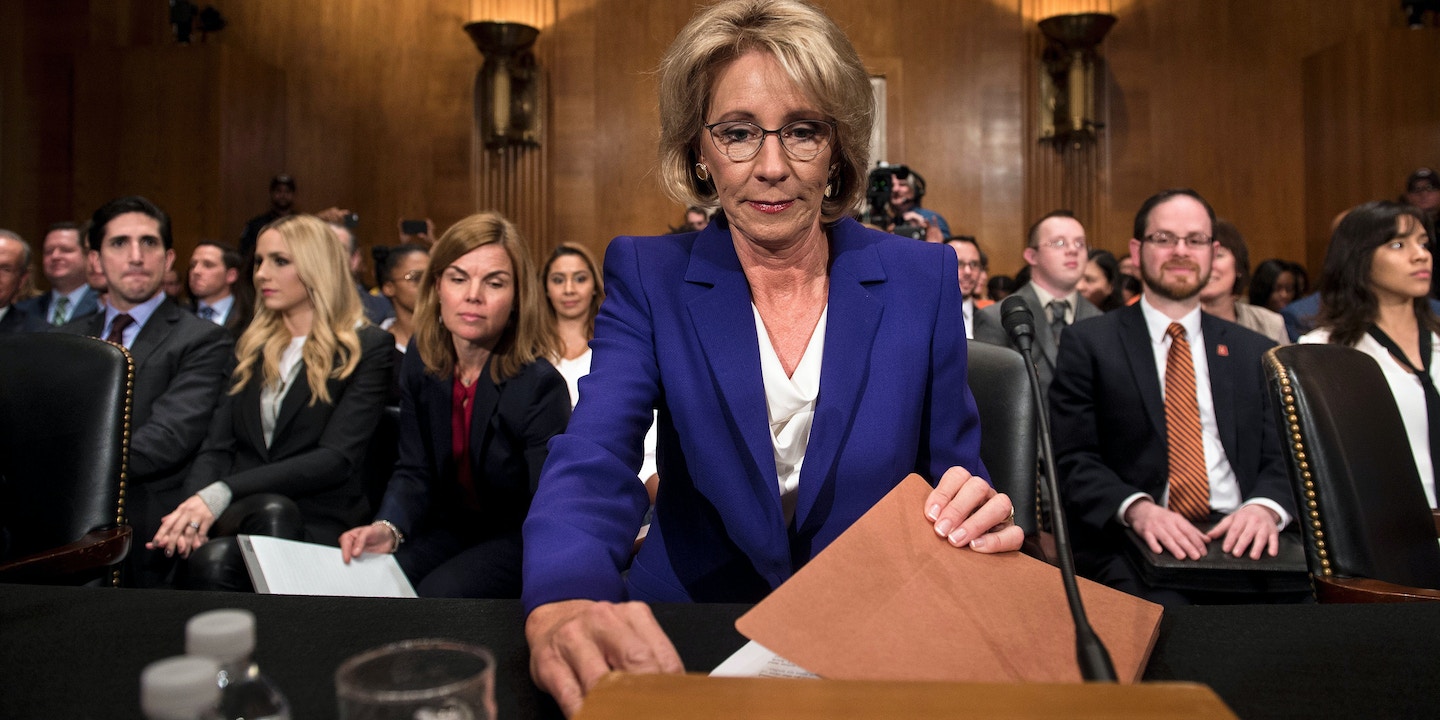 There are many reasons Betsy DeVos’s nomination to serve as Donald Trump’s education secretary could be justifiably quashed by the U.S. Senate. Her long public record indicates she is a religious Christian zealot who does not believe in the actual separation of church and state, wants public monies funneled into religious schools, and has contributed through family foundations to bigoted groups with a militant anti-gay agenda. During her confirmation hearing she gave disturbing answers to questions about her views of the Individuals with Disabilities Education Act, standardized tests, and school vouchers. She also suggested guns have a place in American schools, though her claim that they were necessary to defend students from grizzly bear attacks was not very compelling.

DeVos is married to Richard DeVos, the heir to the Amway Corporation fortune. She is also the sister of Blackwater founder Erik Prince, who is secretly advising the Trump team on intelligence matters, as The Intercept reported Tuesday. The Prince and DeVos families’ merger through marriage was reminiscent of the monarchies of old Europe, and since the 1980s they have funneled hundreds of millions of dollars into Republican campaign coffers and the war chests of far-right religious organizations, at least one of which — the Family Research Council — has been designated an anti-LGBTQ hate group by the Southern Poverty Law Center.

As Mother Jones pointed out:

The Dick and Betsy DeVos Family Foundation gave $275,000 to Focus on the Family from 1999 to 2001 but hasn’t donated since; it gave an additional $35,760 to the group’s Michigan and D.C. affiliates from 2001 to 2010. The Prince Foundation donated $5.2 million to Focus on the Family and $275,000 to its Michigan affiliate from 2001 to 2014. (It also gave $6.1 million to the Family Research Council, which has fought against same-sex marriage and anti-bullying programs — and is listed as an “anti-LGBT hate group” by the Southern Poverty Law Center. The FRC used to be a division of Focus on the Family before it became an independent nonprofit, with Dobson serving on its board, in 1992.)

During Tuesday’s hearing, the Democratic senators protested Republican chair Lamar Alexander’s unprecedented ruling that senators would only be permitted one round of questioning. Nonetheless, several senators pressed DeVos on the contributions made by her and other family members through their foundations. DeVos, clearly prepared for such questions, assured the committee that she has nothing to do with the contributions made by her mother’s foundation, the Prince Foundation (formerly known as the Edgar and Elsa Prince Foundation). DeVos said that her immediate family — presumably meaning her husband and children — had nothing to do with the financing of anti-gay causes and groups and that she has never supported “conversion therapy” for gay people.

Newly elected Democratic Sen. Margaret Hassan pressed DeVos on these claims. She asked DeVos directly if she was on the board of her mother’s foundation during the period in which large donations were made to Focus on the Family. DeVos said that she was not on the foundation’s board.

When I heard that, I pulled up the 990 tax documents of the Prince Foundation, which I investigated for my book “Blackwater.” Betsy DeVos was clearly listed as a vice president of the foundation’s board, along with her brother Erik, for many years, at least until 2014. DeVos was a vice president during the precise period Hassan was referring to. I then began a tweet storm about this lie:

Betsy DeVos just told Sen. Hassan she isn't on the board of her mom's foundation. She was vice president for several years! I have the 990s pic.twitter.com/x4A2Wx4Sdh

Betsy DeVos lied repeatedly during this hearing. She was VP of her mom's foundation when they poured money into anti-gay organizations.

. @SenHassan just asked DeVos about *several years* of Prince foundation 990s & her listing as VP. DeVos said it was clerical error. My god.

At the very end of the hearing, Sen. Patty Murray, the ranking Democrat on the committee, allocated the small time she had left to Hassan, who proceeded to reference the 990 tax forms. DeVos then made an astonishing claim. These government tax forms, filed by her own mother’s foundation, were incorrect. For years. Many years. “That was a clerical error. I can assure you I have never made decisions on my mother’s behalf on her foundation’s board.”

The idea that her own mother’s foundation would accidentally list her as a vice president for years as result of a clerical error is just not believable. The Democrats should go to town on this obvious attempt to mislead the Senate. This alone should disqualify DeVos, though there is a vast ocean of other reasons they could fish from.

Top photo: Betsy DeVos looks over her papers before her confirmation hearing for secretary of education before the Senate Health, Education, Labor, and Pensions Committee on Capitol Hill in Washington on Jan. 17, 2017.