Some of Donald Trump’s top donors received choice seats on the platform where he took the oath of office on Friday. So far, we’ve spotted seven. 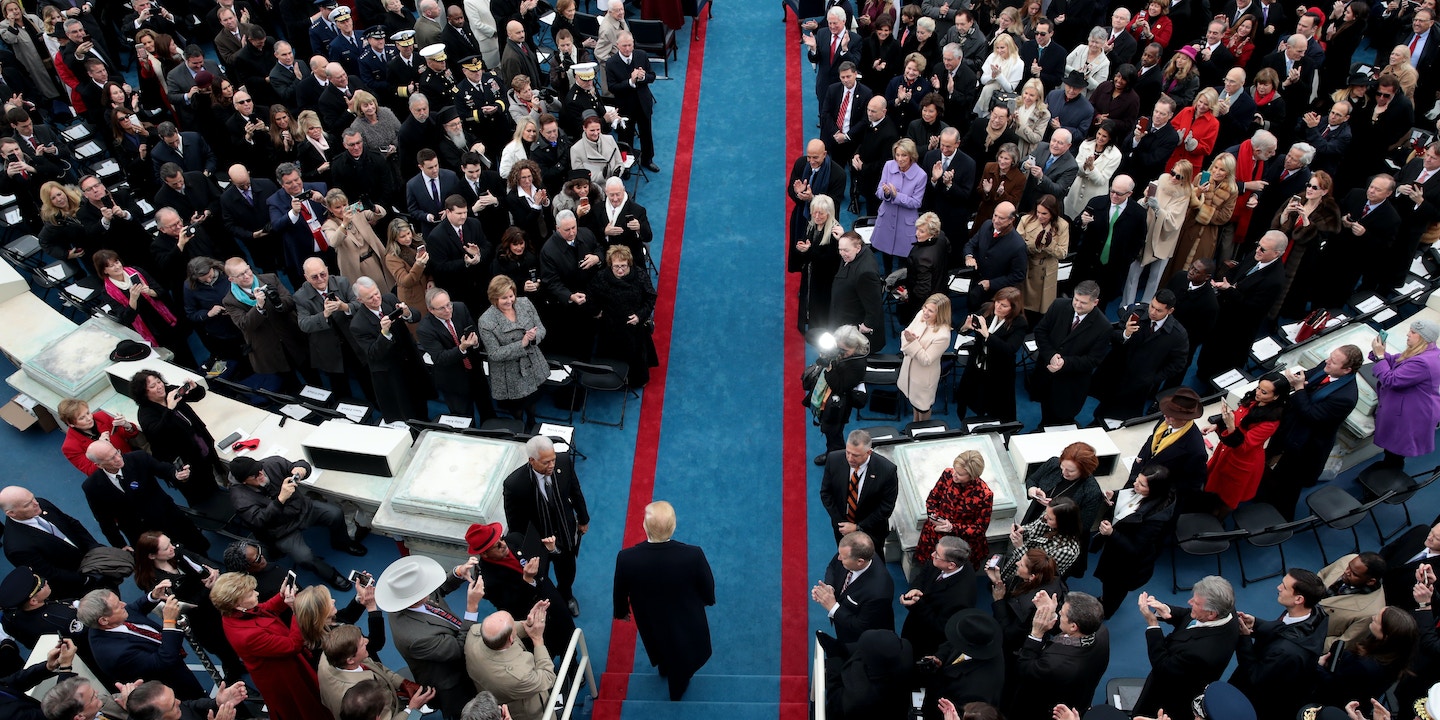 Some of Donald Trump’s top donors received choice seats on the platform where he took the oath of office on Friday. The Intercept exclusively obtained a list revealing that the incoming administration had allocated at least a dozen of 183 seats on the inaugural platform to donors and fundraisers.

Can you help us spot the other donors on the platform? Email us at [email protected] and [email protected], or tweet to us at @Schwartzesque and @lhfang. See the image below, or this one, as well as other images posted online of the inauguration platform, to help us. And check back for updates. Try CNN’s amazing Gigapixel shot, too.

Update: Twitter user Gregory Lomanno spotted Robert Kraft, the owner of the New England Patriots, speaking to Icahn in the picture below. Kraft appeared at an event last week with inauguration donors and other VIPs. And Brandon Bledsoe tweets that Tom Barrack, a private equity executive who chaired the inaugural committee, which has raised over $100 million, according to reports, was given the seat just in front of Adelson. As we reported on Friday, Barrack was granted 49 of 259 seats for the Friday morning service at St. John’s Episcopal Church, about as many seats as were allocated to Vice President Mike Pence and his family. The donors we have already identified used their checkbooks to develop close ties to the Trump administration, either financing his election victory or the inauguration, or both. Adelson, the chief executive of the Las Vegas Sands casino, gave $25 million to Super PACs supporting Trump during the campaign, and joined fellow casino mogul Wynn to help lead the inaugural committee hosting events celebrating Trump’s new administration.

Harold Hamm, the chief executive of Continental Resources, a major drilling firm involved in using hydraulic fracturing (“fracking”) technology, has advised Trump on energy, and fundraised on his behalf.

Lew Eisenberg, a a former Goldman Sachs executive who went on to work in private equity, served as the finance chair of Trump Victory, a joint fundraising effort that solicited checks as big as $449,400 per donor.

Woody Johnson, the owner of the New York Jets who was recently nominated to serve as ambassador to the United Kingdom, was seated near Eisenberg. Johnson donated $349,000 to Trump Victory. Carl Icahn, the billionaire investor, gave $200,000 to Trump Victory. He, too, has won special access to the Trump administration, and is now advising the president on regulatory policy.

And Phil Ruffin, billionaire owner of the Treasure Island Hotel and Casino in Las Vegas, also donated to Trump Victory, giving the fund $400,000. He was joined by his wife, Aleksandra Nikolaenko, a former Miss Ukraine; Trump was the best man at their wedding.

But the still un-identified donors who were on the list were just as important. Hendricks, for instance, a billionaire who co-founded ABC Supply, a roofing and construction materials firm, gave $7.5 million to a SuperPAC that flooded the airwaves in Wisconsin, a state crucial to Trump’s electoral college victory, with advertisements against Hillary Clinton. Joe Craft, the chief executive of Alliance Resource Partners, a major coal firm, gave $750,000 to Future45, another Super PAC that aired that aggressively went after Clinton during the election.