As hundreds of thousands of women crowd the streets of Washington and other cities across the globe on Saturday, The Intercept will be providing updates. Latest update: 5:32 p.m. 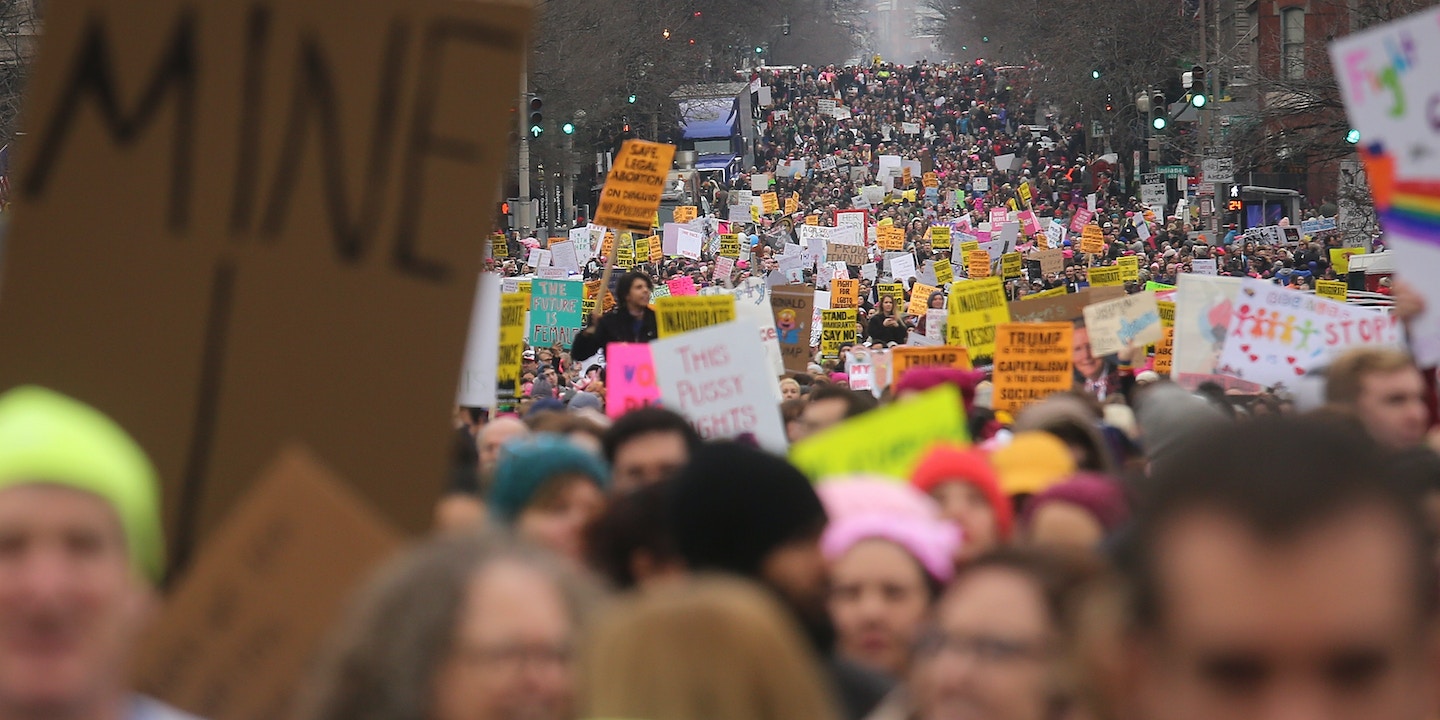 As hundreds of thousands of women and men crowd the streets of Washington and other cities across the globe on Saturday, The Intercept provided updates throughout the day from our reporters on the ground and gleaned from social networks.
Latest update: 5:32 p.m.

As the march in Washington winds down, hundreds of thousands of people remain in the streets on the nation’s largest cities, including massive crowds in New York, where Fifth Avenue remains jammed with people, and Los Angeles, where police estimated that at least 500,000 people took part.

It was a slow start but now taking at least a hour to pass each point on the route - peaceful, determined, united pic.twitter.com/7SYDZDj7GF

An indigenous women's march makes its way down Constitution Ave., to cheers. pic.twitter.com/Z9hH3kfgdx

This is your land! #WomensMarch pic.twitter.com/1GqZgtVDGw

Anger at Trump was not, however, confined to the coasts, or even to the United States, with vivid images and video showing protesters filling the streets of cities across the country and around the world. The Intercept will continue to follow the reverberations of this demonstration of Trump’s deep unpopularity in the days ahead, but here are some final glimpses of a remarkable day.

Large crowd at the Women's March on Oklahoma at the capitol. pic.twitter.com/5dWLaLqEhr

Largest crowd I've ever seen in 33 years in Anchorage and it's 15 degrees and white out conditions. pic.twitter.com/oFvpUIm8JW

An estimated 10,000 rallying against Trump in Lansing, Michigan pic.twitter.com/ZIZXBH24sY

Trump has yet to comment on the fact that the National Mall was more crowded for today’s protest than yesterday’s inauguration, but that could be because he is so irked by reports showing that both of Barack Obama’s inaugural addresses were much better attended.

Sign: "Hey @realdonaldtrump: Our march is bigger than yours" 2nd Ave, Manhattan pic.twitter.com/mHpCnNd13N

The new president took time to address the issue in a bizarre setting: during a speech to intelligence officers at the CIA on Saturday. Trump insisted that he was the victim of a media conspiracy to misreport the crowd size and assured the spies that, from where stood while addressing the crowd, “it looked like a million, a million and a half people,” were there.

President Trump on crowd size at inauguration: “It looked like a million and a half people.” https://t.co/U5pWhBBMzt https://t.co/NX6vI6UTHR

He went on to claim, inaccurately, that the mall was “packed” all the way from the steps of the Capitol to the Washington Monument. One television network “said we drew 250,000 people,” Trump added. “Now, that’s not bad — but it’s a lie.”

In fact, it is a lie to claim that the crowd filled the well-photographed area around the monument, which was packed for Obama’s inauguration in 2009, which drew an estimated 1.8 million people to the mall.

The mall, at the Washington Monument, is empty. A few thousand gathered around a video screen. pic.twitter.com/An0HPJ0ELR

Here is a side-by-side of Obama's 2009 inauguration crowd with today's for Trump https://t.co/Ehll5tYhka pic.twitter.com/6Zf8S3LLjf

Thousands Rally on Steps of Idaho’s Capitol in the Snow

An estimated 5,000 people marched through the snow in Boise, according to the Idaho Statesman.

Nicole LeFavour, a former state senator, shared video of the crowd rallying on the steps of the Capitol building.

Proud today. You all are so beautiful. What a force for good, for strength & justice. #WomensMarch #boise #idaho pic.twitter.com/071aO3ifzx

A few signs at the #Boise #WomensMarch. pic.twitter.com/ffTAPVQa4x

IDAHO IS TOO GREAT FOR HATE! What a blessing it was to be surrounded by all the people who agreed #WomensMarch #Boise pic.twitter.com/Uyb6yIPD82

Tens of thousands of protesters have gathered near Pershing Square in downtown Los Angeles.

Among the marchers sharing views from the ground is David Kaye, the UN Special Rapporteur on freedom of expression.

A woman's place is in the Revolution ???? #womensmarchlosangeles #WomensMarch pic.twitter.com/1PojR9G2sF

Every train in LA packed and headed to #PERSHINGsquare for #womensmarchLA. Over 50k already arrived. Great day for LA. pic.twitter.com/jlqe74MsqM

Blocks in Los Angeles were packed this morning for #womensmarcha pic.twitter.com/9ONMfnRIxs

Marchers Fill the Streets of Washington

The march in Washington is now on its way to the park outside the White House known as the Ellipse.

Here’s video from Veit Medick, a Washington correspondent for the German magazine Spiegel.

At the corner of 57th and 5th #womensmarch pic.twitter.com/fEExHpQDJI

At the corner of 56th and Park I see a woman in tears and ask if she's okay. "Yea it's just so beautiful, y'all marching..." #womensmarch

Marchers Draw Attention to Other Targets of Trump’s Wrath

While Trump’s potential impact on women’s rights is the main focus of the rallies on Saturday, marchers are also drawing attention to the threat he poses to other groups, including disabled, LGBTQ, and undocumented Americans.

The signs are not subtle. #WomensMarchOnWashington pic.twitter.com/pZ7SommrgX

Erika Andiola, an undocumented Mexican-American and former press secretary for Bernie Sanders, was a featured speaker at the rally in Washington.

My dear friend @erikaandiola is slated to be one of last speakers of #WomensMarch. Send her good vibes! @DefineAmerican https://t.co/biGTxDWGM6

The rally was also addressed by Sophie Cruz, a 6-year-old from Los Angeles whose parents are undocumented Mexican immigrants.

The @WomensMarch fights with love! Sophie Cruz and her family are #HereToStay. Watch her whole speech at https://t.co/7VfL5Zz1MT. pic.twitter.com/jYGlKlWapg

Sophie drew international attention to the plight of her parents in 2015, when she handed Pope Francis a letter asking for his help in getting Congress to pass immigration reform during his visit to Washington.

Crowd sizes are notoriously difficult to estimate accurately, but there’s evidence that the protest in Washington on Saturday has been attended by far more people than Trump’s inauguration a day earlier.

This is massive. #WomensMarch pic.twitter.com/ziADBHdAOW

Hundreds of thousands flood the national mall for #WomensMarch. This is just part of the crowd. #WomensMarchOnWashington #VOAalert pic.twitter.com/7HNKI0d3Vk

CNN has a side-by-side comparison of what the National Mall looked like at 12:15 p.m. yesterday, as Trump delivered his baneful inaugural address, and at the same time today from a live webcam trained on the park.

The city’s transit authority, which noted that the number of riders on Friday was far lower than it had been for either of Barack Obama’s two inaugurals, reported on Saturday that ridership had spiked again.

Metro Ridership as of 11am: 275k. For comparison, that's more than 8x a normal Sat & even busier than most weekdays. #wmata #womensmarch

Hey @POTUS... THIS is what a populist movement looks like. pic.twitter.com/ykHOoJaFPQ

Numbers in Chicago Overwhelm the Authorities

The turnout in Chicago has been so large that it overwhelmed the city’s ability to police a march. The organizers agreed to transform the gathering into a static rally, according to a police spokesman, Anthony Guglielmi.

#BREAKING: #WomensMarchCHI organizers say streets are so flooded they cannot march. Sky5 is live over the scene: https://t.co/kSfjePu37v pic.twitter.com/rtRd5ZLOhl

Zach Stafford of the Guardian reports that thousands of participants are now marching toward the city’s Trump Tower anyway.

While the organizers have said the march is canceled...rogue participants have decided to march anyway. #WomensMarchChi pic.twitter.com/dQOwbPwFu2

"To the Tower!" some are yelling, referring to President Trumps Chicago building.

Thousands have left #WomensMarchChi rally and unofficially marched onto Trump Tower now as the city moves to control the change of plans.

Senator Kamala Harris just addressed the rally in Washington, standing alongside other female leaders of the Democratic party, including Congresswoman Debbie Wasserman Schultz.

Sen. Kamala Harris speaks at the #WomensMarch: "We, the people, have the power" https://t.co/ILbbPxHdqO https://t.co/5zpCzqKO3A

Hillary Clinton’s name was on many lips, but she elected not to attend the march, electing instead to express her support on Twitter.

Gloria Steinem: "Hillary Clinton is alive! And definitely not in jail!" #WomensMarch

Thanks for standing, speaking & marching for our values @womensmarch. Important as ever. I truly believe we're always Stronger Together.

Clinton’s successor as secretary of state, John Kerry, was spotted in Washington.

The #WomensMarch in downtown St. Louis! This is what democracy looks like. pic.twitter.com/mzb5xMZUKC

From Interceptors in Washington and New York

We climbed scaffolding left over from the inauguration together and found a lot more people than yesterday. #WomensMarch pic.twitter.com/afWCFsmw9b

This is a small fraction of the women at #WomensMarch: pic.twitter.com/naBDlAUpw7

Elizabeth Warren in Boston: We can whimper, whine, or we can fight back. https://t.co/OQYMagb5wX #WomensMarch https://t.co/xW3TQ8avoT

An Interview With Naomi Klein

My colleague Jeremy Scahill just interviewed Naomi Klein on our Facebook live stream, near the site of the Women’s March on Washington.

Here’s a live stream of the event in Washington from the Guardian, including speeches from the main rallying point:

Crowds Assemble Across the World

More women and men! #WomensMarch we the people pic.twitter.com/x4HTpMbWL0

#WomensMarch in #DC view from the roof of VOA towards #USCapitol pic.twitter.com/JBY4MAhep3

March for women in #Berlin. "Respect instead of Lies" #WhyIMarch pic.twitter.com/NrYUawAdR2

The signs are ???? #WomensMarch pic.twitter.com/1E6mNJ3pIx

Around 5000 marching in the rather cold and foggy Copenhagen streets. #WomensMarch #Copenhagen pic.twitter.com/B1ljnIIztD

This woman singing "we shall overcome" just gave me so much life. #WomensMarch pic.twitter.com/cdscerBNvQ

Proud to support women's rights with the whole fam in ????????#womensmarchlondon pic.twitter.com/fzTtnIA4LP

Activists in Kolkata demonstrate in solidarity with the #WomensMarchOnWashington opposing Trump's presidency. pic.twitter.com/WVqDIS6rIc

We're marching in the city of brotherly love for justice and equality. #WomensMarch #Philly pic.twitter.com/w4vUX7ZANc

Standing with our fellow North Carolinians at #WomensMarch in Raleigh pic.twitter.com/1Ay0qp1Vku

So proud & excited to march today. Great to run into these women from Eugene!

Let's do this! #WomensMarch pic.twitter.com/RcjWT4GaUG

Top photo:Protesters attend the Women’s March on Washington on Jan. 21, 2017 in Washington.