Both the White House and Fox News helped to spread these false claims, and still have not retracted them. A mass shooting at a Quebec City mosque last night left six people dead and eight wounded. The targeted mosque, the Cultural Islamic Center of Quebec, was the same one at which a severed pig’s head was left during Ramadan last June. Canadian Prime Minister Justin Trudeau called the episode a “terrorist attack on Muslims.”

Almost immediately, various news outlets and political figures depicted the shooter as Muslim. Right-wing nationalist tabloids in the U.K. instantly linked it to Islamic violence. Fox News claimed that “witnesses said at least one gunman shouted ‘Allahu akbar!’” and then added this about the shooter’s national origin:

White House press secretary Sean Spicer exploited the attack to justify President Trump’s ban on immigrants from seven Muslim-majority countries. “It’s a terrible reminder of why we must remain vigilant and why the president is taking steps to be proactive rather than reactive when it comes to our nation’s safety and security,” Spicer said at this afternoon’s briefing when speaking of the Quebec City attack.

But these assertions are utterly false. The suspect is neither Moroccan nor Muslim. The Moroccan individual, Mohamed Belkhadir, was actually one of the worshippers at the mosque and called 911 to summon the police, playing no role whatsoever in the shooting.

The actual shooting suspect is 27-year-old Alexandre Bissonnette, a white French Canadian who is, by all appearances, a rabid anti-immigrant nationalist. A leader of a local immigration rights group, François Deschamps, told a local paper he recognized his photo as an anti-immigrant far-right “troll” who has been hostile to the group online.

The Globe and Mail added that he “was known in the city’s activist circles as a right-wing troll who frequently took anti-foreigner and anti-feminist positions and stood up for U.S. President Donald Trump.” And Bissonnette’s Facebook page — now taken down but still archived — lists among its “likes” the far-right French nationalist Marine Le Pen, Islam critics Richard Dawkins and Christopher Hitchens, the Israeli Defense Forces, and Donald J. Trump (he also “likes” the liberal Canadian Party NDP along with more neutral “likes” such as Tom Hanks, the Sopranos, and Katy Perry).

It is usually the case that there is significant confusion in the wake of attacks of this sort. And local police did apparently arrest two suspects at first: Bissonnette along with Belkhadir. And until the investigation is complete, one cannot know for certain what the motives here were. One should be careful about trying to infer too much from a hodgepodge of Facebook “likes” and, this early, even anecdotal claims about Bissonnette’s political views. As for reports that someone yelled “Allahu akbar,” it is perfectly natural that someone in a mosque would say that upon seeing a homicidal killer randomly shooting people, or it’s possible that the shooter said it mockingly.

But this is exactly why no responsible news organization, let alone the White House, should rush to depict the shooter as Muslim and of Moroccan descent when so little is known about what happened. Yet not only did Fox and the Trump White House do exactly that, but worse, neither has retracted or corrected their claims long after it became clear that they were false:

Hour & a half after tweeting out false info on #QuebecMosqueAttack Fox News has still not corrected or retracted. @ggreenwald https://t.co/IppNZrXxHH

The inflammatory effect of this sort of reckless, biased “reporting” is as predictable as it is toxic. All day long, people around the world cited these reports to justify Trump’s ban as well as their own ugly views of Muslims: 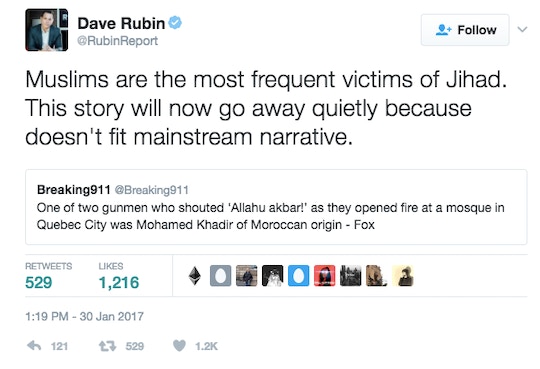 I fully condemn the shooting in Quebec City. But remember the shooters weren't yelling "Trump" they were yelling "Allahu akbar"
#MsuslimBan

The only part of any of this that’s true is that it was an act of terrorism: terrorism aimed, yet again, at Muslims by someone who has apparently been indoctrinated with a great deal of hate toward them. Media outlets and the White House led people all over the world today to believe exactly the opposite.

Top photo: Police survey the scene after a deadly shooting at a mosque in Quebec City, Canada, Jan. 29, 2017.