As part of his purchase, the new adviser to Trump’s “America First” administration swore an oath to Queen Elizabeth. 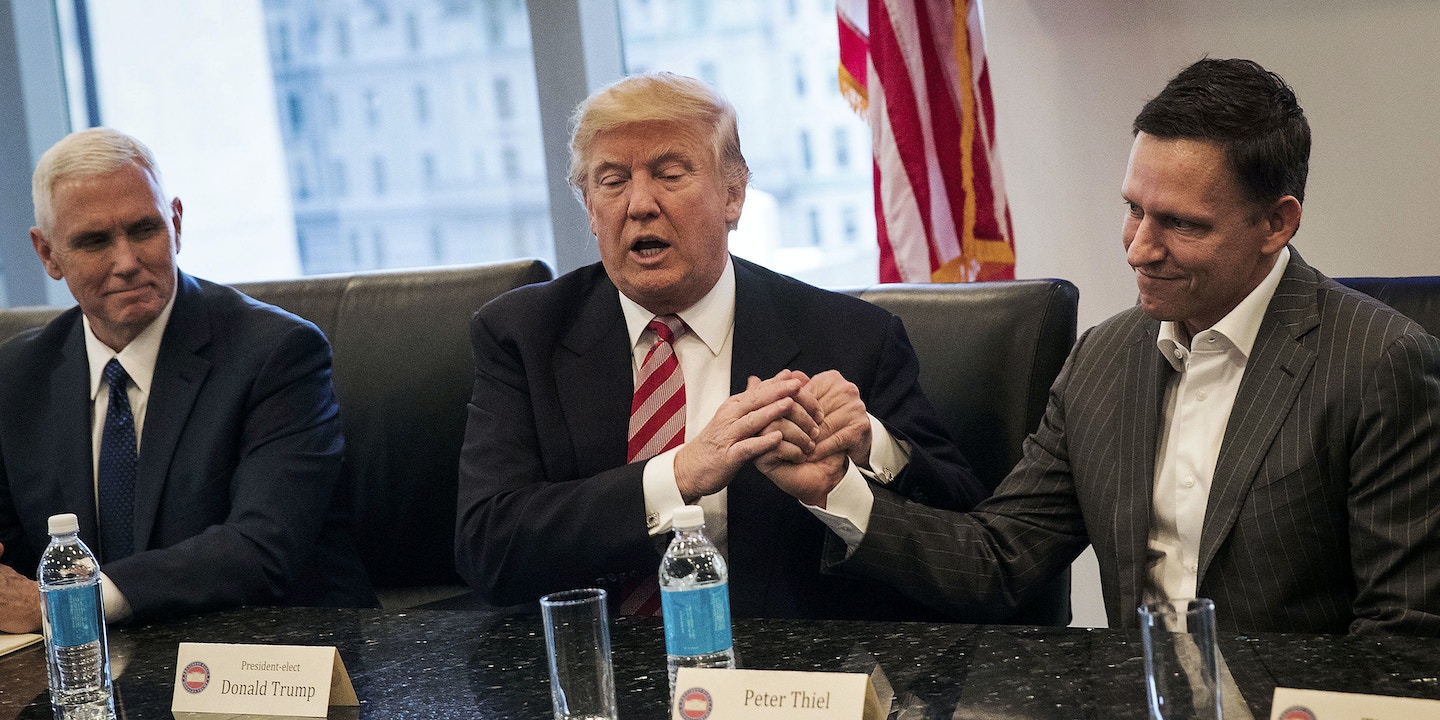 In 2011, before Peter Thiel became a household name for his covert campaign against a free press or his loud support for Donald Trump, he was engaged in another covert plan: secretly securing citizenship in New Zealand, where according to a recent New Yorker article, he hopes to safely ride out the apocalypse. As part of his purchase, the new adviser to Trump’s “America First” administration swore an oath to Queen Elizabeth.

A 145-page set of documents released by the New Zealand government in the wake of public outrage in that country shows that Thiel would have been denied citizenship on the self-admitted fact that he has never lived in the country and has no plans to do so: However, under a provision of a 1977 law, New Zealand grants citizenship under “exceptional circumstances and public interest” for persons who don’t live or plan to live in the country: “Since 2012, there have been 632 applications where the Minister has been specifically asked to consider Section 9(1)(c); of these 92 have been approved by the Minister as decision-maker.”

In Thiel’s case, the exceptional circumstances were that he is immensely rich, with powerful ties to Silicon Valley. His application states:

The memo continues with a strictly business-based justification for Thiel’s citizenship:

In New Zealand he has established a venture capital fund to fund innovative companies. To date he has invested [REDACTED] into an online accounting business ‘Xero’ and made a [REDACTED] investment in Pacific Fibre Limited. … Mr. Thiel has discussed the establishment of a technology company incubator in Auckland and using his connections in San Francisco to help introduce New Zealand companies to the U.S. … Mr Thiel has demonstrated his philanthropy through making a million dollar donation to the Christchurch earthquake relief fund.

Mr Thiel wishes to be granted citizenship from both a personal and professional perspective. Mr Thiel’s entrepreneurial skills are what make him exceptional and this claim is supported by the success he has had in business. … Mr Thiel states that being a New Zealand citizen would enable him to represent the country on the international stage and give him greater confidence in mobilising New Zealand’s talented entrepreneurs.

In his personal statement, Thiel was also sure to point out, as evidence of his philanthropy, “that I am a primary supporter of the Committee to Protect Journalists, an independent, non-profit group that promotes press freedom worldwide by defending the rights of journalists to report news without fear of reprisals.” Just one year after typing those words, a legal campaign of fear and reprisal against the journalists and writers of the now-defunct Gawker Media began, years later revealed to have been bankrolled by Thiel (in full disclosure, I previously worked at Gawker Media during that time).

On this basis, along with a few letters from members of the New Zealand business community (including a recipient of his money), the government recommended his application be approved on the strength of his business acumen, which it was in 2011. PayPal co-founder Peter Thiel speaks during the Republican National Convention at the Quicken Loans Arena in Cleveland, Ohio, on July 21, 2016.

This last point, that Thiel would act as an international steward of high-tech industry between New Zealand and Silicon Valley, is perhaps undercut by the fact that Thiel kept his citizenship secret for half a decade. It also creates a tension given his newfound (but technically informal) role in the Trump administration, where he has acted as a bridge to Silicon Valley — but to Washington, not Auckland. Thiel has not only generously funded the president’s campaign and opened for him at the Republican National Convention, but now provides economic policy advice to the White House (and helped organize a farcical meeting of tech CEOs at Trump Tower).

But his devotion to an administration whose rallying cry is “America First!” now seems suspect, because according to the citizenship documents Thiel was administered a citizenship oath in Santa Monica on August 12, 2011. At this ceremony, he was required to swear (upon a Bible) loyalty to Queen Elizabeth II, the British monarch. According to the New Zealand Citizenship Act of 1977, the oath is as follows:

So help me God. Thiel’s current devotion to “Make America Great Again” seems to conflict not only with his pledge of allegiance to Queen Elizabeth, but also with another portion of his personal statement: “I am happy to say categorically that I have found no other country that aligns more with my vision of the future than New Zealand.” Perhaps that vision of the future was one in which, sometime in the next four to eight years, an apocalyptic disaster has spread across the globe, and he and his fellow billionaires safely reside in armored bunkers. America First, indeed.

The Thiel Foundation did not reply to request for comment in time for publication.