Trump’s order enabling financial advisers to continue ripping off their clients is just what the private equity industry needs. 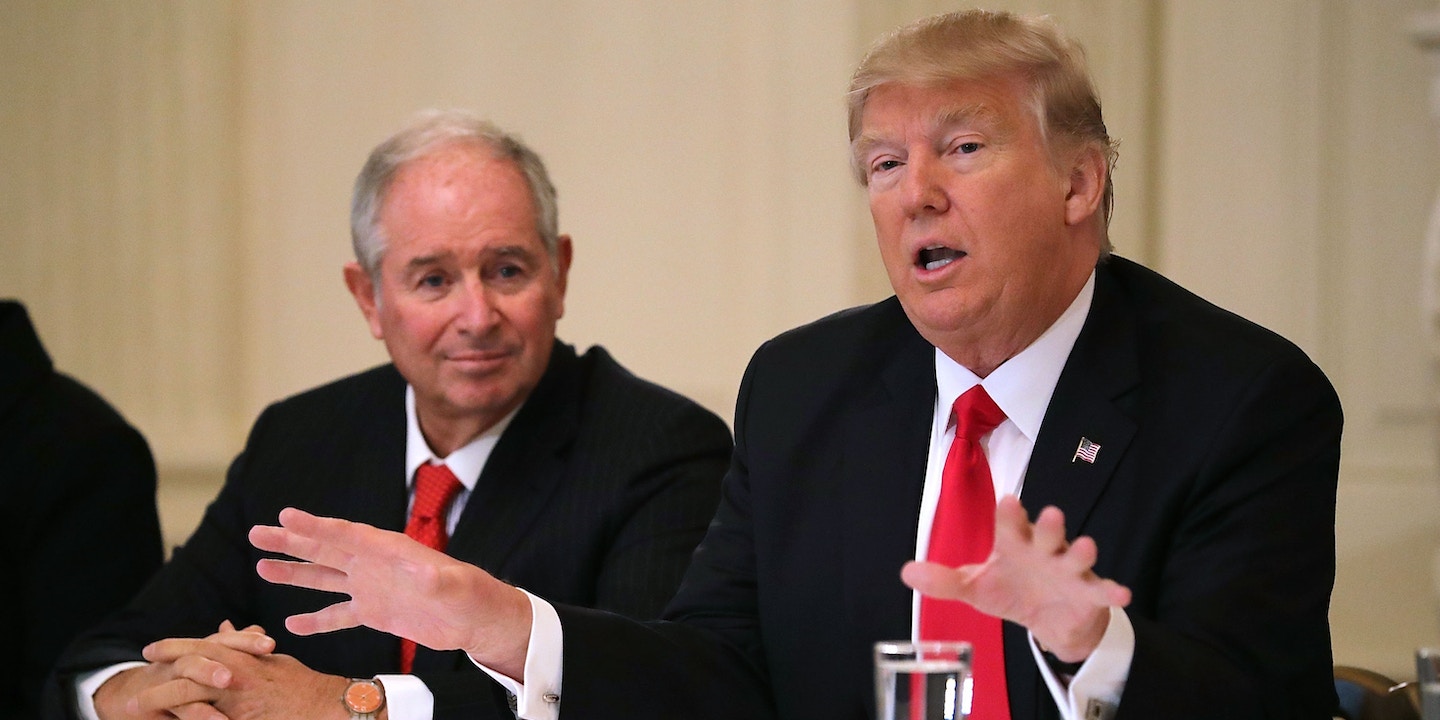 Donald Trump’s February 3 executive order enabling financial advisers to continue ripping off their clients could prove a lifeline for a surprising beneficiary: the private equity industry.

The Department of Labor’s fiduciary rule would have forced investment advisers in workplace retirement plans like 401(k)s to operate in their clients’ best interests, rather than recommending high-cost, high-risk products that offer the advisers kickbacks and perks.

The Obama White House estimated in a 2015 report that conflicts of interest cost retirement savers $17 billion annually, though that figure has been challenged.

The fiduciary rule, finalized last year, was to go into effect in April. But the new order directs the Labor Department to review the rule, which is expected to initiate the process of rescinding it.

As Gary Cohn, former Goldman Sachs president and director of the National Economic Council, put it, the fiduciary rule “is like putting only healthy food on the menu, because unhealthy food tastes good but you still shouldn’t eat it because you might die younger.”

Why Trump thinks individual workers must have the freedom to choose poison for their retirement funds is unclear. But one reason could be that his friends in private equity have long sought to add their particular form of junk food to that menu.

And to break into the 401(k) market — especially with financial products that are high-risk, high-cost, and often make their money from ripping established companies apart and selling the pieces — private equity funds would need a lot of help from the advisers who guide ordinary investors in the process. And that would require the ability to offer those advisers considerable perks and kickbacks.

On the same day that he issued his fiduciary rule executive order, Trump met with his White House jobs panel, headed by Steven Schwarzman, CEO of the world’s largest private equity firm, Blackstone.

“We’re getting rid of your regulations,” Trump told Schwarzman and his colleagues on Friday.

Late last month, Schwarzman stressed his craving for Blackstone to get into the 401(k) market. “In life you have to have a dream,” Schwarzman said on an analyst call, “and one of our dreams is our desire and the market’s need to have more access at retail to alternative asset products.”

Traditional pension funds invest heavily in private equity; this makes up about one-quarter of total private equity capital. But defined contribution plans like 401(k)s have traditionally not invested in the asset class. Because 401(k) holders choose how to invest their money and can move in and out of funds quickly, they don’t fit mechanically with private equity, which locks in investors over several years. Also, private equity usually asks for large minimum investments, not less than $5 million, to open their funds to investors.

But with pension plans now a rarity compared to defined contributions retirement plans, private equity wants to crack the 401(k) market to unlock trillions of dollars in potential capital. Americans hold $6.8 trillion in individual retirement plans like 401(k)s. The Wall Street Journal describes this as “something of a Holy Grail quest” for the industry.

Large firms like Carlyle, Blackstone, Partners Group, and Kohlberg Kravitz Roberts (KKR) have developed a series of 401(k)-friendly products over the past couple years. Most enable plan advisers to offer private equity stakes to investors as part of a “target fund,” in a diversified portfolio with other investments. “That’s where we believe private equity should go,” said Kevin Albert, global head of business development for Pantheon Ventures, on a Wall Street Journal podcast.

If plan advisers take this up, it would flood more money into private equity. “Five percent of the estimated $6.8 trillion and growing in 401(k)s is $340 billion — a nice chunk of change,” said Eileen Applebaum, senior economist at the Center for Economic and Policy Research and author of Private Equity at Work.

But these investments are far riskier than most 401(k) offerings. Contrary to popular belief, private equity firms do not outperform the market. Fees are also often opaque and much larger than those in passive funds, usually extracting 1 to 2 percent of the total capital invested and 20 percent of the profits. A 2014 SEC study found that over half of the private equity firms examined shifted costs to benefit themselves, like billing investors for legal and compliance costs without their knowledge, or forcing investors to pay for “consultants” who are actually former employees of the companies. Giant fees guarantee private equity profits regardless of the performance of their portfolio.

Last week, Pantheon introduced a new performance-based offering to plan advisers, with Pantheon only benefiting if they outperform the benchmark S&P 500. Albert claimed this would relieve the threat of class-action lawsuits over high fees. Pantheon will also partner with KKR and other firms to ensure they have sufficient funds to invest in companies, regardless of whether 401(k) investors pull their money out on a moment’s notice.

But private equity has been accused of deliberately reporting exaggerated returns to harvest fees. And even if the returns were legitimate, this would still throw millions of retirement dollars into an industry that has been sharply criticized for its predatory version of capitalism.

Private equity firms buy out companies and load them with unsustainable debt, forcing severe cost-cutting to maintain survival. Because private equity serves as manager and investor, they favor short-term gain over a company’s health, whether through using bankruptcy, favorable tax strategies, or monetizing assets. Workers often get left behind, with lower wages, lost jobs, or restructured union contracts.

The destruction of the Mervyn’s department store chain provides a salient example. Once a major retailer with 30,000 employees, Mervyn’s was bought out in 2004 by a consortium of private equity firms, who split off the company’s real estate assets and forced stores to pay exorbitant rent to service $800 million in debt. Within four years, Mervyn’s liquidated the entire operation in bankruptcy. The private equity managers, however, earned profits through the real estate deals and came out ahead.

Individual investors would therefore be using retirement dollars to fund an industry that terrorizes workers and sucks value from their employers.

How does sidelining the fiduciary rule facilitate this? Plan advisers would not be required to act in the best interest of their clients when promoting target funds, enabling them to include private equity, regardless of the fee structure or threat of losses.

“It could put retirement income at risk and may be more costly than the individual investor recognizes,” said Eileen Applebaum. “The financial adviser will know, but they’re now under no obligation to divulge.”

Advisers could also receive hidden kickbacks for including these investments in the target funds. There’s already a large cottage industry of perks for financial advisers, most of them obscure to individual 401(k) subscribers. Few would be able to outbid wealthy private equity firms for the privilege of peddling complex financial products to ordinary investors.

According to a study from researchers at Indiana University, the University of Texas and the Federal Reserve last October, plan advisers routinely present limited choices to 401(k) investors, to steer them into unnecessary or risky options. This favoritism benefits affiliated funds, and with private equity perks in the waiting, advisers would have yet another incentive to tout their products.