Donald Trump’s first concrete decision as commander in chief was a major fiasco that killed nine children, eight women, and a U.S. soldier in a botched raid on al Qaeda in Yemen.

The operation — which Trump reportedly approved over dinner — also failed to catch its reported target and severely damaged a local clinic, mosque, and school.

Impoverished to begin with, Yemen is two years into a civil war that has killed 10,000 people and displaced millions. A U.S.-supplied bombing campaign has turned schools, hospitals, essential infrastructure, and ancient heritage sites into rubble. And a U.S.-backed blockade is preventing the trade of food and basic goods, starving a country that previously relied on imports for 90 percent of its food. 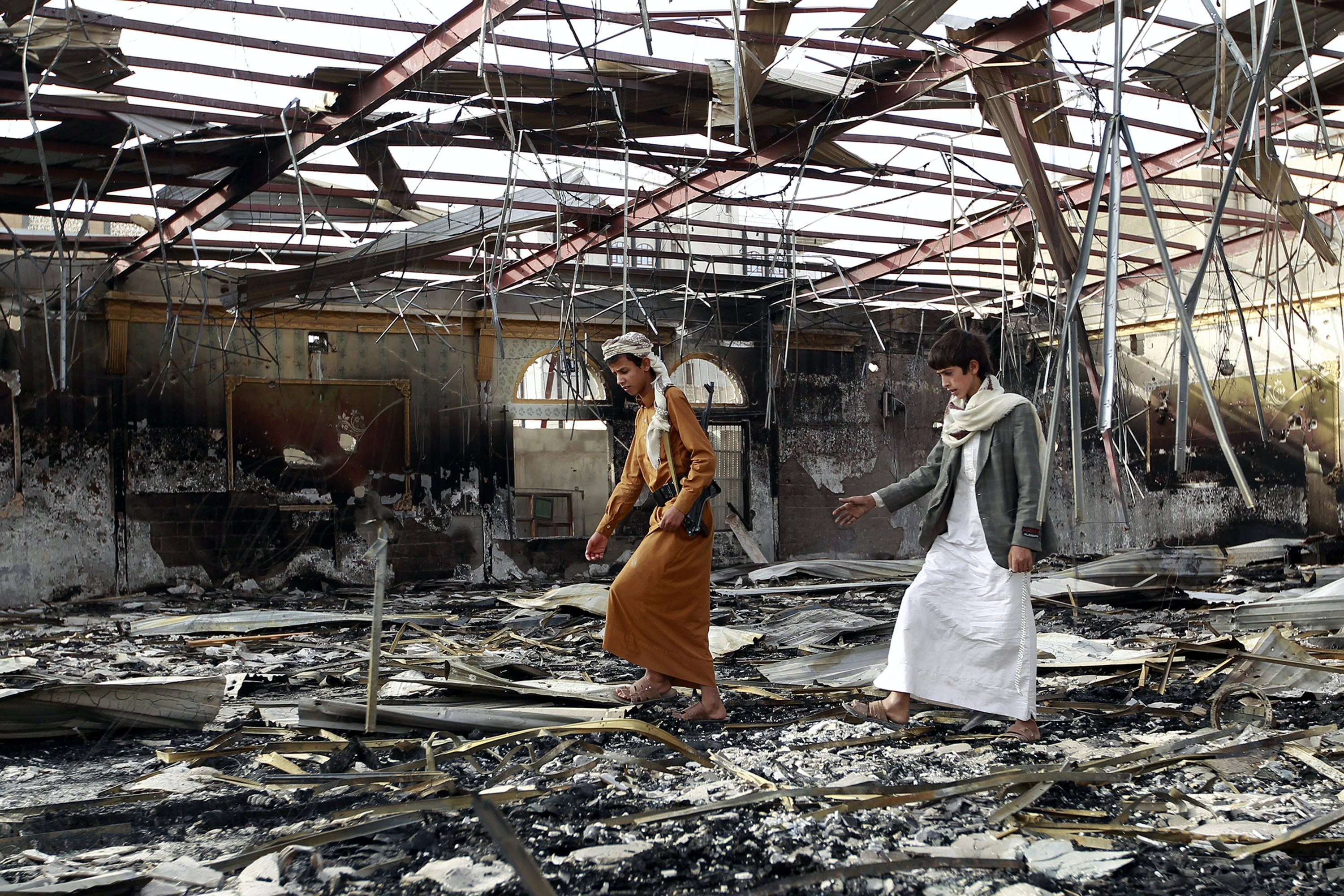 Armed Yemenis walk on the debris at a wedding hall reportedly hit by a Saudi-led coalition air strike in the capital Sanaa on July 10, 2015.

As a result, the United Nations this week declared that Yemen is on the brink of famine. Officials held a news conference Wednesday to announce that 19 million Yemenis — more than two-thirds of the country’s population — need some form of humanitarian assistance, 7.3 million people do not know where their next meal will come, and more than half of the country’s medical facilities have closed.

Jan Egeland, a former UN official and chair of the Norwegian Refugee Council, described the situation by saying “if bombs don’t kill you, a slow and painful death by starvation is now an increasing threat.”

Even so, the toll of Trump’s botched raid was so high that it drew criticism from the ousted government-in-exile of Abd Rabbu Mansour Hadi — the party supported by the U.S. and Saudi Arabia in Yemen’s civil war. The New York Times reported Tuesday that Hadi’s ministers had withdrawn their support for the U.S. to conduct ground missions in Yemen. The Pentagon and the Hadi government quickly denied the report, but Hadi’s foreign minister then said the government is conducting a “reassessment” of the raid.

Trump is evidently so sensitive to the criticism that he has tried to smother it by shamefully smearing critics and trying to stifle dissent.

White House Press Secretary Sean Spicer accused critics of being disrespectful of Chief Special Warfare Operator William “Ryan” Owens, the Navy SEAL Trump sent to his death. “I think anybody who undermines the success of that raid owes an apology and does a disservice to the life of Chief Owens,” Spicer said.

On Thursday, after Sen. John McCain, R.-Ariz., described the raid as “a failure,” Trump — who repeatedly insisted it was a success — lashed out on Twitter, saying McCain’s criticism “emboldens the enemy” — likening congressional truth-telling to sedition.

And signs are that Yemen is in for more suffering at Trump’s hands. Trump’s Defense Department is reportedly considering a proposal to designate Yemen a formal battlefield in the war on terror, which would allow for an “intensified pace of operations, rather than one-off raids or drone strikes.”

Yemen is one of seven countries included in Trump’s immigration ban. In New York City, Yemeni-Americans have led strikes and large protests against the ban, which separates many from their extended families.

And the Washington Times reported on Wednesday that the administration is set to approve an arms transfer to Saudi Arabia that the Obama administration denied to them on human rights grounds.

The shipment contains hundreds of millions of dollars worth of weapons guidance systems that would allow Saudi Arabia to convert dumb bombs into precision missiles. 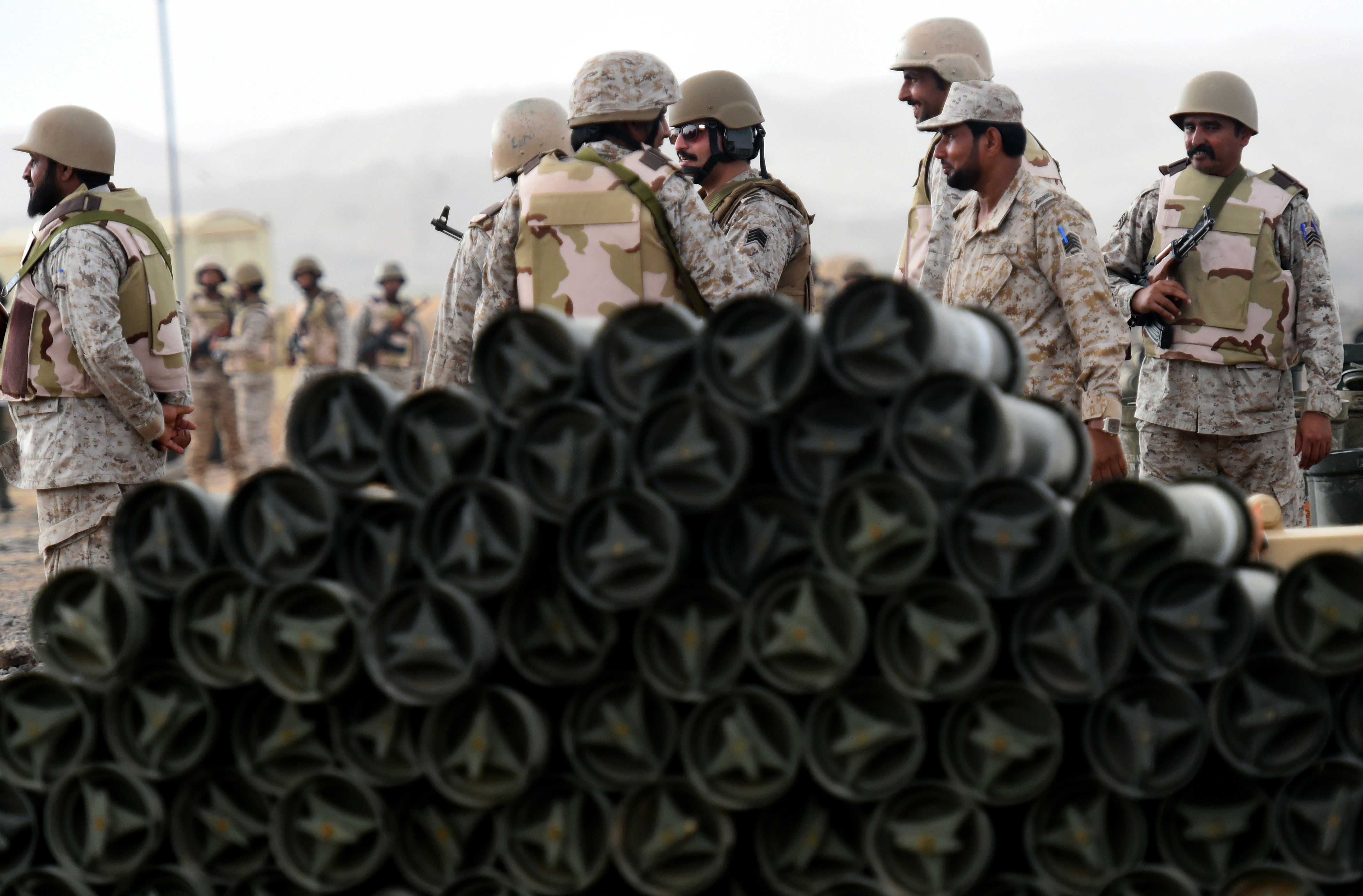 Saudi soldiers from an artillery unit stand behind a pile of ammunition at a position close to the Saudi-Yemeni border, in southwestern Saudi Arabia, on April 13, 2015.

Targeted bombing is normally safer for civilians than indiscriminate bombing. In fact, Secretary of State Rex Tillerson said during his confirmation hearing that the U.S. should provide Saudi Arabia with “better targeting intelligence” and “better targeting capability” in order to minimize “collateral damage.”

But the Obama administration, despite its reluctance to offend the Saudis, halted the guidance-systems sales after concluding that the Saudi-led coalition was targeting civilians deliberately.

Saudi Arabia began bombing Yemen in March 2015 after Houthi rebels overran the capital and deposed Hadi, the Saudi-backed leader, who now splits his time between the Saudi capital and southern Yemen.  The U.S. has been a silent partner in the kingdom’s campaign against the Houthis, refueling warplanes, supplying targeting intelligence, and resupplying the coalition with more than $20 billion in weapons.

Since the beginning of their campaign, Saudi Arabia has destroyed vital civilian infrastructure including farms, fisheries, water infrastructure, roads, and hospitals. Other targeting decisions have sparked global outrage: the bombing of a children’s school and a school for the blind, and the October attack that turned a funeral at a community center into a “lake of blood.”

Congress has not yet been notified of the weapons shipment, and the Pentagon declined to comment on it.

The Saudi-led bombing campaign has also allowed al Qaeda’s Yemen affiliate — the target of Trump’s botched raid — to grow exponentially in personnel and finances. According to State Department reports, the group quadrupled in size the year that Saudi Arabia started bombing. The same year, al Qaeda seized a prominent port city, which netted them an estimated $5 million a day off customs tariffs and smuggled goods. Al Qaeda in Yemen is also fighting the Houthis.

While Trump ramps up U.S. militarism in Yemen, Democrats have largely ignored the plight of the Yemenis. When a Yemeni refugee who had lost her father to Saudi bombing questioned Nancy Pelosi at a CNN town hall on January 31, Pelosi condemned Trump’s Muslim travel ban — but said nothing about U.S. support for Saudi Arabia’s war. “Your family is suffering because our president is reckless” she said.

Pelosi to Yemeni refugee: "Your family is suffering because our president is reckless" https://t.co/qzremhe9fS https://t.co/UMhQJr7Ua2

Top Photo: A Yemeni man walks past flames rising from the ruins of buildings destroyed in a Saudi-led airstrike on Feb. 10, 2016 in Sanaa.