As Tensions Rise, Steve Bannon and ISIS Get Closer to Their Common Goal: Civilizational War

There are striking parallels between Bannon’s worldview and the perspective of terrorist groups like the Islamic State, which see the world divided in similarly binary terms. 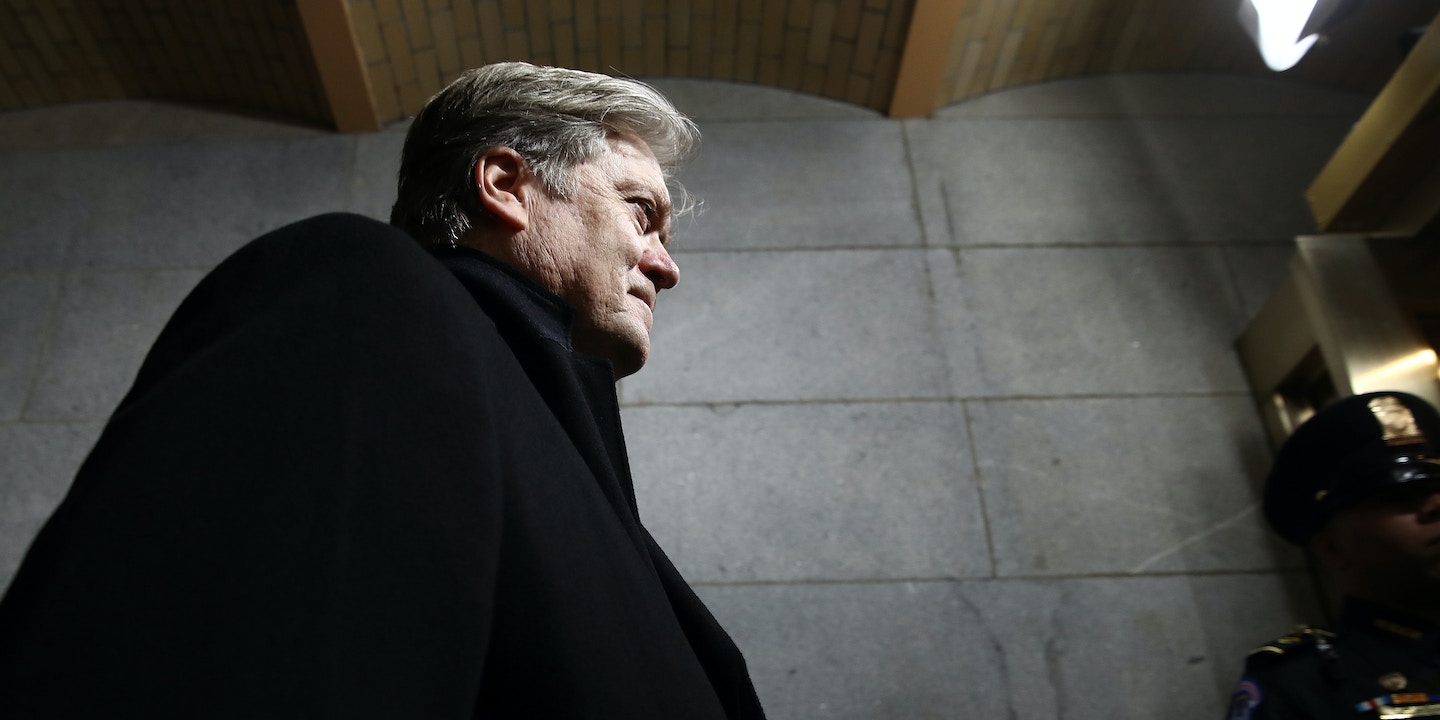 The Trump administration has taken sweeping, drastic measures that it says are necessary to protect Americans from the threat of terrorism, including its executive order halting immigration from seven Muslim-majority countries. But the radical policies and beliefs of this administration could just as easily end up fueling the narratives of extremist groups fighting the United States. When Trump ran a campaign built on promises to destroy ISIS, how can one explain the fact that supporters of the group in Mosul were reportedly celebrating his Muslim ban?

The order was based on plainly dubious claims about national security, targeting for scrutiny some of the most heavily vetted visitors to the United States. But the tangible purpose it did serve, before being at least temporarily frozen by the courts, was to divide Americans from millions of people in the Muslim world by sending the latter a message of gratuitous insult and contempt — and emboldening the very extremist movements the order was ostensibly directed against.

That kind of polarization may be exactly what some members of the White House want. High-ranking members of the current administration — most notably its chief strategist, Steve Bannon — have publicly espoused apocalyptic theories of history that center on a forthcoming clash between Western countries and the Muslim world, a conflict that many of them seem to perceive as both inevitable and desirable.

There are striking parallels between Bannon’s worldview and the perspective of terrorist groups like the Islamic State, which see the world divided in similarly binary terms — hence their reported enthusiasm for the executive order that Bannon helped author.

A proponent of pseudoscientific theories of history like the “Fourth Turning,” Bannon has predicted the coming of another major U.S. war in the Middle East and a military conflict with what he calls an “expansionist China.” In interviews during the election campaign, Bannon openly described Trump as a “blunt instrument” for his ideological goals.

A 2014 speech that Bannon delivered to an audience at the Vatican provides a hint of what kind of program he might want to use Trump to achieve. In that address, delivered via teleconference, Bannon called for a revival of the tradition of the “church militant,” describing a vague yet apocalyptic threat he claims that Western countries face from both “Islamic jihadist fascism” and their own loss of religious faith.

We’re at the very beginning stages of a very brutal and bloody conflict … to fight for our beliefs against this new barbarity that’s starting, that will completely eradicate everything that we’ve been bequeathed over the last 2,000, 2,500 years.

Now consider how Bannon’s hysterical view of history was echoed that same year in a speech by Islamic State leader Abu Bakr al-Baghdadi, who issued a similarly vague, yet no less frenzied call to arms:

So let the world know that we are living today in a new era. Whoever was heedless must now be alert. Whoever was sleeping must now awaken. … You will face tribulation and fierce battle. … So prepare your arms, and supply yourselves with piety.

Nowhere are these types of ideas particularly popular. While the Islamic State is held up by anti-Muslim activists in the United States as the quintessential expression of Muslim beliefs, in reality the group is deeply loathed in Muslim-majority countries. In the United States, though Trump won the election, his voter base comprised a distinct minority of the electorate. Even among those who did vote for him, few appear to have done so in enthusiasm for the apocalyptic theories of history held by advisers like Bannon. Huge numbers of people have also taken to the streets in opposition to Trump’s executive orders, which has helped to counteract the administration’s anti-Muslim message to the world, showing that it does not represent the views of all Americans.

But it doesn’t take much for a highly motivated minority to spark a broader conflict. 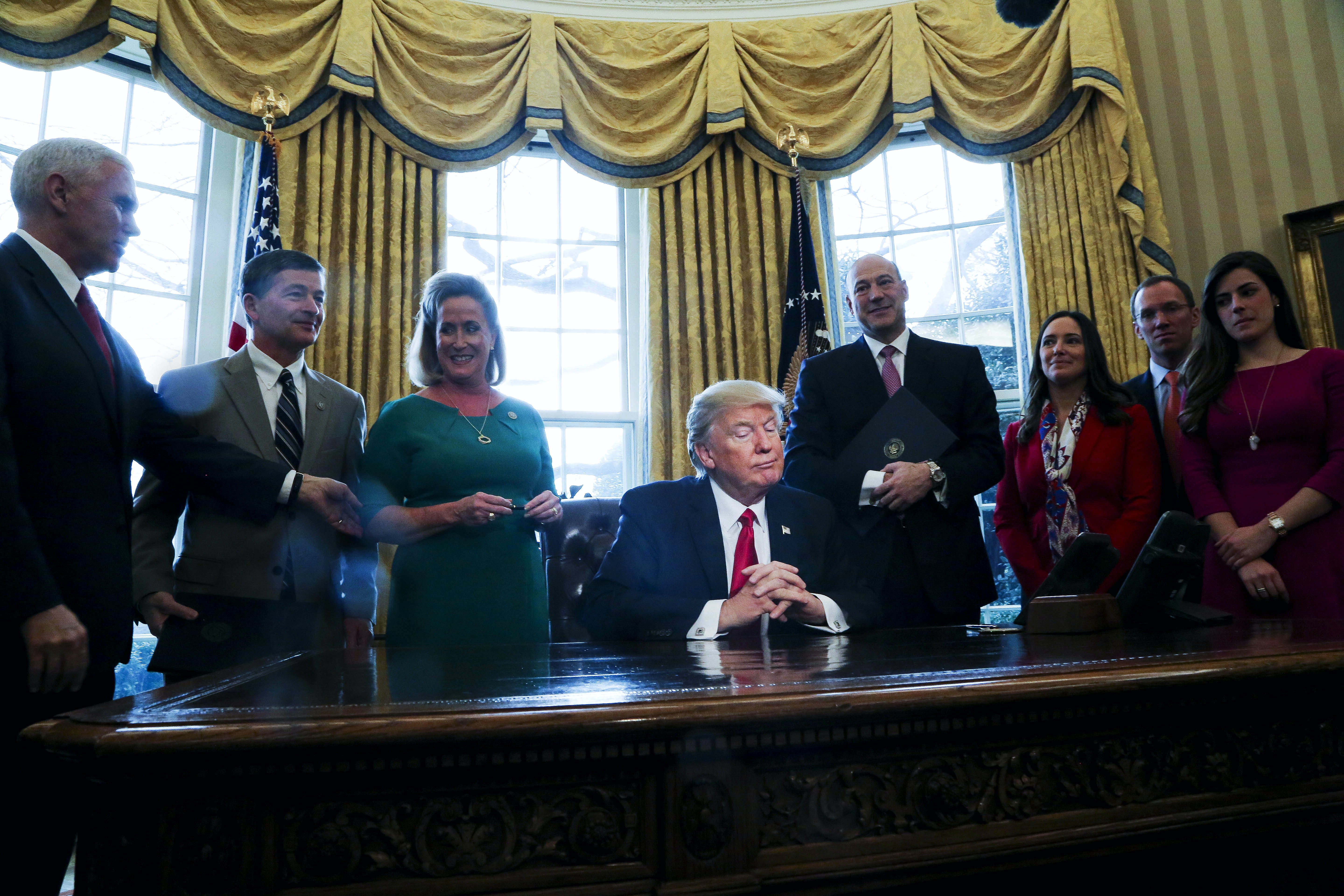 President Donald Trump pauses as he signs executive orders in the Oval Office of the White House, on Feb. 3, 2017, in Washington.

ISIS attacks have been deliberately calibrated to shock and offend the sensibilities of Western publics, a strategy that the group openly refers to as “eliminating the grayzone” of coexistence between societies. Many 19th- and 20th-century revolutionary movements were also led by small, militant vanguards that used violence and provocation to help advance their political programs. In their time, these movements achieved real tactical successes. And even today, despite widespread public war-weariness in the United States, ISIS has accomplished its goal of dragging American troops back into armed conflicts in Iraq and Syria that show little sign of abating.

After a series of improbable successes, the radical right-wing vanguard of U.S. politics has now taken control of the government, along with the most powerful military on the planet. In its enthusiasm for civilizational war, it is just the enemy that a group like the Islamic State needs to help validate its desperate and fanatical narrative.

An early example of the kind of harm that the Trump administration can do came in the form of the first special operations forces raid authorized by Trump after his inauguration. In that operation — reportedly promoted to him over dinner with his advisers — a total of 25 civilians were reportedly killed, including nine children under the age of 13. Among those killed was an 8-year-old U.S. citizen, Nawar al-Awlaki, the daughter of deceased al Qaeda proselytizer Anwar al-Awlaki. Images of Awlaki’s daughter and other victims of the raid were broadcast around the world, fueling widespread outrage.

Days later, the Yemeni branch of al Qaeda publicly denounced Trump for carrying out a “massacre” of civilians. The group promised vengeance, saying that global outrage over the deaths meant that “the flame of jihad has ignited and reached all over the world.”

While that may be an overstatement, it is not hard to see how a cycle of tit-for-tat violence, already tacitly established since the start of the war on terror, could accelerate dramatically under an administration that actively seeks to escalate conflict. Where President Obama sought to calm public fears in the aftermath of ISIS attacks, Trump and his administration will undoubtedly seek to inflame them for political gain. It’s only a matter of time before such an attack occurs, and Trump’s reaction could have consequences that quickly spiral out of control.

In his memoirs, published after his suicide in 1942, the exiled Austrian Jewish writer Stefan Zweig described his feelings of despair upon realizing that a “tiny but loud-mouthed party of German Nationalists” had succeeded in seizing power and dragging humanity into a global conflict it had neither wanted or expected. “The personal cause to which I had lent the force of my convictions, the peaceful union of Europe, had been wrecked,” Zweig lamented. “What I feared more than my own death, war waged by everyone against everyone else, had been unleashed for the second time.”

Seven decades after Zweig penned these words, small, well-organized groups of right-wing radicals are once again ascendant across the world. The best hope to stop them may be the popular opposition movements that have begun to stir in the United States. But most importantly, it will take a rejection of the logic of revenge and collective blame on both sides to prevent the apocalyptic visions of extremists from becoming reality.

Top photo: Senior counselor to the president, Steve Bannon, arrives at the presidential inauguration at the U.S. Capitol in Washington on Jan. 20, 2017.