Executive orders signed by the president have expanded the range of individuals targeted by ICE for immigration raids and deportation. 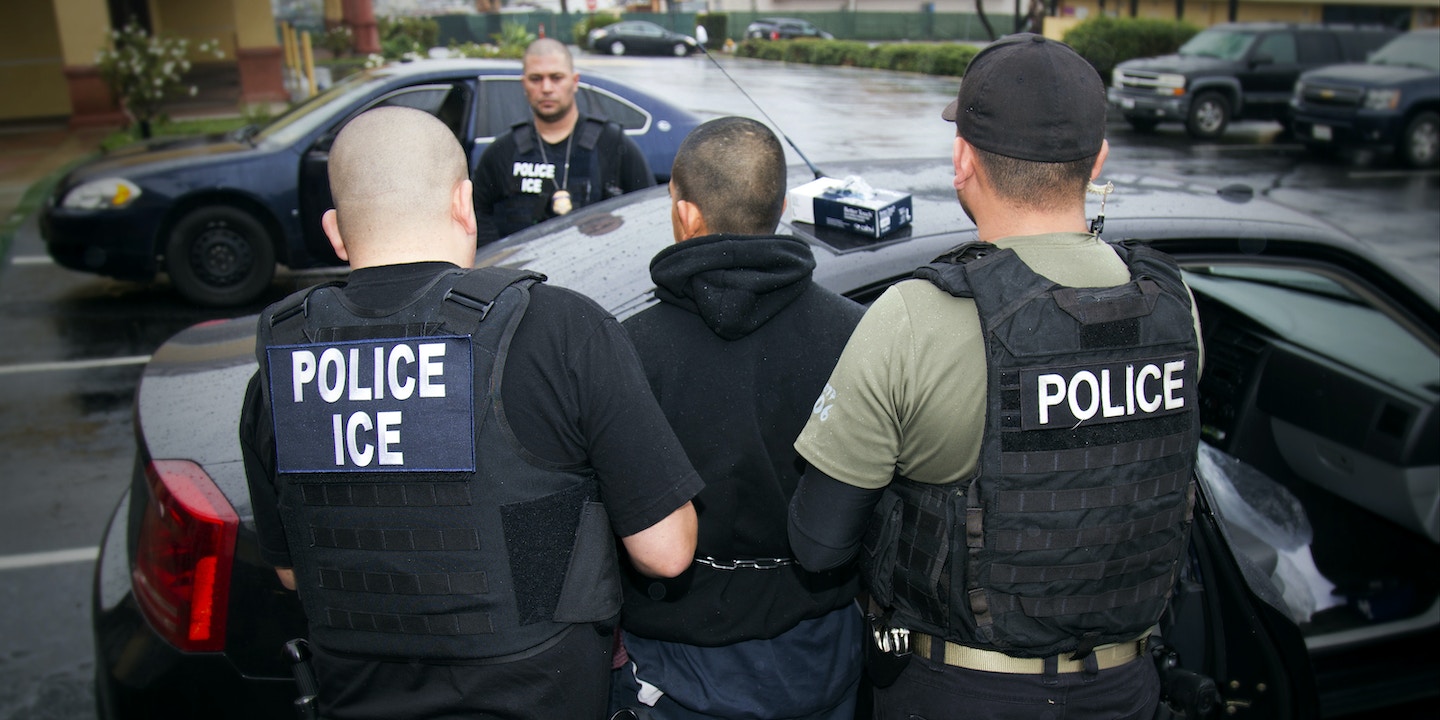 Immigrant communities across the country are coping with the fallout from the Trump administration’s first immigration crackdown — a series of operations last week in Los Angeles, Atlanta, Chicago, New York, and San Antonio that led to more than 680 arrests, according to figures released by U.S. Immigration and Customs Enforcement.

In a press release Monday afternoon, John Kelly, secretary of the Department of Homeland Security, applauded “the heroic efforts” of his agents in conducting the raids.

Critics of the operations took a different view. In interviews with The Intercept, immigration attorneys and advocates said conflicting and incomplete information provided by the government, as well as alarming, sometimes panicked reports from community members, resulted in a weekend marked by confusion, despair, and dread.

“The level of terror and fear in the community is very real,” Cristina Jimenez, executive director of United We Dream, one the nation’s leading immigrant advocacy organizations, told The Intercept.

For some, the operations recalled the darkest days and worst practices of immigration enforcement under past administrations. For others, it felt like a chilling preview of the years to come. For many, it was both.

ICE’s so-called targeted enforcement operations are not new; both the Bush and Obama administrations relied on such operations to deport thousands of people over the last decade. What is new, advocates say, is that the raids are now taking place under a Trump administration that has placed the removal of undocumented people at the center of its domestic policy agenda, while radically expanding the universe of individuals prioritized for deportation.

When reports of mass arrests in Southern California first began to break late last week, ICE initially refused to confirm or deny them, describing claims of more than 100 people taken into custody on Thursday as “grossly exaggerated.” On Friday, however, the agency reversed course, confirming that it had in fact arrested 160 people in the Los Angeles area, in addition to hundreds of others swept up in multiple southern states. Confirmation of arrests in New York and other states trickled out in the days that followed.

In fact sheets circulated among journalists and lawyers, ICE described its operations as a weeklong initiative aimed at “immigration fugitives,” “re-entrants,” and “at-large criminal aliens.” In his statement Monday, DHS Secretary Kelly stressed that ICE’s operations took dangerous individuals off the street. At the same time, however, the DHS chief also revealed that a quarter of those arrested in the targeted operations had no criminal record, and immigration attorneys were quick to stress that the category of “criminal alien” is extremely broad and can include people whose only offenses are immigration violations.

“Of those arrested, approximately 75 percent were criminal aliens, convicted of crimes including, but not limited to, homicide, aggravated sexual abuse, sexual assault of a minor, lewd and lascivious acts with a child, indecent liberties with a minor, drug trafficking, battery, assault, DUI and weapons charges,” Kelly said.

News of the raids prompted widespread concern that ICE was kicking off the Trump administration’s ultra-hardline vision of domestic immigration enforcement.

Executive orders signed by the president have dramatically expanded the range of individuals prioritized for enforcement and deportation, putting millions of undocumented immigrants in the government’s crosshairs, including longtime residents of the U.S. with no criminal records. In order to see those directives enforced, Trump has appointed Thomas Homan, a man who has built his career around executing deportations in large numbers, as the acting head of ICE. Testifying before lawmakers last week as the raids began, Kelly said Homan’s agents had felt unable to do their jobs in recent years — “hobbled,” he said, with “hands tied behind their back” — and predicted that Trump’s aggressive orders would improve “morale” at the agency.

“President Trump has been clear in affirming the critical mission of DHS in protecting the nation and directed our department to focus on removing illegal aliens who have violated our immigration laws, with a specific focus on those who pose a threat to public safety, have been charged with criminal offenses, have committed immigration violations, or have been deported and re-entered the country illegally,” Kelly said Monday.

ICE has brushed off suggestions of political or White House-linked motivations behind the recent raids, describing last week’s operations as business as usual and entirely “routine” and pointing to multiple weeklong enforcement operations under the Obama administration that each led to thousands of arrests. But while ICE has indeed conducted similar operations for years, the president himself suggested last week’s raids were not entirely apolitical.

“The crackdown on illegal criminals is merely the keeping of my campaign promise,” Trump tweeted Sunday morning. “Gang members, drug dealers & others are being removed!”

In an effort to determine what role Trump’s recent executive order may have played in the raids, the Congressional Hispanic Caucus sent a letter to Homan on Sunday requesting a meeting with the acting ICE director, as well as a copy of an ICE memo providing agents guidance on enforcement of the president’s directives.

“Our constituents have contacted us requesting information and clarity regarding these enforcement activities as well as ICE’s interpretation of the enforcement priorities as listed in the Executive Order,” the letter read. “As you are well aware, these priorities are vast enough to label any undocumented individual as a ‘priority’ for removal. We understand that ICE has provided clarifying guidance on this Order in the form of a memo. It is critical that our constituents have clarity on ICE operations and we request a copy of this memo. Without this guidance, our communities will be paralyzed as students will remain home from school, parents will be afraid to leave children alone and our local economies will be irreparably damaged.”

A spokesperson for the caucus confirmed to The Intercept that ICE responded to the letter and that a meeting with Homan has been scheduled for Tuesday. The guidance memo, however, has not yet been released to lawmakers.

According to advocates, the majority of last week’s arrests occurred in or around homes. In a phone call with reporters over the weekend, Carlos Vargas, a member of the legal team for the immigrant advocacy group Make the Road New York, detailed five arrests that took place on Staten Island.

One of the arrests, Vargas said, involved a father leaving for work at 5:30 a.m. “He was approached by two plainclothes officers. They asked him for his ID and they showed him a few pictures of people they were looking for,” Vargas said. “Once he gave his ID, they identified themselves as ICE and he was detained.” A second arrest Vargas described occurred at a home at 4 a.m. “A family was sleeping, the kids were woken up by a loud noise,” he said. According to Vargas, the ICE agents at the door falsely identified themselves as police. “Once the door was open, they rushed in,” he said. 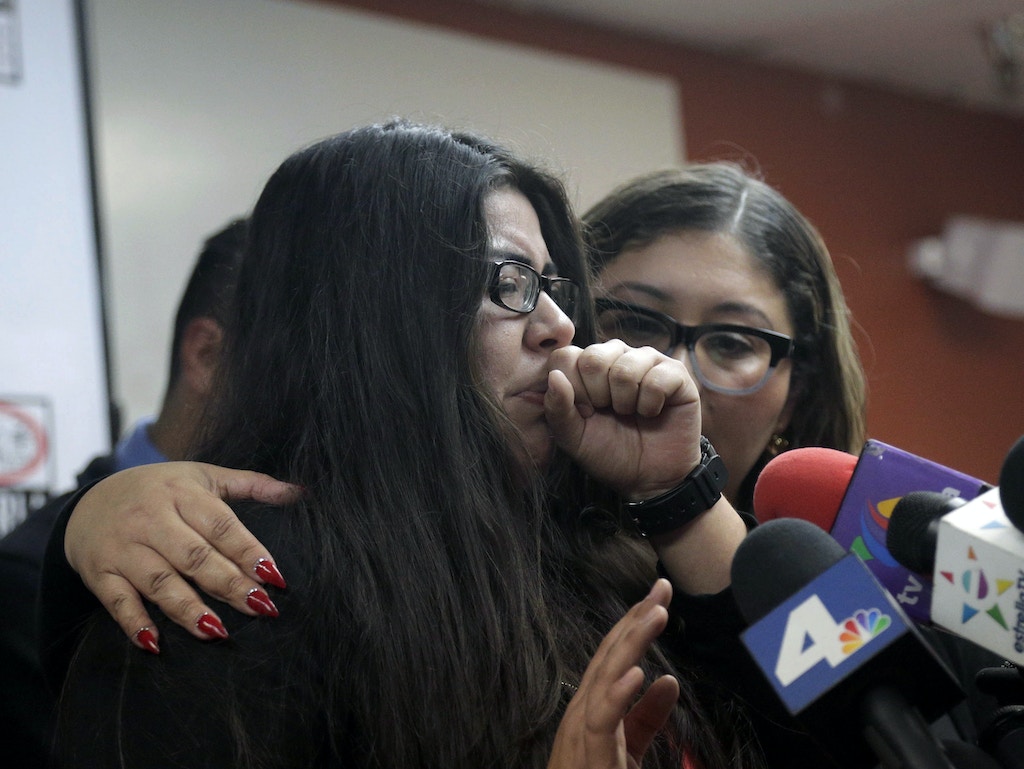 Marlene Mosqueda, left, whose father was arrested by ICE early Friday morning to be deported, is comforted at a news conference by her attorney Karla Navarrette at the Coalition for Humane Immigrant Rights of Los Angeles on Feb. 10, 2017.

It was not immediately clear if all of the arrests Vargas described were part of ICE’s targeted enforcement operations — at least one of the arrests appears to have occurred ahead of the broader set of raids. The tactics Vargas described, however, including the use of photo line-ups, false identification as other branches of law enforcement, and early morning initiation, are consistent with past ICE operations.

The modern incarnation of ICE raids began more than a decade ago, with the post-9/11 establishment of the Department of Homeland Security. Across two administrations, immigration attorneys and advocates have tracked and challenged the immigration agency’s domestic enforcement operations.

Last month, the New York City-based Immigrant Defense Project, in partnership with the Center for Constitutional Rights, published an expansive report detailing patterns and practices of ICE raids revealed through years of litigation and freedom of information requests. Described as a “toolkit” intended to “help advocates prepare for fighting back against ICE raids under a Trump administration,” the more than 200-page document traces the bipartisan history of ICE’s controversial operations, revealing who ICE agents have historically targeted, how they find their targets, and the tactics agents use to make arrests, including the agency’s well-documented reliance on deception, surveillance, and physical force.

Mizue Aizeki, deputy director of the Immigrant Defense Project and a co-author of the report, told The Intercept that “While previous administrations have modified ICE tactics in response to litigation and political pressure, ICE has consistently demonstrated an indifference to constitutional rights and disinterest in internal accountability for misconduct.”

“Typically ICE will go to people’s homes in the early hours of the morning, using SWAT-like tactics,” Aizeki explained. “They refuse to identify themselves or use deception, like claiming to be ‘police,’ in order to get into people’s homes or find the person they are looking for. They also conduct widespread surveillance to target the individual, sometimes arresting people on the street or at courthouses.” Under the Trump administration, Aizeki said she and her colleagues “expect ICE to continue or even increase its past abusive tactics — including excessive use of force, disregard for the presence of children, large-scale raids, and increased federal prosecutions.”

The raids themselves, Aizeki added, are part of a broader expansion of militarized policing in the name of homeland security that has disproportionately targeted certain communities more than others. That, combined with the administration’s willingness to describe wide-ranging groups as criminals, makes for a dangerous combination, she argued.

“By throwing around the label of ‘criminal,’ the Trump administration will continue to exacerbate the harms caused by the extensive criminalization of communities of color — including racialized policing, discriminatory prosecution, ruthless sentencing, and mass imprisonment,” she said.

ICE operations last week left many advocates scrambling to discern facts from rumors, and to educate rattled communities without fanning fear or hysteria. Fahd Ahmed, executive director of Desis Rising Up and Moving, a grassroots New York City-based immigrant advocacy organization, said the uncertainty that accompanies such operations often has lasting effects in the communities they target.

“There’s day laborers who don’t go to work, who are barely sort of living day to day, and if they don’t go to work for two days, they are going to take on riskier jobs the following days in order to make up for the money they lost,” Ahmed told The Intercept.

Still, advocates were careful to point out that any anxiety created by the raids was squarely the result of actions taken by ICE. “We are not inducing panic. ICE is inducing panic,” Jimenez, of United We Dream, explained. “Community organizers like myself, we would rather not be in rapid response responding to calls of people in fear and desperation that they’re seeing ICE vans around their neighborhood, but we are having to respond to this.”