What Did @realDonaldTrump Know About Russia and When Did Donald Trump Know It?

Updated, 5:40 p.m. Donald Trump dodged a question about contacts between his ousted national security adviser, Michael Flynn, and Russia, but one of his own tweets hints at an answer. 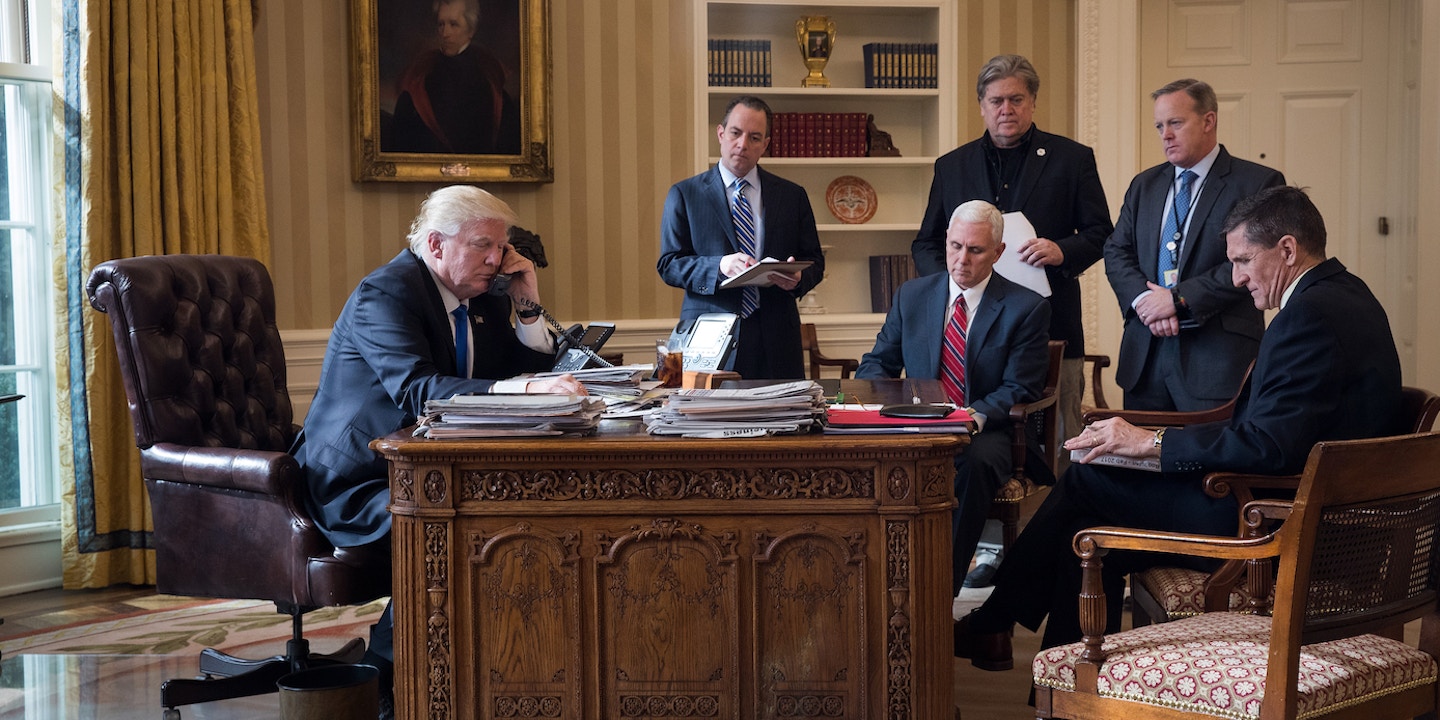 Two important questions remain unanswered following the late-night resignation of Donald Trump’s national security adviser, Michael Flynn: What did the president know and when did he know it?

Flynn stepped down on Monday night, days after nine current and former U.S. intelligence and law enforcement officials told the Washington Post that there was proof — in the form of intercepted phone calls — that he had lied to the public and to Vice President Mike Pence when he said that he had not discussed new sanctions imposed on Russia for election-related hacking in five conversations with Russian Ambassador Sergey Kislyak on December 29.

But Flynn’s claim in his resignation letter — that he had “inadvertently briefed the vice president-elect and others with incomplete information regarding my phone calls with the Russian ambassador” — made no mention of what Trump, at that time the president-elect, knew of the calls.

Looking back at one of Trump’s own tweets, which he posted on December 30 — the day after Flynn secretly urged Russia not to respond to the Obama administration’s new sanctions — makes it hard not to wonder if he knew about his aide’s effort to convince Russian President Vladimir Putin to delay.

Great move on delay (by V. Putin) - I always knew he was very smart!

Putin’s decision not to respond to the new sanctions reportedly surprised intelligence officials and led them to look more closely at their surveillance of the Russian ambassador’s communications, including his intercepted talks with Flynn. But Trump’s tweet suggests that it might not have surprised him.

Another new revelation — that Trump’s White House was warned late last month by Sally Yates, then the acting attorney general, that Flynn had lied about the content of his talks with the Russian ambassador — seems to suggest that Trump was feigning surprise on Friday when he was asked about reports that his aide had talked about sanctions.

In an appearance on Good Morning America on Tuesday, Kellyanne Conway made it clear that the White House did not want to answer questions about when Trump knew that Flynn had discussed sanctions with the Russians.

WATCH: "I do not know that, @GStephanopoulos." - @KellyannePolls on if Pres. Trump was told General Flynn was compromised 3 weeks ago pic.twitter.com/GKqOK3r5NZ

Following Flynn’s resignation, demands for answers as to who authorized his outreach to the Russians came from senior Democrats in Congress, including Reps. Adam Schiff of the House Intelligence Committee, John Conyers Jr. of the House Judiciary Committee, and Elijah Cummings of the House Committee on Oversight and Government Reform.

While the Republicans who run those committees seem to have little interest in investigating Trump’s White House, Flynn could soon be compelled to testify under oath about who knew of his contacts with Russia by Republican senators who want to investigate Russian efforts to help Trump’s campaign, including Marco Rubio, John McCain, Lindsey Graham and Roy Blunt.

Senator @LindseyGrahamSC & I are committed to getting to the bottom of Russia's interference in our election https://t.co/MLSGCZQDQi

Sen Blunt (R-MO): "I think its likely General Flynn will at some point be asked to come and talk to the (Intel) Cmte..."

“Gen. Flynn’s resignation is a troubling indication of the dysfunction of the current national security apparatus,” McCain said in a statement on Tuesday morning.

Elizabeth Warren and Ron Wyden, a Democratic member of the Senate Intelligence Committee, also called for more answers from the White House.

Congress must pull its head out of the sand and launch a real, bipartisan, transparent inquiry into Russia. Our natl security is at stake.

“The resignation of Michael Flynn, while necessary and appropriate, must not be the end of tough questions about Trump associates’ ties to Russia,” Wyden said.

Kurt Bardella, a former spokesman for the Republican-led House oversight committee, also criticized the current panel for failing to do its job.

For his part, Trump’s only public comment on the matter was an attempt to divert attention away from the question of whether he had directed his aide to conduct diplomacy with Russia before he was sworn in — to his annoyance at the fact that evidence of Flynn’s lie had been made public.

Later on Tuesday, Sean Spicer, the White House press secretary, denied that Trump had instructed Flynn to discuss the new sanctions on Russia with the Russian ambassador in his flurry of calls on Dec. 29.

Spicer: The President "absolutely" did not instruct Flynn to discuss sanctions with Russia https://t.co/74fNzZ9aXw

Spicer also said that Trump did not know that Flynn had talked about sanctions with the Russian diplomat until he was briefed about it on Jan. 26, when the acting attorney general informed his lawyer, White House counsel Don McGahn, that Flynn had done so. That same day, Spicer said, McGahn “immediately” briefed Trump on the contradiction between Flynn’s public statements, and his description of the calls to Pence, and the transcripts of the recorded calls.

Despite that claim, given the heightened tensions between the U.S. and Russia over the sanctions imposed for election-related hacking, it would seem bizarre for Flynn to have discussed the issue the very day that they were imposed without reporting back to Trump on a subject he was engaged enough to tweet about the next day.

Later on Tuesday, NBC reported that the vice president was not informed until Feb. 9 about the warning from the acting attorney general that Flynn had, in fact, discussed sanctions with the Russian ambassador. That was the same day that The Washington Post made that fact public.

Pence finally learned of DOJ re Flynn warning because of pending @washingtonpost report that would have cast doubt on his honesty re Flynn https://t.co/Lm59H88zaw

The New York Times revealed that Flynn was interviewed by the F.B.I. last month over his contacts with Russian officials. While it was not clear what, exactly, he said, “investigators believed that Mr. Flynn was not entirely forthcoming,” The Times reported.

The F.B.I. does not believe Flynn was entirely forthcoming when he spoke to agents about the call https://t.co/CQ2pcfoAnL

If Flynn lied to federal investigators, he could be charged with a felony.