While the Senate was holding votes on Scott Pruitt, climate scientists gathered in Atlanta to defy the Trump administration’s climate denialism. The Senate voted to confirm Donald Trump’s pick for administrator of the Environmental Protection Agency today over the objections of Democratic senators, hundreds of former EPA officials, and hundreds of current EPA employees. Although an Oklahoma judge had ruled on Thursday that Pruitt’s office had to release more than 2,500 emails he had exchanged with energy and gas companies and industry groups, Republicans crammed through his confirmation in a 52-46 vote (with Democrats Joe Manchin and Heidi Heitkamp voting with the Republican majority) before anyone had a chance to review the emails exchanged with the companies he’s now in charge of regulating.

Meanwhile, on Thursday, while Republicans in Washington were holding the first of two votes to confirm an EPA chief who will roll back regulations on the oil and gas companies responsible for most global warming, hundreds of climate scientists gathered in Atlanta to talk about the way climate change is already sickening and killing people around the country and the world.

The Climate and Health Meeting, which was organized in January after the CDC cancelled a similar conference, was far from being a litany of the gloom and doom predictions and statistics that you might expect from the scientists studying increases in temperature, rising sea levels, and extreme weather. Those things were present, of course, summed up perhaps most frighteningly by former Vice President Al Gore, the meeting’s host, who noted that humans emit 110 million tons of global warming pollution into the atmosphere every 24 hours ­­­­— and that the heat energy trapped by this daily dump is the equivalent of “exploding 400,000 Hiroshima-class atomic bombs.” Or the graph that showed how the continued release of these greenhouse gases could lead to a 12-degree temperature rise by 2300, a change that would render large swaths of the earth uninhabitable. 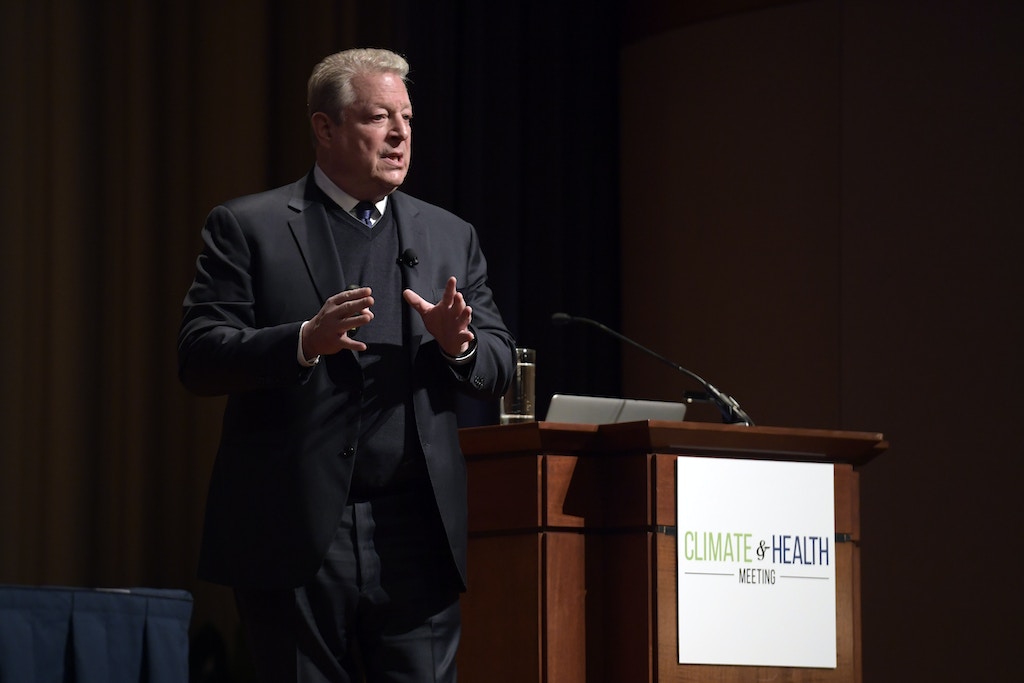 Al Gore speaks at the Climate and Health Meeting at the Carter Center on Feb. 16, 2017, in Atlanta.

Instead, the focus was on the extremes that have already happened — and, more importantly, their human consequences. Gore pointed out the parts of the world that are already on the outer limits of human habitability, a spot in Iran where the heat index hit 165 for the first time in 2015, for instance, or a town in India, where the temperature hit a record 123.8 degrees last year. He showed people in Pakistan digging mass graves in advance of killer heat waves because they now know what to expect and traced how warmer temperatures contributed to the spread of the virus that causes dengue fever in India, where there are now 37 million infections each year.

While poor countries are being hit the hardest, the U.S. is already seeing its fair share of human casualties. Air pollution, which is worsened by heat — and produced by the same fossil fuel combustion that warms the climate — already kills 200,000 Americans each year and costs the country almost 4 percent of GDP in 2010. Two-thirds of water-borne disease outbreaks in the U.S. are set off by extreme weather events. We saw pictures of refrigerator trucks for bodies that couldn’t fit into the morgue after a Chicago heat wave, elderly people felled by heat stress in the American Southwest, and children forced to carry around backpacks of emergency asthma supplies for their heat-exacerbated asthma.

In what was may have been the saddest presentation in a day of sad presentations, psychiatrist Lise Van Susteren described the mental health consequences of climate change on children, telling of kids suffering from clinical anxiety about the climate and the particular difficulty of reckoning with human-caused crises. “What happens from intentional negligence is harder to put behind us,” she explained. Van Susteren predicted that children, as they grow older, will experience their parents’ “destructive inaction on climate” as child abuse.

If the unsparing presentations about the mounting human toll of climate change begged for “bowls of Prozac and certificates for free vasectomies,” as one scientist joked, they also reflected the recognition that past efforts to convey the urgency of climate change to voters had failed — and were partly responsible for the fact that the climate experts were presenting their calamitous news essentially in exile.

With its focus on climate reality, the meeting paid less attention to the political reality that is the biggest obstacle to addressing it. Most presenters made just the barest nods to our anti-science president who derides climate change as a hoax. Ashish Jha, director of the Harvard Global Health Institute, noted dryly that walls won’t keep out the malnutrition, diseases, and death that await us if we don’t reduce our burning fossil fuels. Oklahoma Attorney General Scott Pruitt, nominee to head the Environmental Protection Agency, testifies during his confirmation hearing before the Senate Committee on Environment and Public Works on Capitol Hill on Jan. 18, 2017.

Former President Jimmy Carter, who made the Carter Center available for the conference, was also restrained, referring only obliquely to “this last election.” At the same time that the victor of that last election was signing a bill that will reverse protections on waterways from coal mining ash, Carter, who has devoted his life to humanitarian causes, was talking about the impact of climate change on “the lives of the poorest people on earth.” Carter acknowledged his relative freedom to speak his mind on the subject, noting, “I have secret service protection the rest of my life.”

The few representatives of the CDC who attended the meeting were more constrained. Only about 12 staff members from the federal agency originally slated to host the conference were in attendance, according to CDC Spokesperson Bernadette Burden. And many of them were using personal or vacation time to be there, exercising “their right to attend as private citizens,” as Burden put it.

George Luber, a CDC epidemiologist who attended the meeting in an official capacity, gave a clear presentation showing the agency’s efforts to prepare cities and states for the health changes brought by climate change. The program helps project local disease burdens, draft response plans, and develop “the best science so we can make the best decisions,” Luber said.

What was less obvious was whether that government work will continue under the new administration. “No one knows what will happen,” said Julia Gold, who manages the Rhode Island’s climate change program, which is funded by a grant from the CDC.

Patrick Breysse, director of the CDC’s National Center for Environmental Health, of which the Climate and Health program is part, told me he’s confident the agency’s health-focused work will continue. While there may be disagreement over the root causes of climate change, Breysse said, “The good news is that people generally agree that there are increasing temperatures, more wildfires.” He even expressed hope that the agency would reschedule its climate meeting, but was unable to say when that might happen.

As government scientists find themselves less able to communicate about the environmental disaster to which they’ve devoted their professional lives, those free to speak are trying to figure out how to rectify the communications failures that have cast them politically powerless. Climate change used to be understood mostly as a problem of the planet and the endangered species on it. But this meeting made it clear that the emphasis will no longer be on shrinking habitats or abstract graphs with lines pointing off into the distant future. However poignant, the plight of the polar bear is out.

In its place, we’ll be seeing images of kids like Will, a 7-year-old in Texas, who is now forced to wear a cooling vest because of a medical condition that makes him particularly susceptible to heat and to stay inside on the increasing number of very hot days in his hometown in Texas.

The best strategy, according to Ed Maibach of the Center for Climate Change Communication at George Mason University, is to keep the message simple — that climate change is real and — if we cut back on fossil-fuel use — reversible.

Maibach, who has divided the American public into six categories according to their beliefs about climate change, presented perhaps the most encouraging message of the event: that much of the country is open to learning about climate change.  The good news, according to Maibach, is that only 9 percent of the country are “dismissers,” the most ideologically extreme end of the spectrum who are dead-set against recognizing the reality of climate change. The bad news is that that many of them are now leading our government.

Top photo: The Climate and Health Meeting is held at the Carter Center on Feb. 16, 2017, in Atlanta.