A “Swedish Defense and National Security Advisor” interviewed by Bill O’Reilly of Fox News this week turns out to be entirely unknown in his native country. 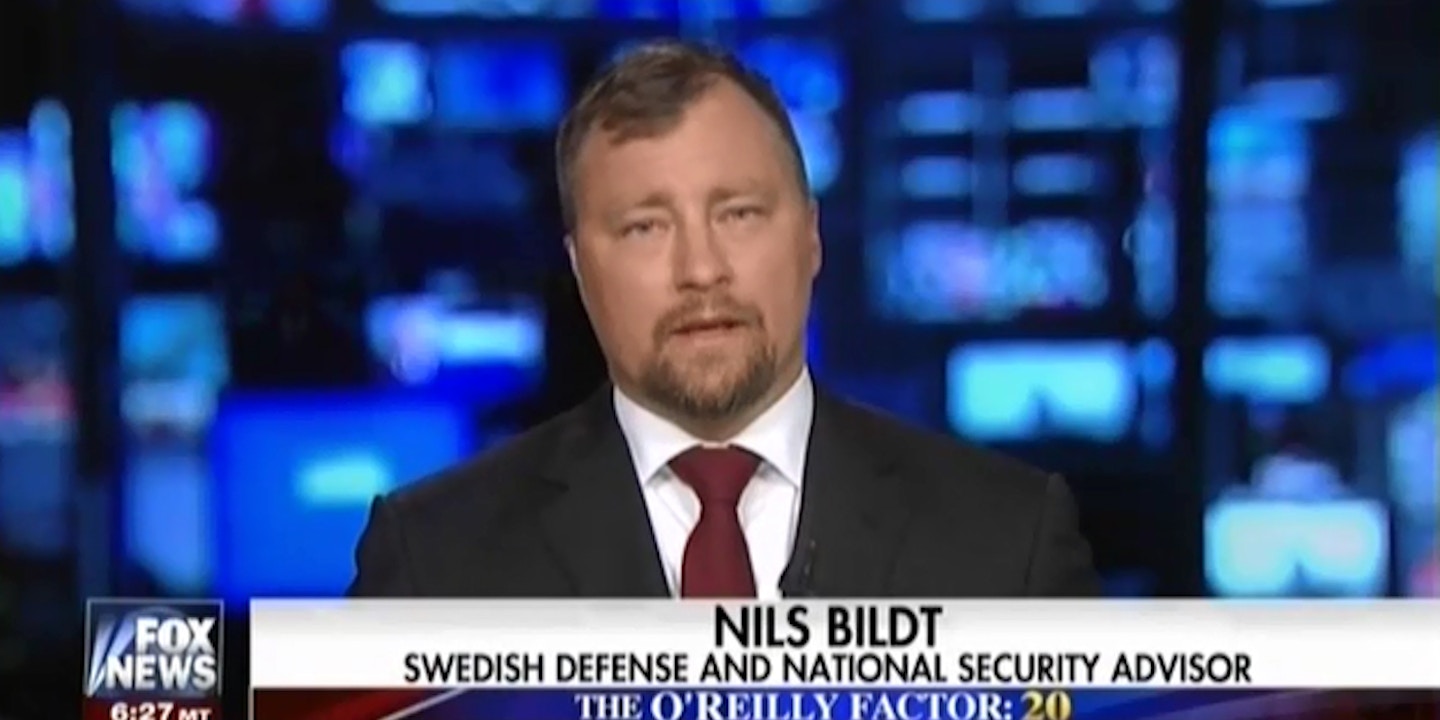 A man interviewed by Bill O’Reilly on Fox News this week, who was identified in an on-screen caption as a “Swedish Defense and National Security Advisor,” turns out to be entirely unknown in his native country, with no connections to either the nation’s defense or security services.

As the Swedish newspaper Dagens Nyheter reported on Friday, Nils Bildt, who echoed President Donald Trump’s debunked claim that immigrants from Muslim-majority nations had driven a rise in violent crime in Sweden, has no known expertise in national security, and has not lived in his homeland since 1994. Officials at the Swedish Defense Ministry and Foreign Office told the newspaper they had never heard of this “unknown Bildt.”

Fake Sweden expert on Fox News – has criminal convictions in US, no connection to Swedish security.https://t.co/AzP4eKVmXf pic.twitter.com/7Pw0m01vZm

His only claim to fame appears to be the fact that his father, Sven Tolling, is “well know in Swedish equestrian circles,” according to Dagens Nyheter. How he came to be presented by Fox News as an expert in a segment broadcast on Thursday night remains a mystery — as does why he changed his name from Tolling to Bildt after he emigrated from Sweden.

Nevertheless, when Bildt was asked by O’Reilly to respond to comments from Anne-Sofie Näslund, a U.S. correspondent for the newspaper Expressen who disputed the Fox News host’s claim that a recent rise in violent crime in Sweden was caused by an “influx” of refugees from Muslim nations, he confidently dismissed her fact-driven argument.

As Näslund noted, there is no evidence in Swedish government statistics that immigrants from Muslim majority nations (who make up all of 1.5 percent of the population) are in any way associated with the increased number of shooting deaths, which peaked at all of 33 in 2015. (The United States has more than 30,000 shooting deaths each year.)

Bildt, whose adopted last name is the same as that of Sweden’s former prime minister, Carl Bildt, a relentless critic of Donald Trump, told Dagens Nyheter by email that he is “an independent analyst based in the USA.”

We should be grateful that we haven't had a terrorist attack in Sweden since the Baader Meinhof gang blew up West German embassy in 1975.

It was a Fox News producer, Nils Bildt said, who made the decision to give him the official-sounding title of “Swedish Defense and National Security Advisor.” “I had no personal control over what title they chose,” Bildt wrote.

Näslund, who had been forced to listen to Bildt dismiss her fact-based argument out of hand, pointed out on Twitter that the Swedish immigrant to the United States who claimed that immigrants to Sweden are violent was reportedly arrested in Virginia for committing a violent crime in 2014.

Nils Bildt – the seem to be fake "Swedish defensive & national security adviser" – is convicted of a violent offence https://t.co/NQDh8ZCLwn

In his remarks to the Conservative Political Action Conference on Friday, Trump reiterated his claim that immigration from Muslim-majority countries had compromised security in Sweden, even though the Fox News segment that he cited as evidence earlier in the week was widely debunked as inaccurate in the Swedish media.

After this post was originally published, Dana Klinghoffer, a Fox News vice president for corporate communications, contacted The Intercept to ask that our report be amended to add this quote from David Tabacoff, the executive producer of Bill O’Reilly’s show: “Our booker made numerous inquiries and spoke to people who recommended Nils Bildt and after pre-interviewing him and reviewing his bio, we agreed that he would make a good guest for the topic that evening.”

Apparently, that is supposed to excuse the broadcaster for having featured a complete charlatan in prime time.

The network also asked that we add “something you can just attribute to a network rep or spokesperson.” That statement is as follows: “Bill O’Reilly will further address this on Monday night’s The O’Reilly Factor.”