Adding to the peril of politicized intelligence is the fundamental ignorance and inexperience of Trump’s inner circle. 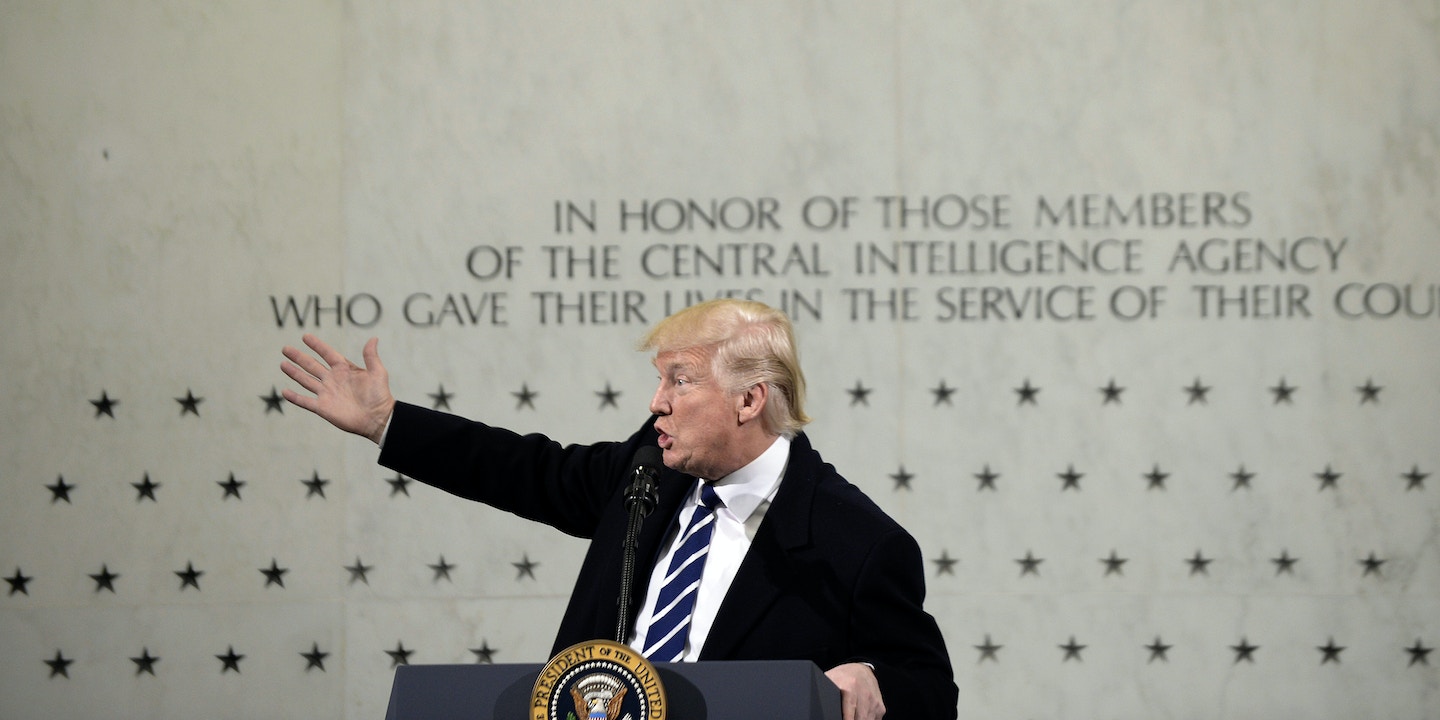 A former CIA analyst assigned to work on the Bush administration’s attempt to link Saddam Hussein and al Qaeda is warning that the Trump’s administration may be adopting the same model of “alternative intelligence” that led to the Iraq war. “They weighed false information. They also took raw reports and cherry-picked those from sources that we didn’t deem reliable, and gave those to the president,” said Nada Bakos, who worked at the CIA from 2000-2010, in an interview with Jeremy Scahill.

You can listen to the interview in the latest episode of the Intercepted podcast:

Bakos said she is concerned that the Trump administration is operating with “the expectation that you toe the line according to what they want versus the reality, the situation on the ground.” That approach will “politicize the structure of the intelligence community. So you can politicize the information that comes out, possibly develop your own team that feeds the bottom line that you’re after,” she said. “That to me is one of the more concerning underlying factors in how [Trump is] treating the intelligence community. If it’s always serving his needs and serving his view of the world, he may as well not have one.”

After 9/11, as Vice President Dick Cheney orchestrated the drive to war, Bakos was part of a CIA team charged with producing evidence to support the assertions of the administration that Iraq had an alliance with al Qaeda. “That question did not come up organically through the intelligence we were collecting,” Bakos told Jeremy Scahill in the latest episode of Intercepted. “That question came up from the administration. We weren’t seeing indicators. We wouldn’t have formed a team otherwise to evaluate this information.”

Former Secretary of Defense Donald Rumsfeld also established the Office of Special Plans in the Pentagon, which carried out an effort to extract information from across the intelligence community that supported the case for war. “Their findings were the opposite of basically what we were finding at the time,” she said. “So that in and of itself was the beginning of a backwards cart before the horse. We came to our conclusion. We delivered it to the White House, to Congress. The DOD did have a very different opinion on how they characterized relationships between Saddam and other terrorist organizations” This model of politicized intelligence— stove-piping bits of raw and unreliable reports, leads to bad information and tragic consequences.  “It led to war in this instance,” said Bakos.

In the same interview, Clint Watts, a former FBI special agent who worked on the Joint Terrorism Task Force, observed that Trump’s initial strategy has been an attempt to defang the intelligence community and “pump up the military and law enforcement community.”

I think the smarter people in the intelligence community are going to treat him like a dictator. And what do you do with a dictator? You play to his ego. So they will end up almost influencing the President like a foreign adversary, I think, that if they want to convince him of what they believe the truth or a balanced assessment for America is, they’re going to end up treating him like a Gaddafi or a Putin, or somebody that they want to appeal to. And they’re literally going to have to make their assessments with the information behind it come to terms with the president’s worldview, which is very frightening because it really sets up a lot of blind spots as well.

Watts also drew parallels with the build-up to the Iraq War and noted that the Trump administration has already begun to disregard Department of Homeland Security reports that contradict its policy agenda. “We’ve already seen this now with the DHS’s intel assessment around the [Muslim ban]. They produced a report that didn’t match up with this policy that they’re pushing. So now you see the administration say, well, I’m not going to listen to it. We’re still going to push it forward.”

“What I’m expecting them to do is start to put alternative teams out of the White House that are going to provide another competitive look at these questions, and if we see that, especially in the Department of Defense or run directly out of the National Security Council, I would have great concern,” said Watts. “That to me would signal: I don’t trust my intel agencies.”

Adding to the peril of politicized intelligence is the fundamental ignorance and inexperience of Trump’s inner circle, namely White House advisers Steve Bannon and Sebastian Gorka. “What is super scary about it to me is you’re looking at people who have got a thimble of knowledge about a lot of these groups that we’re tackling right now.” The White House is lumping Iran, the Muslim Brotherhood, al Qaeda, and ISIS together as allies right now, Watts said. “That is lunacy.” They’re creating a big enemy that they can go out and fight.

“The fact that Gorka can’t even understand that on a basic level,” Bakos added, “means that he is completely the wrong person to be looking at countering terrorism and understanding the Middle East.”

“My biggest fear,” said Watts, “is that there will be a major terrorist attack … because it will bring the country under the umbrella of the president to be tough and have to prove [himself], and the ideologues will run first because they’re more organized.”

“If I were al Qaeda or ISIS I would attack now. If I was a nation state, Russia, China, Iran, I would provoke us right now because you’d get that overreaction that they want.”

Jeremy Scahill’s interview with Nada Bakos and Clint Watts can be heard on Episode 6 of the Intercepted podcast: Donald in Wonderland.