“This theory doesn’t even make sense,” a defense lawyer said. “The government is just throwing the worst ideologies together to try and paint the worst possible picture of the defendant.” Federal prosecutors who brought terror charges last year against a Virginia man — for buying gift cards for an FBI informant — argued in court last week that Nazi memorabilia found in the man’s apartment was relevant to the case because ISIS and the Nazis share “a similarity in ideology.”

According to a transcript of the hearing, Assistant U.S. Attorney Gordon Kromberg said that the defendant, Nicholas Young, was interested in ISIS and Nazism simultaneously. As an example of historical Muslim-Nazi cooperation, Kromberg noted that Young, on Facebook, had “liked” Mufti Mohammad Amin al-Husayni, a Palestinian nationalist who supported Adolf Hitler. Last year, Israeli Prime Minister Benjamin Netanyahu caused an uproar by claiming that al-Husayni inspired the Nazi Holocaust, an allegation that was widely denounced as untrue by historians. 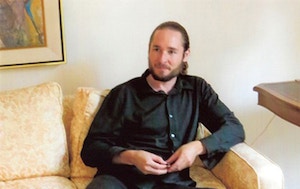 Young’s lawyer pointed out to the judge that the FBI agents who executed a search warrant on Young’s apartment initially thought they lacked the authority to seize the Nazi mementos — not seeing them as obviously relevant to a terrorism case — but that Kromberg had told them to seize the items anyway. Kromberg, for his part, has previously faced accusations in sworn affidavits by defense attorneys of anti-Muslim bias.

Young, a white 36-year-old former Washington, D.C., Metro police officer, was arrested in August and charged with material support for terrorism after a sting operation in which he agreed to send $245 worth of gift cards to an FBI informant who had been posing as a friend. The informant told Young that he had joined ISIS and needed the money to pay for mobile messaging accounts ISIS could use to recruit Westerners. A number of weapons were seized from Young’s home after his arrest, which he appeared to have owned legally as part of his work as a police officer.

According to the FBI’s own criminal complaint, Young had previously tried to dissuade the informant in his case from joining ISIS. But at least since his 2011 trip to Libya, the bureau had been watching Young’s erratic behavior and alarming social media chatter and waiting for him to do something illegal.

Young’s lawyer, Nicholas Smith, argued that if FBI agents had considered Young an actual threat, they never would have let him continue working as a police officer and carrying firearms for more than five years. And despite the terror charge he now faces, Young is not alleged to have been planning to actually conduct any acts of violence.

A search warrant executed at his home after his arrest turned up a number of items of historical Nazi paraphernalia, a Confederate flag, and an old photo of Young dressed in a Nazi uniform. His family and lawyers say that Young had been part of a historical re-enactment group for many years and had historical items and uniforms from a number of different armies and conflicts.

In the March 10 hearing before federal District Court Judge Judge Leonie M. Brinkema, Kromberg introduced seized items including the Confederate flag, Ku Klux Klan literature, and historical books about the Nazis that were found in Young’s home, along with two pictures of Young — dressed as a Nazi in one, and in “Muslim garb” in the other — taken within five days of each other 11 years ago, in 2006.

“So there’s not only a similarity in ideology about certain parts of the ideology, but chronologically, this was happening at the very same time,” Kromberg insisted.

Ashley Young, the defendant’s sister, said her brother had been in possession of a large amount of documents and paraphernalia from many different periods of history. “He had done Vietnam War re-enactments in addition to World War II and had been a member of a re-enactment group for many years,” Ashley Young said. “He has boxes full of books and items from different wars in history but they only focused on the Nazi stuff.”

Kromberg called attention to a social media account allegedly operated by Young that made positive comments about ISIS under the pseudonym of a German SS storm trooper named Klaus Dusselkamp. And he even cited an anonymous social media commenter who had referred to Young as “Muslim-Nazi scum.”

“Now, whether or not that’s true, I don’t know the answer to that,” Kromberg said. “But the point is that the Nazi stuff in this case is very much related to the, to the ISIS stuff.” During the hearing a number of documents from Young’s computer were produced, including a poster for “The Worldwide Association of Islamists and Nazis.”

At issue was a defense motion to suppress various items the defense argued were unconstitutionally seized from Young’s residence because they had no relevance to the charged crime — which had to do with the provision of gift cards — and were therefore not responsive to the search warrant.

Prosecutors in terrorism cases have often been criticized for attempting to include information like books and images to draw spurious connections between defendants and publicly loathed causes and groups. Social media activity, including Facebook “likes,” is often deemed relevant by prosecutors in sting cases when seeking to prove that a defendant was predisposed to support terrorism.

But a 2014 Human Rights Watch report condemned “prosecutorial tactics that may violate fair trial rights, such as introducing … inflammatory evidence about terrorism in which defendants played no part.”

Iman Boukadoum, a defense lawyer in past national security cases, said that the attempt by prosecutors to make an ISIS-Nazi connection in this case is absurd — but unsurprising. “Because the material support statute is so broad, prosecutors often use very thinly substantiated acts or statements to associate defendants with terrorist activity,” she said.

“Nazis obviously want to kill Muslims and they hate Muslims. This theory doesn’t even make sense,” Boukadoum said. “The government is just throwing the worst ideologies together to try and paint the worst possible picture of the defendant.”

Kromberg has come under criticism in the past for allegedly harboring personal prejudice against Muslim defendants in his cases. A 2008 Washington Post story cited him for a number of controversial statements he allegedly made in the past, including mocking the torture of a defendant and criticizing “the Islamization of the American justice system.”

The FBI has come under frequent criticism for using elaborate stings to build high-profile terrorism cases against individuals who seemed to have little inclination or ability to carry out acts of violence on their own. Some involve indigent or mentally ill people goaded into agreeing to acts of violence; others include people who are coaxed into committing illegal acts under broadly defined terrorism statutes. There are estimated to be as many as 15,000 FBI informants currently operating around the country, many of whom are working on terrorism cases.

Following the hearing, Judge Brinkema — who had made it clear from the outset that she had no patience with the defense’s argument — accepted Kromberg’s view that the items seized by the FBI were relevant and responsive to the search warrant. “Whether or not the American Nazi party is officially designated as a terrorist organization there certainly is enough evidence in my view to find that it would be reasonable to deem it to be sufficiently terroristic in its orientation and philosophy,” she said.

Defense lawyers will still have a chance before trial to argue that the items seized under the warrant should be excluded as prejudicial.

Young’s sister said she fears that prosecutors are planning to selectively use images and documents in her brother’s possession. “There were things in drawers that were favorable to the Allies and the other sides of the conflict,” she said. “To claim that my brother is an ISIS supporter and a Nazi is outrageous.”

Top photo: Ashley Young, center, walks away after a status hearing for her brother, Nicholas Young, on Aug. 3, 2016, at the Albert V. Bryan United States Courthouse in Alexandria, Va.